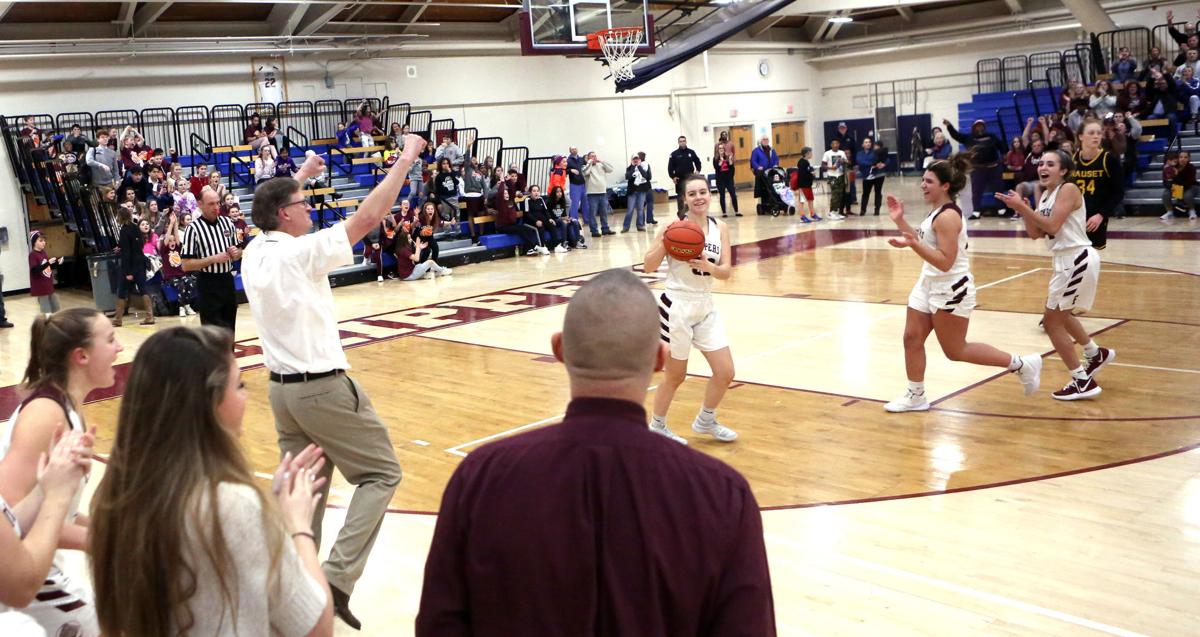 Falmouth Coach Bob Buscher leads the celebration onto the court as time expired in Falmouth's 52-45 win over rival Nauset on Friday night. 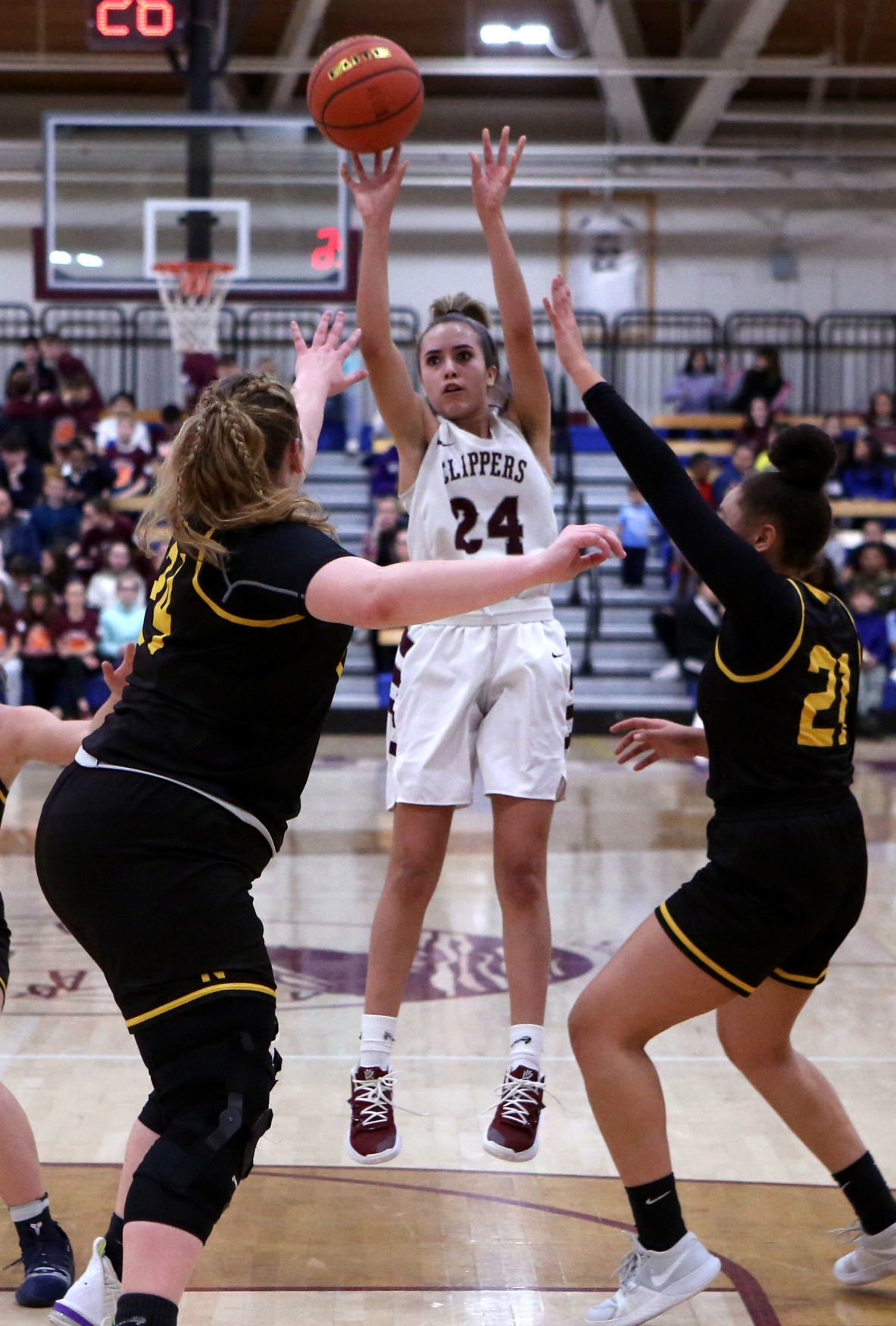 Falmouth Coach Bob Buscher leads the celebration onto the court as time expired in Falmouth's 52-45 win over rival Nauset on Friday night.

Tonight, February 7, the Falmouth High School girls’ basketball team will get a chance to avenge one of their three losses of the season when they visit Barnstable. More important than just getting back at their rivals, the Clippers have a chance to knock BHS out of contention for the Cape and Islands championship, and put themselves squarely in the driver’s seat for the first-ever league crown.

With a 13-3 overall record, and 8-1 league record, FHS can deliver the Red Raiders their third loss in league play. If Falmouth were to lose there would be a three-way tie atop the league standings between the Clippers, Raiders and Nauset Warriors. Falmouth swept the season series with Nauset, while the Warriors won both games they had against Barnstable.

Barnstable won the first game against FHS a few weeks back by one point, 32-31. That game came less than 24 hours after Falmouth had played a talented Old Rochester team into overtime, winning that one in come-from-behind fashion.

FHS put itself in this position with an easy win against Nantucket High School Tuesday, February 4. The Clippers established a big lead in the opening quarter and cruised to the finish line as they won by a 51-28 score.

The game was basically over after eight minutes of play. Falmouth ran out to a 20-2 lead at the end of one quarter as they dropped in three three-pointers and moved the ball fluidly in the offensive end. All-Star and recent 1,000-point scorer Kayla Thomas netted six of her 10 points in the period, with Ari Silvia scoring five of her 15 in the first. Anya Thomas scored all five of her points in the opening quarter and Lily Craft had four.

Nantucket was never closer than 15 points of FHS the rest of the way. FHS led 26-9 at the half and it was 41-18 after three quarters.

Nauset High knew that it would have to find a way to slow down Kayla Thomas. Handling Ari Silvia was also high on their list of priorities.

What the Warriors did not count on was that junior forward Lily Craft would step up and have the best game of her career on Friday night, January 31.

Craft scored 12 points in the second half on her way to a career-high 16 to lead the Clippers to a huge home win over Nauset High, 52-45.

With Thomas carrying the load in the first half, and Silvia playing a strong all-around game, the Clippers’ three-headed monster combined for 50 fo the team’s 52 points in their key Cape and Islands League win, one that puts them in the driver’s seat for the league title. Falmouth is now 13-3 overall and 7-1 in league play.

FHS entered the fourth quarter down by five points as the Warriors impressive size—NHS featured four six-footers on the floor at nearly all times—was able to pound the ball inside in the third quarter to give them a 41-36 lead.

Craft then put on a show to start the fourth quarter. The cousin of one of Falmouth’s all-time best players, Kim Craft, put on a display that her kin would have been quite proud of as she opened the period with a huge three-pointer. FHS then tied the game seconds later when Kayla Thomas pulled down a defensive rebound and heaved the ball ahead to Silvia for a fast-break bucket that tied the score at 41. Craft then put FHS ahead with 4:23 left in the game with another long jump shot to give FHS a 43-41 lead. They never trailed again after that.

“It was whatever was available at the time, whatever presented itself,” Craft said. “I knew that the opportunity was there because of their size, and their athletic ability... (their size) presents a lot of problems, but nothing that we couldn’t overcome.”

Down the stretch the game took on a back-and-forth pace, with the Clippers able to remain a step ahead as they were rooted on by a huge crowd that was buoyed by a Morse Pond School event. Rachelle Andrade pushed the lead to four as the smallest player on the court hit a shot over the trees down low for the Clippers. It was the only basket by an FHS player not named Thomas, Craft or Silvia in the game.

With just over two minutes to play Craft drove hard to the basket to extend the Clippers lead to five points, but then Skeyeler Sandison canned a long three for the Warriors that cut Falmouth’s lead to two. With the Warriors bench jumping for joy, the Clippers silenced their rivals with an immediate answer thanks to a drive to the bucket by Thomas to make it 49-45. A free throw by Silvia with 1:28 to go pushed the lead to five and then she iced the win, after a defensive stop, with two more free throws.

“I expected it to be a lot harder game because we did beat them so bad last time. We expected them to come back harder,” Craft said. “We reacted well.”

Coach Bob Buscher said that Craft was a difference-maker in the big rivalry tilt.

“She kept us in the game,” the coach said. “Kayla wasn’t shooting well (in the second half), and then Ari came alive, but Lily saved our bacon against a really tough defense... she stepped up and she deserves it.”