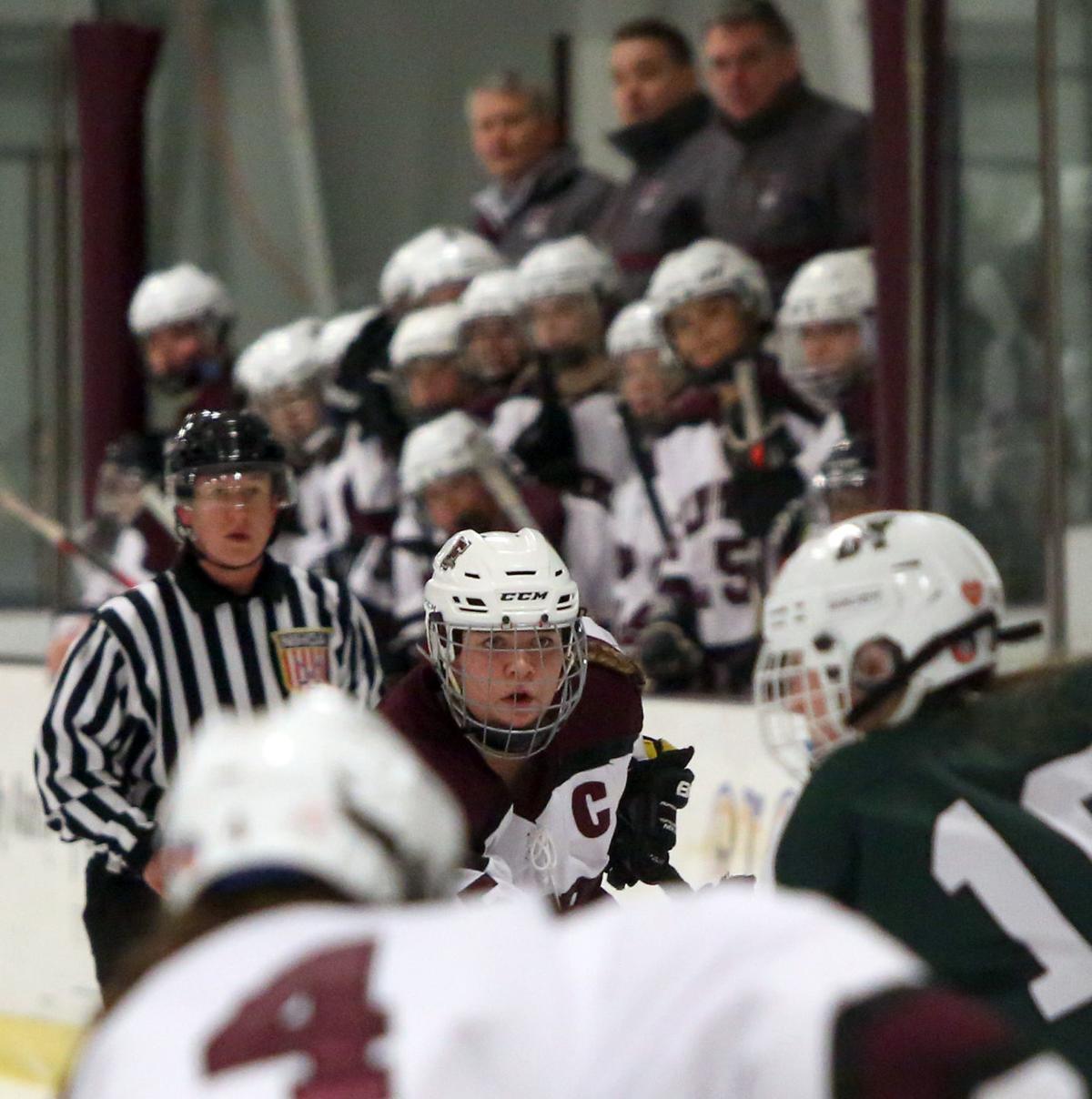 Falmouth captain Cate Brodie surveys the play in front of her. The defenseman helped lead a strong defensive effort in an overtime win against D-Y.

Freshman defenseman Abby McDonald fights for the puck against Dennis-Yarmouth during the Clippers’ 2-1 overtime win against the Dolphins.

Dennis-Yarmouth and Falmouth High School are not only considered contenders for the Cape and Islands championship, but the two squads are also amongst the top-ranked teams in the Division 2 state polls. On Wednesday, January 22, the two foes squared off for the first time this year and the game was as good as advertised.

Falmouth rallied from a 1-0 deficit to tie the score in the third period at 1-1, which is where things stood after regulation. In overtime, which counts as a league tiebreaker, FHS did what head coach Brian Ferreira has been pushing them to do over the last few games and it paid off. A nice display of sharing the puck led to a quality scoring opportunity and the Clippers cashed in as Sam McKenzie netted her second of the game to give Falmouth the 2-1 OT victory.

Falmouth is now 6-1-3 overall, with two straight ties and three in their last four games. The team is 2-0-3 in Cape and Islands play.

“We didn’t solve the world’s problems tonight, but we took a step forward, I think. There was still a lot of non-passes made... we still have a lot of work to do, but it’s a step in the right direction.”

McKenzie’s overtime winner saw the sophomore circle behind the net and up the left wing boards. As she began to work her way to the high slot the center left a drop pass for defenseman Chloe Champani, who floated a high wrist shot on net. D-Y keeper Tess Lavelle made the save, but the rebound leaked out to her left where McKenzie crashed the net and popped it in to end the game at the 2:32 mark of OT.

“That was a nice play. They were dead, all eight players on the ice. That was a two-plus minute shift, four on four, to start overtime,” Ferreira said. “Most times she’ll try to turn the corner and she’ll shoot that, but if she shot that it probably would have been right into somebody and it’s a jailbreak the other way. She made a nice play dropping it to Chloe and the best part was that her shot got through. We’ve had a huge problem with defensemen getting shots through to the net. That one got through and look what happens, the rebound pops right onto a stick.”

Falmouth carried most of the first period, and outshot the Dolphins 7-3, but the teams headed to the locker room scoreless. The 0-0 deadlock held through most of the second, but D-Y broke through with just 41 seconds to go in the middle frame as Georgie Snow snapped in a rebound for a power play goal to give her team the lead. Keeper Lucy Armour (16 saves) made a kick save on the initial shot from high in the zone, but Snow was camped on the far post and sneaked it inside the pipe to make it 1-0.

Falmouth got that one back early in the third with a bit of a lucky break. With the Clippers pinching against the right wing wall to keep D-Y from clearing the puck out of the zone, McKenzie flung a low shot at the net that had eyes. With help from a screen in front by Ryann McDonald, the shot found the back to tie the score.

Lavell certainly would have liked that one back, but she was a huge reason her team had a chance to win. The keeper made some superior saves along the way, including a glove save on a wrister by McKenzie 6:32 into the third that would have put FHS on top.

Armour did her part as well. The freshman made two huge saves late in the game. The first denied Snow on a bid from the right wing dot. Then in the final seconds she padded away a redirection from the doorstep by Chase Holmes, who was set up below the hashes.