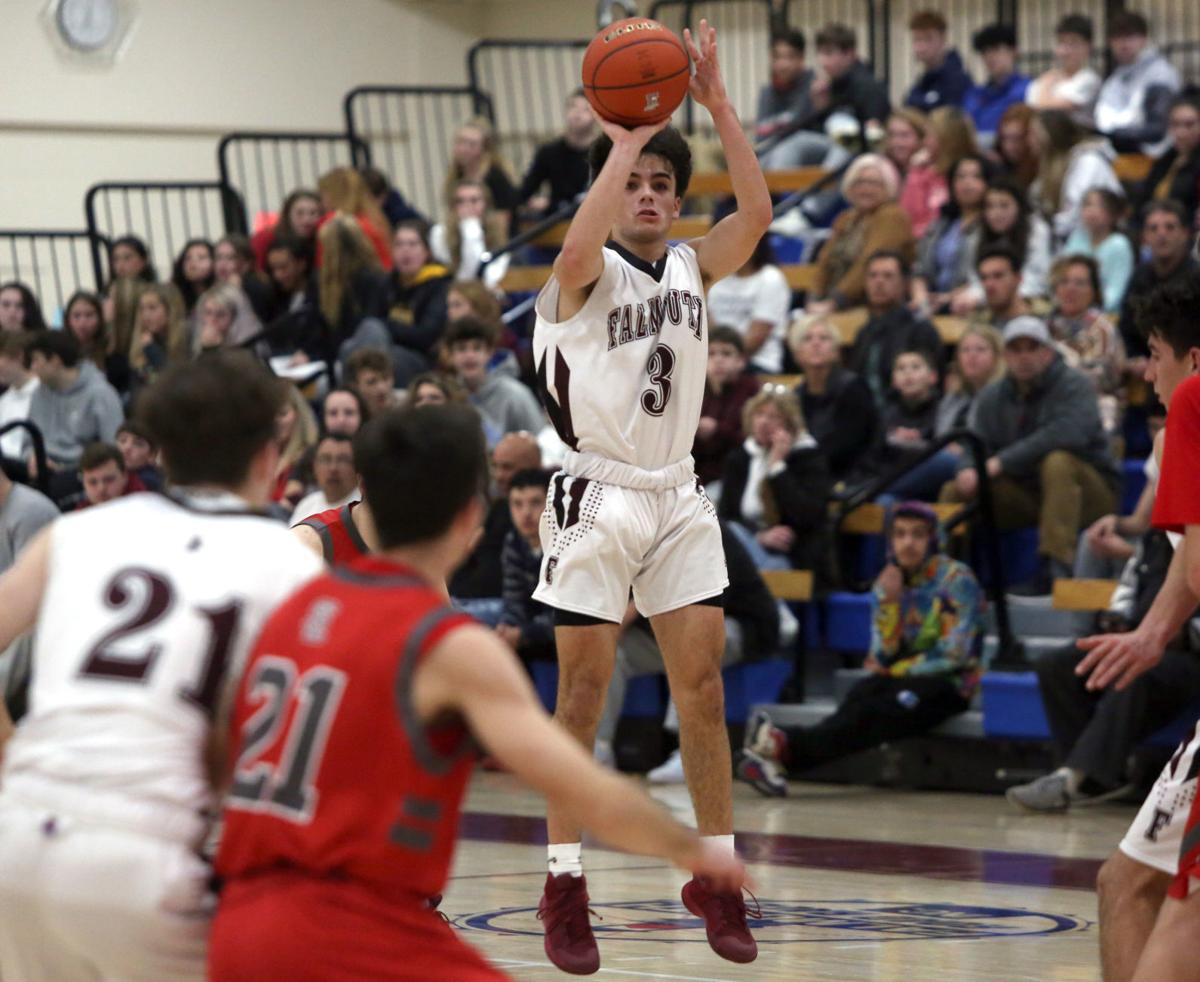 Falmouth guard Timmy Lang takes a jump shot in a win over Silver Lake last Friday. Lang was injured during pregame before the game against Nauset on Tuesday. 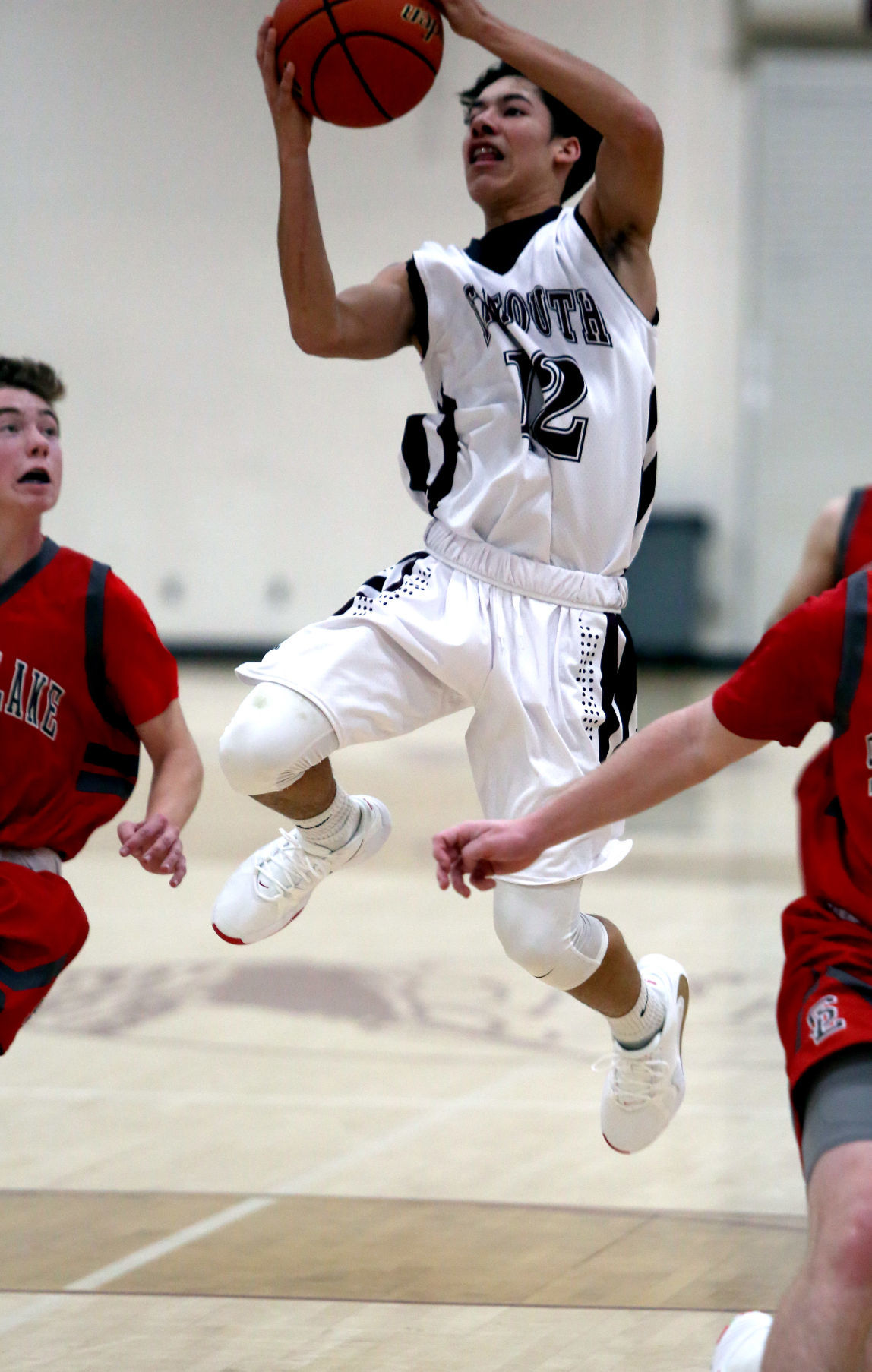 Falmouth guard Taylor Frye helped spark another second half rally by the Clippers as they won their fifth game in six tries.

A pregame misstep cost the Falmouth High School boys’ basketball team its starting point guard and things did not get much better after that for the Clippers against Nauset High on Tuesday, January 7.

Junior point guard Timmy Lang suffered a foot injury during the pregame shootaround and was unable to play for the Clippers as they opened Cape and Islands League play on the road against a big and strong Nauset High team. Without Lang to handle the ball, the Clippers were pressed by the Warriors throughout the game, and NHS was able to score a 62-50 win in Falmouth.

“We scrapped all game long, dove on the floor, played really hard, but they shot the lights out and we struggled to score,” head coach Paul Lundberg said.

Without Lang’s floor leadership and shooting, Falmouth relied on Julian Hendricks, Taylor Frye and Lucas Reis to play point guard. All three put in solid efforts, but the team’s already thin rotation was put out of sorts.

FHS hung tough in the first half. The Clippers were tied with Nauset early in the second quarter, at 17-17, but a 17-2 run by the visitors opened things up as Nauset bombed away from the perimeter. Bobby Joy led the charge with 24 points for the Warriors, who knocked down 14 three-pointers in the game. Henry Blanchard had 14 points for NHS.

Throughout the team’s 5-2 start, comebacks have been the Clippers’ calling card. The team rallied back to close the gap to eight, but Nauset held off FHS to score the victory.

Gerald Mahoney and Hendricks led the scoring in the game for FHS with 13 points apiece, with Hendricks going 8-for-12 from the free throw line. Frye had 10 points and Charlie Dowick scored eight. Trevor Hodgson and Gio Borgese played well off of the bench for Falmouth.

Falmouth is back in action Friday, January 10, at home. The Clippers will host Nantucket High School for a 5 PM game at the Antonucci Field House.

Perhaps a name change is in order for the Falmouth High School boys’ basketball team. While the Clippers’ monicker will stand forever, the 2019-20 edition may as well be known as the Zombies because they’re just about impossible to put down.

In every game that the Clippers have played in this season they have trailed their opposition by 10 or more points. In five of those six games they have come back to win, reaching out from the grave to pull out a victory.

It happened once again on Friday, January 3, as the team showed that it had not given up rallying for New Year’s. Trailing by 11 points in the third quarter to Silver Lake, Falmouth rode a hot fourth quarter from junior forward Gerald Mahoney and some pinpoint free-throw shooting from junior Charlie Dowick to secure a 50-46 win over Silver Lake.

“They scrap and scrap and scrap,” coach Paul Lundberg said. “Get the big shot, make it and get another one. (Silver Lake) can play, they’re good...we finally moved the ball and then hit the shots.”

The Lakers jumped out to an early five point lead and played from the front until the fourth quarter, While SHS was able to lead, they were never able to put the Clippers away, even though it seemed like they’d do just that. Falmouth rallied in the second quarter from eight down to get within three, and the Lakers pushed it right back to eight. It happened again in the third as SLHS led by eight, Falmouth cut it to one, and then the Lakers ran away again, pushing the lead to 11 points midway through the third.

That’s when everything clicked for Falmouth.

Three-pointers from Taylor Frye and Gerald Mahoney highlighted a surge by FHS that saw the Clippers close the gap to within two points. By the end of the third period FHS trailed by just one point, 35-34.

SLHS continued to hold on and hold on, but were finally overwhelmed by Falmouth’s comeback with 3:30 to play in the game. Frye gave his team its first lead of the night by swishing a 14-footer from the baseline for a 38-37 lead. Silver Lake responded, but then Dowick got the free throw line and nailed both to make it 40-39. Dowick’s efficiency at the line was big for Falmouth. Despite not shooting well from the floor, the Falmouth big man went 6-for-6 from the charity stripe in the fourth and finished the game with 11 points.

Silver Lake took its final lead with 2:11 to go. Ben Lofstram gave a Michael Jordan-esque shrug after caroming a three-pointer in off the glass to put the Lakers up by a pair, 42-40.

SLHS could not stem the torrent of offense from Falmouth, though. Mahoney, who led all scorers with 20 points in the game, got the lead back two possessions later with a deep three-pointer from the top of the arc. That trifecta made it 45-44 Clippers with 77 seconds to go in the contest.

Falmouth’s defense then came up with a much-needed stop, and then junior Timmy Lang came up huge. The guard buried another big three for FHS, giving the team its biggest lead of the game at 46-42 with 41 ticks left.

From there Dowick helped FHS close things out at the foul line. The Lakers got to within two points with seven second left when Jake LaFerrara scooped in a circus shot from under the rim, but then Dowick responded with his final two freebies to ice the win.

Having not played much during the holidays, with a week between contests, Lundberg said that the win was a testament to his team’s work ethic.

“They worked hard this vacation. I told the guys, the people in the stands, they’re not here while you’re working, and they worked hard,” Lundberg said.

Nicely written story. I was At the game and it was a fun game to watch