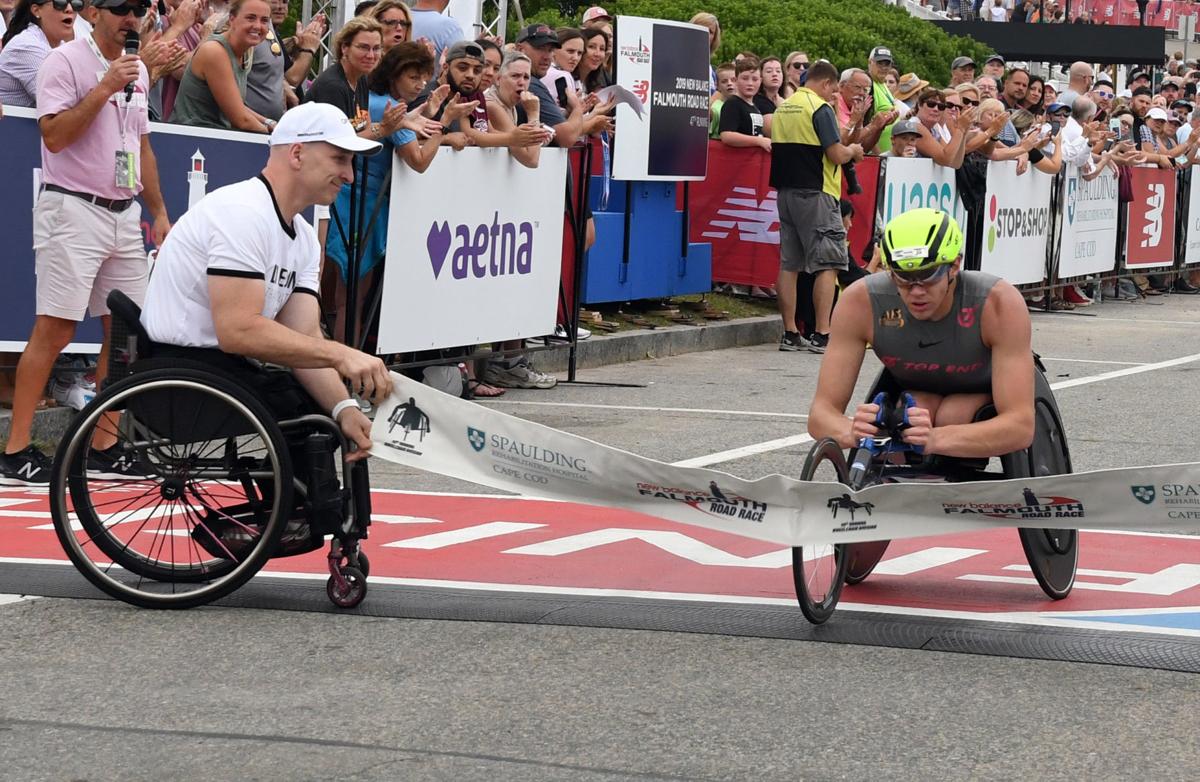 Daniel Romanchuk breaks the tape to win the wheelchair division as former champion Craig Blanchette holds the tape at the finish line. 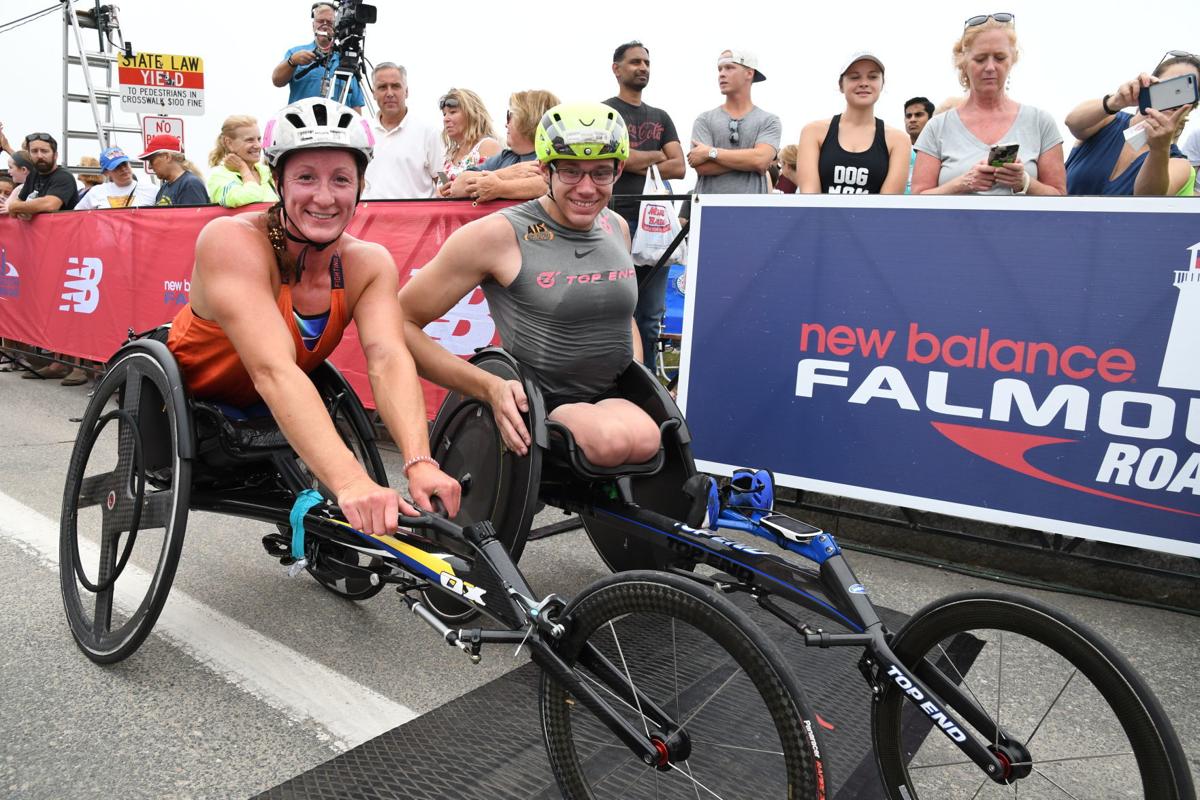 Daniel Romanchuk breaks the tape to win the wheelchair division as former champion Craig Blanchette holds the tape at the finish line.

Both Romanchuk, 21, and McFadden, 30, faced little competition in cruising to their third-straight victories at Falmouth on Sunday, August 18, and did so in record-breaking fashion. Romanchuk shattered his course record of 23:16, set in 2017, by finishing the seven-mile race in 21:58. McFadden, who entered Sunday with the women’s course record of 26:27 in 2015, also rewrote the record books with a 26:15 finish.

The two picked the perfect time to have their record-setting day, with Sunday being the 45th running of wheelchair division — a streak the Road Race committee believes to be the longest running non-marathon wheelchair division in the country, dating back to 1975.

“[It’s] definitely special,” McFadden said. “We have to thank those that came before us, like Bob Hall and Candace Cable. They set the precedence here and course record. So we have to look back on our heroes and continue to push forward.”

While McFadden reflecting on past winners, Romanchuk was busy focusing on the road ahead.

“I didn’t pay too much attention if anyone was with me or not,” he joked after the race, adding that the newly 21-year-old likely wouldn’t celebrate with a post-race beer.

This is Romanchuk’s third victory at Falmouth and his third-straight overall. For McFadden, the Clarksville, Maryland, native finally capped off the three-peat after winning back-to-back years in 2014 and 2015. In both of those years, McFadden set the course record. In addition to her five top finishes at Falmouth, McFadden also holds the four fastest wheelchair times by a woman.

As each runner set a new course record on the day, both Romanchuk and McFadden earned a $1,500 bonus on top of their $3,000 first-place prize in honor of the 45th running of the wheelchair division.

The dominance put forth, despite humidity reaching upwards of 95 percent later in the race, was reinforced by the rest of the field. In the men’s division, Alexandre Dupont, 33, took second and won $2,000. Hermin Garic, 29, took home $1,000 for his third-place finish with a time of 25:28. Other notable men’s finishers included Tony Nogueira, 51, a five-time winner at Falmouth who took fourth place, and Krige Schabort, 55, also a five-time winner who took sixth. A rising star in the men’s division, 16-year-old Jason Robinson finished fifth. In the women’s division, Katrina Gerhard, 22, an Ashburnham native and a member of the 2019 Team USA Para Athletics Marathon Championships was the runner-up. Cheri Blauwet, 39, a Wellesley native, took third place and left with $1,000 prize. Blauwet is a doctor at Spaulding Rehabilitation, a seven-time medalist at the Paralympics and two-time winner at the Boston Marathon. Ten-year-old Maddie Wilson placed fifth in the fourth year she has competed in the race with a time of 52:25.

Wilson said she wasn’t bothered by the humid elements, as she said she shaved off eight minutes from her personal record at Falmouth.

“Oh yeah, it’s gotten easier, but it was humid,” Wilson said. “And my arms are getting stronger, so that makes it a little easier.”

Upon crossing the finish line, the public address announcer shouted her name over the roar of the crowd—easily her favorite moment of the afternoon, besides being done with the race overall, she added with a grin. It’s moments like those that are pivotal to the growth in the sport.

She went on to add that without Hall paying off his vow to finish the Boston Marathon is under three hours and coming to Falmouth in 1975, the road wouldn’t be clear for her to dominate.

“This race has done so much for all of us,” McFadden said. “To have all these great racers come before us and [open the doors] for us means a lot. I mean it took until 20 years for me to break the course record.”

If Wilson has anything to do with it, she’ll be taking her mentor’s records sooner than later.

“I want to be her when I get older,” she said with a level of excitement in her voice, before adding, “Oh yeah, I’ll break all her records. All of them.”

If it means the game continues to move at the pace McFadden or Romanchuk can finish a course, she’ll be OK with Wilson breaking her records.