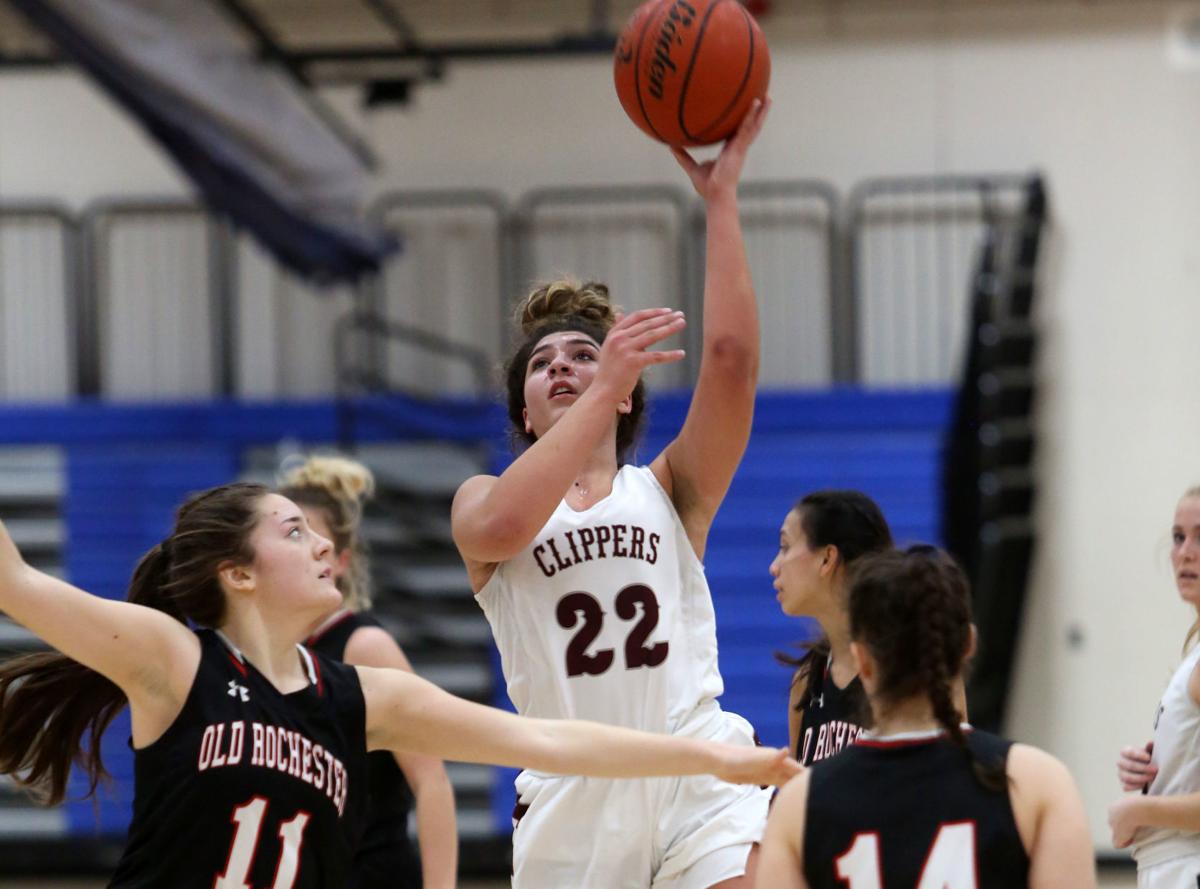 Falmouth High’s Lily Craft powers up a shot from the lane against Old Rochester during the team’s game on Monday night. 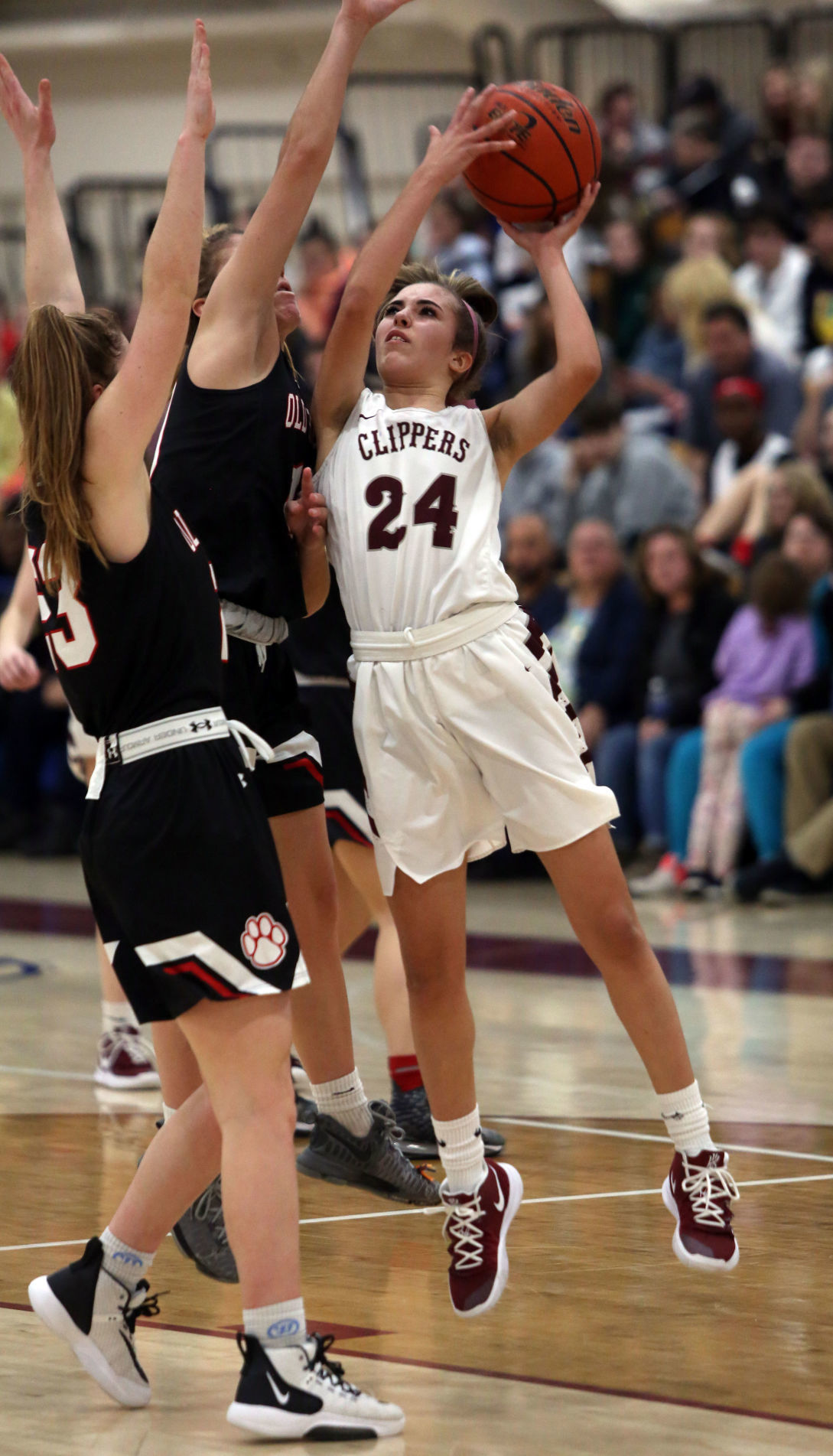 Junior Ariana Silvia scored 19 of her game-high 22 points in the second half and overtime to lead a comeback win by the Clippers. 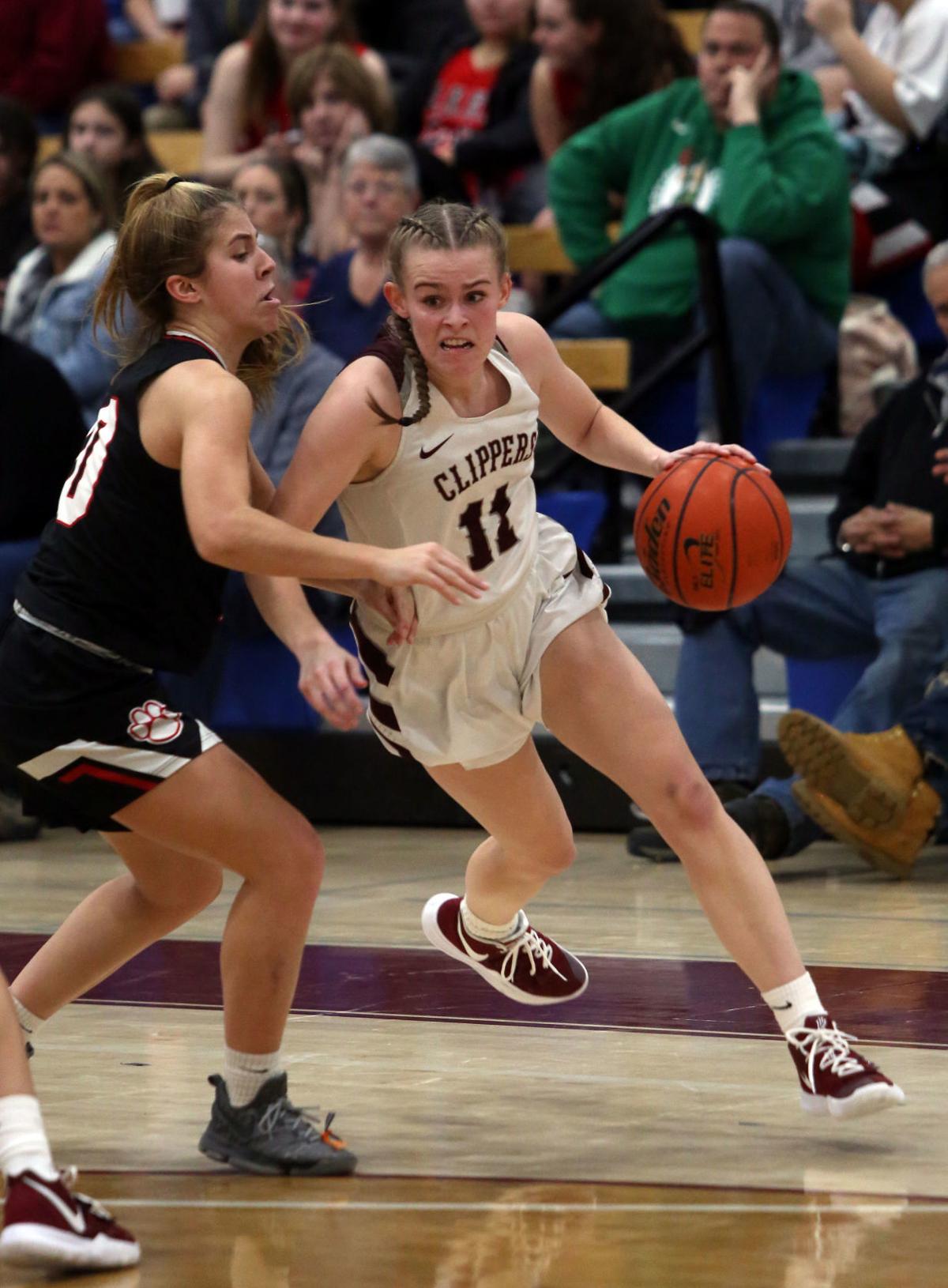 Senior captain Kayla Thomas had 21 points to help lead the Falmouth girls over Old Rochester for the second time this season.

Less than 24 hours after scoring perhaps their biggest win of the year, a come-from-behind victory against a very good Old Rochester team, the Falmouth High girls had their lowest point of the season. On a night where the shots would not fall, the Clippers dropped a 32-31 decision to rival Barnstable at home, suffering their first-ever loss in Cape and Islands League play.

Falmouth had two chances to score the winning points on its last possession, but could not get either shot to fall. Ariana Silvia had a good look from deep, out on the baseline, but the shot did not fall. Lily Craft grabbed the rebound of the missed shot and went back up with it. She drew contact, but the referees did not call a foul and the ball rimmed off.

Silvia led FHS with 13 points in the game. Kayla Thomas had eight and Craft finished with seven.

Having beaten Old Rochester handily the first time around, on the road, the Falmouth Clippers may have taken their opponents a little for granted on Monday, January 13, and it nearly cost them. FHS found itself trailing by as many as 10 points in the second half before turning it on in the fourth quarter to pull out an exciting victory in overtime, 53-47.

The win improved Falmouth’s record to 8-1 overall, and was the squad’s eighth-straight win. ORR is now 5-2, with their lone losses at the hands of FHS.

With ORR playing a physical brand of ball early on, Falmouth found itself struggling to find a rhythm offensively. The Bulldogs’ defense took away two of the Clippers’ top options, with Ari Silvia held to just a single three-pointer and Lily Craft kept off the board. With Emily Nelson suffering an injury early in the second quarter, FHS was flummoxed and could not find a rhythm. The shooting of all-star Kayla Thomas helped keep the team in the game, as she hit for 10 in the first half, but the team was lucky to be down just seven at the half, 24-17.

Despite everything that was working against them, coach Bob Buscher said that his team believed that a comeback was in the cards.

“We knew that we could do it, but we came in soft. We came in thinking we could just play. We beat them last time by 16; we’ve been winning a lot. (Old Rochester’s players) are tough, they’re athletic...all of our passes were getting tipped, we were playing at three-quarters’ speed and you can’t play like that. Then, we started to play full speed.”

Silvia, who was given fits by Meg Hughes in the first half, got on track to start the second half and her emergence in the game was a huge reason for the ultimate victory. The guard scored the first seven points of the second half herself, tying the score up. Buscher said that the team began running picks for Silvia to open space, and she responded with a couple of lay-ups and a three-pointer that tied it at 24.

As soon as things went right, they went wrong again, though. With Logan Fernandes and Maggie Brogioli leading the way, ORR took control again and led by 10 late in the third quarter before Kayla Thomas ended the quarter with a buzzer-beating three to pull FHS within seven, 38-31.

The big shot by Thomas (21 points) was a shot in the arm that the Clippers needed.

“Kayla said, ‘Let’s go.’ She hit some threes and then everybody picked it up. Ariana started getting after it, doing her thing, getting to the basket,” Buscher said.

Falmouth dominated the fourth quarter. Thomas hit back-to-back threes to close the gap to two points and then tied it up with just over three minutes to go with a baseline jumper that made it, 41-41. Silvia then gave the Clippers’ their first lead of the night with 2:30 to play with a drive down the lane, but ORR tied it up and took the lead with 12 seconds left when Mary Butler executed a perfect lob entry pass to the post for Cadence Johnson to lay off the glass for a two-point lead.

With time winding down, Falmouth’s plan was for Kayla Thomas to tie the score with a jump shot, but Silvia was fouled away from the ball with four seconds to go and stepped to the line, needing to hit both free throws to tie the score. With FHS struggling from the line mightily all night, that was anything but a given, but the junior swished both shots, setting up the OT.

In overtime Falmouth took control right away and never backed down. An Anya Thomas free throw put the team ahead to stay and then a beautiful up-and-under layup by Silvia—who led all scorers with 22—had the Clippers up by three. Silvia then came up with a steal at mid-court and drove in for two more and a five-point lead with 2:18 left. After another stop the junior did it again, getting to the rack to push the lead to seven, sewing it up for the maroon and white.