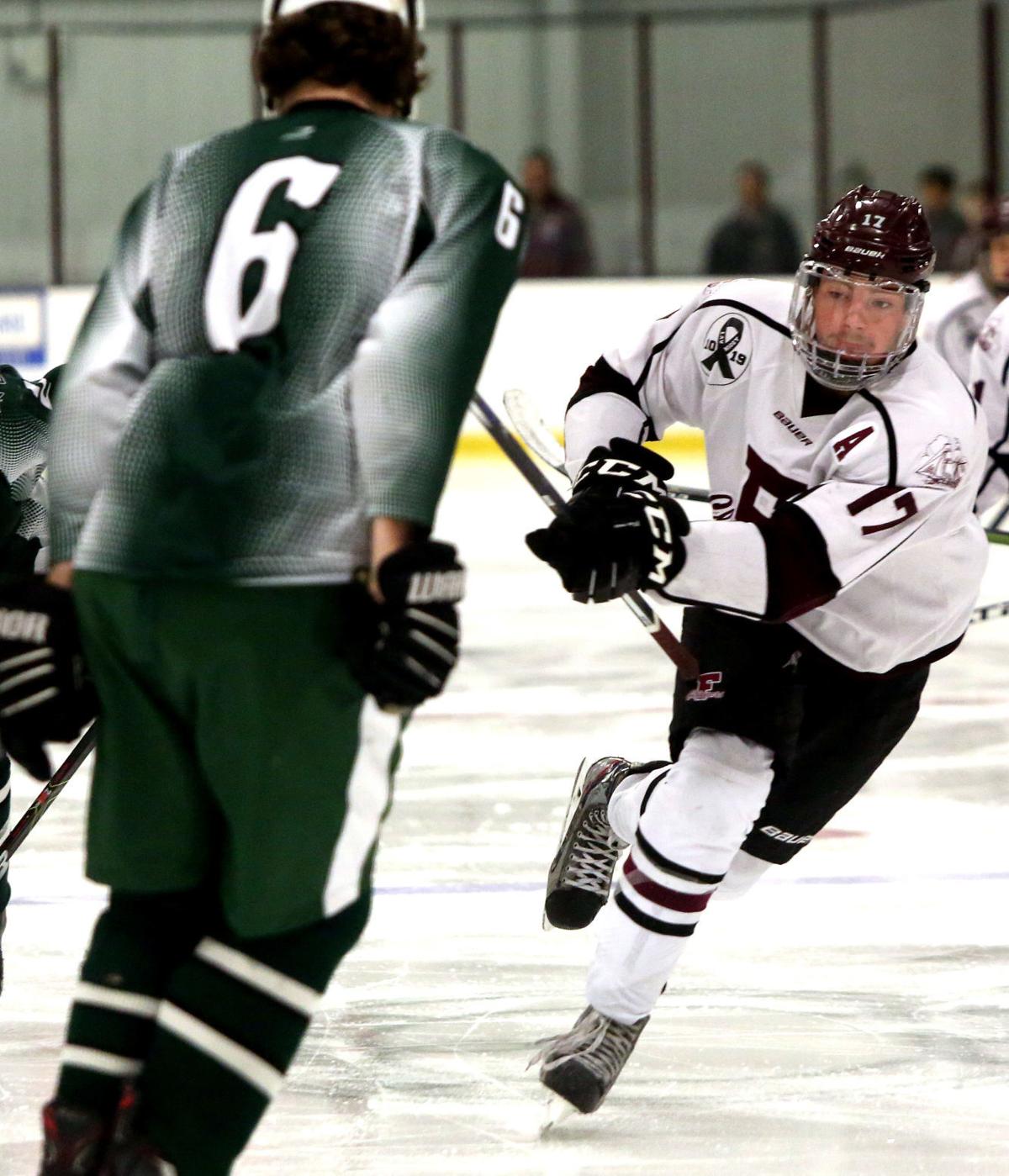 Senior Jake McKenzie follows through on a shot during the second period against D-Y. McKenzie scored a goal in each period to lead the Clippers to a 7-1 victory. 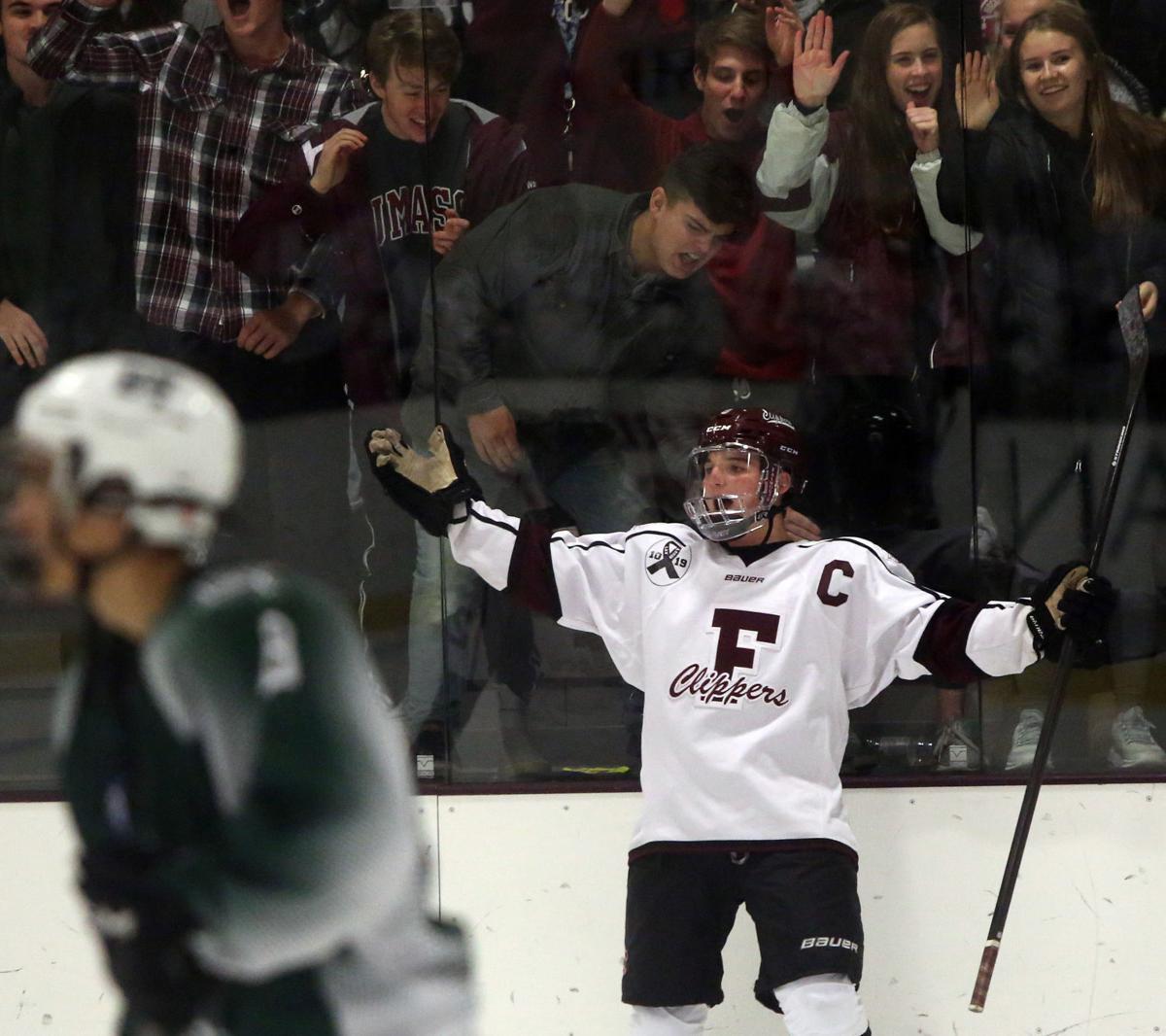 Co-captain Jack Hamilton celebrates after his deflected shot went in for Falmouth’s second of three shorthanded goals in a 7-1 win against Dennis-Yarmouth on Saturday night.

Bridgewater-Raynham came out of the gate determined to show visiting Falmouth that they were not a team to be trifled with. The Trojans played a great first period on their home ice against the Clippers, and flew around making plays.

At the end of 15 minutes they had nothing to show for it, though, because senior goalie North Wilson responded with his best period in a varsity uniform for Falmouth High. Wilson was locked in and turned aside everything thrown his way in the opening stanza, and that might have been the difference as the Clippers went on to take a 3-1 decision in their first road contest of the year.

Senior Eric Wainwright scored twice and Stone Devlin had the other as the Clippers improved to 2-0 to open the year. It was Wilson, though, who was the player of the game for FHS as he stopped 18 of 19 shots on goals to notch his second win of the year and keep his goals against average at an even 1.00.

“In the first period he was great,” head coach Paul Moore said. “He made four goal-saving saves in the first. He did it the whole game. He was unconscious.”

Wilson’s great first period allowed the Clippers to get their legs under them and from that point on the team dominated the game. FHS went on to outshoot the Trojans 37-19 overall as the defense stood up to allow just nine shots over the last two periods after Wilson had to stop 10 in the first. Coach Moore said that co-captain Jack Hamilton and Johnny Yarbrough had big games on the back end.

For the second-straight game the Clippers’ special teams were difference-makers. The Clippers’ power play was 2-for-3 on the night while the penalty killing unit handled both shorthanded scenarios it faced.

The lone even-strength goal for Falmouth came early in the second period when Wainwright made it 1-0 at 2:52 on a nice rip that was set up by Nick Champani. B-R tied it early in the third, just 62 seconds into the frame, with a shot off of a faceoff. It was the lone mark against Wilson in the game.

The power play unit helped FHS pull ahead for good, and ice the win, with two goals in less than two minutes midway through the third. At 7:53, Stone Devlin got his first of the year on the power play on a shot that was set up nicely by Wainwright. The forward flew down the wall and drew the defense before centering for Devlin for the shot that proved to be the game-winner.

At 9:48 Wainwright scored another PPG for FHS on a pretty play out of the corner. Nick Champani and Devlin assisted on the play that saw the senior rip a shot that hit the bar before he charged in and put away his own rebound.

The two goals by the transfer from Xaverian were his second and third of the season. Moore said that the forward was great all game long.

“He was a beast. He had two goals, blocked like six shots. He was all-in,” the coach said.

FHS faces back-to-back games over the weekend, with contests on both Saturday and Sunday. The Clippers will host Coyle and Cassidy at 7 PM December 21, then welcome Weymouth to town the next day for a 4 PM tilt.

Opening Night showed some of the best and worst of what this year’s Falmouth High School boys’ ice hockey team can be.

The good was downright great. Falmouth’s penalty killing unit provided three shorthanded goals, and the power play added one as well, as the special teams were very much special in the Clippers’ 7-1 win against visiting Dennis-Yarmouth.

The bad came in the form of the reason that the penalty-killing unit had to be on the ice as much as it did. FHS was undisciplined at times and incurred too many needless penalties, seven in total. The types of penalties did not have coach Paul Moore in a good mood either, FHS was cited for a pair of elbowing penalties, two cross checks and an unsportsmanlike conduct.

“That kind of stuff isn’t going to fly,” coach Moore said. “There are going to be penalties in a hockey game, there just are, but those types are undisciplined and they’re going to hurt us down the road.”

Senior Jake McKenzie had a big game for Falmouth to help lead the way to victory, and was maybe the biggest positive. McKenzie nearly scored half as many goals as he had all of last year (7) by potting a hat trick for the Clippers. He also assisted on a goal.

McKenzie got the first of the season for FHS just 42 seconds into the game, with an assist from Daren McDonald, as he stabbed a rebound by his linemate over the sliding Mason Sheehan to make it 1-0. Newcomer Drew Scolaro potted a shorthanded goal at 12:59 of the first to make it 2-0 with a shot that was assisted on by McKenzie and Eric Wainwright.

FHS put the game away in the second period, collecting three goals in less than five minutes to increase the lead to 5-0. McKenzie bombed in a shorthanded goal with a steal and slap from the left circle at the 5:50 mark. A minute later another shorthanded shot from just higher in the zone by co-captain Jack Hamilton hit a D-Y skate and went in to make it 4-0. Co-captain Nick Champani finished off a power play chance to give the Clippers a five-goal cushion.

In the third period Falmouth got two more to finish their high-scoring night. McDonald, a sophomore, netted his second career goal, and first of the year, on a pretty breakaway. McKenzie then finished off his hat trick midway through the third.

Moore said that overall there was more good than bad in the game. He is focused on getting a better overall effort and cleaner game from his club.

“The compete level was great. Our (penalty kill), how can you not be happy about that? The other side of that coin, though, is the penalties we took... we rolled out all of our lines, I thought our third and fourth lines played a lot, they played well. The back end was consistent.”