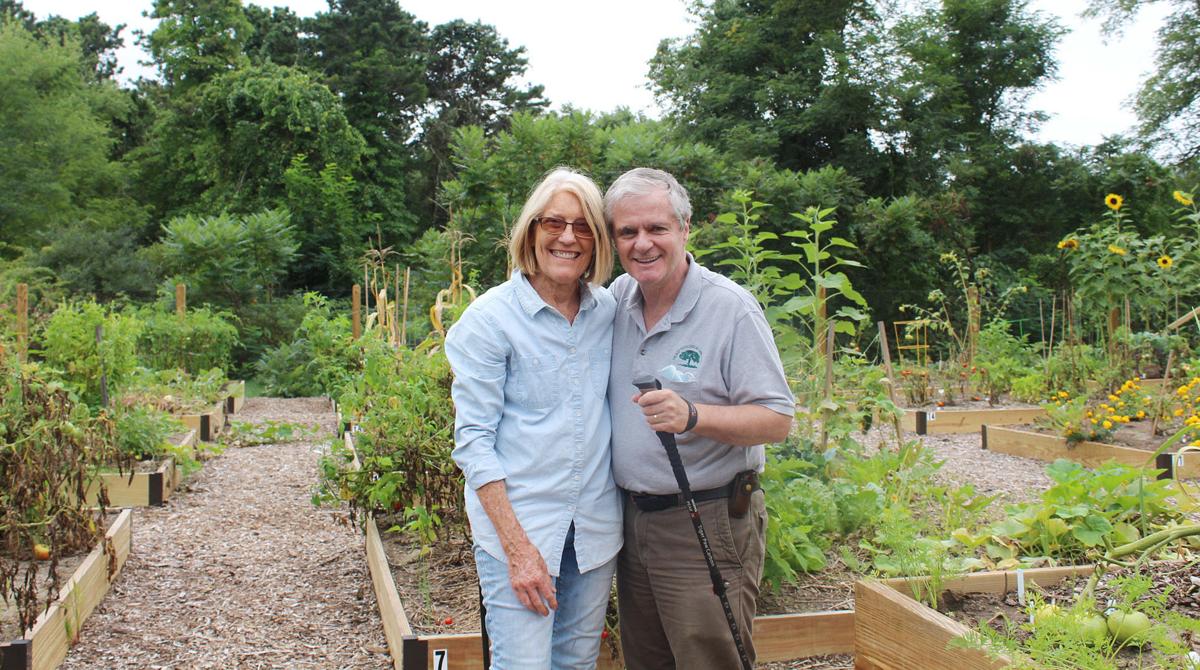 Virginia Scharfenberg and her partner Michael Talbot stand together in the Mashpee Community Garden. The garden was dedicated to Mr. Talbot by the Mashpee selectmen on August 31. 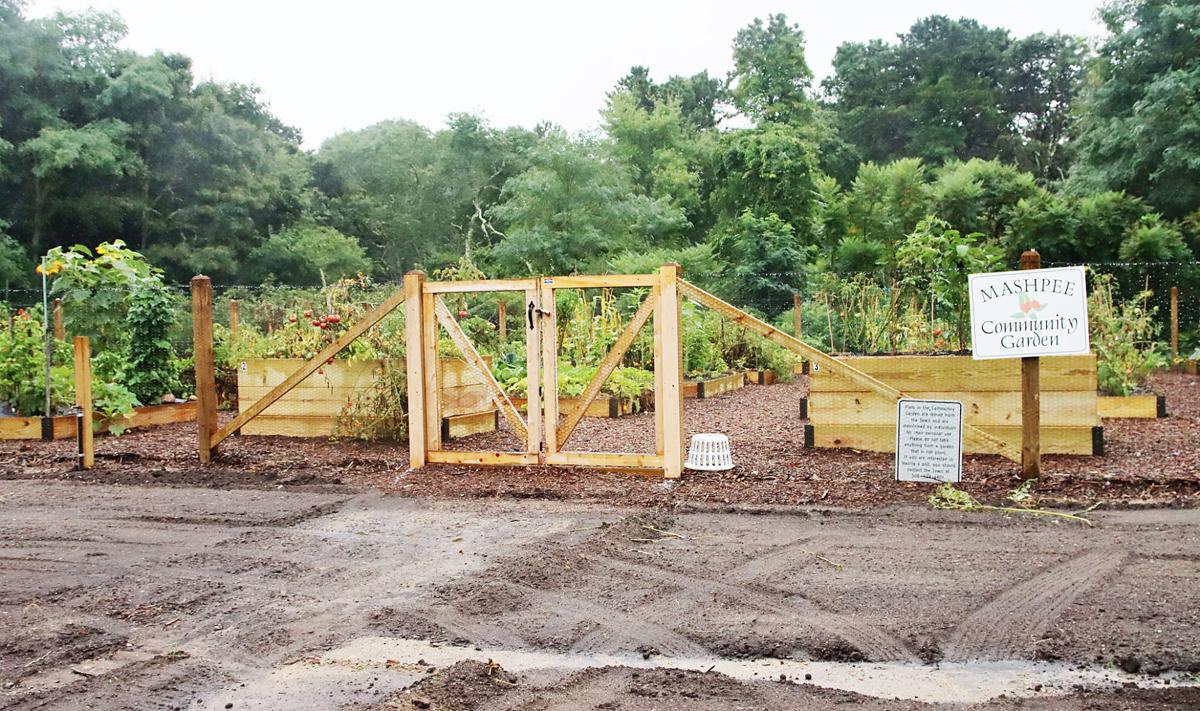 Previously abandoned, the Mashpee Community Garden has been revived this year.

Virginia Scharfenberg and her partner Michael Talbot stand together in the Mashpee Community Garden. The garden was dedicated to Mr. Talbot by the Mashpee selectmen on August 31.

Previously abandoned, the Mashpee Community Garden has been revived this year.

After more than 10 years of trial and tribulation, the Mashpee Community Garden on Route 130 has had a fruitful season, thanks to the ongoing support of Michael Talbot and his partner, Virginia Scharfenberg.

Yellow sunflowers nearly 10 feet tall stand proudly with their heads facing the sun in one of the 20 garden beds.

Among the raised beds is a variety of burgeoning vegetables and flowers such as corn stalks, squash, peppers, bright yellow and orange marigolds and throngs of tomato species.

With the help of the Mashpee Department of Public Works, the Community Preservation Committee, the Historical Commission and AmeriCorps volunteers, the Community Garden Advisory Committee was able to revamp the garden completely this past winter.

Mr. Talbot and Ms. Scharfenberg were responsible for developing the garden advisory committee in 2018.

Together they maintain one of the two Americans with Disabilities Act-compliant raised beds, which are much higher than the other beds to allow people with disabilities or those in wheelchairs access to the garden.

“I have a rare neurological degenerative disorder that affects my speech and my balance and coordination,” Mr. Talbot said.

He was diagnosed with multiple system atrophy, or MSA, about a year ago, but Ms. Scharfenberg said they have come to realize he has had symptoms for about the past four years.

The disorder has symptoms similar to those of Parkinson’s disease, and it has no cure.

On August 31, the Mashpee Board of Selectmen unanimously voted to dedicate the community garden to Mr. Talbot for his years of service on town boards and committees.

“I was totally surprised, but I think Andrew [Gottlieb, Mashpee selectman] appreciates what I’ve worked on over the years, so it was very nice, but it was totally unexpected,” Mr. Talbot said.

A placard will be added to the existing sign that will state: “Dedicated to Michael Talbot in appreciation of his contributions to the Town of Mashpee.”

Mr. Talbot was responsible for getting grant funding for the garden, which he also designed and restored, in 2018.

Before 2018 the community garden, which was initially launched in 2006, had been abandoned.

The town considered using the land for pickleball courts, but Mr. Talbot, who at the time was president of the Mashpee Environmental Coalition, along with Ms. Scharfenberg and other horticulture fans, banded together to create the garden advisory committee.

The committee’s plan was to maintain the plots and to ensure the garden never returned to its previous neglected state.

Mr. Talbot and Ms. Scharfenberg have been married since 1994. They moved to Mashpee from Dorchester in 1998.

Together they own Talbot Ecological Land Care and have years of experience as horticulturists.

Ms. Scharfenberg has taken over many of the positions Mr. Talbot has had to step down from since the progression of his disorder, including chairman of the garden advisory committee and president of the Mashpee Environmental Coalition.

Some of the vegetables they are growing together at the garden include Sungold cherry tomatoes, larger tomatoes, carrots, leeks and kale.

On this day, Mr. Talbot explains to Ms. Scharfenberg how the extreme temperature changes and overwatering are affecting their tomatoes and causing cracking.

The couple picks what is ripe and places it in a blue plastic bag they are reusing.

“We try to come here about twice a week,” Ms. Scharfenberg said.

After the restoration of the gardens, Ms. Scharfenberg said they gained a lot of interest, which she attributes to people desiring to get out of the house during COVID-19.

“We have about five people on the wait list now,” Ms. Scharfenberg said.

The couple hopes to begin an expansion of the garden in the near future, possibly adding eight beds.

“If we hope to get people on the wait list into a garden, we kind of have to expand,” Mr. Talbot said with a heartfelt smile.

In addition to expanding, the garden committee plans to create a compost pile and a public section for anyone to pick herbs and possibly tomatoes.