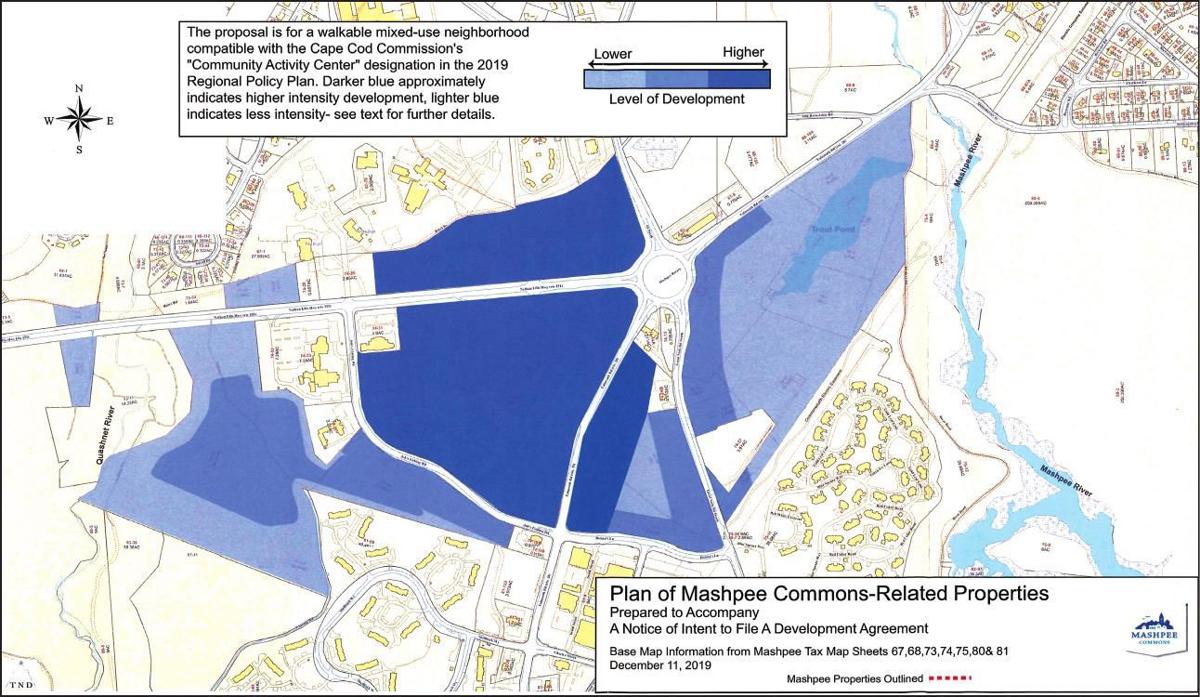 A notice of intent for a development agreement submitted by Mashpee Commons to the Cape Cod Commission in December shows the development’s proposed expansion stretching east of the Mashpee rotary, as far south as Donna’s Lane and beyond Jobs Fishing Road.

The notice asks the commission to confirm that the proposed project is eligible for a development agreement, which would bring the commission, the Mashpee Planning Board, and the Commons into joint negotiations, rather than engaging in a more traditional, segregated review.

The commercial center of town seeks to expand onto some 186 acres of property, building mixed-use structures with a range of densities. The expansion would likely require changes or exemptions from zoning bylaws.

A map filed with the notice shows Commons development stretching nearly to Quinaquisset Avenue and the Mashpee River east of the rotary, south to Donna’s Lane, and west to the Quashnet River.

“While existing entitlements allow additional growth, constraints in the zoning and the uncertainties surrounding discretionary permitting do not allow an optimal outcome for the Town, the region, or a predictable development process for the developer,” the notice from the Commons states.

The notice of intent states that the development is expected to be built in phases over a time period which would exceed seven years and that future phases of the project are not fully defined.

In July of last year, the board of selectmen agreed to support the Commons’ request for the development agreement process. The planning board in August also voted in favor of the process.

The chairwoman of the planning board, Mary Waygan, wrote in an email to the Commons that “the use of the Development Agreement process would be advantageous to all parties involved.”

The Commons provides more than 1,000 jobs and housing for about 100 people and is the largest taxpayer in Mashpee, the notice of intent states.

“The right type of development, in the right location, has the potential to make significant strides toward addressing the housing crisis, while helping to restore the water quality of the estuaries, spark economic development and year-round jobs,” the notice says.

The notice also says that the development could “create a controllable and appropriate level of growth to moderate property taxes by increasing the tax base.”

The planning board made note of the notice of intent at its January 15 meeting.

“Right now they’re going to undergo a commission review process and the commission will determine whether or not they are eligible for a development agreement,” town planner Evan Lehrer said.

“Once that determination has been made, I’m making an assumption that we will receive notification that they are eligible and then they’ll go onto the next step,” Mr. Lehrer said.

The town planner said it could be a number of months before the commission makes a decision regarding the development agreement.

The notice of intent from the Commons states that the large land area, multiple proposed uses and structures, and multiple parcels of land are among the factors that make the project eligible for a development agreement.

If changes to zoning bylaws are sought by the Commons, the project could eventually come before Town Meeting.

The Commons proposed changes to zoning bylaws in 2018, but those changes never made it to the Town Meeting floor.

The Commons owns about 250 acres of property in Mashpee, the notice of intent says.

The Commons is a big part of why Mashpee is a great place to live. They're good neighbors and great partners with the town - and a major reason why our taxes stay low. Looking forward to seeing the expansion plans as they're developed.