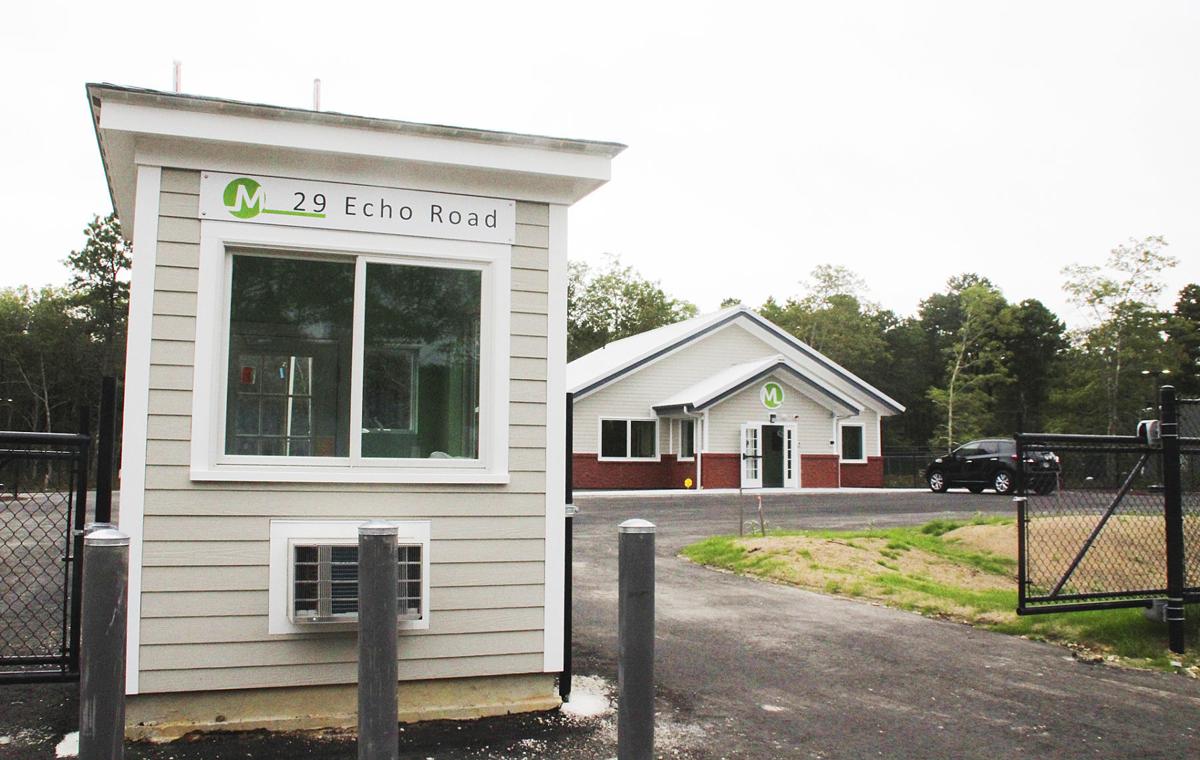 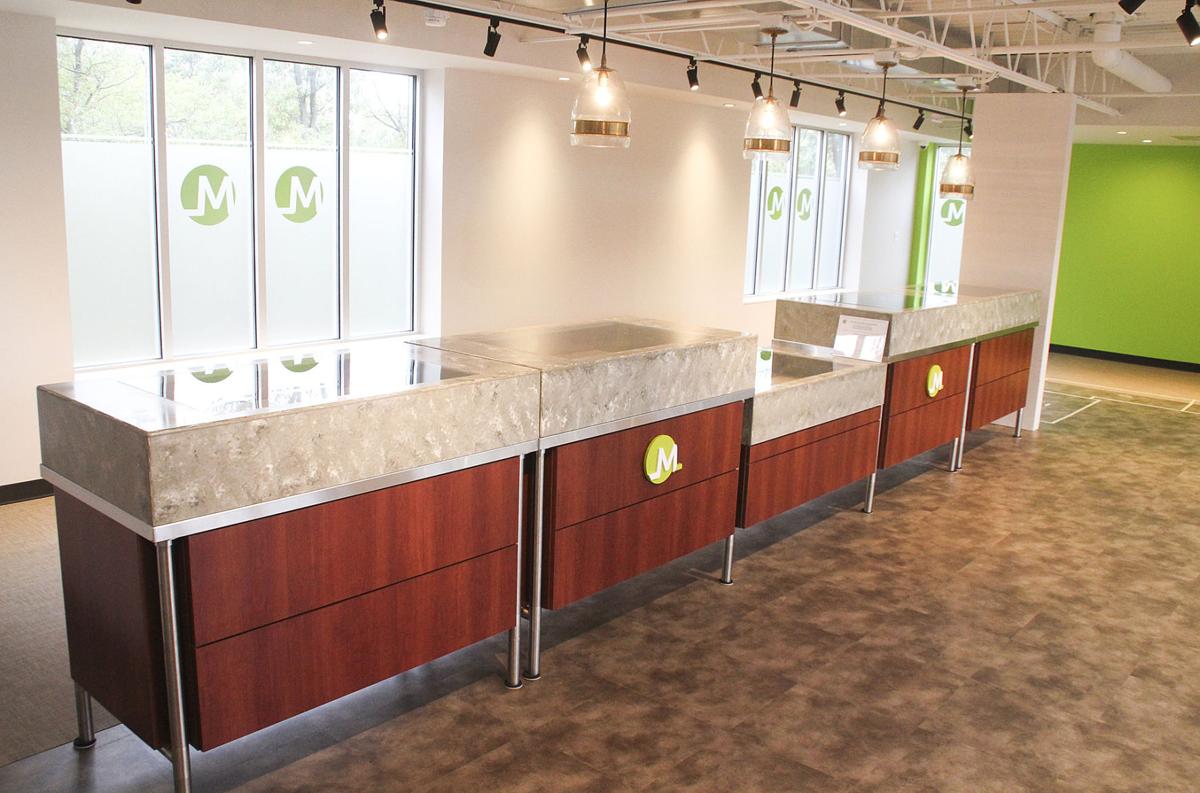 Medical Marijuana of Massachusetts counter inside of its Plymouth location. Patients can view the product in this section. 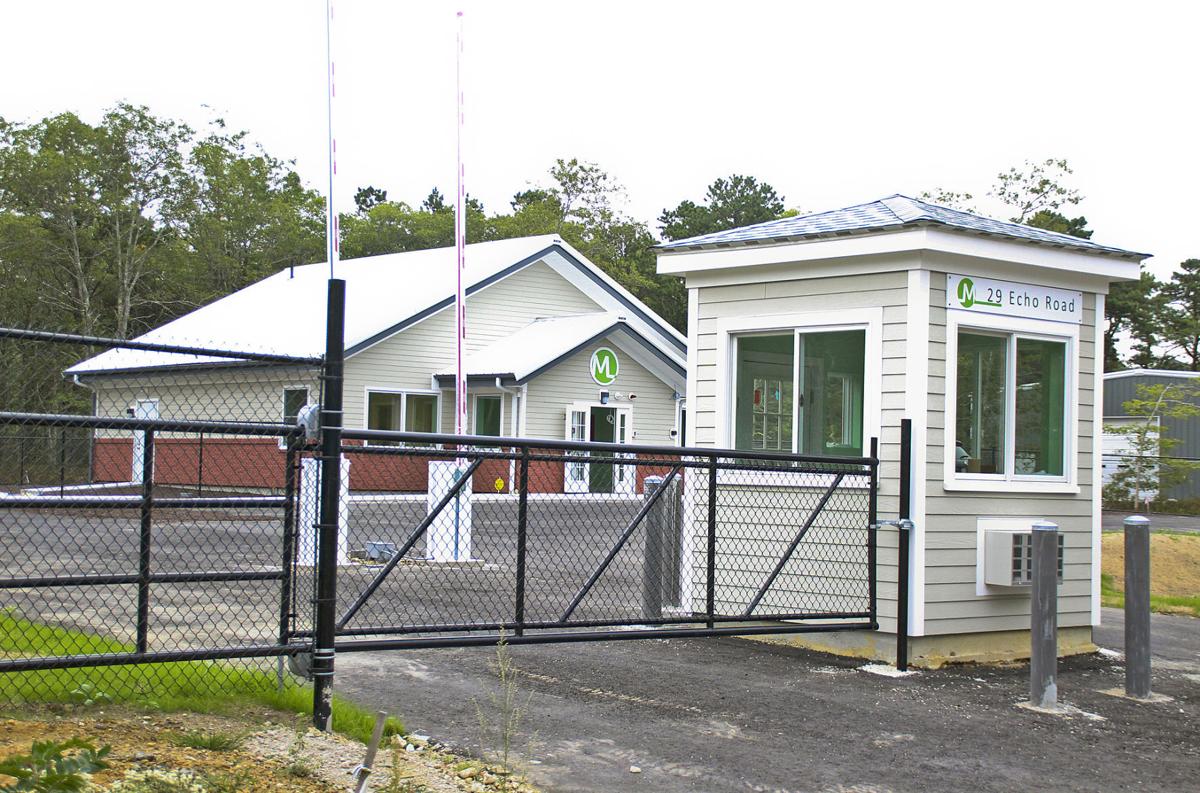 Medical Marijuana of Massachusetts counter inside of its Plymouth location. Patients can view the product in this section.

The William Noyes Webster Foundation plans to open a dispensary in Dennis in December, but director of Medical Marijuana of Massachusetts and supervisor for the Mashpee facility, James Vaccaro, said that the store could open by the end of November, depending on the production of the plant and its processing.

While the facility is planned for medical marijuana, Mr. Vaccaro said that they have considered selling recreational marijuana in Mashpee if voters approve retail sales, although the product would be sold at a different building per state law.

Mr. Vaccaro said construction of the parking lot at the Echo Road dispensary could be wrapped up by the end of this week, leaving only a few loose ends to tie up before receiving an occupancy permit.

That, and the product.

“We are dependent on the product,” Mr. Vaccaro said during a brief tour of the one-story facility in Mashpee.

The product—marijuana—is in the beginning stages of growth in an acre-sized facility in the Plymouth Industrial Park, off Exit 7 on the Pilgrim Highway.

The store currently plans to sell several blends of marijuana with different levels of tetrahydrocannabinol, commonly known as THC, and cannabidiol, commonly known as CBD. THC gives a patient more of a “high” and can help with pain and disease like multiple sclerosis and Chron’s disease, while CBD lends to healing properties for anxiety, seizures and as a cancer inhibitor. Strands the company plans to sell at the store have names such as White Rhino, Mammoth and Skywalker OG.

The product will come in different forms for consumption or application such as oils, creams, tinctures, gel capsules or the dry product. The company will not sell edibles like baked cookies or gummy bears that could seem enticing to children.

Mr. Vaccaro, at this point, is unsure how many patients they could have at the facility. “This is a new enterprise,” he said. “We are learning as we go.” Massachusetts Health and Human Services, as of August 31, lists more than 40,000 patients in the state with a medical marijuana card, meaning they can purchase the product from a store.

During a tour of the Mashpee facility on Monday, the building remains mostly vacant but has a mostly finished look. The walls have been painted lime green. A white “M” in a green circle marks the entrance of the building. The interior has the feel of a doctor’s office.

At Echo Road, a security shed and two security gates block the entrance and exit from the parking area. A black fence wraps around the grounds.

Come the end of November, a patient with a state-approved medical marijuana card, by appointment, will need approval from a security guard at the gates to gain entrance. Once in the parking facility, the patient will need to flash their license in front of a security camera to gain entrance into the store, where they will then sign in with a security guard. Patients can sit in a waiting room before entering a section of the building reserved for education. Company representatives will inform patients about the variety of brands they offer. Patients can then enter the actual sales area where they will be able to look at the product through a magnifying glass, smell and review the offerings.

Transactions with cash and debit card (no credit cards because the federal government still lists the sale of marijuana as a crime) will be done through an automated machine as a security precaution.

Mr. Vaccaro said that all unsold product at the facility will be shipped out at night and then shipped back in for the morning, also as a security precaution.

The product for the medical facility in Mashpee is currently growing at the facility in Plymouth.

Along with providing a place for cultivation, the Plymouth site also serves as the headquarters for Medical Marijuana of Massachusetts as well as another store for the sale of its product.

Currently a staff of six tends to the production of the plant.

All staff and visitors, including this reporter, must don scrubs to enter the production area. The production section of the building smells like a mix of soil, wild flowers, and skunk. Rooms reserved for varying stages of the production snake through the laboratory-like facility. Organic soil is stored for weeks or even months at a time to break down for the first stages, before it is used in production. All soil and other products are completely organic, the staff said.

Smaller plants line the walls of the seeding and propagation room. Staff members start plants from seed as well as with what are called clones or stems cut from mother plants. The propagation room is humid, and C02 is piped in to allow the plants to grow quickly. Rows of varying sizes of plants—from inches in height to about a foot—sit under 90-watt LED lights. Plants from the clippings can grow about a foot in two weeks.

“We give them as much love as we can,” said Keith Tibbetts, co-director of cultivation and processing, who wore a blue smock and a pair of spectacles.

From the propagation room, the plants are taken into the flowering room. The lights in the room, Mr. Tibbetts explains, stay on longer in a day to encourage budding.

From flowering, the plants are trimmed, dried, and then cured.

The entire process, Mr. Tibbetts said, takes about 14 weeks from clones and 16 weeks from seed.

While much of the buds are sold dry, others are processed and turned into oils, tinctures, or creams. The company uses two procedures to synthesize the product: mashing it so that only the medicinal quality remains, and a process of washing away the non-medical properties of the plant.

Mr. Tibbetts said that most important to the process is that all doses are measured and recorded.

“We see this as medicine,” he said. “You will know exactly how much THC and CBD you will get.”

Jonathan H. Herlihy, the chief of operations for the medical product company, said that each product can help a different symptom varying from pains from exercising to helping pain management for a cancer patient. The company, with registered nurses and pharmacists, will work with patients to find the right balance for their ills, Mr. Herlihy said. A doctor can make a recommendation for a patient to use medical marijuana, and then the state produces a medical marijuana card for the patient. But the patient, with access to the store with the card, works with the store staff to find what works for them.

Mr. Herlihy got in the industry because of his confidence in the product. He started his career in dialysis and would eventually move over to outpatient eye surgery. He said that throughout his career he learned a lot about licensing for the medical profession. He knew that he could put together a medical marijuana practice well. As a testament, he said that in its application to the state, the company scored the highest out of all the other applicants in the state rating system.

And while he was confident in his business sense, he said he never went into the industry for the money. “Everything I read about it, medical marijuana has legs,” he said. As “we get older,” more and more friends find themselves ill with diseases like cancer, Parkinson’s or multiple sclerosis. Marijuana, he said, can help.

“We are not in it for the money; we are in it to win a Nobel Peace Prize,” Mr. Herlihy said. “We are going to solve a lot of problems.” He provided anecdotes of older people with aches or others taking several medications for high blood pressure or high cholesterol. He also pointed to Colorado, which he said has seen a nearly 25 percent reduction in opioid addiction.

Security in both facilities, as head of security for the company, Joseph Flaherty, said, “is the gold standard.” Mr. Flaherty retired after 31 years with the Massachusetts State Police.

The same black fencing that wraps around the Mashpee store also goes around the entire Plymouth facility. The Plymouth grounds have the same security check and protocol as well. The facility, Mr. Flaherty said, has 60 cameras in total.

The security system in both Mashpee and Plymouth can store video footage for up to 100 days.

He said he came to Medical Marijuana of Massachusetts because he liked that the company “was doing it for the right reasons,” not offering edible products like brownies or gummy bears, and wanted a good security system. They came at it, he said, as a collection of doctors looking at marijuana’s medical contributions.

'We are not in it for the money, we are in it to win a Nobel Peace Prize. We are going to solve a lot of problems.'