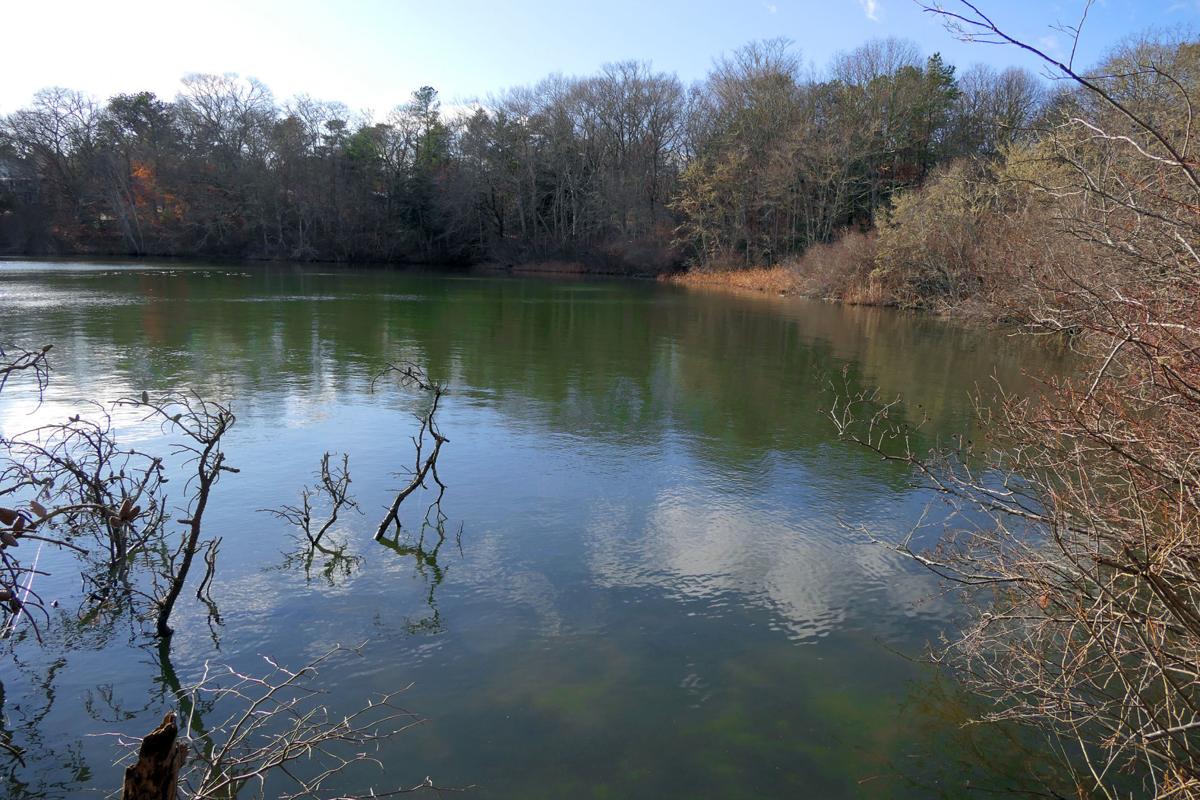 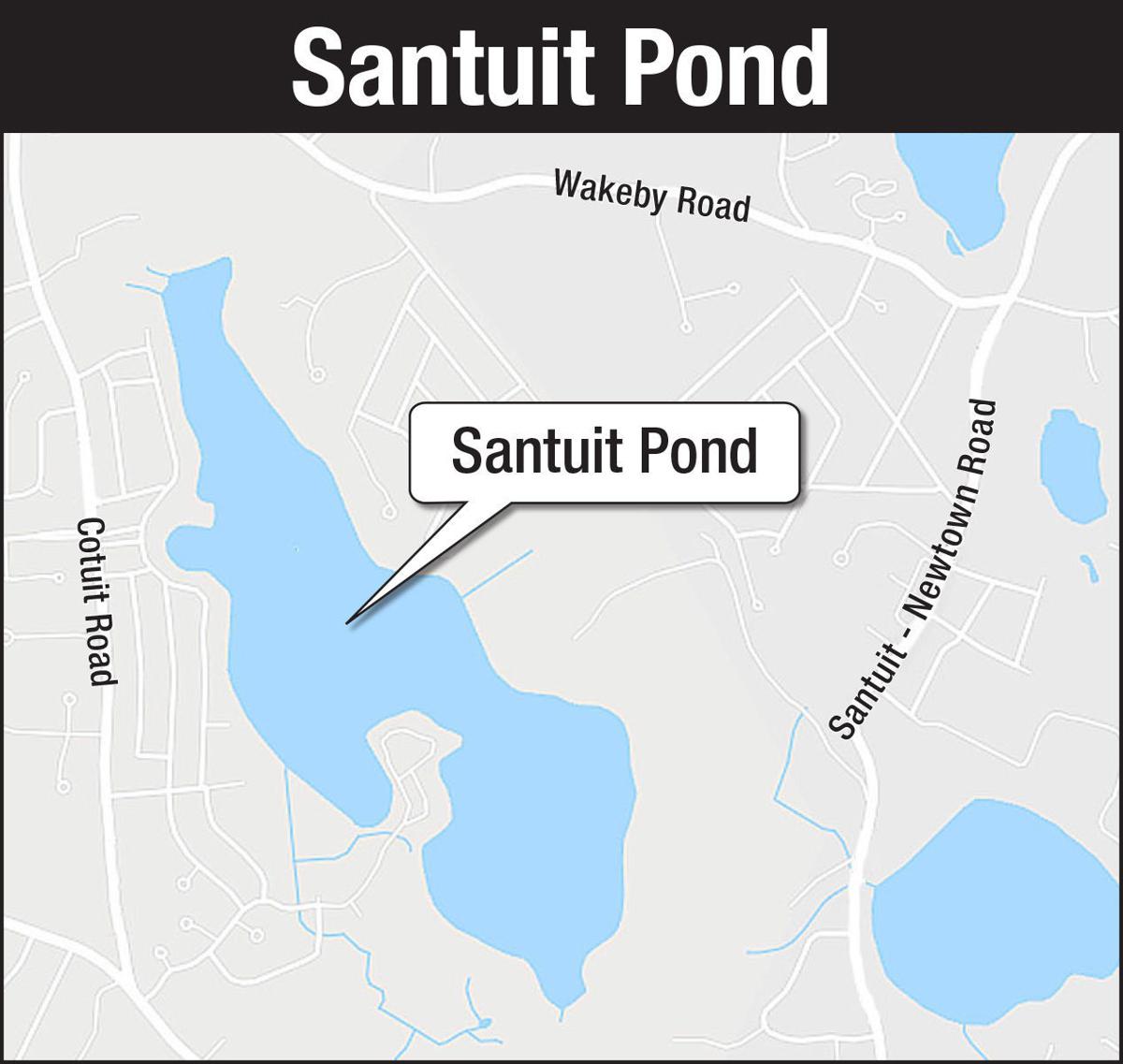 In the crowded Waquoit meeting room at Mashpee Town Hall, the hand of nearly every individual was raised in response to the question, “How many people are here because they are concerned about Santuit [Pond]?”

Posed Monday by Andrew R. Gottlieb, the chairman of the Mashpee selectmen, the dozens of hands raised in response reveal a growing discomfort among residents as the long-impaired pond continues to be inundated by toxic cyanobacteria, the effect of years of nutrient pollution.

“It’s a crappy night in December and this is probably the biggest turnout we’ve had for any particular issue for years,” Mr. Gottlieb said as cold rain poured down outside town hall.

The past summer marked the third consecutive summer that health advisories have been posted at the pond due to thick blooms of cyanobacteria that can produce toxins harmful to humans and pets. The latest advisory remains in place.

“I think we owe it to everybody to say we’re going to move it,” Mr. Gottlieb said, asking town staff to create an action plan by January so that mitigation efforts could be proposed in time to receive funding at May Town Meeting.

Directors from three town departments and the director of natural resources from the Mashpee Wampanoag Tribe presented an update to the selectmen on the situation facing the pond and the efforts to mitigate the cyanobacteria blooms.

For decades, an excess of phosphorus has flowed into Santuit Pond from various human sources. The substance acts as a fertilizer, which fuels the growth of harmful blue-green algae known as cyanobacteria.

Based on a study completed in 2010, Mashpee Director of Natural Resources Richard York told selectmen that the greatest source of phosphorus fueling cyanobacteria growth is the “cumulative impact of the inputs over the decades.”

“The bottom mud is the biggest source of phosphorus,” Mr. York said, pointing to the nearly decade-old study which estimated 78 percent of the phosphorus impacting the pond is built up in the sediment.

In addition to the phosphorus build-up already in the pond, more phosphorus continues to flow into the pond from septic systems, fertilizers, and stormwater runoff.

“Obviously you have to do the in-pond treatment…but you also have to control the inputs,” he said.

George (Chuckie) Green, the director of natural resources for the Mashpee Wampanoag Tribe, said the Army Corps of Engineers is conducting a feasibility study for dredging the phosphorus-laden bottom of the pond.

The study is expected to be completed within two years but the Corps has already made clear that any dredging would be contingent on also controlling phosphorus inputs into the pond, namely by sewering.

If dredging were to take place, Mr. Green said, “You’ve got a 30-year window and then you’ll be right back in the same spot if you don’t sewer.”

The Town of Mashpee already has a plan in place to build sewer systems in a number of locations throughout the town. However, the area nearest to Santuit Pond is not addressed until phase three of the plan.

Constructed in five 5-year phases, Mashpee’s Watershed Nitrogen Management Plan aims to address the nutrient pollution that has severely impaired not only Santuit Pond but also Popponesset Bay, Waquoit Bay, the Mashpee River and various other water bodies in town.

Phase one of the plan focuses on sewering areas in the Mashpee River watershed, which includes Popponesset Bay, reported as having the worst nitrogen pollution in southeastern Massachusetts.

A start to the sewering laid out in the management plan has been delayed since the plan was completed in 2017. In August selectmen voted 3-1 to remove articles that would have begun raising the funds to institute phase one of the plan. No pipes have been laid.

Meanwhile, issues with cyanobacteria at Santuit Pond have prompted some to suggest moving the sewering of the area near the pond to an earlier phase of the plan.

Mr. Gottlieb suggested that, as the town takes on other efforts to mitigate cyanobacteria growth on the pond, they also “talk to the sewer commission about what it would take to accelerate the sewering timeline for Santuit Pond.”

As the plan stands, sewering near Santuit Pond is more than a decade away.

In the meantime, Mr. Gottlieb said, getting a move on with other sewering projects in town could provide competitive advantage for an eventual dredging project at Santuit Pond, should the Army Corps of Engineers recommend dredging the pond.

“Seems like a good time to start ramping up the work that’s been done to date and elevate it to another level so we can get this taken care of,” he said. “I think that will help elevate this project.”

For years efforts to mitigate the amount of phosphorus leaching from the pond bottom have been in place.

But without significant changes to the external sources of phosphorus flowing into the pond, those efforts have become overwhelmed.

Since 2011, six solar water circulators known as SolarBees have been in place at the pond. By circulating oxygenated water to the bottom of the pond, the SolarBees help to stop the phosphorus in the sediment from leaching into the water.

While the SolarBees slashed cyanobacteria growth in the pond in half for a number of years, the blooms have been back in full force since 2017, when seven inches of rain swept phosphorus from the watershed into the pond, Mr. York said.

A seventh SolarBee installed earlier this year has failed to stop the bloom from returning.

“SolarBees aren’t designed to control external loads, they’re only designed to keep the phosphorus in the mud in the pond,” Mr. York said.

The Mashpee director of natural resources said his department, as well as the health and conservation departments, are now investigating new approaches to addressing the cyanobacteria issue, including possibly harvesting the algae from the surface of the pond.

Mr. York noted some companies have started harvesting the cyanobacteria algae on an industrial scale and turning it into a foam for use in shoes and other products, such as paddleboards.

Using technologies to harvest algae could help reduce the amount of phosphorus recycling through the pond, he said.

“Any algae removed is going to be removing phosphorus,” Mr. York said.

Asked by Selectman John J. Cotton for cost estimates for such harvesting procedures, Mr. York replied, “We haven’t gotten that far yet, we just started looking at it.”

Reducing the use of detergents and fertilizers near the pond is another step that could be taken.

“The first thing the town should do is put out an advisory to get everyone that lives on that side of the pond to stop using any phosphorus detergents, soaps, or fertilizers,” Mr. Green told the selectmen.

Mashpee Conservation Agent Andrew R. McManus also suggested to the selectmen that the town look into acquiring private roads in the vicinity of Santuit Pond so that improvements to stormwater infrastructure can be made by the town.

Restoring an abandoned 10-acre cranberry bog near the pond back into a wetland could also help to reduce the nutrient problem in Santuit Pond, Mr. McManus said, since the wetland could be used as a “nutrient sink.”

“That bog is a perfect candidate for wetland restoration,” he said.

The selectmen asked the department heads from conservation, health, and natural resources to further flesh out the proposed short-term mitigation efforts and bring expanded proposals before them next month.

While comprehensive long-term solutions like sewering and dredging remain years in the distance, the pond’s cyanobacteria problem is unlikely to subside anytime soon.

“Be realistic that it’s going to be green for a while,” Mr. Gottlieb said.

Still, town officials say short-term efforts to reduce the phosphorus inputs into Santuit Pond and educate the public can only help.

In addition to the phosphorus build-up already in the pond, more phosphorus continues to flow into the pond from septic systems, fertilizers, and stormwater runoff.

Issues with cyanobacteria at Santuit Pond have prompted some Mashpee residents to suggest moving the sewering of the area near the pond to an earlier phase of the town's wastewater plan.