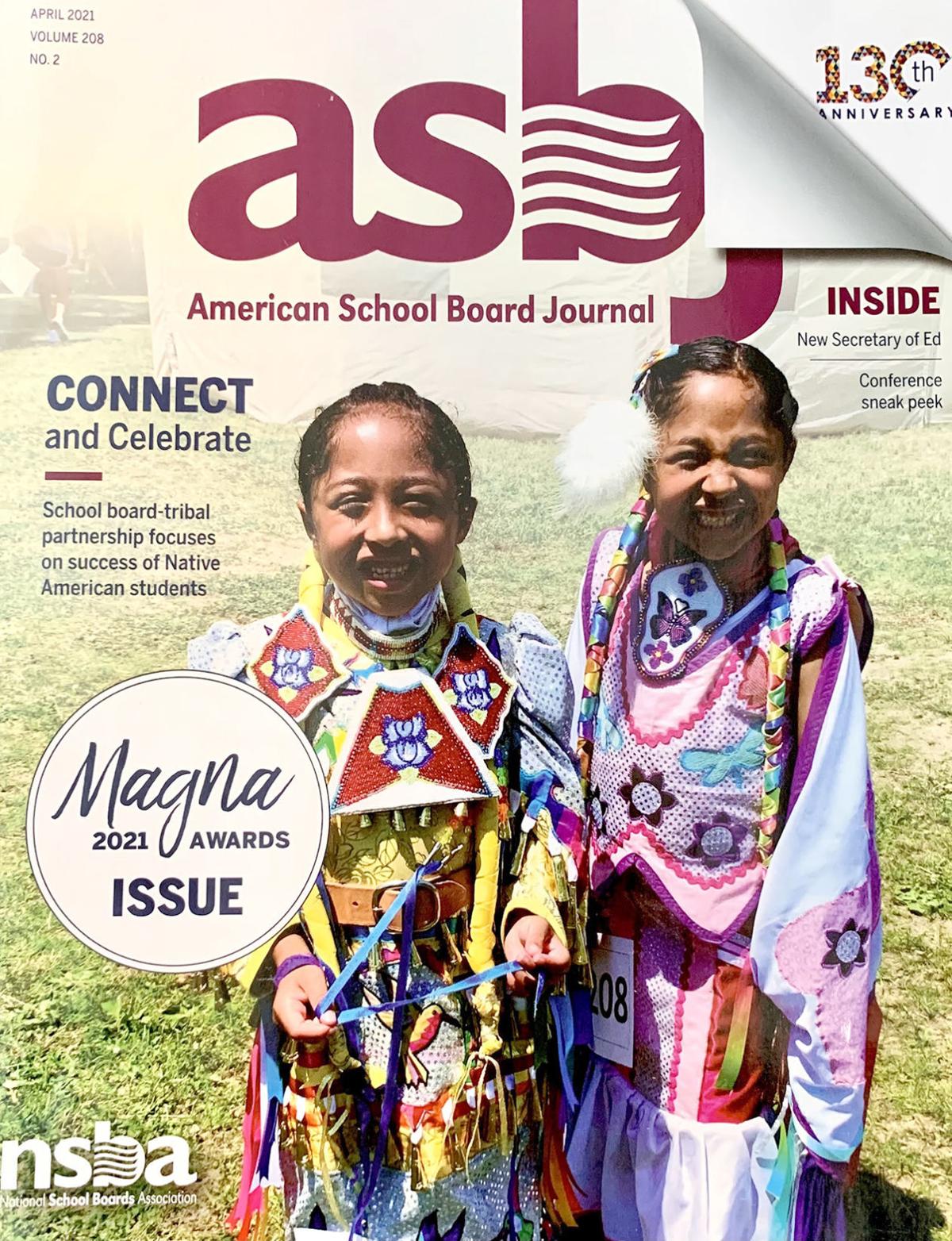 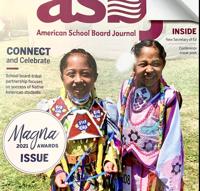 Mashpee is featured on the cover of the April edition of American School Board Journal magazine. 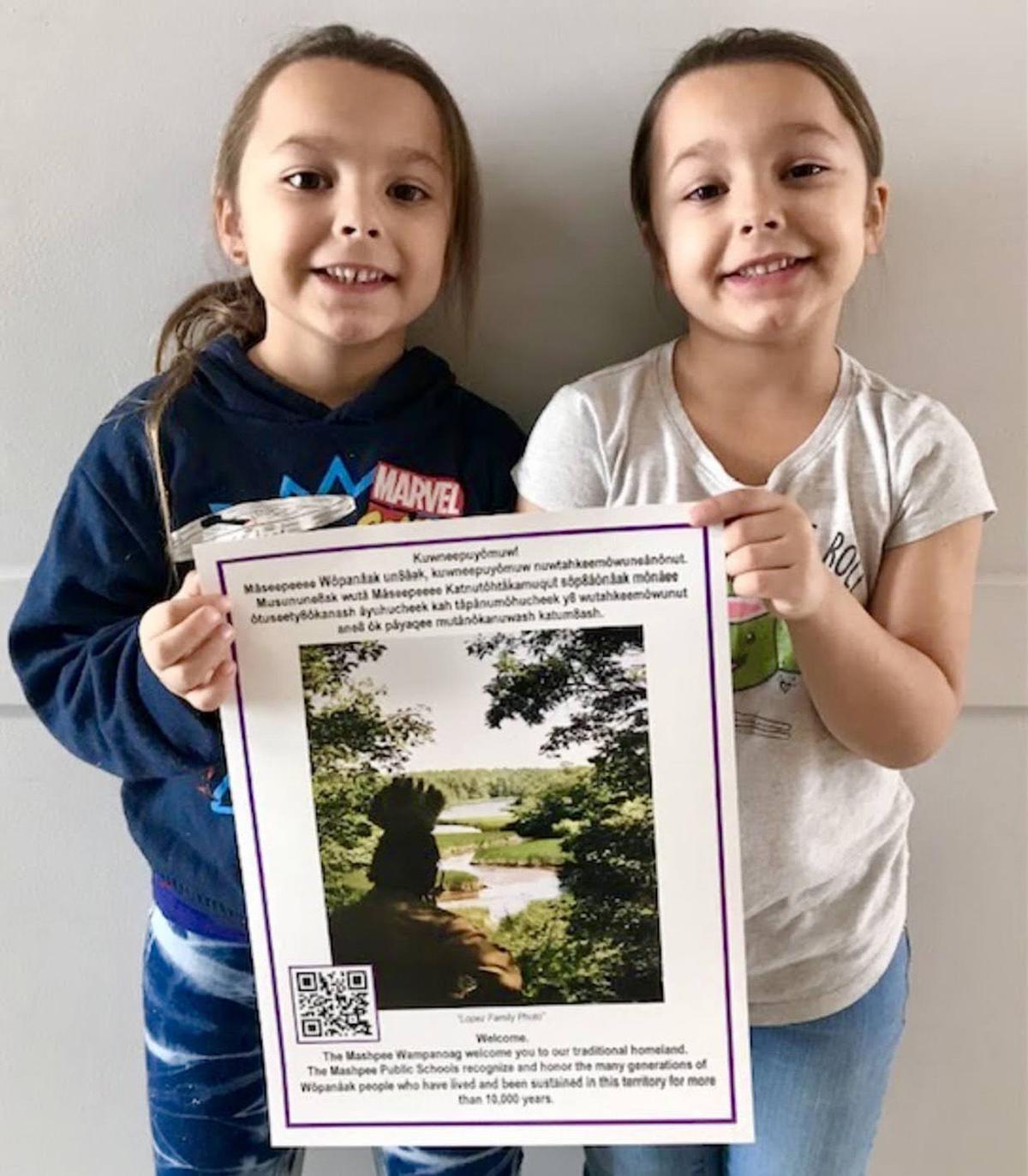 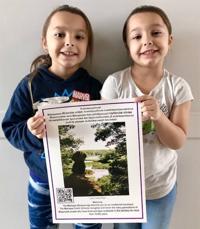 Mashpee students stand with a poster that is displayed in schools. It has text in Wôpanâak and English.

The National School Boards Association, or NSBA, selected Mashpee Public Schools as the 2021 Magna Award Grand Prize winner for its commitment to equity.

The Magna Awards go to school districts that advance equity and break down barriers for underserved students. Mashpee was honored for its school committee’s working partnership with the Mashpee Wampanoag Tribe. This partnership has helped create an inclusive district that recognizes and celebrates Wampanoag heritage and culture. It also aims to advance the academic growth and social-emotional well-being of Wampanoag students through culture-based educational principles and practices.

In total, only three school districts received the grand prize, which was broken down by enrollment. Mashpee was the winner for the “under 5,000” enrollment category.

Mashpee Public Schools was selected from independent panel of school board members, administrators and other educators who met in December.

By winning the grand prize, Mashpee Public Schools receives $5,000, the opportunity to run a master class at NSBA’s virtual conference this month. Also, the district is featured on the cover and in the pages of the April edition of the NSBA magazine, the American School Board Journal.

“When you’re recognizing the tribe’s heritage and culture and celebrating that, you’re improving the academic growth and social and emotional well-being of all of our students,” said Nicole Bartlett, the school committee’s vice chairwoman.

Even though this partnership is only being honored and recognized this year, it is a result of years of hard work by the school committee and the tribal council.

During the 2017-2018 school year, these two groups met jointly for the first time ever. As a result, there were two important outcomes from this meeting, Ms. Bartlett said. First, a standing agenda item was added to the school committee meetings: A tribal representative is given a slot to speak, voice any concerns and share thoughts. Second, a leadership team was created consisting of members of the tribe and the school.

Ms. Bartlett called this a “new way of doing business” and something she was very proud of that the two sides have accomplished.

“I really wanted to make this partnership very deliberate and consistent throughout the year. Some of the people who went through Mashpee schools as tribal members didn’t always have a good experience,” she said. “Our children are really what connects us. That’s why I feel the schools were just really well-positioned to take a leadership role by formally partnering with the tribe to support the 150-plus native students we have in our school.”

In just four short years, the list of accomplishments is quite lengthy: Mashpee Middle-High School has offered School-to-Career placements at the Tribal Government Center’s Language Immersion School. There are also annual varsity basketball games played at the government center. Three levels of Wôpanâak, a Wampanoag language, are offered at the high school and another will be offered to 7th graders soon. Native American Awareness Week is held at all of the schools.

“We’re not making decisions about what’s best for native students. We are asking the tribe to tell us what native students need and also identifying opportunities to educate non-native students and our staff about the Mashpee Wampanoag culture, language and heritage,” Ms. Bartlett said. “There’s no tokenism here. We are not representing their culture; they can represent their culture.”

Congratulations to all on this thoughtful partnership that puts children at the forefront. “Our children are really what connects us.” Indeed.