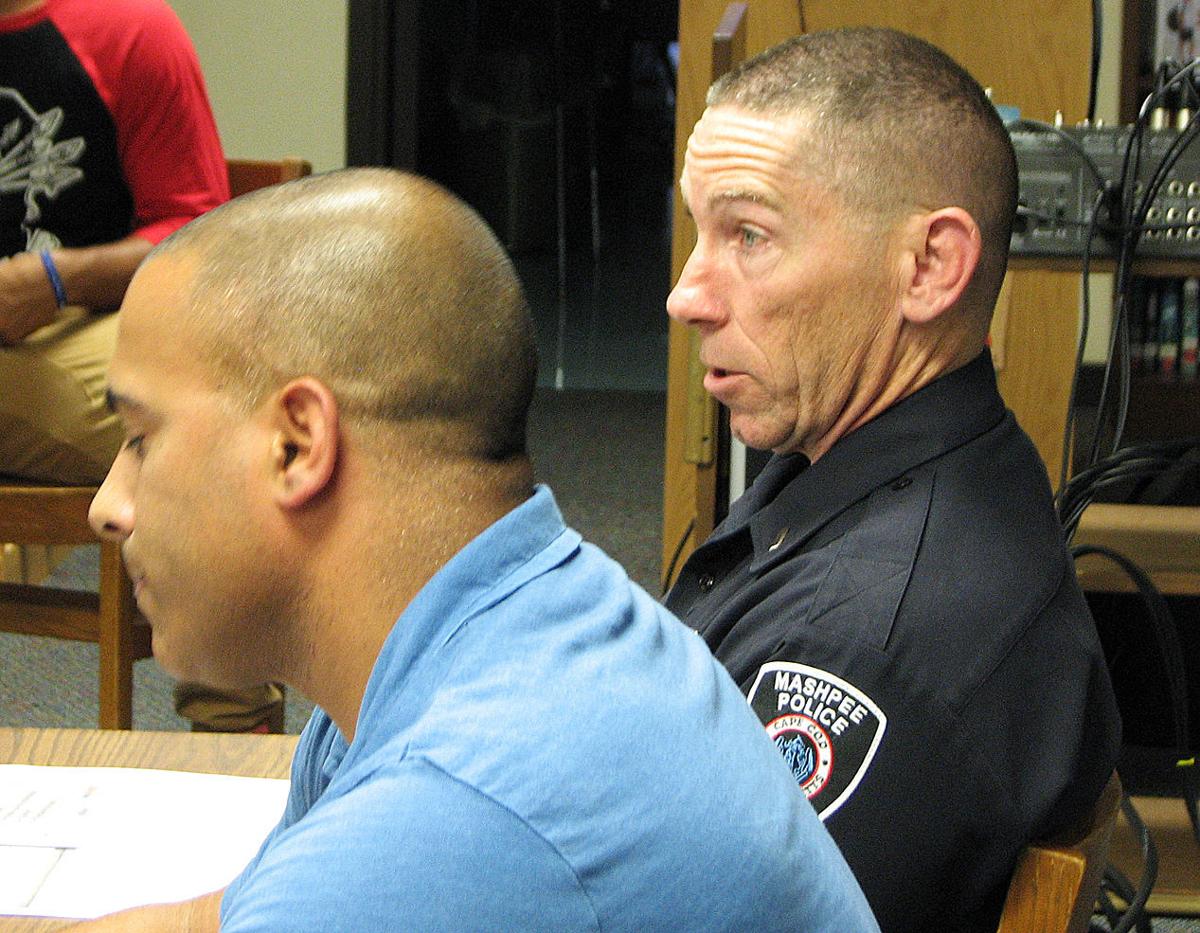 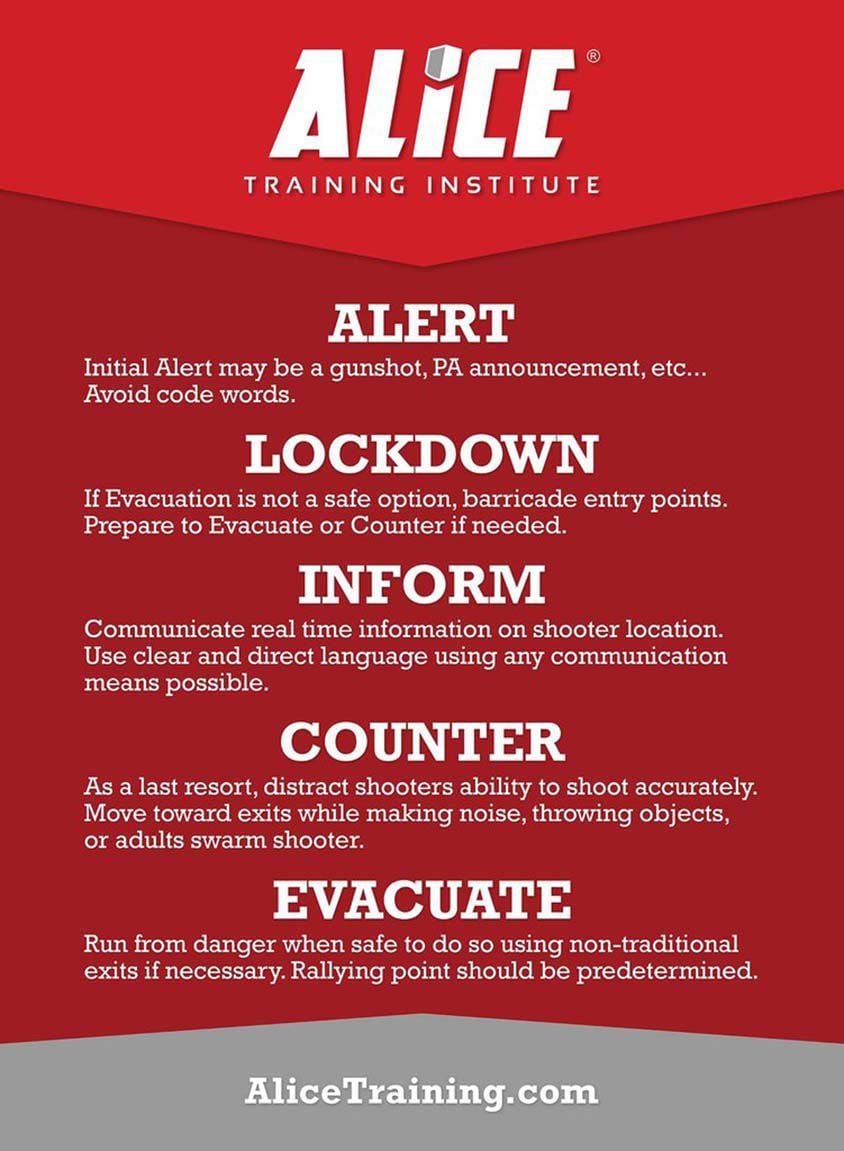 A copy of a poster with guidelines for ALICE training

A copy of a poster with guidelines for ALICE training

Imagine you’re a teacher in a classroom, when these chilling words come over the intercom: “Emergency lockdown. Active shooter in the building. This is not a drill.”

Your students are looking to you for direction. You don’t know how long it will take for police to arrive.

What do you do? What do you say to your students? What choices do you have?

The Mashpee Police Department and the Mashpee Public Schools are considering these questions and others this summer as they begin to adopt an emergency training program called ALICE.

In doing so, Mashpee is joining a growing number of school districts across the Cape and nationwide in reevaluating and updating protocols on how to deal with active shooter or violent intruder situations on school grounds.

At the Mashpee School Committee meeting on July 20, Mashpee Police Lieutenant Sean Sullivan and Detective William Cuozzo, who is ending his three-year term as school resource officer, gave a presentation on plans to train administrators, teachers, staff and students.

The steps in the ALICE program are not intended to be followed in chronological order, Det. Cuozzo said, and the entire program emphasizes situational awareness and communicating as a team.

School administrators will go through a similar training session in Plympton August 18 and 19. This group will include interim superintendent Patricia M. DeBoer and the principals and assistant principals of the three Mashpee schools.

Det. Cuozzo said that once a new school resource officer is hired in early August, that person will also take part in the ALICE training and will work with administrators, faculty, staff and students throughout the coming school year and beyond.

“ALICE is not about teaching students to fight an adversary,” Lt. Sullivan told the committee. “It’s about evasion and escape in a lockdown situation.”

According to the ALICE Training Institute website, ALICE was developed by a law enforcement official and an educator in Texas soon after the Columbine High School massacre in Colorado in 1999. As of this month, the institute has worked with more than 3,700 K-12 schools across the country.

ALICE training encourages taking a proactive approach in dangerous situations. In the past, protocols called for an announcement to the school that an intruder had entered the building. Students and staff would then barricade themselves in the room and wait for the threat to pass.

The issue with taking the passive approach is that in recent school shootings, such as the one at Sandy Hook Elementary in Connecticut in 2012, locked doors have not prevented gunmen from entering and taking aim.

In the training sessions, trainees are presented with different realistic scenarios that are demonstrated using both the existing lockdown protocols as well as the newer ALICE initiative.

The training extends to anyone who is regularly in the schools, including nurses, counselors, cafeteria workers, janitorial staff and school security.

After the officers’ presentation, Ms. DeBoer commented, “The administrative team has met on this topic, and we want to move in this direction.”

“It will be beneficial to have that hands-on, scenario-based approach,” she added, “though it is not feasible financially to send every teacher to training individually.”

Mr. DeBoer said she plans to schedule a four- to eight-hour block in the fall to train teachers and staff en masse after administrators receive training certifications.

Payment for the August training is $595 per person, and Ms. DeBoer said it will be paid for out of the district’s professional development funds.

Kenneth C. Coombs School Principal Paul M. LaBelle told the committee he came to Mashpee from a district that implemented ALICE training in 2013. As former principal of Assawompset Elementary School in Lakeville, he said all school staff there received training and that older students in the upper grades were also engaged in the program.

“We felt empowered that we could make a difference in a crisis,” Mr. LaBelle said.

MaryKate O’Brien, principal of Quashnet School, told the Enterprise last week, “It’s critical, based on what the research shows, that this is how we should handle school safety.”

In an interview with the Enterprise last week, Det. Cuozzo said the older “shelter-in-place” model is outmoded and even potentially dangerous.

According to Det. Cuozzo, research from insurance companies and other sources shows that the survivability rate is higher with ALICE. He cited the Virginia Tech shooting in 2007 as an example of a use of ALICE that saved lives that research showed would have been lost if the older model had been followed instead.

He emphasized that the objective to counter, or engage the intruder, is intended as a last-ditch effort when all other options have failed.

“We’re not advocating for young students to tackle a gunman,” he said. “We are empowering teachers and students who are old enough to comprehend the situation to have more choices. We can help them create solutions for securing a room, evacuating a building or swarming a shooter.”

During the training, Det. Cuozzo said he was able to play the role of the active shooter using an Airsoft gun while all participants wore safety goggles.

“The other students threw tennis balls at me,” he said. “It was amazing how easy it is to get distracted. I only got off two or three shots.”

Det. Cuozzo stressed that distraction rather than fighting is the goal in countering an intruder.

“We were also taught a swarming technique to subdue a shooter physically, as a group,” he said.

Most active-shooter situations conclude in four to eight minutes, Det. Cuozzo said, “either ended by police or the gunman commits suicide.”

“At any given time, we have four or five officers working the street,” Det. Cuozzo said. “It can take up to 45 minutes for police to respond to a report of an intruder. Most of the time, the incident is over by the time the officers suit up and make entry.”

This means, Det. Cuozzo said, that the most crucial decisions often must be made in the school and in the moment by staff and students.

Teachers, he said, should be working with students ahead of time similar to how they now conduct fire drill training.

“Any of the ALICE steps can be helpful. You don’t have to go in chronological order,” he said. “If evacuating is the first thing you can do, then get out of the building.”

“Now we want everyone to know where the gunman is,” he said. “It gives teachers the option to evacuate or change locations if they know the gunman is elsewhere in the building.”

Det. Cuozzo acknowledged that this is a difficult topic for people to face, but it is the reality of keeping staff and students safe if something were to happen.

“You don’t think it’s going to happen here, but you just don’t know,” he said. “We have to be prepared.”

Other schools on Cape Cod that have implemented ALICE include Sandwich, the Monomoy Regional School District, and Upper Cape Cod Regional Technical School.

According to Nancy Taylor, superintendent of the Falmouth Public Schools, the district is now using the shelter-in-place model and has no plans at this time to adopt ALICE.

“I have been in conversations with the Falmouth chief of police, as we are always striving for best practices,” Ms. Taylor said. “We are in discussion about this.”

“It’s been a two-year process since 2014 to roll out the program in Sandwich,” she said, “and I’ve been working with a circuit of certified instructors who are helping each other with trainings.”

ALICE training started in Sandwich in the 2014-15 school year with grades 7 through 12 and moved to kindergarten through grade 6 in 2015-16. As of June, all current staff and students have been trained, Officer Cabral said.

“The training has been awesome,” she said. “Teachers have told me it’s had an impact on both their professional and personal lives.”

“People can help save themselves, and ALICE training is not restricted to schools,” she said. “Emergency situations like this can happen in movie theaters, grocery stores, anywhere.”