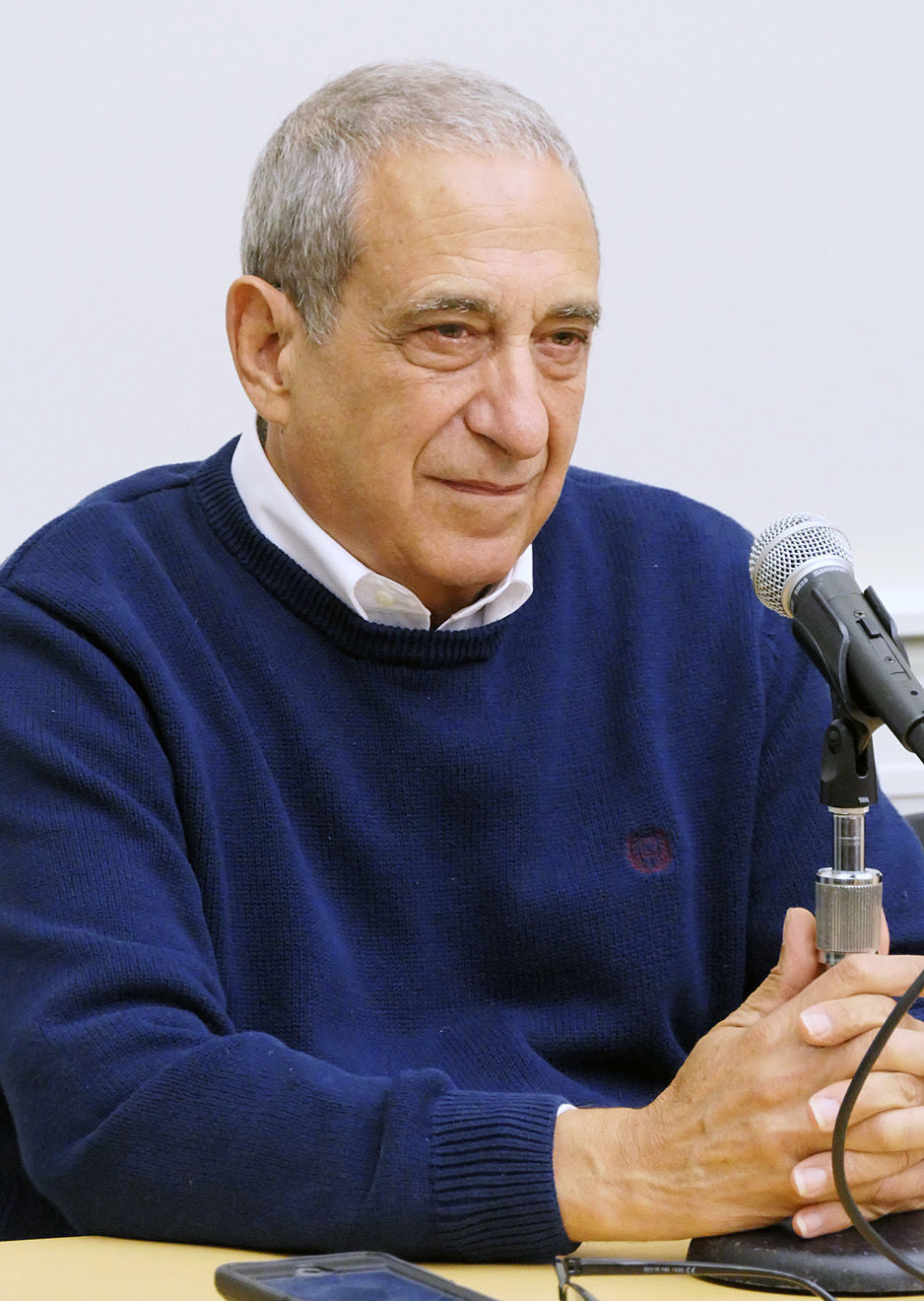 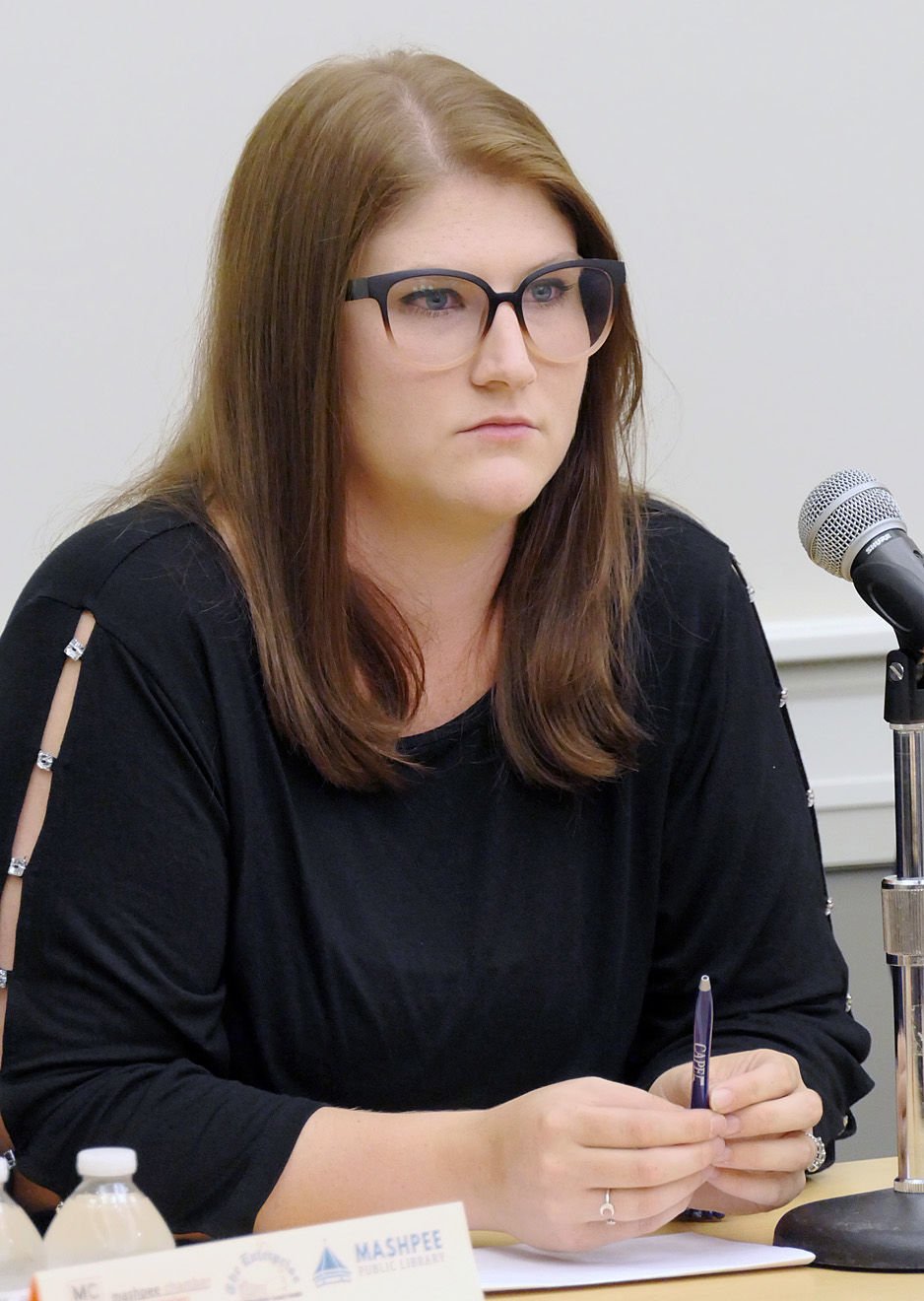 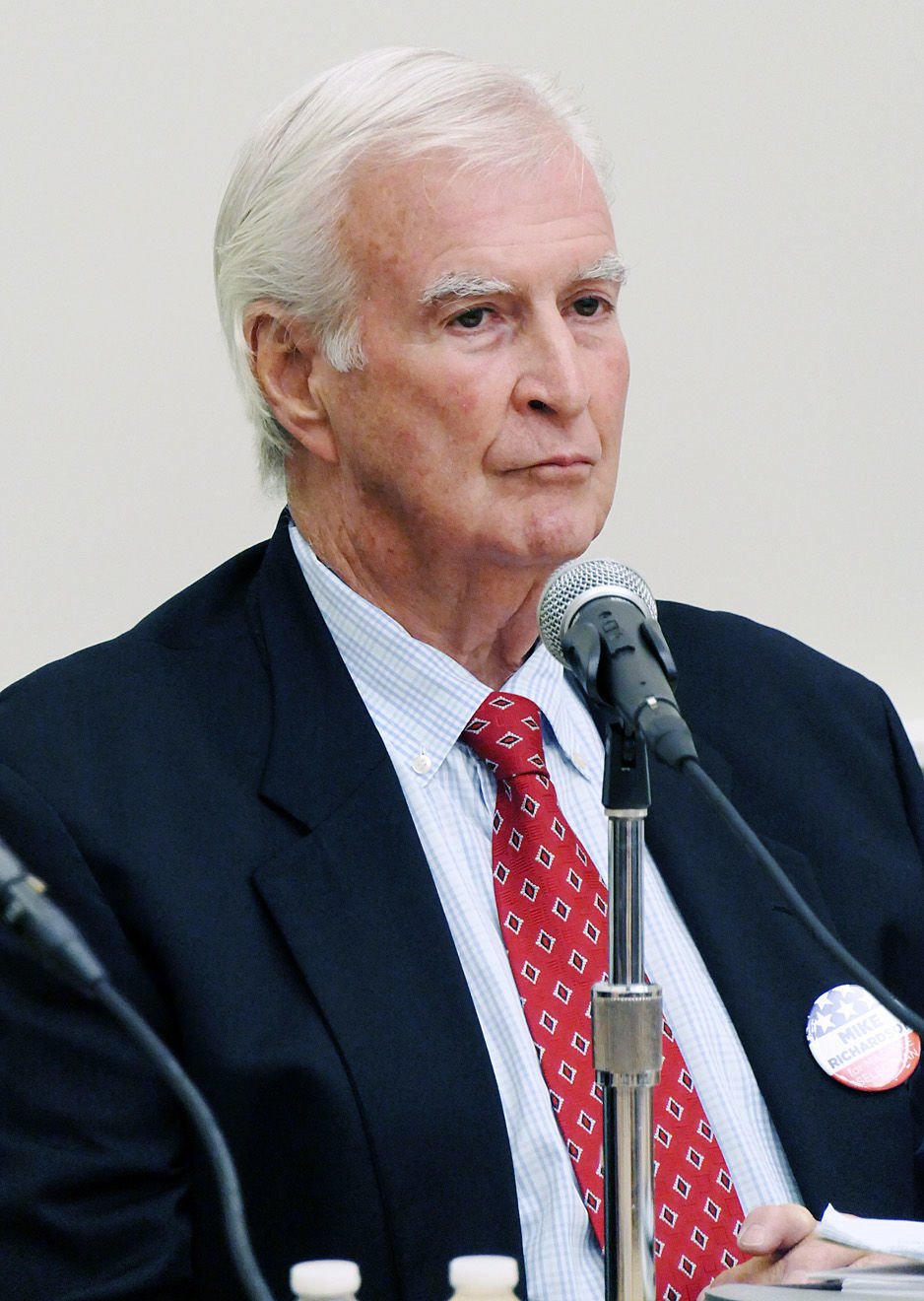 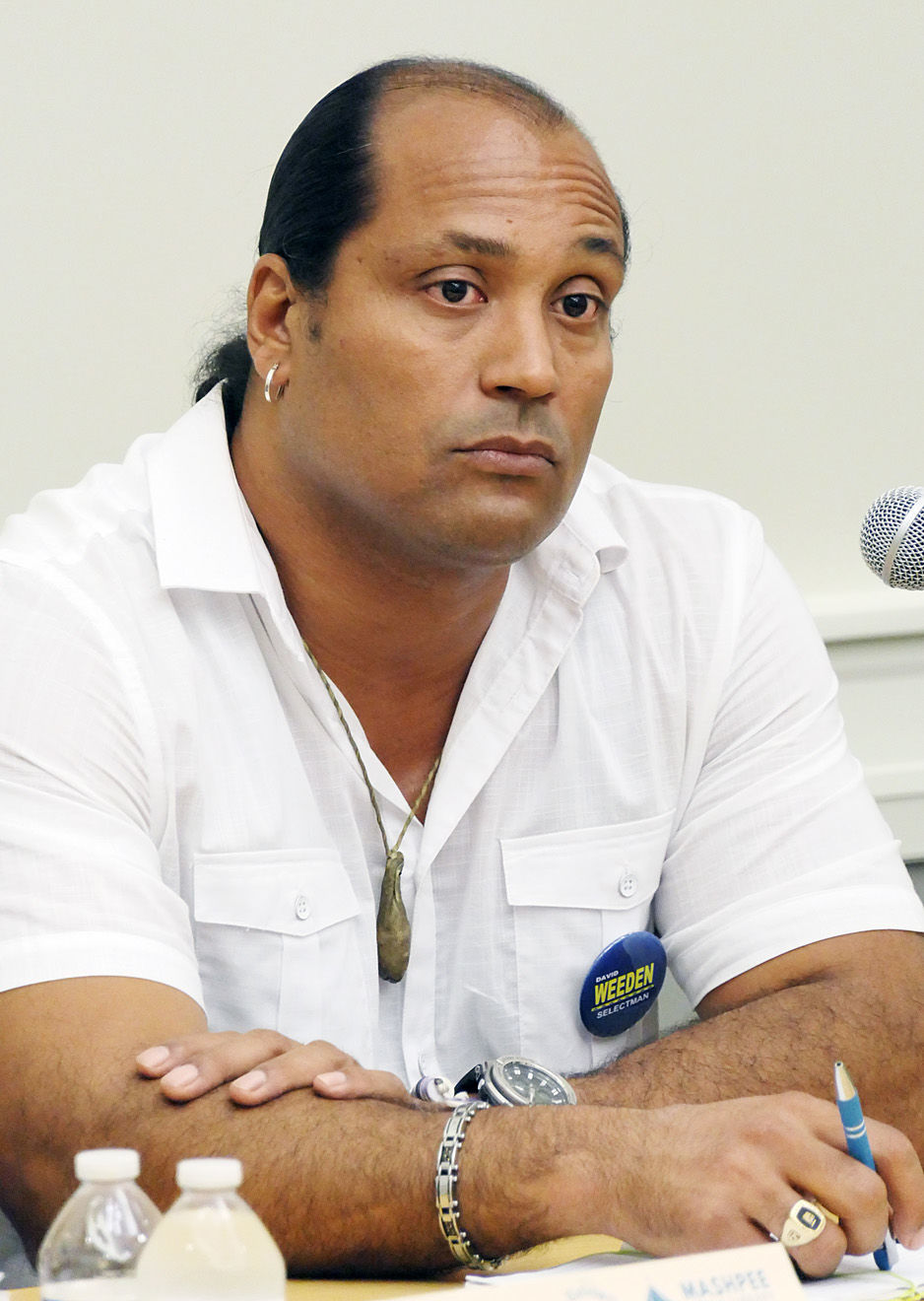 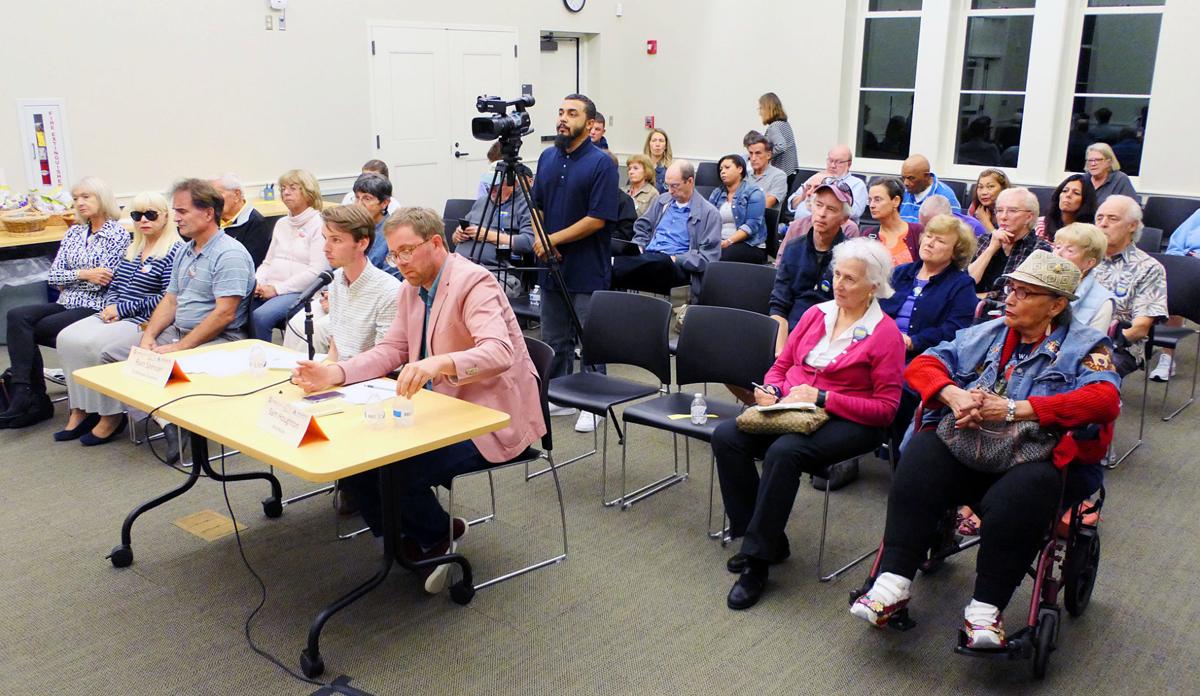 Members of the public attend the candidates night at the Mashpee Public Library.

Members of the public attend the candidates night at the Mashpee Public Library.

Candidates vying for a seat on the board of selectmen answered questions on the opioid epidemic, wastewater management, the school budget, and various other topics at a forum at the Mashpee Public Library on Wednesday.

A special election scheduled for Tuesday, October 1, will have voters decide which of the four candidates—Robert F. Bono, Elana C. Doyle, Michael R. Richardson, and David W. Weeden—will fill an eight-month term on the board left open by the death of John Cahalane earlier this year.

Voting will take place from 7 AM to 8 PM at Parish od Christ the King on Jobs Fishing Road. Absentee ballots are available at the town clerk’s office at Mashpee Town Hall, 16 Great Neck Road North.

Asked if they would put local tax revenues toward addressing the opioid epidemic, all candidates said that they would.

Ms. Doyle said she would put tax money toward prevention programs in schools to teach children the dangers of drugs from a young age.

“I’ve known more people from high school who have died than have gotten married in my friend group,” Ms. Doyle said.

She singled out the Drug Abuse Resistance Education program, better known as D.A.R.E., which has been implemented in public schools across the United States for decades.

“I can tell you first hand that the D.A.R.E. programs when I was in school actually prevented me from trying some of those substances later on in life,” she said.

Mr. Richardson, who served two previous terms as selectman starting in 2009, pointed to income from marijuana sales in Mashpee as a source of revenue which should be spent to address the opioid epidemic.

“I think education and treatment go side by side,” he said.

Mr. Weeden, a member of the Mashpee Wampanoag Tribal Council and former planning board member, agreed that money should go to educating children at a young age as well as treatment for drug users.

“Prevention at a young age would be your starting point, but then you also need to be giving the support system to people who are actively trying to get off,” he said.

Giving those that have completed treatment a “second chance and help getting them a job or something positive in their life” is also important, Mr. Weeden said.

Mr. Bono said he would also look to put money toward addressing the opioid epidemic and suggested turning to town officials to determine how best to allocate the money.

“The town spends a lot of money on the talent, the police department, the fire department and those people do a great job,” he said. “Why don’t we go to those people and find out where they’re coming from on this issue and what they think would be the most effective?”

On the wastewater issue confronting the town, the candidate chosen as selectman next week will participate in multiple special meetings scheduled by the board in coming months to address the issue.

Mr. Weeden pointed to those meetings as a good step toward educating the public. He expressed dismay at the state of the rivers and waterways, noting that in the Mashpee River “there’s muck that’s being built up over the years that’s so thick that some areas are difficult to walk through, it’s almost like quicksand.”

He called for slowing development in the town to allow wastewater infrastructure to catch up to the continuous development Mashpee has seen over the last several decades.

He also said that the most polluted areas, such as the Mashpee River and Santuit Pond, should be addressed first.

On the wastewater issue, Mr. Bono called for “bold new ideas” and stated that his primary goal would be to make sure that the cost of the infrastructure project is not placed on the taxpayer.

“My primary goal no matter what we do with this is how will we get the burden off the taxpayers and come up with creative new ways to fund whichever way we’re going to go with this,” he said.

Mr. Bono suggested the town could hire an individual whose job would be specific to applying for state and federal grants.

Ms. Doyle said that she thought it was worth waiting to see if Joint Base Cape Cod could prove to be a feasible option for treatment of the town’s wastewater before building a new wastewater treatment plant in town.

At least two entities are vying for control of a wastewater treatment facility located at the base. A five-way study between the Upper Cape towns and Barnstable has proposed upgrading that plant to treat wastewater from each of the five towns, though construction is not likely to begin for almost a decade.

Ms. Doyle said that she expects the selectmen will know by May Town Meeting whether the base will prove to be a feasible spot.

She said that if the plan is not feasible, she will move forward with constructing a wastewater plant in town. If it is feasible, she would like to see cost comparisons and a time frame for the project, she said.

He stated that the time to act on the wastewater issue is now and the waters which are the most polluted should be addressed first. “The worst place is the first place to start,” he said.

Mr. Richardson said he is in favor of taking Community Preservation Act funds and using those funds for wastewater. That, combined with an unknown amount of principal forgiveness, and funding from other sources, he said, would reduce the burden on the taxpayer.

When the questions turned to affordable housing, Mr. Bono, a property manager and the owner of La Plaza Del Sol on Route 130, pointed to his real estate experience.

“As someone in the real estate field, I’ve actually been dealing with this for over 20 years,” he said, noting that the problem of affordable housing has existed on the Cape dating back to the early 1900s.

He said that one of the “biggest problems is jobs on Cape Cod, good jobs.” Mr. Bono suggested allowing single-family homes to rent out additional rooms as additional dwelling units so long as their homes are up to code.

“How it is right now is not an easy process,” Ms. Doyle said, “versus how they’re working to change it is very responsible and it’s also incentivizing.”

Mr. Weeden also stated his support for incentivizing ADUs. He also suggested that tax-taken lands owned by the town should be used for affordable housing.

Mr. Weeden noted the lack of affordable housing especially affects young people on the Cape and that both family units and one- and two-person apartments are necessary.

“We have Mashpee Commons who can, with some controlled growth, and working with the planning board to find a solution, will build more housing and within that additional housing will be more affordable housing,” he said.

The four candidates also offered their thoughts on how best to balance the school budget with other town priorities.

Mr. Weeden stated that the children in Mashpee Public Schools “are our future” and that he “wouldn’t start with the school” when making budget decisions.

He pointed to the growing need for schools to have access to technology as one reason why the school budget is particularly important.

Mr. Bono called the current school budget “adequate.” He said that what exactly the money is being spent on should be considered when looking at the school budget.

Ms. Doyle commended the Mashpee school system, noting she has a preschool student enrolled in the public schools.

Mr. Richardson noted that since these are the children of the town, the town should “spend the appropriate amount of money” on the schools.

Graduation rates, drop-out rates, teacher and staff salaries are things that should be considered when looking at the overall budget and considering whether spending at the school is effective, he said.