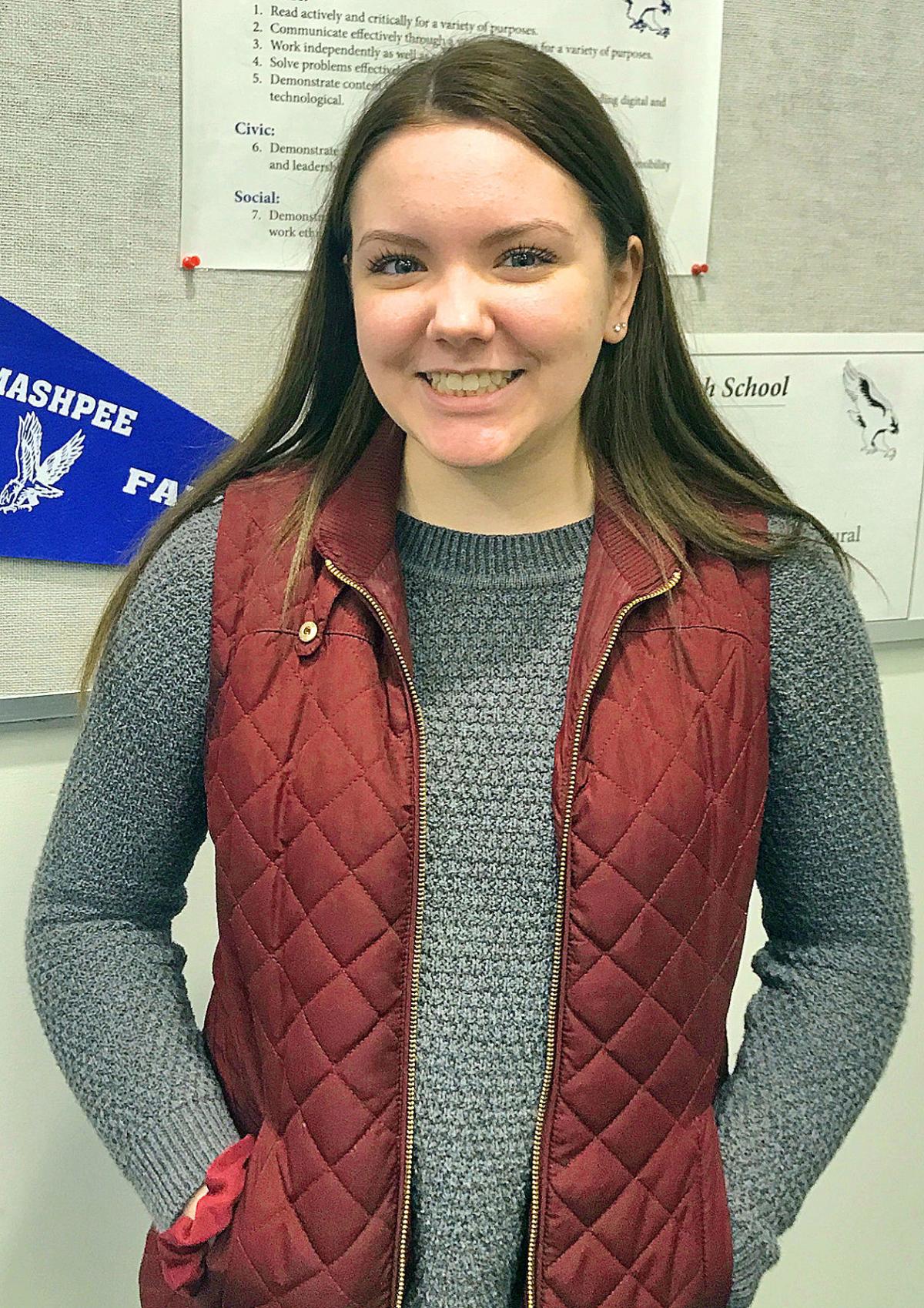 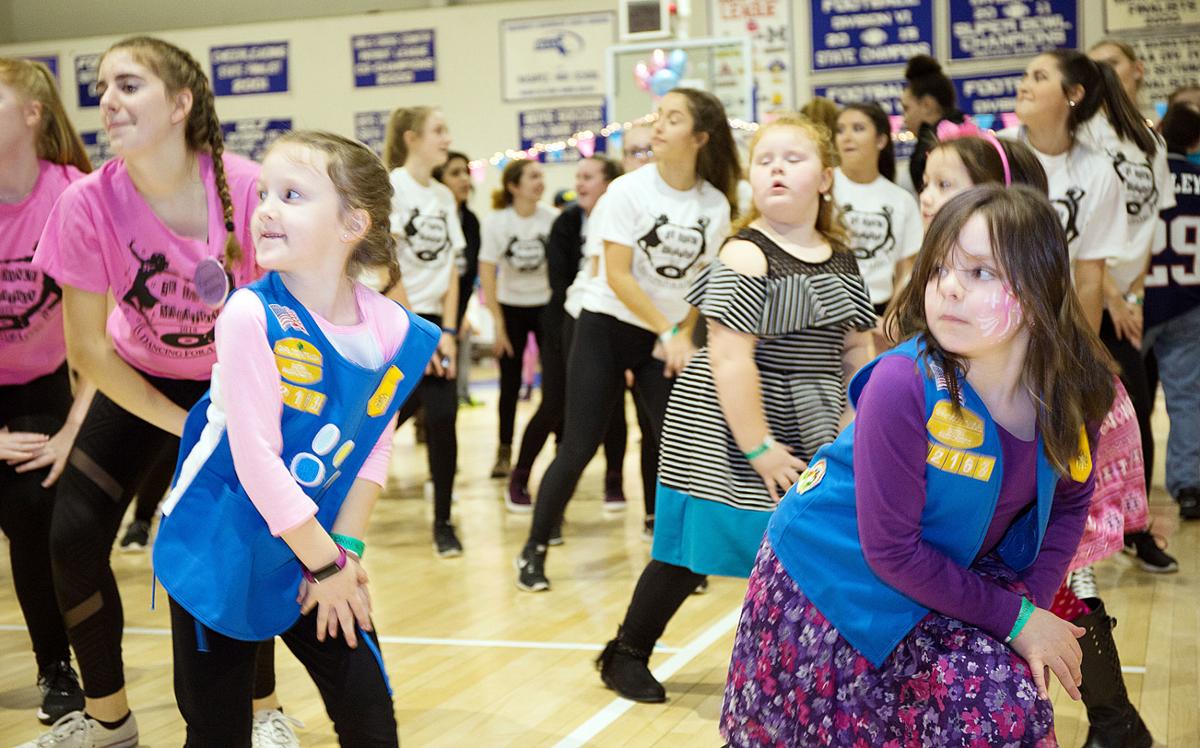 Kyla Fougere(cr) 6 Adalyln(cr) Smith 6 both members of the Mashpee Daisies troup dancing on the floor for the 2018 Dance for a Cure night at Mashpee High School.

Kyla Fougere(cr) 6 Adalyln(cr) Smith 6 both members of the Mashpee Daisies troup dancing on the floor for the 2018 Dance for a Cure night at Mashpee High School.

Shaela Alves has been dancing since she was two years old. As she prepared to enter her final year at Mashpee Middle-High School, Shaela knew she wanted her senior project to involve dance in some way.

On Saturday, February 2,she will get to share her love of dance with an eager crowd at Cape Cod’s ninth annual Dancing for a Cure Dance Marathon. Shaela has been helping for months to prepare for the event, which brings together pros and newbies alike to dance the night away and raise money for ovarian and breast cancer research at the Dana-Farber Institute.

Shaela says she’s looking forward to seeing everything come together this weekend. “It’s all been preparation, so to see it finally unfold, I think that’ll be really rewarding,” she said.

Dancing for a Cure has been around since 2006. Susan Mendoza Friedman founded the organization in honor of a friend who was diagnosed with stage 3 ovarian cancer at age 51. In its 12-year history, the Cotuit-based DFAC has raised close to $450,000, said Ms. Friedman, who is also a dance teacher.

The dance marathon is scheduled to last for four hours, from 4:30 to 8:30 PM, at the Mashpee Middle-High School. An event flyer encourages participants to come and dance or cheer for others from the stands.

There will be a host of activities on and off the dance floor, Shaela said. Dancers from more than 10 Cape Cod studios—including A. Lovely Dance Studio, where Shaela takes class—will lead the crowd in easy-to-follow routines. And during rest breaks, a few studios will get to perform.

“The people who come, not all of them are dancers, so they get to learn something new,” Shaela said. And the ones who are dancers “just get to share their love and their passion and their creativity.”

The night will feature a raffle contest, a dance battle, a Patriots pep rally and more. Miss Massachusetts 2018 will also make an appearance.

For the past four years, one Mashpee student has partnered with Dancing for a Cure as part of a senior project. Shaela volunteered at the marathon last year, which is where she met Ms. Friedman, the founder.

Shaela reached out to Ms. Friedman over the summer to say she was interested in getting more involved. Her responsibilities have included printing signs, preparing raffle tickets and making buttons for dance leaders from each studio. Shaela’s project sponsor, history teacher Celeste Reynolds, is also on the Dancing for a Cure committee, which works to plan the dance marathon.

“Really, they do quite a bit of work,” Ms. Friedman said of the students. “It’s very helpful to me, and it’s a learning experience for them.”

Heading into the weekend, Ms. Friedman said her goal is to raise as much money as possible for Dana-Farber—and to make people aware of the need for continued research.

The marathon, she said, is also a meaningful event for cancer survivors. “It makes them feel not so alone,” Ms. Friedman said. “In a positive, upbeat way, we try to support them.”

For Shaela, her senior project is personal in more ways than one. Having lost someone recently to cancer, she feels driven to do her part in fighting the disease.

“I think it’s really important to give back to communities and foundations that mean a lot to you,” Shaela said. “I lost someone over the summer to cancer, so I know how hard it is. I want to be a part of ending it.”

Admission to the dance marathon is $20, and it’s not too late to get involved. Online registration is open until noon on Friday, February 1, and the doors open at 3:30 PM Saturday, February 2, for walk-in registration. More information is available by visiting www.dancingforacure.net.