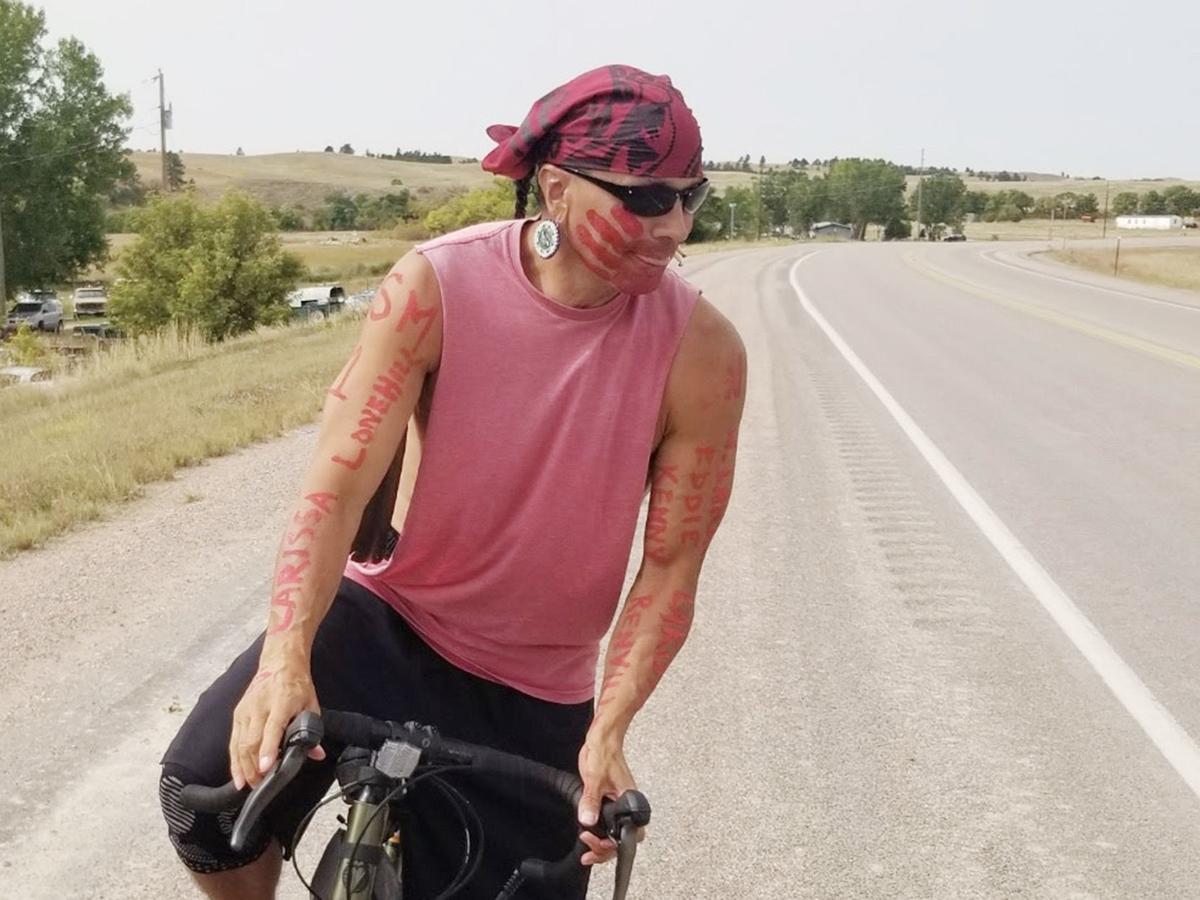 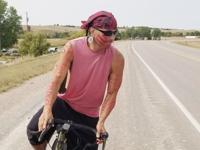 Duane Garvais Lawrence, descendant of the Colville Tribe and Fort Peck Assiniboine, rides through the Pine Ridge Reservation, land of the Oglala Sioux. The names of missing and murdered indigenous women have been painted on Mr. Lawrence's arms. 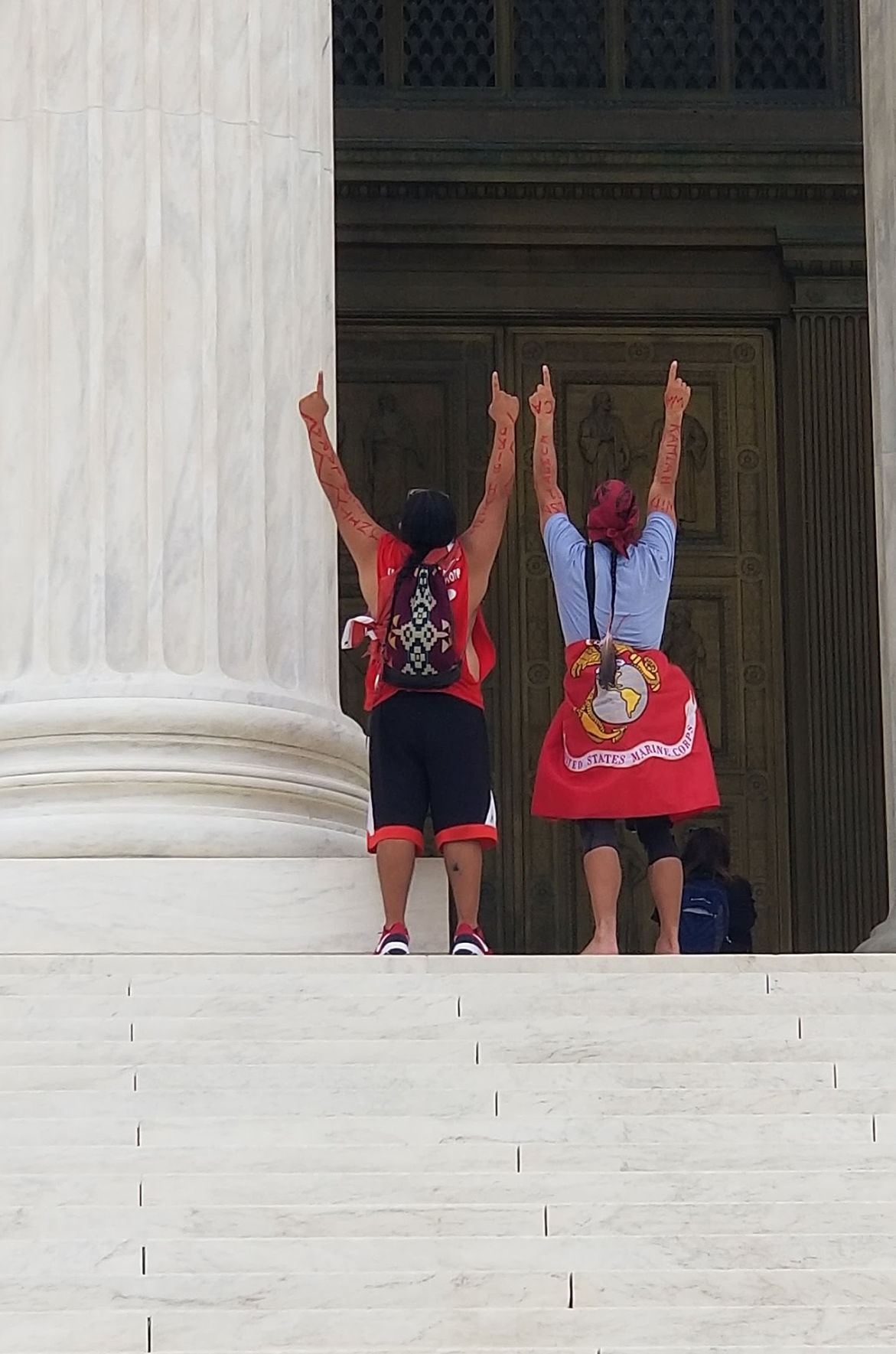 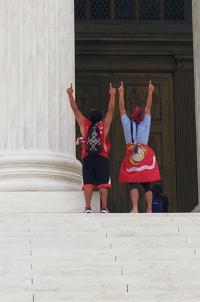 Ethan LaDeaux and Duane Garvais Lawrence on the steps of the Supreme Court. 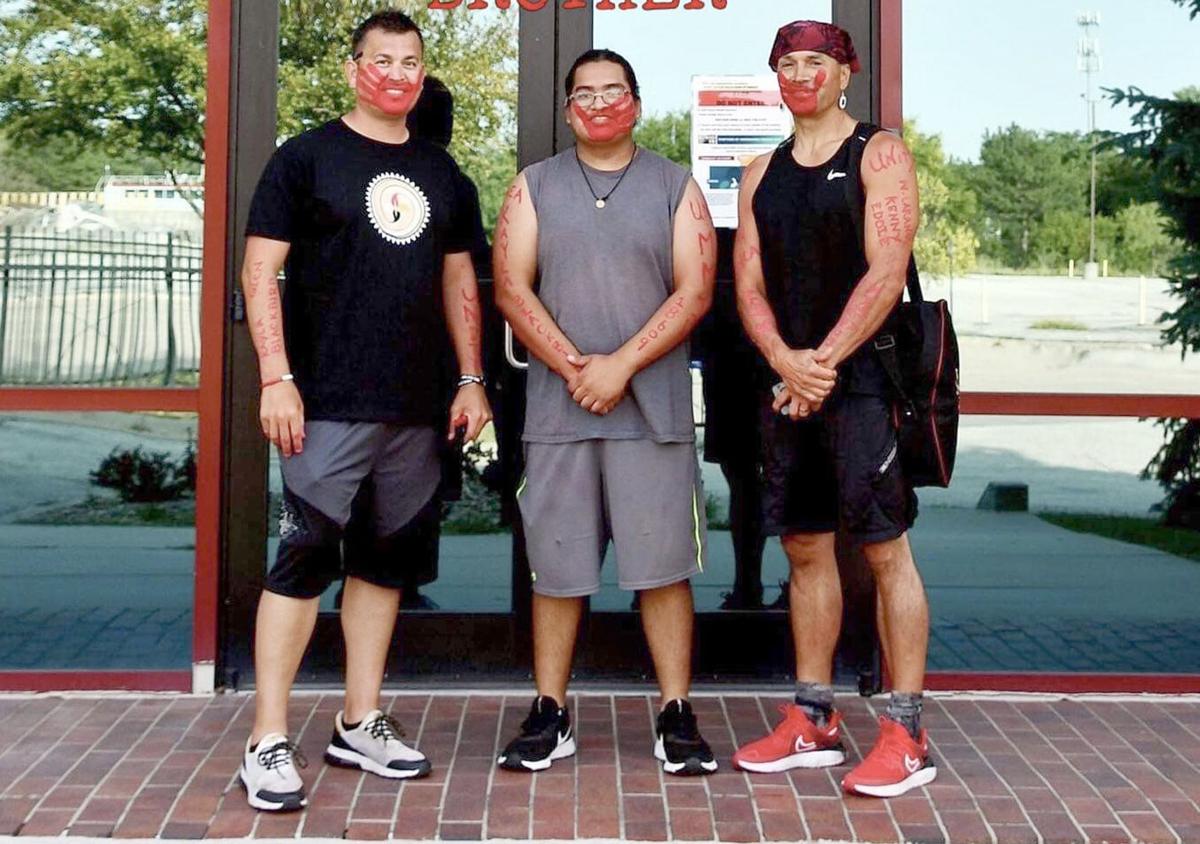 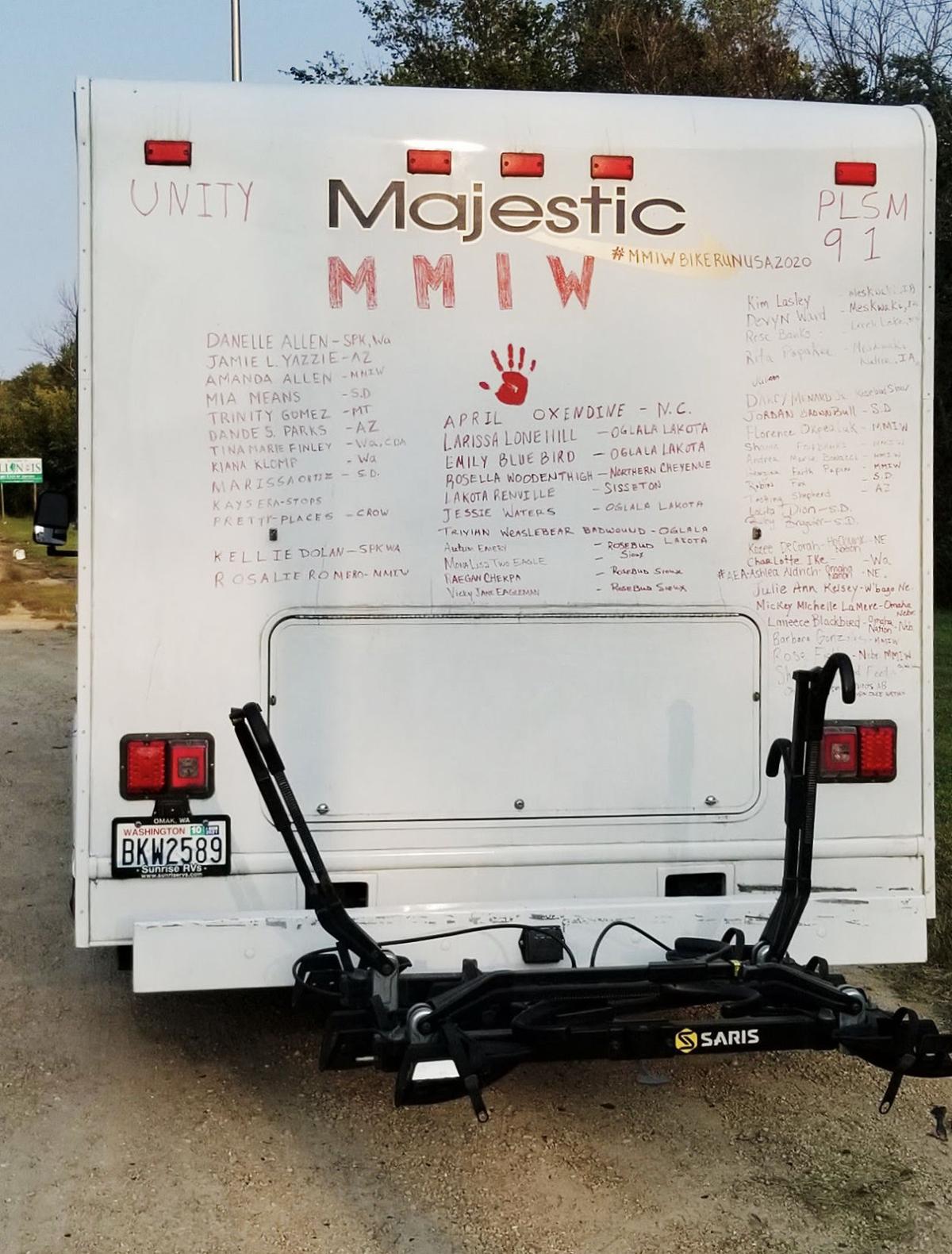 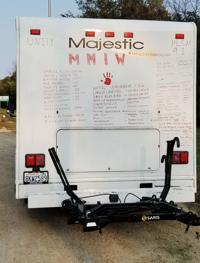 The names of missing and murdered indigenous woman adorn the back of the Warrior Runner's RV.

Duane Garvais Lawrence, descendant of the Colville Tribe and Fort Peck Assiniboine, rides through the Pine Ridge Reservation, land of the Oglala Sioux. The names of missing and murdered indigenous women have been painted on Mr. Lawrence's arms.

Ethan LaDeaux and Duane Garvais Lawrence on the steps of the Supreme Court.

The names of missing and murdered indigenous woman adorn the back of the Warrior Runner's RV.

The Mashpee Wampanoag Tribe will welcome a group of members from other Indian tribes in Plymouth October 3 as a Washington-based group of “Warrior Runners” completes a cross country trip to raise awareness for missing and murdered indigenous women.

A small prayer ceremony for the multitude of Native women who have gone missing or been found murdered throughout Indian Country will be held at 3 PM at the statue of Chief Massasoit that overlooks Plymouth Rock.

“As with our sister tribes and our people across Indian Country, women are respected and looked up to,” said David W. Weeden, a member of the Mashpee Wampanoag Tribal Council and the tribe’s historic preservation officer. “It is common practice culturally to protect your women, they’re the ones that raise our children and our future leaders.”

Mr. Weeden said “I can’t think of any instance of it happening out here” in Mashpee, but that the death or disappearance of women has hurt tribal communities throughout large swathes of the country.

“It has affected a lot of families across the country,” Mr. Weeden said. “It is devastating to communities when your young girls are being taken and horrible things are being done to them.”

For years, Mr. Weeden said, the issue of indigenous women’s disappearance or murder has been overlooked.

“As indigenous people and the first people of this continent and country, the things that affect us are often overlooked and don’t warrant the same national attention as issues facing a lot of other people,” he said.

“It really hurts to even think about it,” Mr. Weeden said of the missing and murdered indigenous women. “I have children, I have daughters and if something were to happen, I’m not sure I’d be the same.”

“That’s the way everyone should think of it. What if it is your daughter?” he said. “For nonnatives it is easy for them to not look at the issue as it doesn’t affect them.”

The group Mr. Weeden and others in the Mashpee Wampanoag Tribe will greet in Plymouth has run and biked through Native American reservations across the country with the names of the missing and murdered indigenous women painted on their bodies and adorning their RV.

When Daune Garvais Lawrence, a descendent of the Colville Tribe and Fort Peck Assiniboine, first set out from Washington on his mission to bring awareness to the issue of missing and murdered indigenous women, he did not know one such woman was a relative of his.

Only after leaving the Peace Arch in Blaine, Washington—where Mr. Lawrence began his transcontinental journey alone—would a relative inform Mr. Lawrence of Robin Fox, who went missing in 2014 at age 38 before being found dead in North Dakota.

“The spiritual significance of this is hard to explain,” Mr. Lawrence said.

For three days at the Peace Arch, Mr. Lawrence prayed for missing and murdered indigenous women and their families as he sought to locate a companion for his journey to help drive the RV. With no luck finding a driver, he cast out on his own, parking the RV to run or bike with the women’s names on his arms and a red handprint—a symbol of the cause—on his face.

Along the way, Mr. Lawrence was joined by Ethan LaDeaux, of the Oglala Sioux Tribe, and Willi Bessette, of the Colville Tribe. As the trio traveled, they met tribal members mourning the loss of missing or murdered women, politicians and law enforcement who expressed support.

Mr. Bessette recalled a poignant moment along the way.

He recalled running up a steep hill in Nebraska. He wore a T-shirt with a red handprint and a handprint painted on his face. He grew tired as he climbed the hill.

Mr. Lawrence encouraged Mr. Bessette use the memory of missing and murdered indigenous women to push himself as he climbed the hill, Mr. Bessette said.

Then, a car full of women stopped beside the runners, he said.

Among the women in the car was the mother of Ashlea Aldrich, a 29-year-old member of the Omaha Tribe whose body had been found on the Omaha Reservation in January, he said.

Ms. Aldrich’s mother had fallen asleep after weeping for hours and upon waking had decided to go for a drive, Mr. Bessette said.

“She just woke up and saw me with the red handprint and said ‘am I dreaming?’” he said.

The mother of the Ms. Aldrich told the story of her daughter, a moment Mr. Bassette described as “heart touching.” They prayed.

Mr. LaDeaux, the third member of the Warrior Runners who travelled the country by foot, bike and RV, recalled dancing and praying in Washington D.C. and pointed to a specific piece of legislation: Savannah’s Act.

Savannah’s Act, a bill that has passed the US House of Representatives and US Senate earlier this year, directs the Department of Justice to revise and develop law enforcement protocols to address missing or murdered Native Americans.

The bill was presented to President Donald J. Trump on Wednesday, September 30 and awaits his signature.

“If it does get passed there will be so many people out there in the world on reservations and nonreservations, tribal members and nontribal members—it will change their lives,” Mr. LaDeaux said. “Justice will be heard.”

When the “Warrior Runners” arrive in Plymouth on Saturday, they will run about three miles from the parking lot of a nearby Ocean State Job Lot to the statue of Massasoit. At the statue, prayer and song will be offered to the memories and families of missing and murdered indigenous women.

Attendees are asked to wear masks and practice COVID-19 safety.

“Mashpee is a matriarchal society culturally, we can relate to that and want to support them and welcome them here as the final leg of their journey,” Mr. Weeden said of the Warrior Runners.

The Warrior Runners have used the hashtags #MMIWBikeRunUSA2020 and #MMIW through their journey.