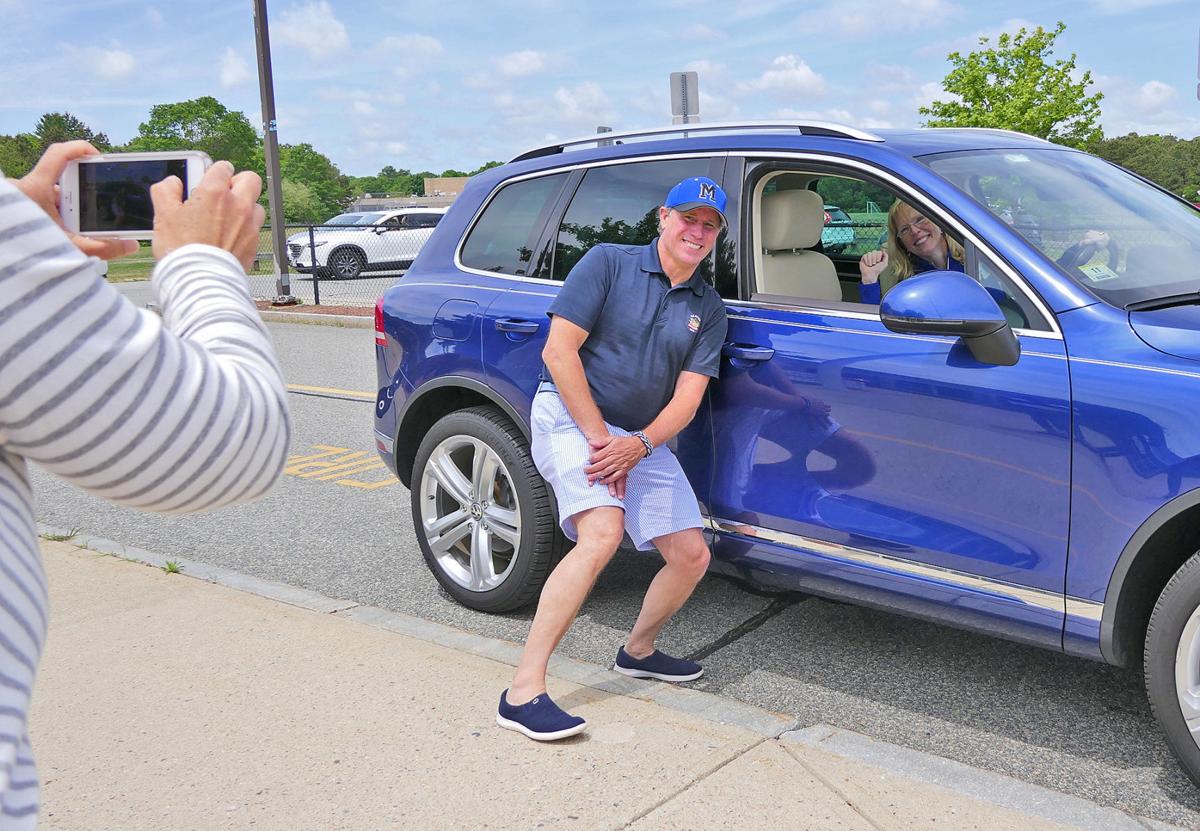 Dozens of cars filled with students and staff roll past the front of the Kenneth C. Coombs School on Monday to wish a happy retirement to Principal Paul LaBelle. Here, Mr. Labelle poses for a photo with school Superintendent Patricia DeBoer. 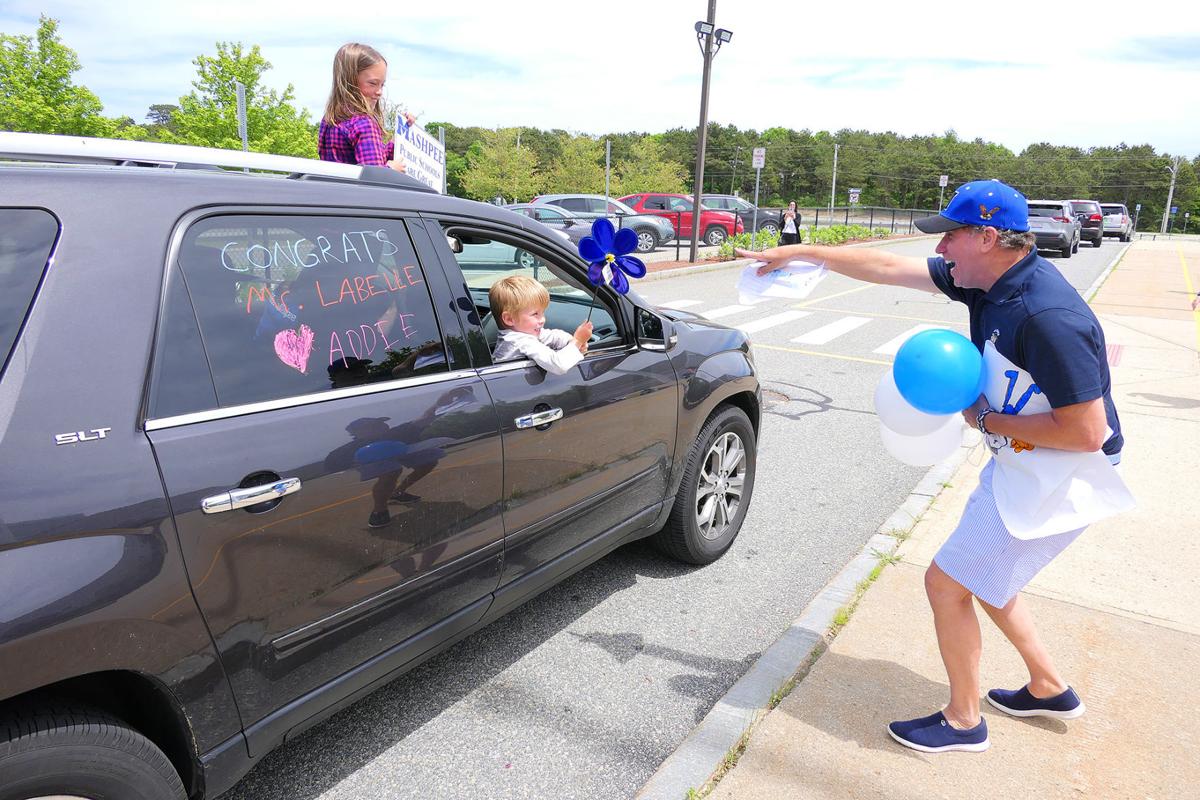 Dozens of cars filled with students and staff roll past the front of the Kenneth C. Coombs School on Monday to wish a happy retirement to Principal Paul LaBelle.

Dozens of cars filled with students and staff roll past the front of the Kenneth C. Coombs School on Monday to wish a happy retirement to Principal Paul LaBelle. Here, Mr. Labelle poses for a photo with school Superintendent Patricia DeBoer.

Dozens of cars filled with students and staff roll past the front of the Kenneth C. Coombs School on Monday to wish a happy retirement to Principal Paul LaBelle.

In one of Paul C. LaBelle’s first years teaching in the Dartmouth Public School District, a teacher came to him with a problem. A 10-year-old student had put herself in a closet and wouldn’t come out.

“I remember her classroom teacher coming in and saying, ‘She’ll listen to you,’” he said.

Mr. LaBelle sat with the young girl, talking with her and listening to her until she was ready to come out.

“I just remember her being huddled up,” Mr. LaBelle said, recalling the early teaching moment.

“It was that moment that really said to me: you have this power to help kids,” he said.

During a recent interview, Mr. LaBelle recalled that moment as the one when he knew that he would make a career in elementary education as he reflected on his time spent both teaching and leading public schools, a career that has spanned more than 20 years and will be coming to an end with his retirement from his role as principal of the Kenneth C. Coombs School in Mashpee.

The moment is a crystallization of how Mr. LaBelle has been able to build powerful relationships with his students over the years, a sentiment echoed by his colleagues.

Patricia M. DeBoer, superintendent of the Mashpee Public Schools, said Mr. LaBelle “absolutely loves his students and will do whatever it takes to help each student to grow.”

“He has made so many great connections within our schools and community and more importantly, he has built amazing relationships with his students and their families,” he said.

Amanda Hough, a teacher at the middle-high school, expressed her gratitude for the work that Mr. LaBelle has done as a leader in the Mashpee schools.

“To me, Paul is the epitome of the best principal ever,” she said. “He puts kids first and I’m so grateful to have known him and I’m grateful that my kids have had him in their lives. They will be better people because of him.”

The strength of Mr. LaBelle’s relationships with those who cross his path was on full display on Monday, June 15, when families, teachers and staff from the Mashpee public schools celebrated Mr. LaBelle’s retirement.

One by one, cars with Mr. LaBelle’s colleagues and former students drove by, dropping off gifts, honking horns and blasting country music.

Debra Goulart, current assistant principal at K.C. Coombs who will be taking over for Mr. LaBelle next year, said he has been a “patient and kind mentor.”

“I am going to miss him so much,” she said, “but I plan on keeping in touch as I attempt to fill his big shoes.”

Mr. LaBelle speaks highly of his colleagues in the Mashpee schools, saying that the community of educators has their eyes on the development of a “whole child,” which is part of a broad trend in education.

He said that one of his proudest accomplishments as the principal of the K.C. Coombs School is how he has strengthened the relationship between the school community and the Wampanoag community.

Mr. LaBelle stressed that elementary school is where children begin forming opinions and prejudices, and he has worked to help facilitate a districtwide effort to incorporate Wampanoag culture and identity into the curriculum and everyday activities at the school.

“It’s a big part of my love for this school,” he said. “We have such diversity here.”

Mr. LaBelle advises young teachers to “teach from the heart,” and to focus on building the relationships with students and families that so many see as his hallmark.

“It’s not about opening up someone’s cranium and putting in information,” he said. “I look at the stories. The kids that come back to you years later. There is someone who still remembers you. You’ve made a difference.”

Mr. LaBelle recalled when he used to teach a current events club with 4th graders, a club he happened to be teaching on the day of the September 11, 2001, terrorist attacks.

A picture of Mr. LaBelle and the group of students he was with that day still hangs in his office as the group found themselves bound together by a common experience of a tragically historic day.

To this day, Mr. LaBelle said, those students, who are now in their 30s, reach out to him on the anniversary of the attacks.

Mr. LaBelle said that the group has become bonded by being together for that moment and, although it is tragedy that holds them together, it has been interesting to see how those people who were once his young students have changed in how they approach and understand that day together.

“To still be in contact with them, years and years later, to see how their lives have been molded, the choices that they have made, and the influence that they tell you that you had on them, it’s just so cool,” he said.

Although Mr. LaBelle is retiring from his career as a professional educator and school leader, he will continue working with children as a volunteer doing equine therapy in Louisville, Kentucky, where he is moving with his wife to be close to their first grandchild.

But, Mashpee will always hold a special place in his heart.

“I can’t imagine retiring from anywhere other than Mashpee,” he said. “It is such a fantastic place.”