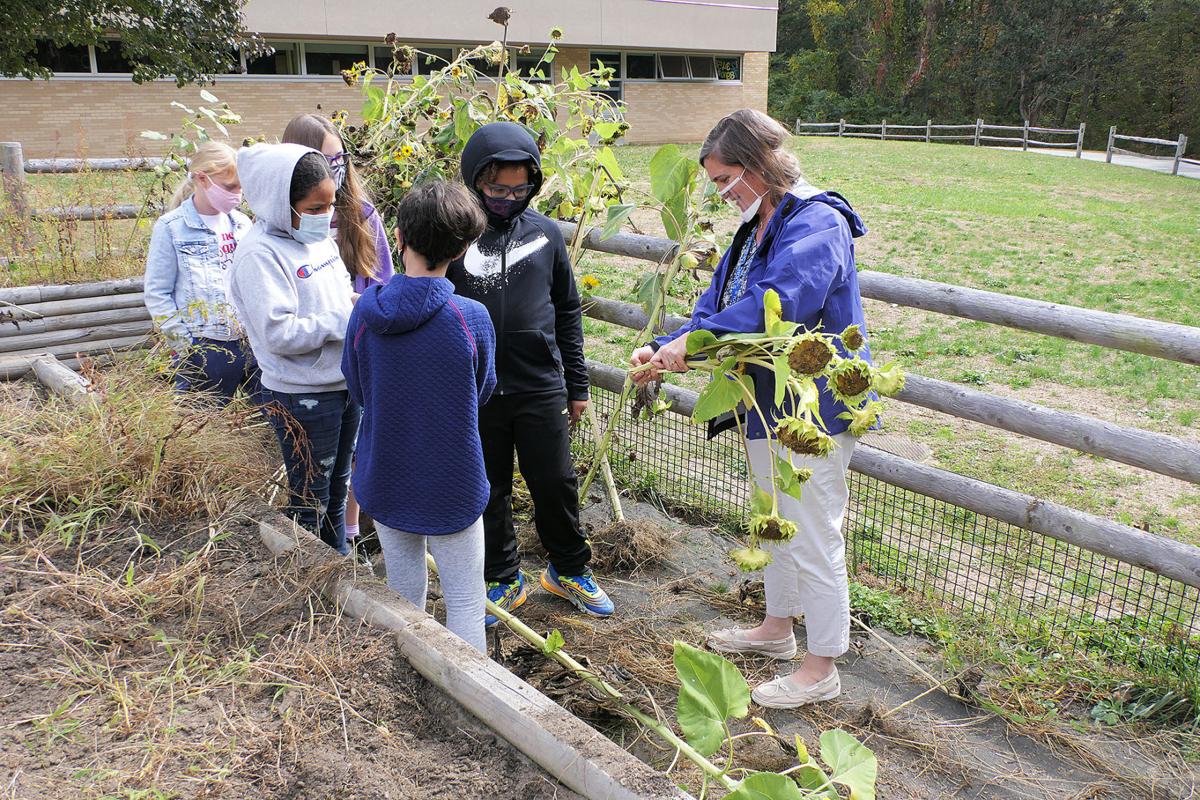 Teacher Mairead Mayen works Monday in the Quashnet School garden with her 5th grade class. Flowers and vegetables were grown in the garden this year. 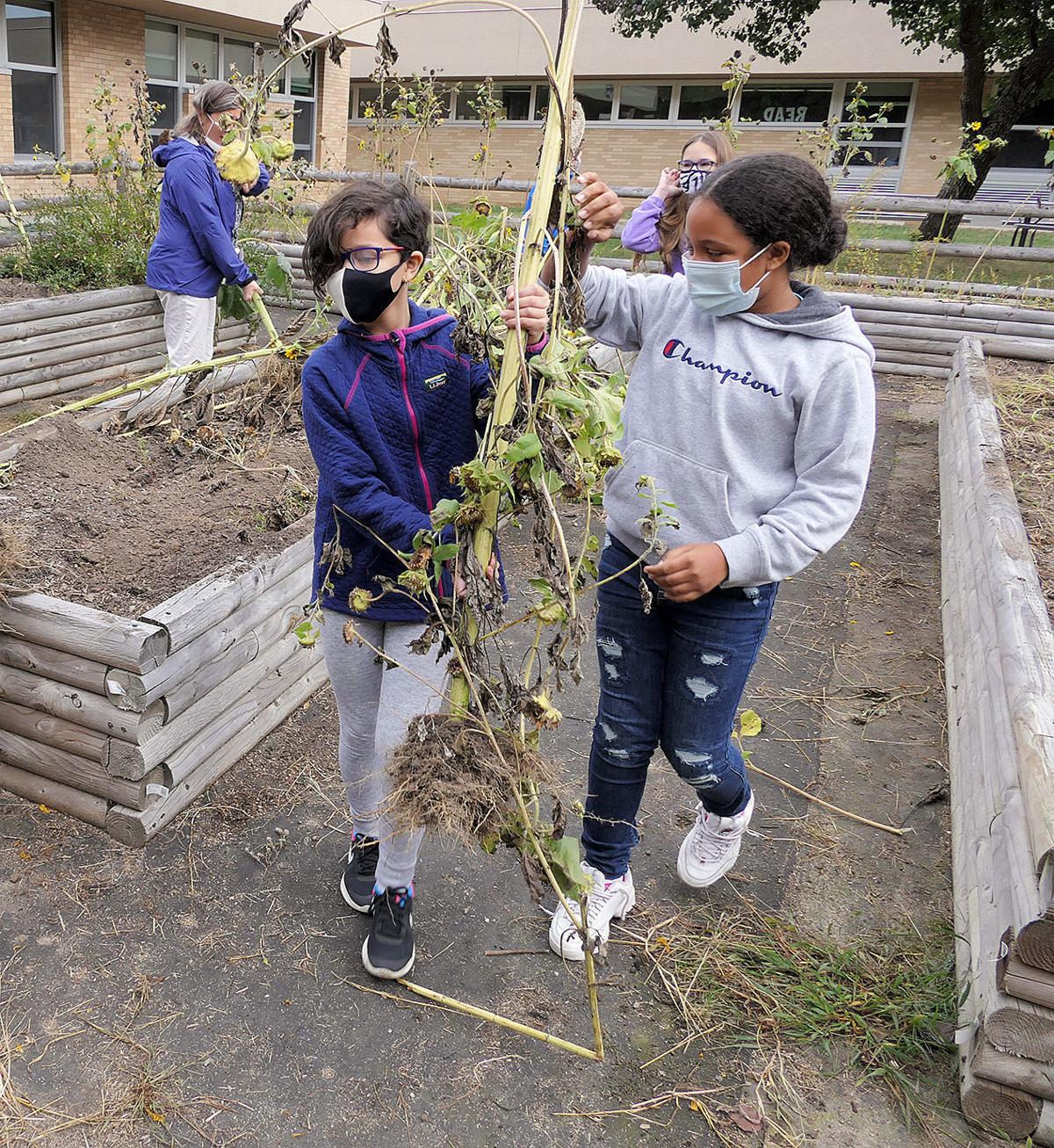 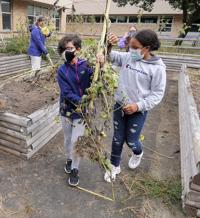 Audrey Ogilvie and Alyvia Fontes carry a large sunflower plant they uprooted from the Quashnet School garden. The wilted flowers are being pulled up to prepare for the next planting.

Teacher Mairead Mayen works Monday in the Quashnet School garden with her 5th grade class. Flowers and vegetables were grown in the garden this year.

Audrey Ogilvie and Alyvia Fontes carry a large sunflower plant they uprooted from the Quashnet School garden. The wilted flowers are being pulled up to prepare for the next planting.

On an early October day, when the sun still has the power to warm one’s skin, Mairead Mayen’s 5th grade students were busy weeding the raised garden beds behind Quashnet School.

Sean is a student in Ms. Mayen’s math and science class.

This fall semester, Ms. Mayen and other science teachers at Quashnet have been taking advantage of the warm weather and the life science curriculum to give the children hands-on experience outside.

“We picked carrots and potatoes and we weeded a lot and talked about roots and stems,” Sean said.

While some students chose to eat the carrots they picked, Sean dug up a potato because he wanted to see what it looked like.

“Oh, I didn’t cook mine—my potato was rotten,” Sean said with a shrug.

“For a lot of kids, all they know is baby carrots in a bag or they’ve never seen a potato come out of the ground,” Ms. Mayen said. “So it’s fun for them to see where it actually comes from—its natural state.”

The time is an opportunity for the students to learn outside of the classroom.

The students had a hard time pulling the sunflowers—planted by Ms. Mayen—out of the ground because of the roots.

“It showed the kids part of the purpose of the roots is to root the plant into the ground,” Ms. Mayen said. “So it’s a little hands-on knowledge for them.”

Sean said he likes this part of class because it’s an opportunity to go outside, besides during recess.

“It’s just a time to get fresh air,” Sean said. “And overall it’s just fun because it’s something that’s not like math.”

Ms. Mayen shook her head and laughed, since she is also Sean’s math teacher.

“A big part of our life science curriculum is for the students to learn about plants and how energy comes from the sun and through plants and then feeds an ecosystem,” Ms. Mayen said. “It’s really a great way to give them some real-life experience.”

“One of the 5th grade standards is to learn about different plant parts and also composting,” Ms. Mayen said.

Last year Ms. Mayen was collecting food scraps from the cafeteria to add to the compost bin in the garden, but since COVID-19 that has come to a halt.

“Last spring we were really excited to put a bunch of stuff in but then everything fell apart,” Ms. Mayen said. “So during the spring when the kids weren’t in school I put in all the sunflowers, potatoes and carrots and made videos so they could see it from home.”

After planting in the spring, Ms. Mayen continued to maintain the garden during the summer.

Ms. Mayen said her proximity to the school allowed her to visit a couple times a week to water the garden, but she hopes more people, possibly families, will get involved next summer to maintain the garden.

The garden was originally created nine years ago by Jamie Whiddon, John Bedard and their two 5th grade homerooms, with funding from a grant.

It was updated to its current state, Ms. Mayen estimated, about a year and a half ago.

The plot is equipped with multiple raised beds and fencing all the way around it.

“I did battle with the rabbits this year,” Ms. Mayen said.

During the remodeling of the garden rabbit fencing was placed on the bottom portion of the fence but the rabbits were jumping over that, Ms. Mayen said.

Ms. Mayen and her daughter installed some chicken wire along the upper part of the fence to keep the jumping bunnies out.

“I still see weeds over there that need some roots and stems pulled out,” Ms. Mayen said to her students.

Ms. Mayen had some seeds with her that she planned to plant, but she admitted that it’s late for fall planting.

“We haven’t had a chance to get this garden going,” she said. “Hopefully this spring we’d like to do a lot more with it.”

“The problem is with our growing season you really can’t fit much in before school gets out, but peas are easy to put in early,” she said. “Potatoes and carrots we will definitely do again. It’s fun to get them to plant things in the spring so that way in the fall the next kids get to do what these kids did—that’s our hope.”

“They’ll definitely remember this even if they won’t remember the other things when I ask them about 5th grade some day,” Ms. Mayen said.

Photographer Mark Chester Will Give Talk On Saturday