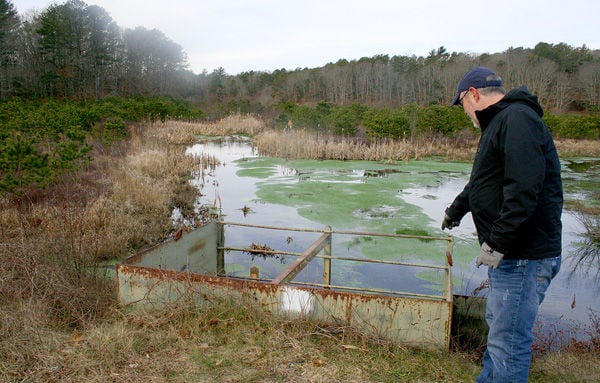 Mashpee Conservation agent Andrew McManus points to a culvert where the Quashnet flows through in the upper regions of the river. Because of a failed berm, water flow has decreased over the years leading to an increase in vegetation, warmer water, and a less optimal habitat for herring and brook trout. Behind the direction of the commission, Mr. McManus hopes to redirect and restore the Quashnet, one of the longest rivers of Mashpee. 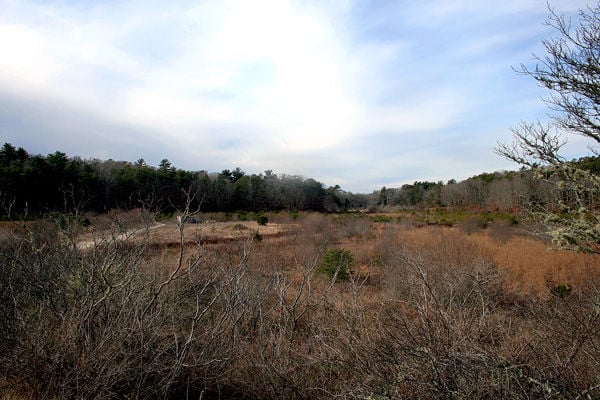 Besides restoring the river, the commission hopes to restore the approximately 18 acres of former cranberry bogs into white cedar and red maple swamp. The restoration back to its natural landscape will encourage a more diverse wildlife refuge. 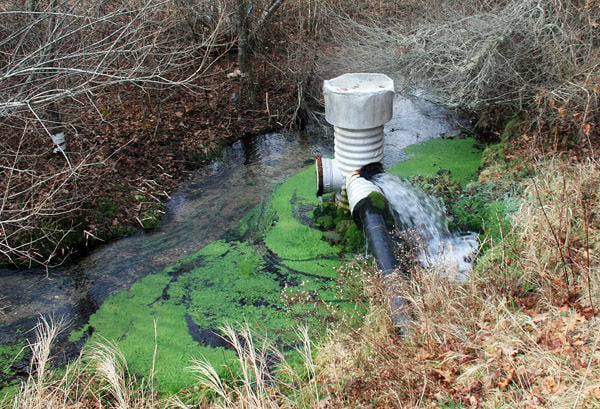 A filtration pump installed by the Navy creates cool, clean water into the Quashnet, giving brook trout its desired conditions. As the contamination efforts in the area nears completion, the pumps will cease and the habitat for brook trout will diminish with it.

The Mashpee Conservation Commission has begun a renewed effort to restore the upper region of the Quashnet River. Around the corner on the left is the river's entrance to John's Pond. This section is full of swamp reeds which threatens an optimal habitat for herring and brook trout.

Mashpee Conservation agent Andrew McManus points to a culvert where the Quashnet flows through in the upper regions of the river. Because of a failed berm, water flow has decreased over the years leading to an increase in vegetation, warmer water, and a less optimal habitat for herring and brook trout. Behind the direction of the commission, Mr. McManus hopes to redirect and restore the Quashnet, one of the longest rivers of Mashpee.

Besides restoring the river, the commission hopes to restore the approximately 18 acres of former cranberry bogs into white cedar and red maple swamp. The restoration back to its natural landscape will encourage a more diverse wildlife refuge.

A filtration pump installed by the Navy creates cool, clean water into the Quashnet, giving brook trout its desired conditions. As the contamination efforts in the area nears completion, the pumps will cease and the habitat for brook trout will diminish with it.

Renewed effort backed by the Mashpee Conservation Commission is underway to restore the upper region of the Quashnet River, which runs over five miles from Johns Pond to Waquoit Bay and, along with the Mashpee River, is one of the largest in town.

“The ball is starting to roll again,” said Andrew R. McManus, conservation agent for Mashpee. He said that the town is in the preliminary stages for a project that has failed to take shape since cranberry bogs were abandoned in the 1990s.

Next week Mr. McManus is scheduled to meet with Tighe & Bond, a New England environmental engineering company that he hopes can lead the resurgence of a restoration effort of the river.

The primary goal is to create an optimal habitat for river herring and brook trout. Mr. McManus hopes to increase the flow of the river and to reroute a section of it to the western edge of cranberry bogs. In its new location, trees at the edge of the bogs would provide shade to cool the water; a freer-flowing river would create an optimal habitat for both herring and brook trout.

Because of a collapsed berm installed by the US Navy in the upper stretch in the 1990s, the river has slowed over time, leading to increased vegetation, invasive species, a mucky substrate and warmer water, threatening the habitats for the trout and herring.

“This is a big project,” Mr. McManus said. “If everything goes smoothly and as I envision it, it could take five years,” although he admitted five years is optimistic.

Also included in the project is restoration of approximately 18 acres of abandoned cranberry bogs to its natural state of white cedar and red maple swamp. The upper Quashnet, east of Johns Pond and north of Quashnet Valley Country Club golf course, runs through the former cranberry bogs.

Mr. McManus also hopes to improve a fish ladder at the entrance of the Quashnet into Johns Pond. He said that every year a front-end loader is needed to clear the run for herring and that the ladder is outdated.

During a cold winter day this week, the bogs looked barren. Spindly and sparse black pine trees dotted the faded red bogs as well as clumps of gray willow trees, an invasive species.

“This area has great potential,” Mr. McManus said on a site visit. A berm on the northern area of the bog could be removed to open up water from a red maple swamp, which would stop the growth of the pine and willows and allow for white cedar and maples to return, Mr. McManus said.

At the river, swamp reeds and green moss settle on the surface. Visible grasses grow on the mucky river bottom and stretch to the surface, impeding the water’s flow. Mr. McManus said that herring can survive in these conditions, but it is not optimal. During the spring run, he said, osprey and other predators have an easy time picking off the herring as they back up in the slow-moving river.

Mr. McManus said that if the area is restored to what it was, public recreation opportunities would increase and wildlife would increase in the area, leading to improved hunting and fishing.

Mr. McManus said there is a chance of receiving grant funds for feasibility studies and the physical work to restore the area because of the numerous stakeholders involved.

The Mashpee Wampanoag Tribe, the Massachusetts Division of Fisheries and Wildlife, the Town of Mashpee, Cape Cod Trout Unlimited, and the Falmouth Rod & Gun Club all have an interest in the area.

“That river has so much potential to be a really great habitat for wild brook trout and to be an absolutely beautiful wildlife area, but we are losing so much of it right now,” Francis H. Smith, a coordinator for Trout Unlimited, said. Trout Unlimited is a nonprofit organization aimed at restoring cold water fisheries in the Northeast. Mr. Smith has been involved in an effort to restore and protect the lower regions of the Quashnet for nearly 40 years. He said that he is excited for the renewed effort to restore the upper regions of the river.

“Everything flows downstream. If the upper part is in great shape, especially that section, the system itself will be a tremendous benefit,” he said.

“What is taking place there is relevant to everything else,” Mr. Smith said. “Everything in the upper region of the bog will affect the rest of the river in a very good way,” he said.

The upper section of the river cuts through cranberry bogs that had been cultivated for over a century. During the Cold War, the military dumped aviation fuel, which entered the groundwater and flowed into this section of the Quashnet. Toxins were discovered in the cranberries and in the mid-1990s, the Navy funded a filtration plant to clean the river. The Mashpee-leased cranberry bogs ceased operation temporarily because of fear that the toxin could get into baby food.

The filtration system, which is still in operation today—although less water is filtered than when it began—pumps cool water back into the river, creating an optimal habitat for brook trout. Mr. McManus recently conducted a count of brook trout near the filtration plant, which sits on the northeast section of the bogs, and said that he was amazed at the number of fish counted.

As the water filtration system nears completion of its service, less water is pumped through the plant and less cold water reenters the river, threatening the existence of the brook trout, Mr. McManus said.

Haley & Aldrich, an engineering company, was hired in 2000 to conduct a study and reported in 2007 that the optimal location for the river was the western edge of the bogs. But the project has been on the back burner since then.

Mr. McManus, after advisement from the Mashpee Conservation Commission, will meet with representatives of Tighe & Bond to determine whether it makes sense to continue working with the firm.

“There are still a lot of unanswered questions,” Mr. McManus said. He said that for the time being, he hopes to find the right company with the right experience and to make sure that all of the parties involved are on the same page. “Now it is sorting out the details,” he said.

“We need people that are interested and for the public to take an interest in this,” Stephen T. Hurley, manager of the Southeast District Fisheries for Massachusetts Division of Fisheries and Wildlife, said. “It really needs a full-time person to grab this and push it forward.”

Mr. Hurley said that it is also up to the Navy and how much money it will allocate for the restoration project.

Museums On The Green To Host Free Virtual Talk Series