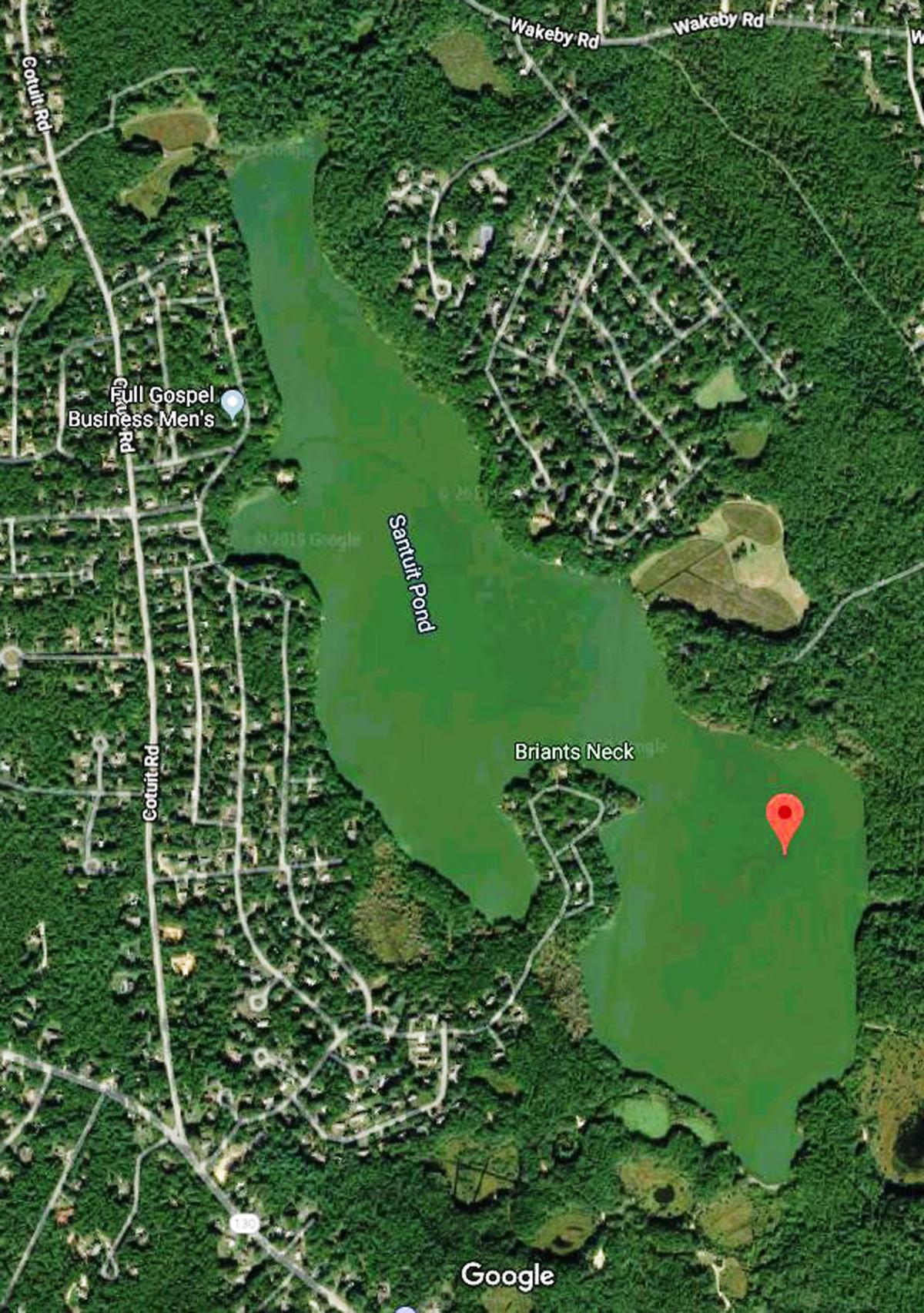 A satellite view of Santuit Pond 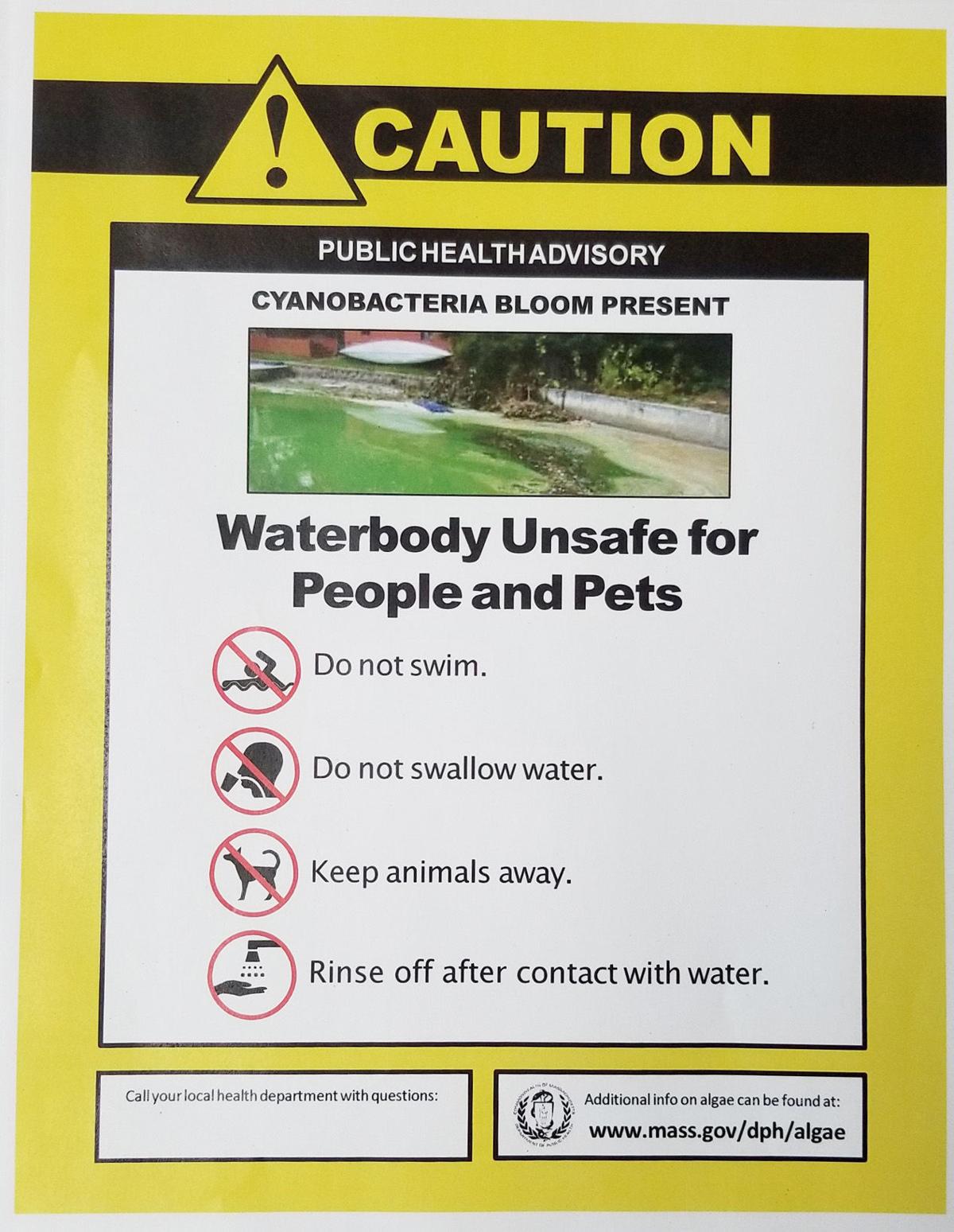 A sign by Santuit Pond warns the public about a potentially toxic bloom. 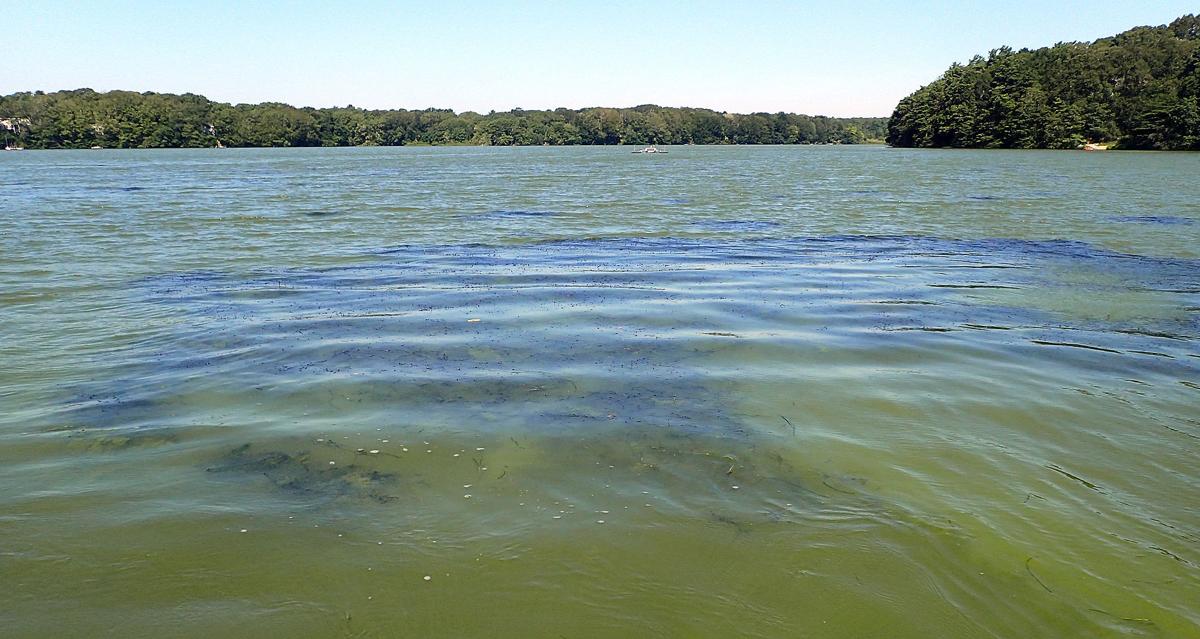 A satellite view of Santuit Pond

A sign by Santuit Pond warns the public about a potentially toxic bloom.

In the summer, the blue-green algae bloom in Santuit Pond has seemingly become commonplace.

For the third year in a row, the water in the pond looks green rather than clear. A mat of greenish algae recently became evident, too.

The Mashpee Health Department has installed signs around public access and swimming areas warning that people should minimize exposure to the water and keep animals from drinking it. Swimming is not recommended.

“This is more than an aesthetics issue,” said Andrew R. Gottlieb, chairman of the board of selectmen, during a meeting Monday, June 17. “We need to do something about it.”

The first order of business, the chairman said, is to notify the public before coming up with a more long-term solution.

The bacteria has a potential to be toxic and creates a toxin similar to one thought to have led to the death of a dog who drank water out of a pond in Brewster in the 1990s.

The bacteria is cyanobacteria, a natural occurring part of a pond’s food system, but given the right conditions, it can lead to an overabundance of the bacteria and to algae blooms.

And given enough concentration of it, it can produce harmful toxins, even release aerosol, and, when ingested, lead to liver damage. It can also degrade the vitality of a pond, leading to fish kills.

How this bacteria turns into a more toxic, dangerous bacteria is still being explored by researchers on the federal level.

The Association to Preserve Cape Cod, a local environmental watchdog, recently launched a project to monitor the bacteria found in freshwater ponds across the Cape. Part of the project is to keep municipalities and the public informed when the bacteria blooms before the threat of exposure.

Mr. Gottlieb is executive director of the association.

Since last week, the association has found levels of cyanobacteria in several ponds of the some 20 they have studied.

High levels of the bacteria were found in ponds including Lovell’s, Hinckley, Wequaquet and Bearse’s ponds in Barnstable.

For Bearse’s Pond, the Town of Barnstable has issued a similar recreational use advisory as Mashpee has for Santuit Pond, and has warned the public to limit exposure to the pond’s water.

Read the stories that matter most.

Scargo Lake in Dennis, Upper and Lower Mill, Cliff and Sheep ponds in Brewster, and Stillwater Pond in Chatham all recorded levels of the bacteria as well, according to recording by the APCC.

Outside of the APCC’s reporting, Shawme Pond in downtown Sandwich recently had a fresh batch of the bacteria as well, with scientists in that town indicating that it likely came from the recent heavy rains washing fertilizers into the pond.

Bryan Horsley, a restoration technician, has led the sampling project with the APCC, which is based on a model approved by the US Environmental Protection Agency.

Mr. Horsley said that cyanobacteria has become more and more common as it has been identified in many Cape ponds recently, and he thinks it is only going to worsen.

“I don’t see it getting better unless we make some big changes,” he said. “It’s pretty sad to see this happening.”

The restoration technician said that the reasons for the bacteria’s emergence are likely the combination of climate change—increased water temperature—and the concentrated development of the Cape around these ponds.

More homes means more nutrients finding their way into water bodies. The conditions are a “perfect storm” for the bacteria to grow and the blooms to spread, he said.

By tracking the ecology of a pond overtime, Mr. Horsley said that they can actually forecast these bloom events and warn the public before it is too late.

Santuit is an example of a success for this model, given that conditions for the pond have been tracked for the last few years. APCC informed the town late last week that the association suspected an algae bloom was coming.

By Monday, the town had tested the pond itself and started to inform the public. Under a microscope, Richard H. York Jr., Mashpee’s director of natural resources, read a level of 76,533 cyanobacteria cells per milliliter. The state threshold for posting advisories is 70,000 cells/ml. Mr. York notified the health department and signs were posted around the pond.

By Wednesday, Mr. Horsley said that scum had begun to form; while the presence of the bacteria is not ideal, the APCC technician said that they were able to warn the public before the risk of exposure.

“I’m excited how well that worked,” he said.

Still, because little is known about cyanobacteria, some local health and natural resources departments outside Mashpee do not necessarily know how to react. Without naming names, Mr. Horsley said that some health departments on the Cape have not issued advisories at the ponds.

The APCC program started in 2017 with only a handful of ponds sampled, but the sampling has expanded every year since.

In the past, it could take a long time for the results of a water-body sample, but APCC is able to let municipalities know with a quick turnaround. The association is looking to track ponds across the Cape, but currently covers mostly the mid-Cape..

In Mashpee, Mr. York is working in tandem with the health department to keep on an eye on the bacteria, but they have yet to identify the harmful toxin. The natural resources department director said that some cyanobacteria can contain toxins including Anabaena and Microcystis, which have been abundant in past blooms, but a bloom of a potentially toxic species might or might not be toxic at a given time. If floating algae that looks like scum is present, it can be more toxic per unit volume because it is concentrated on the surface, Mr. York said.

The Massachusetts Department of Public Health reports that these toxins can produce adverse health effects. Toxins are released from intact cyanobacteria cells when they die in the water body or when they are ingested by animals or humans. Once ingested, the digestive juices destroy their cell wall (lysing or breaking down the cell membrane) and the toxin is released into the gastrointestinal tract.

Mr. York said that residents can still boat on Santuit, even fish, although just catch and release. He did not recommend eating fish from the pond until further study.

Santuit did have a few years without an abundance of cyanobacteria after the town installed a device called a SolarBee. In the years prior, the pond had been shut down for recreation. In the years from 2012 until 2016, Mr. York said that water-clarity levels had doubled and even tripled. But for the past three years, the bacteria has been back in full force, leaving some to question if the SolarBees can handle the loading.

Mr. Gottlieb said that the way forward to protecting ponds on the Cape is to control the source of the contamination, or essentially catching the abundance of nutrients before they get into the ponds.

One way to do that is by building sewers, which Cape municipalities and environmentalists have long been investigating to catch pollution running into region’s embayments. Mr. Gottlieb said that the emphasis has long been on the marine side, with freshwater ponds being just around the corner.