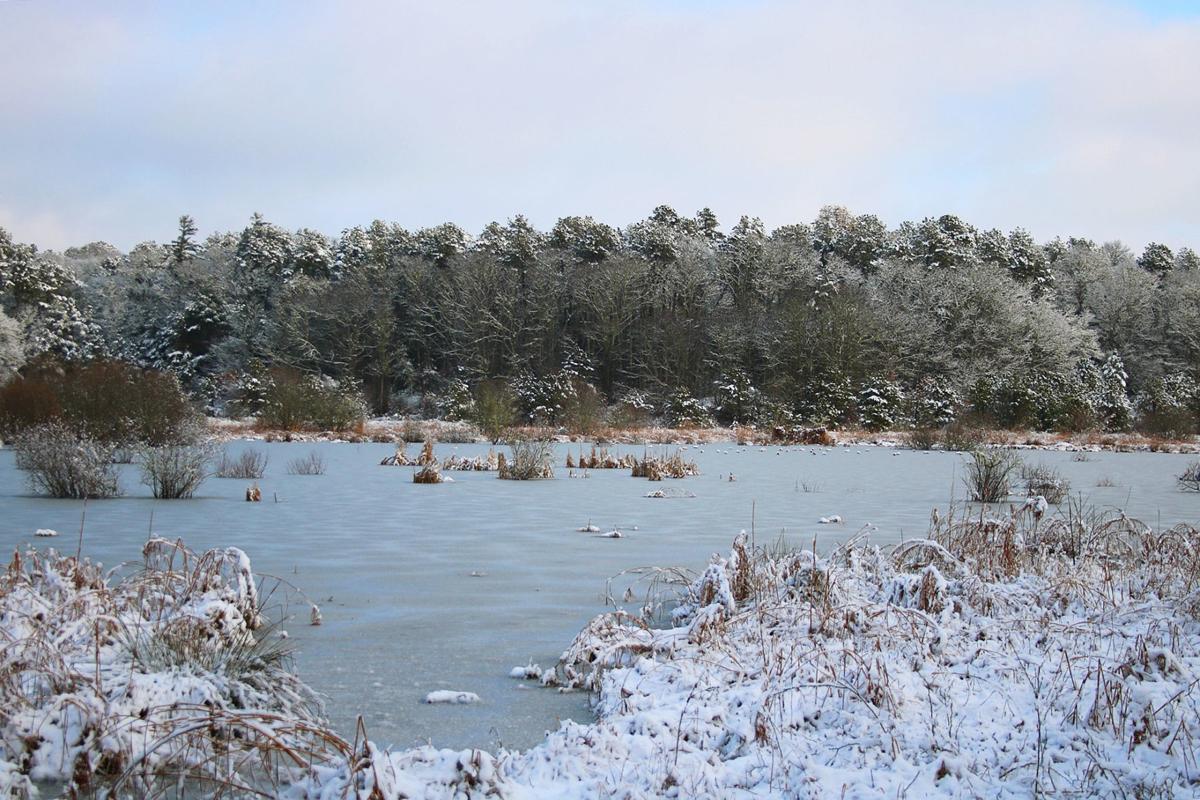 Department heads have suggested flooding this bog, which lies in the Santuit Pond Preserve, to attempt to filter some phosphorus from the pond’s waters. 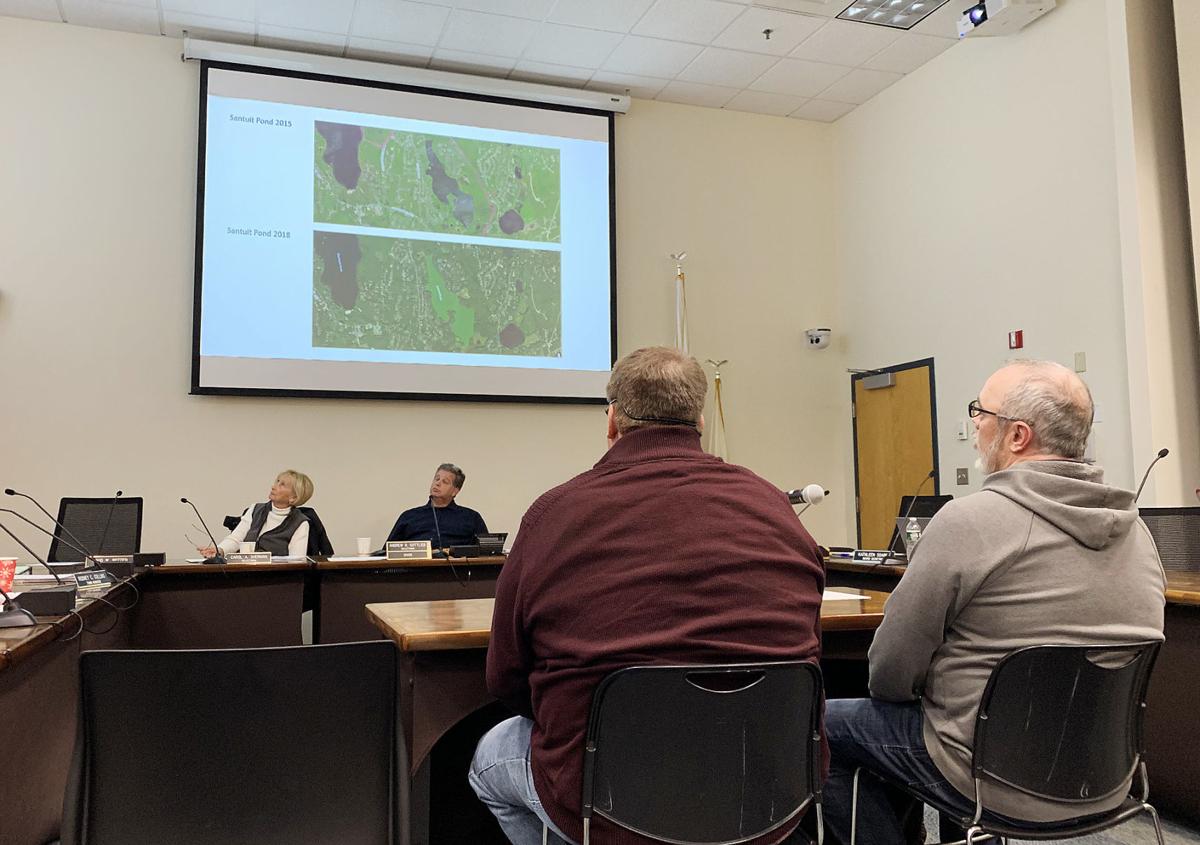 The Mashpee selectmen listen to a presentation proposing short-term efforts to mitigate cyanobacteria on Santuit Pond.

Flooding a town-owned bog adjacent to Santuit Pond could help to remediate the pond’s problems with cyanobacteria, the Mashpee natural resources and conservation departments told selectmen during their meeting in the Waquoit Meeting Room on Monday.

The town should also consider purchasing a cranberry bog adjacent to the pond that is for sale, the department heads said. If purchased, the bog could also be flooded and could be restored to a wetland to capture nutrients that would otherwise flow into the town’s water bodies.

Together, the recommendations to flood the 13-acre bog owned by the town and to purchase the seven-acre bog encompass what is likely to become the town’s latest attempt to mitigate the scourge of toxic algae, known as cyanobacteria, which has bedeviled Santuit Pond for years.

Cyanobacteria are propagated by an excess of phosphorus, which acts like a fertilizer, fueling the growth of the toxic algae in the pond.

During a wide-ranging discussion Monday on reducing cyanobacteria levels at Santuit Pond, the selectmen nixed a proposal to use plankton nets …

In December, the selectmen requested that town staff suggest short-term solutions for preventing recurring blooms since long-term solutions aimed at reducing the sources of phosphorus, like dredging and sewering, remain years away.

“What we’re looking at in the short-term, which we can do right away, is draining some of the pond into bogs that we own,”  Natural Resources Department Director Richard York told selectmen on Monday, January 6.

Mr. York said that, in theory, flooding the bog should reduce the amount of phosphorus recycling in the pond by removing algae from the pond before it can decompose. The decomposing algae release a fresh source of phosphorus, which in turn fuels future blooms, he said.

“What happens is the water will percolate down through the sand [in the bog] and catch the algae,” Mr. York explained. “We would be able to do this repeatedly and possibly remove most of the bloom during the winter.” 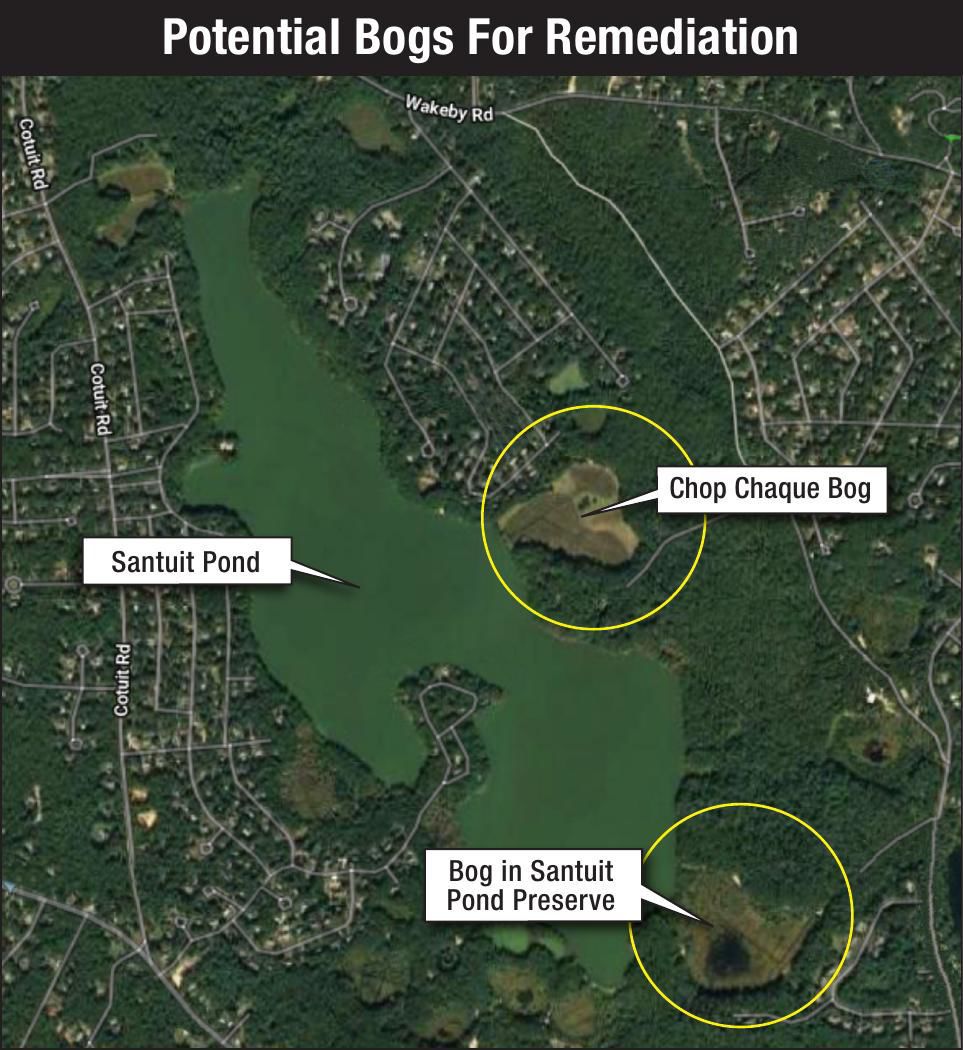 Mashpee Conservation Agent Andrew R. McManus described the proposal as an “experimental approach” which, as far as he is aware, has not been tried by other towns.

“I agree that I think it is worth pursuing to see what sort of difference it makes,” Mr. McManus said.

The town-owned bog, which is contained within the Santuit Pond Preserve, could be flooded by removing boards that prevent the pond water from flowing into a culvert leading to the bog, the conservation agent and director of natural resources said.

The costs associated with the experimental approach would be minimal, they said, since the only required step would be to replace the boards with screens that could be constructed by the department of natural resources. The screens would prevent larger pond life from also emptying into the bog.

Mr. McManus noted that there is no risk to herring since, “for the last three to four weeks there’s been no evidence of any juvenile or adult exodus of herring from any of the herring runs in town, so we’re confident that the herring have moved on.”

The chairman of the board of selectmen, Andrew R. Gottlieb, stated that he is open to the town trying the bog-flooding approach, but that he is “skeptical that it’s going to solve the problem.”

Solar Bees, which circulate oxygen to the bottom of the pond to help keep phosphorus locked in the sediment from escaping into the water, cut the cyanobacteria levels in the pond in half from 2011, when they were installed, until 2017.

But, since 2017 cyanobacteria levels have rebounded with increased rainfall, leading the town to post health advisories at the pond in three consecutive summers and eliciting concern among the town’s residents.

“By flooding the bogs and seeing if that works, I’m not saying it’s going to or it's not,” Mr. McManus said, “but it may give the Solar Bees a better chance of doing what they’re intended to do and what they did do.”

The bog-flooding approach could be implemented in a matter of weeks, the two department heads said.

Mr. Gottlieb also stated that the board could call another meeting of the Community Preservation Committee so that the conservation department could submit articles for purchasing the 7-acre cranberry bog adjacent to Santuit Pond in time for May Town Meeting.

The bog, known as Chop Chaque Bog, is listed on the online real estate database Zillow for $299,000, Mr. McManus said in a phone interview.

“The purchase would have several purposes or aspects that would include conversion from a cranberry bog to wetland for nitrogen removal, open space for recreation, contributing to a wildlife corridor,” Mr. York said.

The undeveloped lots would provide a direct connection from the cranberry bog to an open space lot near Cranberry Lane and the bog, if purchased, could also be flooded, should that remediation method prove effective.