Log in to subscribe for the very first time. Choose your town, delivery method and the length of your subscription. You will be asked for your address, even if you only want a digital subscription (it is a system thing). And don't forget to enter a promo code, if you have one!

Log in to renew your current subscription.  If your subscription has already expired, please call us at 508-299-8379 or email us at circulation@capenews.net for help with your renewal. 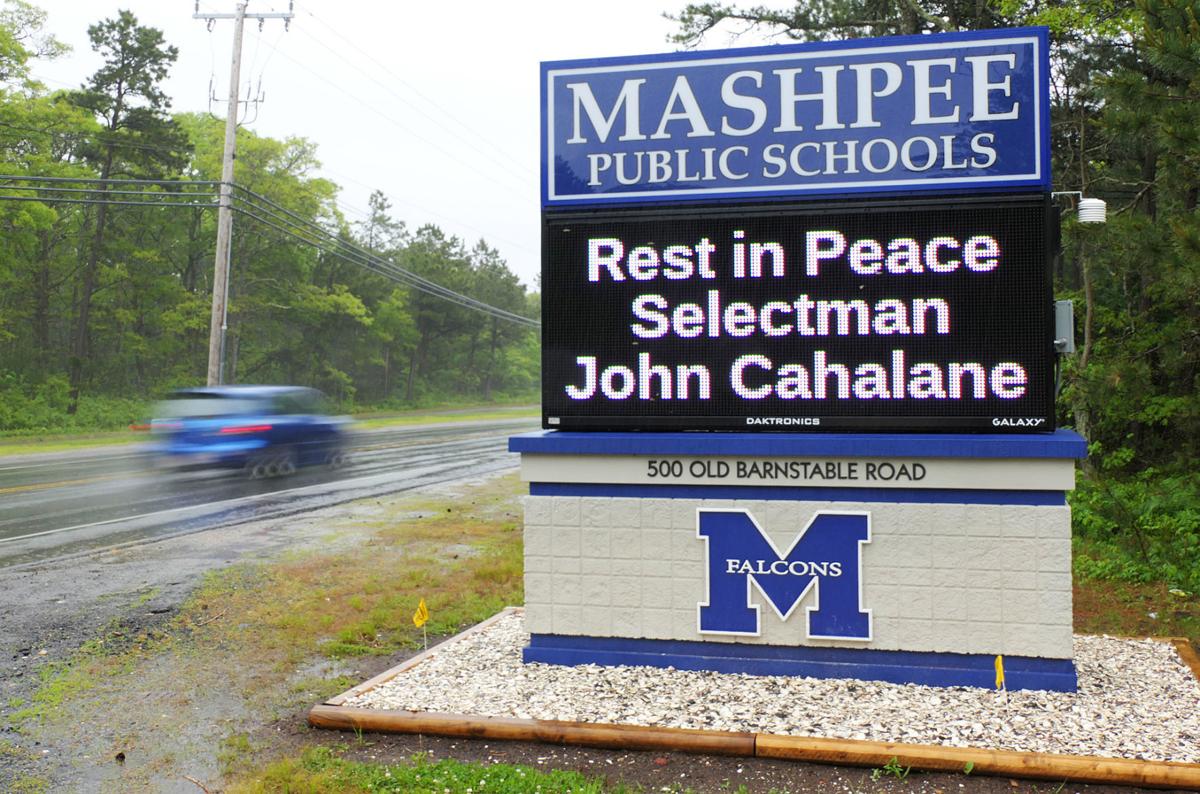 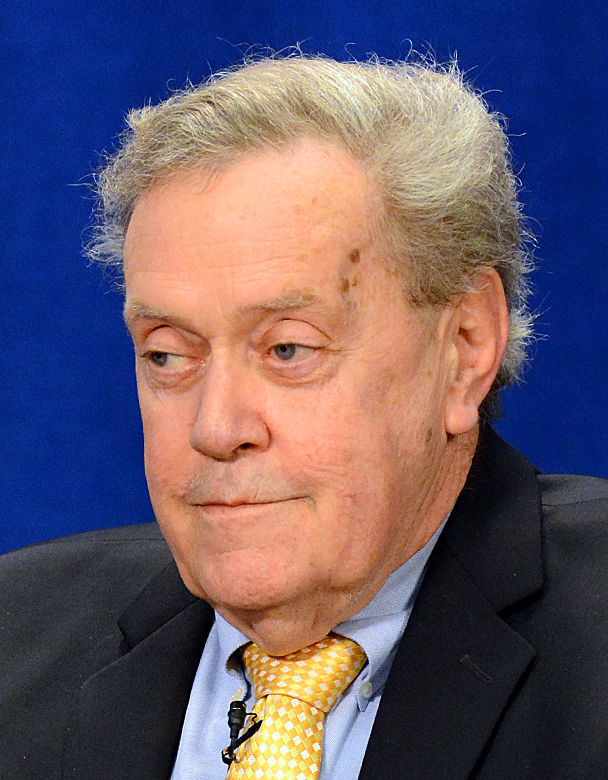 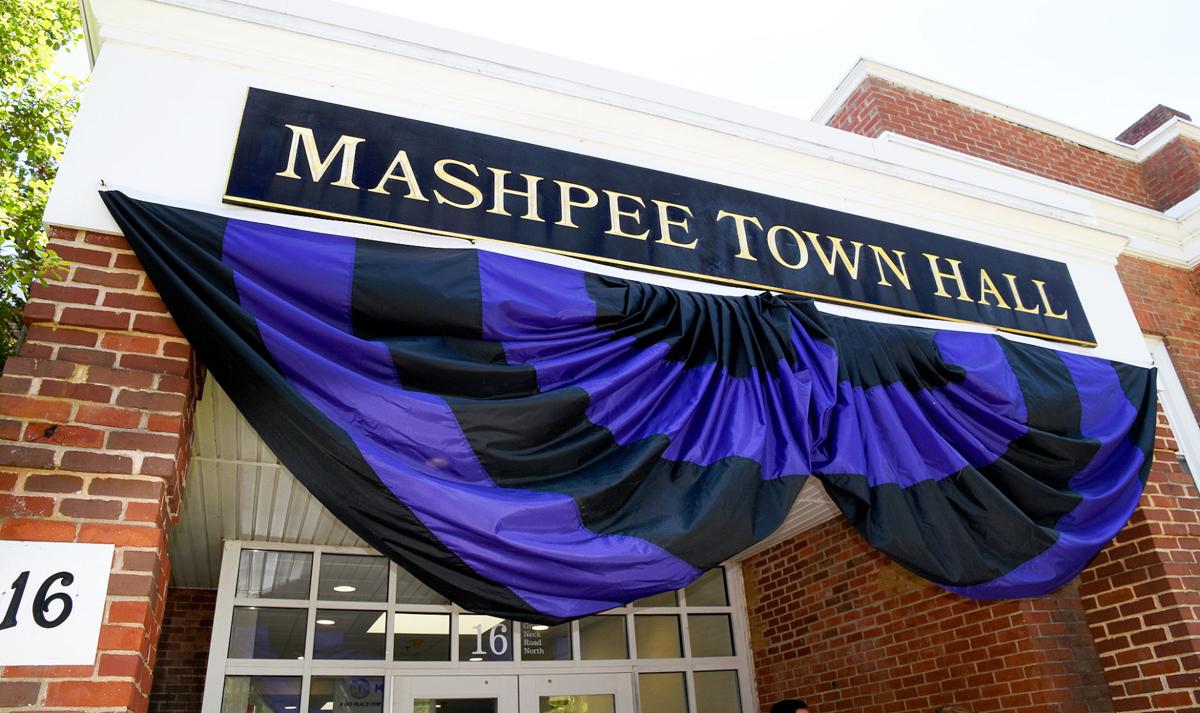 A bunting hangs on Mashpee Town Hall in memory of John Cahalane. 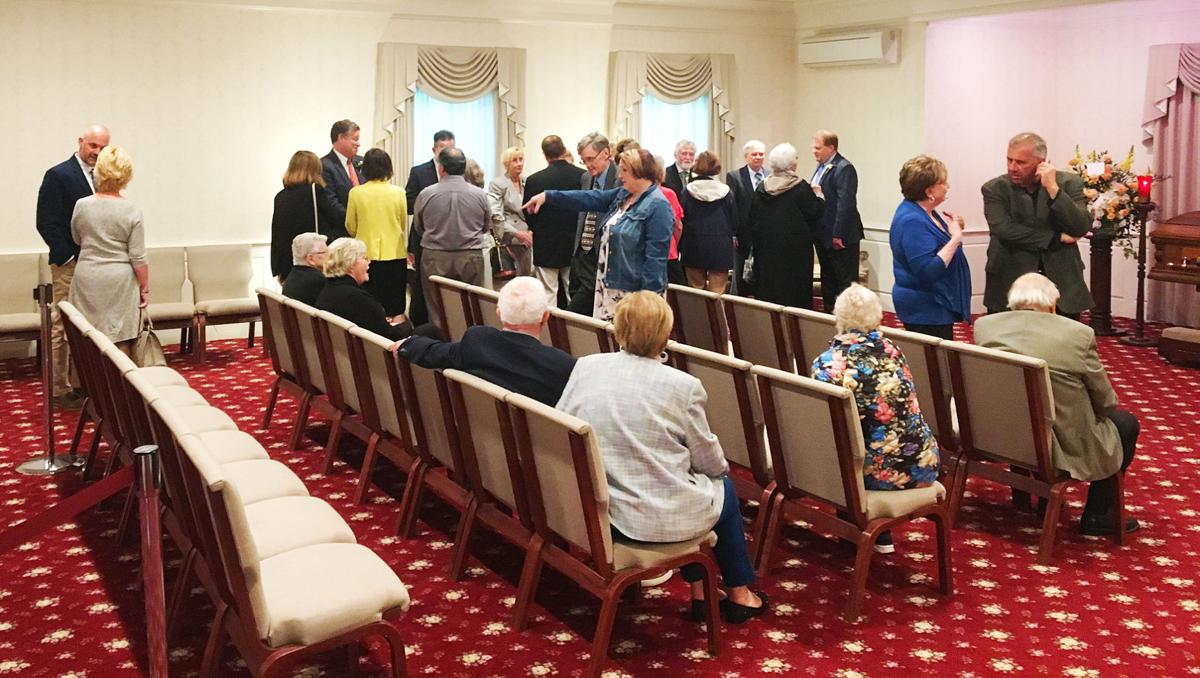 A bunting hangs on Mashpee Town Hall in memory of John Cahalane.

Flags have been lowered to half-staff around town, and a purple and black bunting hangs from the front door of town hall, where the mood has been somber.

Many of his friends and colleagues said the building, where he would visit regularly, became his second home.

Mr. Cahalane died Saturday following jaw surgery earlier last week. He was 72 and serving his 20th year on the board of selectmen, having been elected by Mashpee voters seven times.

A wake was held at Chapman, Cole & Gleason Funeral Home in Mashpee yesterday and a service will be held today at the funeral home at 10 AM, followed by burial at the town cemetery on Great Neck Road South.

Per Mr. Cahalane’s request, a celebration is scheduled to follow at Bobby Byrne’s Pub in Mashpee Commons.

A steady flow of friends, government officials, and other Mashpee residents paid their respects yesterday at the funeral home. There to greet visitors were all four sitting members of the board of selectmen, as well as the town manager, assistant town manager, and Kim Fisher, who had been living with Mr. Cahalane up until his death.

On the funeral memorial cards for visitors was a picture of Mr. Cahalane in his later years with one one of his popular refrains: “Keep it short.” While he liked a shorter meeting, he would say that once a resident during public comment at town meetings went beyond two minutes, they would repeat themselves.

On June 3, selectmen named Mr. Cahalane the honorary dean of the board, the first to receive the distinction.

At the meeting, the board read a proclamation in his honor, noting his “commitment” and “passion for public service and extensive community involvement.”

His death came as a surprise to many. At the board’s meeting last week, selectmen and town officials had thought that he would continue to serve on the board following the surgery.

Those who remembered Mr. Cahalane say he was dedicated, personable and compassionate, but that he was not afraid to speak his mind.

“He did things for people that most people didn’t know that he did,” said friend and fellow selectman Carol A. Sherman.

He brought turkey dinners on Thanksgiving, she said, to people throughout Mashpee that he knew were struggling.

Aside from serving as a selectman for 20 years, Mr. Cahalane also served on the Mashpee Housing Authority board for 14 years. He was a Mashpee sewer commissioner. He was instrumental in starting the Mashpee Human Services Department as well as the department’s most recent substance-use drop-in nights at the Community Health Center of Cape Cod. He served on numerous committees and boards, including the Mashpee Democratic Town Committee, the Mashpee Waste Management Committee, and the Mashpee Environmental Oversight Committee.

Mr. Cahalane grew up in the Boston area and graduated from Boston University with a degree in business administration. He and his wife, Christine (Dulchinos) Cahalane, moved from the Waltham-Watertown area to East Falmouth in 1972 and then to Mashpee in 1978. They lived on Summersea Road in New Seabury.

The couple would open and operate The Farm nightclub on Route 151, in the same area is what is now the vacant lot next door to Andy’s Market.

The Farm was a popular spot in town that routinely hosted live bands. It had a distinction as an afterspot from the Falmouth nightclub scene. Mashpee, at that time, allowed bars to stay open until 2 AM, while in Falmouth bars had to close at 1 AM. Several friends of Mr. Cahalane’s said that they would make the late night trip to the Farm.

The Farm seemed a bit of a victim of its own success, at least at one point. When Mr. Cahalane helped his chef, Charles Francis, open a new restaurant in Falmouth, the local board of selectmen questioned a few incidents that made the Mashpee police reports.

In one report, police arrived at the Farm at 3:30 AM and found three women at the bar with drinks and Mr. Cahalane with a cocktail. The Falmouth selectmen, after an outpouring of support at the meeting from friends and employees of the Farm, decided to grant the license for the new restaurant.

The Mashpee couple ran the Farm from 1972 until 1980, before Mr. Cahalane took a job at Diversified Resorts Inc, the original owners of Sea Mist Time Shares. Mr. Cahalane would eventually become the president of the company, which owned 18 resorts along the East Coast.

In the mid-1980s, Ms. Cahalane started a toy store, Lovers For Everyone. The business began as a delivery service for stuffed animals before the Cahalanes opened a store in Centerville. But before long, the store moved to Mashpee Commons, where it became a staple.

When Mr. Cahalane entered semi-retirement, he jumped further into town government and won a seat in 1995 on the Mashpee Sewer Commission. He had already served 14 years on the Mashpee Housing Authority, where he oversaw the creation of the town’s first two public housing complexes: Homeyer Village and Breezy Acres.

His service for housing issues in Mashpee was not lost on officials still with the authority.

“John was always a strong advocate for creating affordable housing in the town and I feel honored to have called him a friend,” said Leila Botsford, the executive director of the authority.

Mr. Cahalane served two terms on the sewer commission before he was elected to his first term as a selectman in 1999.

He campaigned on protecting the “ecological integrity of our wetlands and our future water supplies,” as he was quoted in an Enterprise article. He also pledged to maintain the town’s rural character and to bring economic development.

Ultimately, he said he won by listening.

“It’s amazing how much you find out just talking to people,” he was quoted after winning his first seat in 1999. “There is a silent majority out there that doesn’t come to town hall, but do have a lot of views on what they want from the town.” Mr. Cahalane beat out Elizabeth A. Nichols in the race.

In a testament to Mr. Cahalane’s character, he told the Enterprise when he was sworn in for his first term: “It’s a shame we couldn’t have all in.”

Listening is a quality that many of Mr. Cahalane’s peers say they respect about him. George (Chuckie) Green, a tribal member who sat with Mr. Cahalane for nine years on the board, said the selectman would listen but was never afraid to give his own opinion right back.

“You knew that he was true,” Mr. Green said. “He was very pleasurable to be around.”

In the early part of Mr. Cahalane’s tenure, the Mashpee Wampanoag Tribe was in the midst of trying to gain its recognition from the federal government and its sovereignty. Some of the selectmen on the board at the time took an antagonistic approach toward the tribe, but Mr. Green said that Mr. Cahalane always had a vision of one Mashpee, whether Wampanoag or not.

He said that Mr. Cahalane’s stance has helped foster the respect shown to tribal rituals and culture seen throughout Mashpee today. Mr. Green noted that the Mashpee High School graduation last weekend featured drums from the tribe as well as a prayer in the native language.

“This is what John fostered,” Mr. Green said.

Mr. Cahalane, he said, was able to listen to and get to know tribal members.

“He was accepted as old Mashpee,” Mr. Green said.

Mr. Cahalane will also have a lasting legacy on the Human Services Department in Mashpee, because he was behind its initial formation.

“He left a legacy of deep devotion to the residents of Mashpee that will not be forgotten,” said Gail Wilson, director of the department.

Aside from initiating the department, Ms. Wilson said that Mr. Cahalane was supportive from day one in pulling together the Substance Use Task Force as well as the Drop-In Night at the Community Health Center of Cape Cod. Ms. Wilson said that the longtime selectman was able to get things done when they needed to get done.

When Ms. Cahalane died in December of 2013, friends and fellow government officials said that town hall became a kind of home for Mr. Cahalane. He would visit every day, if not multiple times a day, said Ms. Sherman, his fellow selectman. And his deep knowledge and sharp memory of the town’s history made him a person many would go to when in need of advice.

“He was a book of knowledge,” Ms. Sherman said, who served beside Mr. Cahalane for three terms.

Town Manager Rodney C. Collins echoed the selectmen’s remarks. He said that Mr. Cahalane was like the red and green markers along a channel. “He got you to safe harbor,” the town manager said. Whether for new employees at town hall, or new elected officials, Mr. Cahalane was there.

An editorial in the Mashpee Enterprise in the 2005 election noted Mr. Cahalane’s commitment. “[He is] an outstanding public servant who devotes an incalculable amount of time trying to find solutions to the challenges facing individual constituents, neighborhoods, and the community,” it stated. The editorial went on to say that he was a good listener, honest, and did not sugarcoat things.

But aside from town politics and government, many were drawn to Mr. Cahalane’s friendly personality.