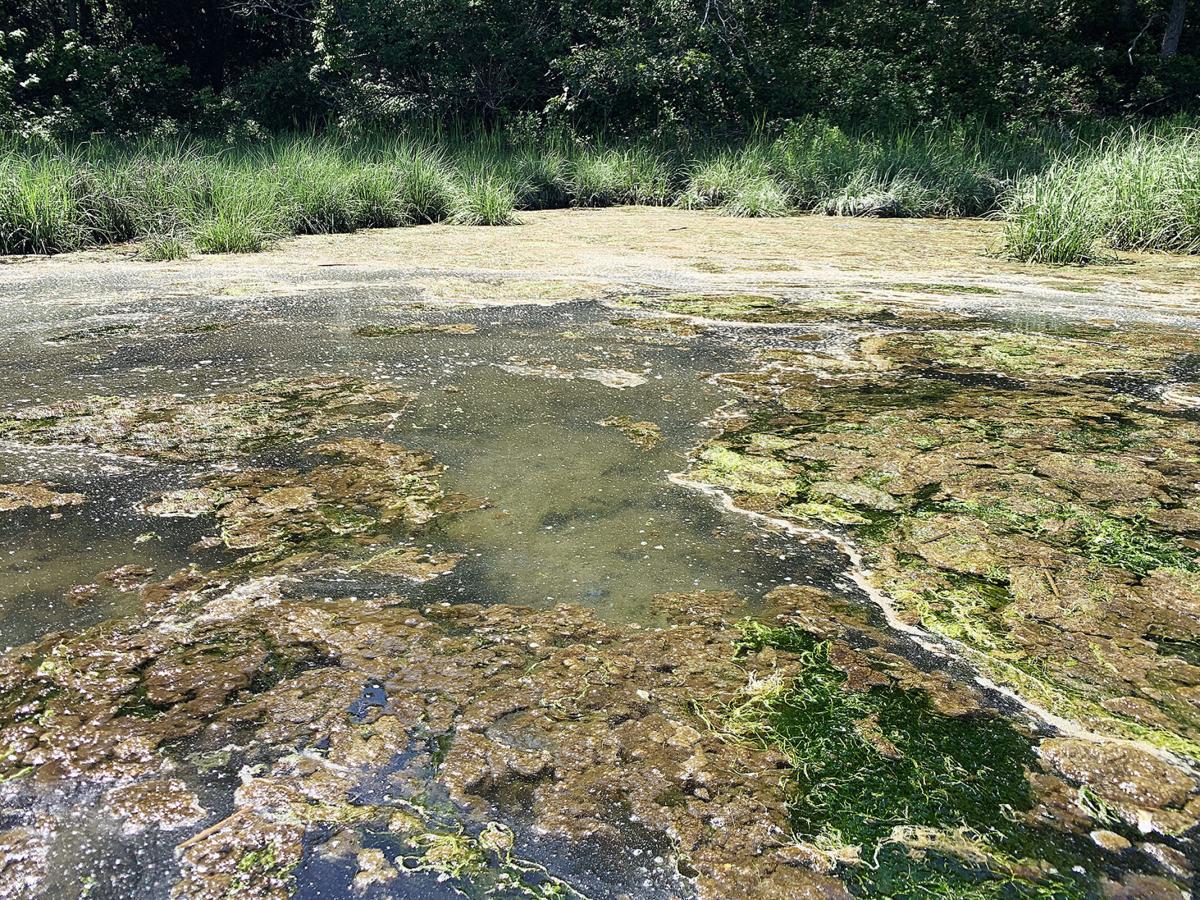 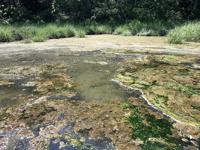 Annual blooms of algae in the Mashpee River, an estuary that flows into Popponesset Bay, are the result of nitrogen pollution from septic systems. 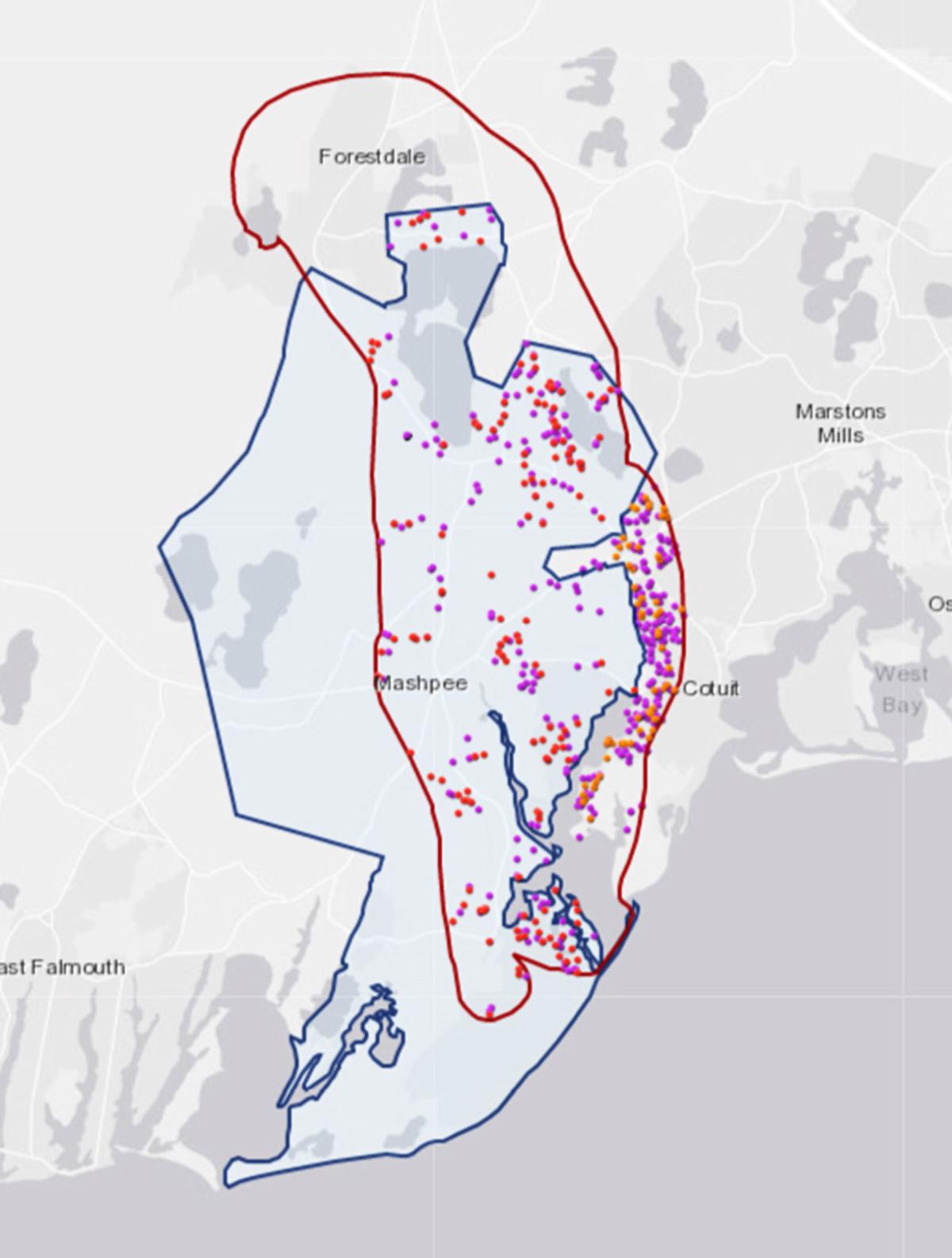 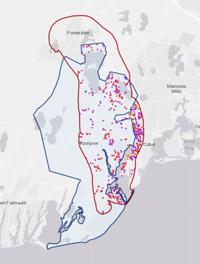 Each dot on this map from the Conservation Law Foundation’s “Cape Cod’s Polluted Bays” report represents a polluting septic system that passed inspection or was permitted in the past five to 10 years.

Annual blooms of algae in the Mashpee River, an estuary that flows into Popponesset Bay, are the result of nitrogen pollution from septic systems.

Each dot on this map from the Conservation Law Foundation’s “Cape Cod’s Polluted Bays” report represents a polluting septic system that passed inspection or was permitted in the past five to 10 years.

For more than a decade, nitrogen pollution has degraded the water quality in Popponesset Bay while the Town of Mashpee has continued to permit hundreds of septic systems that are the known source of the pollution.

In a report published earlier this month titled “Cape Cod’s Polluted Bays: A Decade of Missed Opportunities,” the Conservation Law Foundation counts 648 polluting systems within the Popponesset Bay watershed that have passed inspection or received a permit in the past five to 10 years.

Those 648 septic systems fall within the Town of Mashpee and the Town of Barnstable. The CLF in September announced plans to sue both towns and the Massachusetts Department of Environmental Protection to halt septic system installations and inspections.

“At some point we have to draw a line in the sand and basically say we’re not going to continue to do the thing that causes the problem,” Christopher Kilian, the vice-president of strategic litigation at CLF, said.

The environmental group contends in the proposed lawsuit that the two towns and MassDEP violate Title V of the Massachusetts Environmental Code every time a septic system that discharges nitrogen-laden effluent is permitted or passes inspection.

The data in the recent CLF report draw from public records that offer only a “mere snapshot” of the total number of septic systems that have been permitted or passed inspection in Mashpee over the past decade, Mr. Kilian said.

The rest of the septic systems in the 648 total cited by the CLF have been permitted or greenlighted in the section of the watershed shared by Barnstable, which has thus far provided more years of data to the CLF than Mashpee, Mr. Kilian said.

The Town of Mashpee has long known that the nitrogen-laden effluent from septic systems winds up in the town’s bays where it fuels the excess growth of algae. The excess algae overwhelm the aquatic ecosystem by blocking out light needed by native plants and consuming oxygen from the water column as the algae decay.

“We look at 2009 as a really crucial watershed moment,” Mr. Kilian said, pointing to the year when Cape Cod towns and the MassDEP signed off on total maximum daily loads, or TMDLs, which are the maximum allowable nitrogen inputs specific to each watershed.

The TMDL for Popponesset Bay was completed even earlier, in 2006.

Today, Popponesset Bay is the most nitrogen-polluted bay in southeastern Massachusetts.

Nitrogen pollution has obliterated eelgrass growth in Popponesset Bay, leading to the complete collapse of the scallop population and reducing habitat for other species of shellfish. A slime of decaying algae coats swathes of the bottom of the bay and its estuaries, and in the early summer masses of macroalgae move with the tide.

“If we had been serious about cleaning these bays up over that 10-year period, hopefully we would have avoided a lot of pollution and been on the road to recovery,” Mr. Kilian said.

Instead, “these systems are inspected, are permitted every year, and year after year that adds up to thousands of opportunities to implement systems and programs that wouldn’t pollute,” he said.

Mashpee in the past decade has developed a Comprehensive Watershed Nitrogen Management Plan, a final draft of which was completed in 2015. Town officials contend that efforts to correct the pollution have gained significant traction in recent years.

At Town Meeting in June, residents voted to approve a debt exclusion for the design of a wastewater treatment plant and sewer system to address water pollution in the Popponesset Bay watershed. Residents at Town Meeting this spring are expected to vote on an estimated $51 million package to move that project into the construction phase.

The Mashpee Board of Selectmen discussed the proposed lawsuit in executive session on Monday, December 21.

“I’m disappointed. I think we’ve done the right things over the past few years specifically,” John J. Cotton, the chairman of the board of selectmen, said on Tuesday. “To punish us when we’re finally moving forward, I don’t think that’s fair.”

Mr. Cotton said the lawsuit proposed by the CLF would have made more sense to him a few years ago when there was less momentum behind addressing the pollution.

However, the town’s current nitrogen management plan “doesn’t account for 100 percent of the needed [nitrogen] load reductions,” he said.

Mashpee’s commitment to correcting nutrient pollution needs to be accelerated, and more specifics need to be laid out, Mr. Kilian said.

“I’m hopeful that we can have productive talks that could avoid litigation,” he said. “But we can’t just ignore the facts and say, ‘Sure, put another system in just like the old system,’ knowing full well it’s going to pollute.”

Just write a letter. That should solve the issue. What a joke these elected officials are

thank you to the conservation dept for green lighting these projects all these years must be something in it!