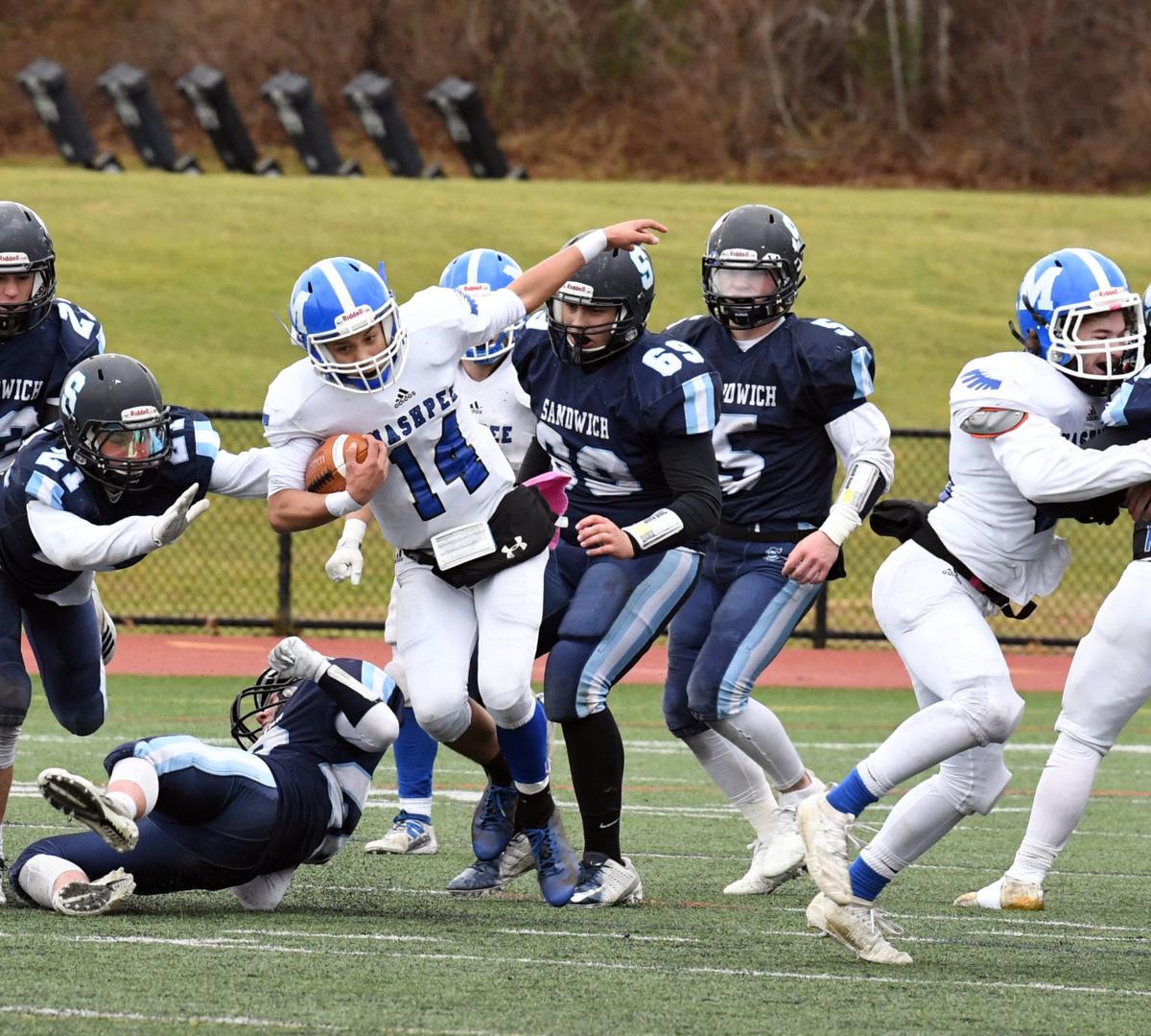 Mashpee High School quarterback Ryan Hendricks weaves past a few tackles for a big gain for the Falcons in Sandwich November 28. The junior helped lead the Falcons to a decisive 24-7 win against the Blue Knights in the annual showdown. 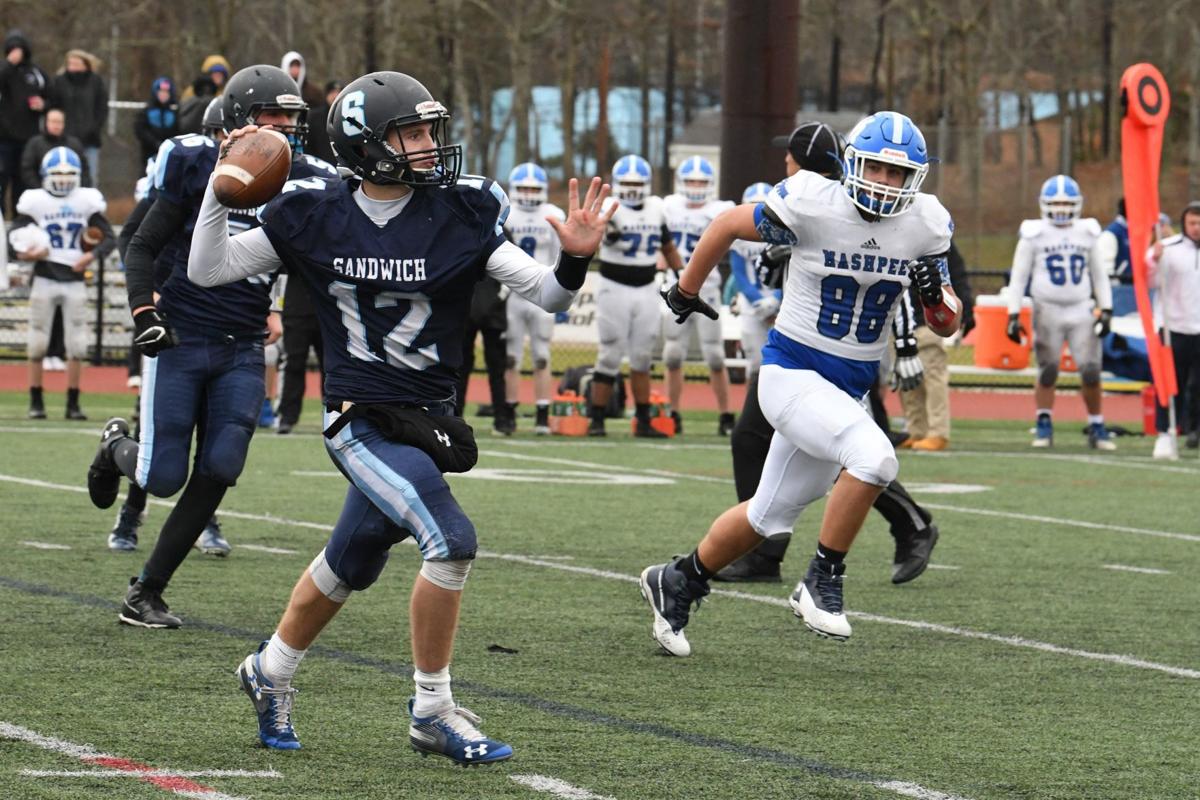 Sandwich freshman quarterback Tim Bengtson rolls out of the pocket to find an open receiver during the Blue Knights’ Thanksgiving Day game against Mashpee on Thursday, November 28. 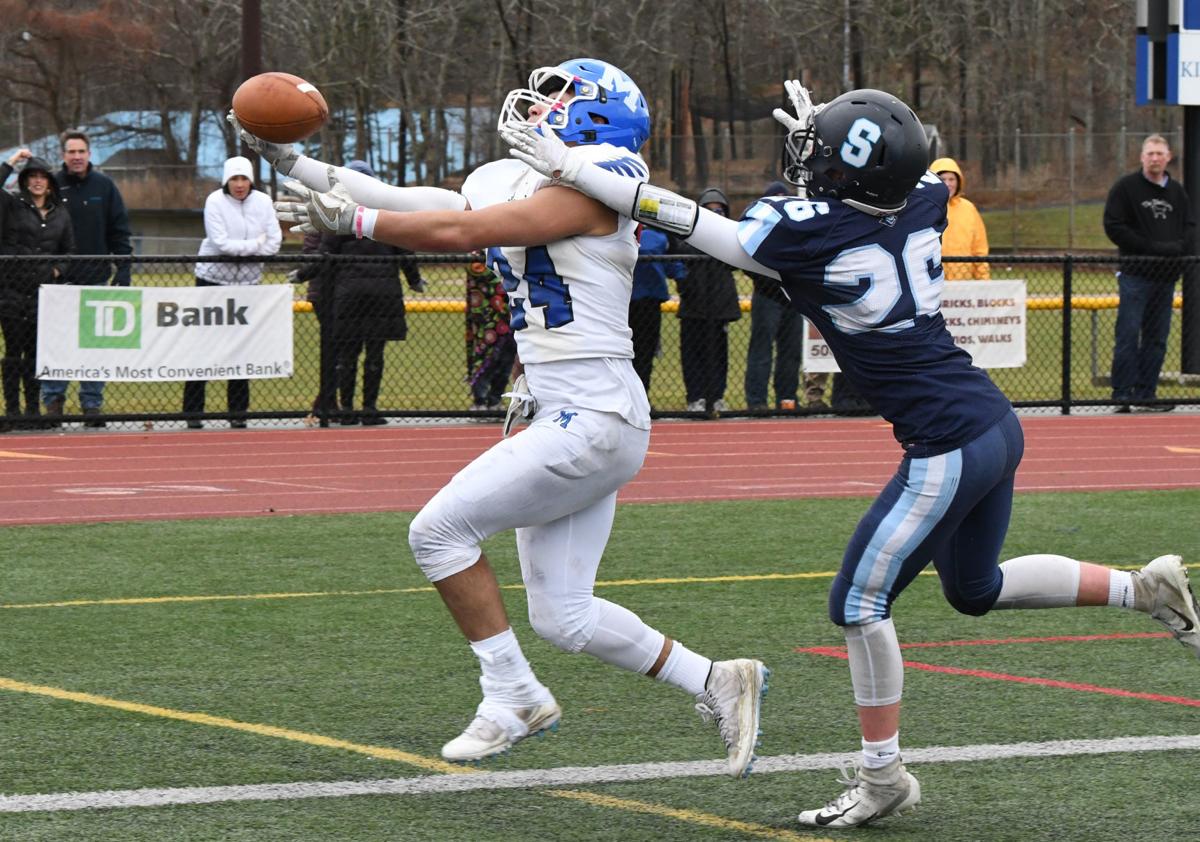 Mashpee senior Kendall Rose reaches out to make a play on the ball on a throw from Ryan Hendricks in the Falcons’ win against Sandwich November 28.

The traditional Thanksgiving morning Cranberry Friendship Bowl football match-up between the Sandwich Blue Knights and the visiting Falcons of Mashpee High School was a physical slugfest as both sides pounded their way up and down Sandwich High School’s Captain Gerald F. DeConto Veterans Memorial Stadium turf surface. The morning was hampered by a 20 miles-per -hour gusting wind, rain and cold 40-degree temperatures.

Sandwich struck first in the opening quarter on a five-play drive from midfield. Bengtson, who finished the day 5-for-17 for 73 yards through the air, hooked up with Patrick Whearty on the left sideline and then found Aiden Spurr over the top in the end zone with 4:13 to play in the first quarter. Lukas Anderson tacked on the extra point for the early 7-0 SHS lead.

The Falcons wasted no time in answering as they put together a five-play, 35-yard drive set up by a 55-yard, momentum-changing kickoff return by Kendall Rose and topped off by a one-yard touchdown run up the middle by Hendricks. Santos powered into the end zone for the two-point conversion behind the blocking of Tyreese Charlton to put Mashpee up 8-7.

Getting the ball back in the second quarter, the Falcons took 6:56 off the clock as they put together a 10-play drive capped by a two-yard touchdown run up the middle by Hendricks. Hendricks then found a wide-open Matthew Bowen in the left corner of the end zone for the two-point conversion and a 16-7 MHS lead. The Falcons had a third scoring opportunity before the break with Hendricks throwing incomplete into the wind four times in the final 12 seconds, but settled for a nine-point lead at the half.

After a scoreless third quarter the Falcons were moving the ball in the fourth, but fumbled on the Sandwich five-yard line. The Knights, stopped by a solid MHS defensive effort were then forced to punt out of their own end zone, giving MHS the ball back on the Sandwich 20-yard line. Three plays later Santos powered his way into the end zone and Hendricks added the two-point conversion on a quarterback keeper for a 24-7 Mashpee advantage.

The weather took its toll, as not only was the wind a controlling factor, but the rain and the wind made the ball hard to control.

“The conditions were bad,” Mashpee head coach Matt Triveri said after the game. “This is the second year in a row the weather has played a huge role. We were going to keep the ball on the ground and take what they were giving us.”

The Mashpee QB, Hendricks, gave the Knights some different looks, carrying the ball himself on several occasions.

“This is where he started,” Triveri said of his quarterback. “He jumped in last year, but he’s a lot different guy now.” Hendricks took over in last year’s Cranberry Friendship Bowl when then MHS starting QB Ian Miller left the game with an injury. “He’s a run threat and can throw when conditions are better. He has done an outstanding job.”

“As a team we’re growing,” Sandwich head coach Matt MacLean said. “The record doesn’t show it, but we had some fun this year. Mashpee is a tough football team, they’re good. I think we played a good first half. Where we’re getting beat, we’re beating ourselves with mistakes. Sometimes it can kill the momentum.”

Tim Ladner finished with nine tackles for the Knights, while Peter Brady had five tackles and two fumble recoveries. “Peter and Tim had good games and Timmy (Bengtson), for a freshman is way ahead of the game as far as maturity goes. There is a lot of stuff we can work on. Obviously we have to catch the ball. Some (passes) were there, some weren’t there, but we’ve got to be catching the ball when it’s in the air.”