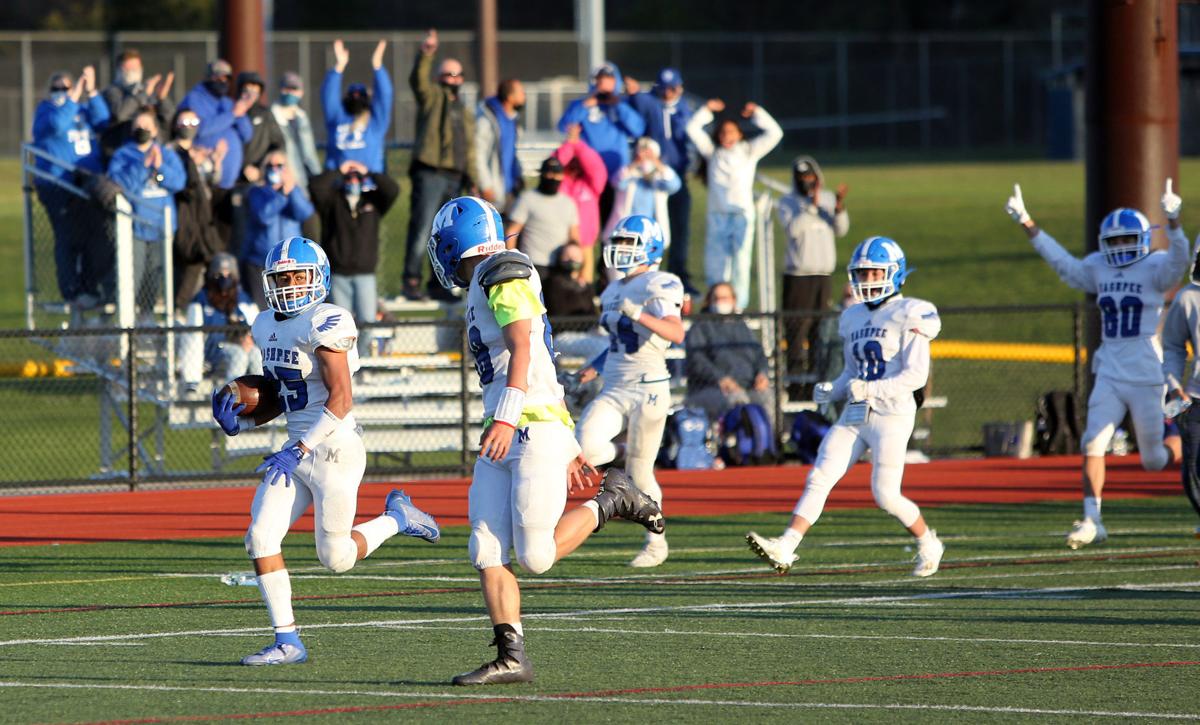 Caesar Hendricks’ fourth quarter interception gave everyone rooting for Mashpee a chance to celebrate. Hendricks had two picks and also ran for a touchdown as the Falcons won easily over Sandwich, 28-0. 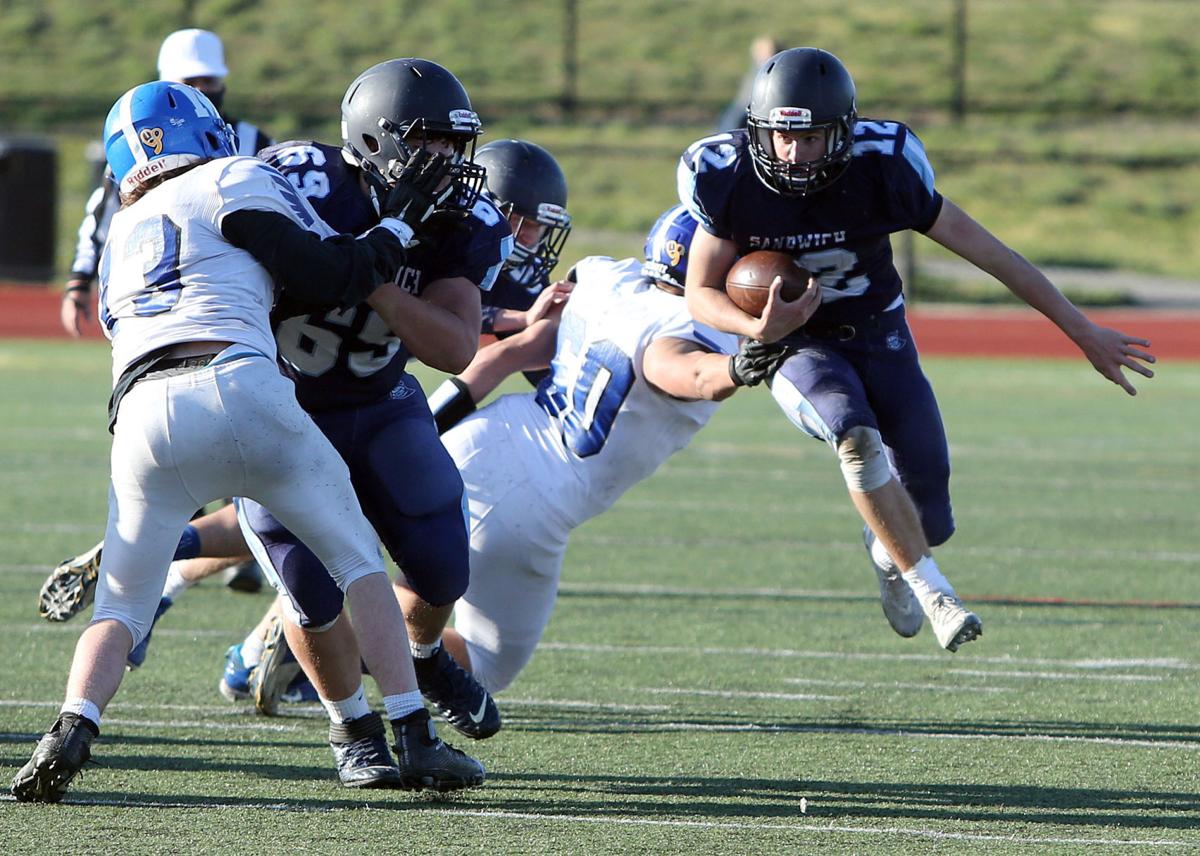 Sandwich High School quarterback Tim Bengtson leaps to get past a tackle during the Knights’ final game of the season against their rivals from Mashpee.

The 2021 Mashpee High School football team will always be remembered as the team that could have, and might have, had it been allowed to.

MHS finished off an excellent 2021 season by dismantling their Thanksgiving Day opponent in April, taking down Sandwich by a 28-0 score at DeConto Stadium on Friday, April 23, to finish off their year on a high note and end the best Blue Knight season in history on a low one. Mashpee caps off its season 6-1, a one-point loss to Abington its only blemish for the season. Sandwich ends up at 5-1, with its loss to the Falcons keeping the team from its first-ever perfect season.

Mashpee owned the game by owning the line of scrimmage. The Falcons were able to control the trenches on both sides of the ball from the first quarter on and ground out the Knights, scoring all four of their touchdowns in the game on the ground. MHS got scoring rushes from Caesar Hendricks, Ryan Hendricks, Nick Santos and Cam Sweeney. The team pushed the ball across the end zone in each quarter one time.

“We tried to control (the line of scrimmage) from the start, but Mashpee is Mashpee. There were some missed opportunities, some missed tackles, and I didn’t think that all of the calls went our way today,” Sandwich head coach Matt Maclean said. “At the end of the day it didn’t matter. I feel the score reflects the way the game itself, but I give our kids a lot of credit. That’s the first Sandwich team I’ve had that doesn’t quit—I love all of my other teams—but they fought to the end, even though it was (over).”

MHS head coach Matt Triveri said that when the teams meet up again in November, for the Thanksgiving Day game, that things will be much more difficult for the Falcons.

“I thought that (Sandwich) fought. I was very impressed with their fight level; they’ve got a good junior class and they’re going to be good next year,” he said.

Mashpee was able to grind the Knights down with a dominant running attack, led by Caesar Hendricks. The senior went for over 100 yards in the game and scored a touchdown. He was the go-to guy for the Falcons when they needed a chain-moving run, and the senior said it was not just him, but the play of his offensive line that made it happen.

The line led Hendricks to the game’s first touchdown with 4:58 left to go in the first period, capping off a 78-yard drive. The senior followed his blocking the left and found paydirt to put his team up by six. The offensive line then opened a gaping hole for Nick Santos to waltz through for the conversion that made it 8-0.

That drive saw Mashpee spread the wealth in the running game. Caesar and Ryan Hendricks each had big runs, as well as Santos, Jared Barr and Jack Vinitsky, who was back in the lineup for the first time all season after a concussion had cost him the year’s first six games. It was a precursor of what was to come as Mashpee just leaned on Sandwich and kept the pressure up for four quarters.

Sandwich looked like it might have a chance to get back into the game later in the quarter, but a penalty nullified its biggest play of the game. On second and 10 from their own 30, quarterback Tim Bengtson found Aiden Spurr for a big gain of 30 yards that would have the Knights riding a high and on Mashpee’s side of the field.

Sandwich’s next drive also saw the SHS sophomore QB make another big throw, and this one stood. Bengtson hooked up with Patrick Whearty for 20 on third-and-12 to keep a drive going. Bengtson scurried away from the Mashpee rush, kept the play alive with his legs and then found Whearty, who did a great job of cutting off his route and coming back to the football. Again SHS neared midfield after that big play, but then a couple of penalties pushed the Knights back and they were forced to punt into the wind with 2:02 left in the half.

With a short field ahead of them, Mashpee struck just before halftime to go up by two TDs. Caesar Hendricks got the drive started with a 10-yard run and then Ryan Hendricks ran for 14 to get to the SHS six with 1:10 left in the half. Two plays later Ryan Hendricks ran in from eight yards away to give his team a 14-0 halftime lead.

Coach Maclean said that the big momentum swing late in the first half was pivotal to the outcome.

“It should have been eight (point deficit), we shouldn’t have let them get that one at the end (of the first half), and then they get that other one (early in the third) and that’s tough to come back from that,” Maclean said.

Sandwich kept trying to get back into the game and it seemed that they might be picking up some momentum to start the second half. The team’s defense came up with a huge stop on fourth-and-three near midfield to get the ball back to open the second half as Connor Stack made a big tackle to take down Caesar Hendricks short of the line to gain.

Mashpee’s defense was up to the test, though. They got the ball back at their own 35 a few plays later when they snuffed out a screen pass on a fourth down that was completed to Conner Coutinho.

Caesar Hendricks then put Mashpee on his back and led the next drive that all but sewed the game up. The running back, who also had two interceptions on defense in the game, took a screen pass to the right and changed fields, turning nothing into a 15-yard run. He then broke loose for a gain of 20 that put the ball down at the SHS 23. Nick Santos then took over the load, picking up 18 yards on a third-and-nine run that put the ball down to the Sandwich 5. That drive was capped by Santos, who plunged in from the 2 to make it 20-0 with 2:51 to play in the third quarter.

In the fourth Mashpee added one more score. Sweeney finished off the Falcons next drive, which was set up by a Caesar Hendricks’ interception. Sweeney scored from the two with 9:39 left in the game to finish off the Knights.

After finishing his best season with his arguably his best game, Caesar Hendricks spoke for his teammates, when he said how he was feeling about completing the year.

“I’m just overwhelmed right now. It’s mixed emotions. I’m happy we won the game but sad that it’s coming to an end. I wouldn’t trade it for anything. I love my teammates, love my coaches. It was a great way to end the season,” he said.

With pride, Triveri said that his departing seniors are as good as any that he has had.

“I can’t say enough about our backs, they fought today. Caesar Hendricks is the toughest kid in our league, pound for pound, and Nick (Santos) ran hard, too, and Ryan did a great job,” Triveri said. “This is an extraordinary senior class...in the end they did a great job. It’s just a great senior class. I don’t know what the future holds here for football, we only had 30 kids and we’re losing 11. We’re trying to get kids back into the program, we just need kids. We need bodies. We’ve been blessed here, we’ve had great players, and this class continues a long lineage of success. I told the seniors that they can put themselves in that great pantheon of great teams here.”