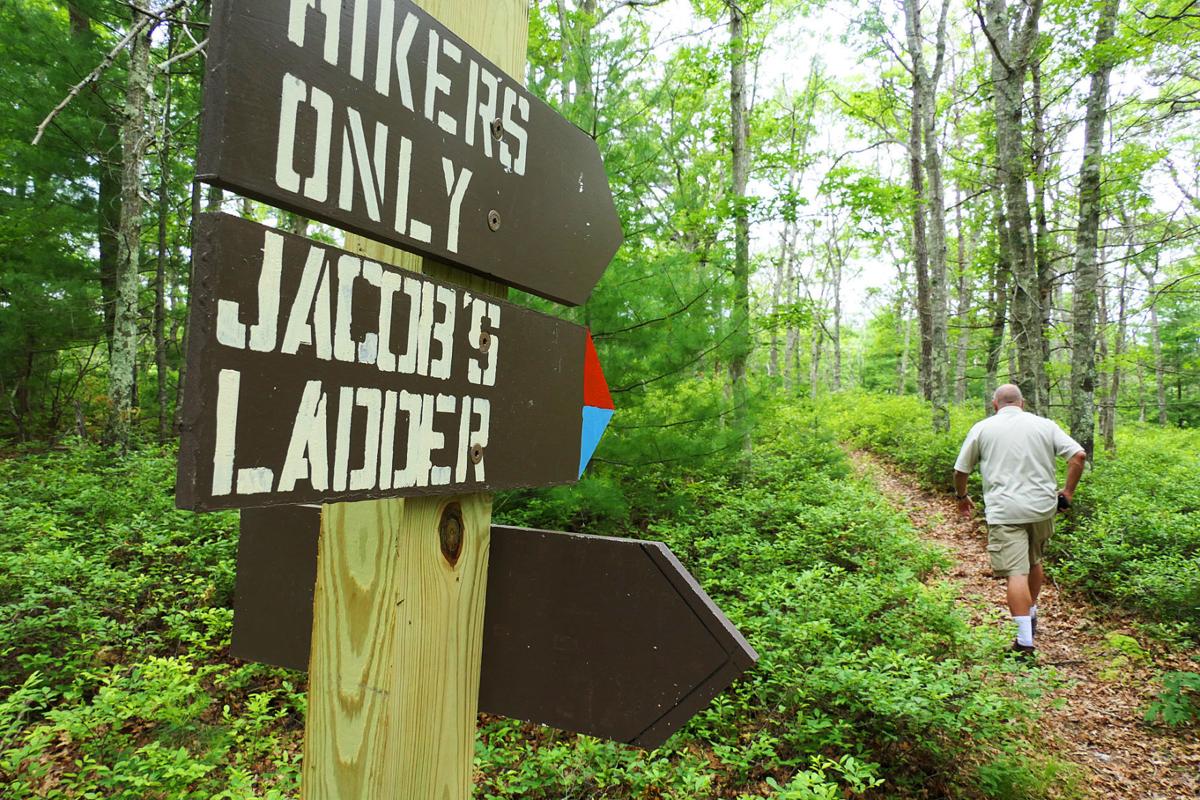 New signs at the Maple Swamp Conservation Lands designate trails that are for hikers only. The town says keeping hikers and mountain bikers separate increases safety. Many trails in this conservation area — the town’s largest conservation area — have been cleared and new signs added to guide walkers and cyclists. The trails have also been mapped using Global Positioning Satellite points so visitors can navigate the trails using their smartphones. 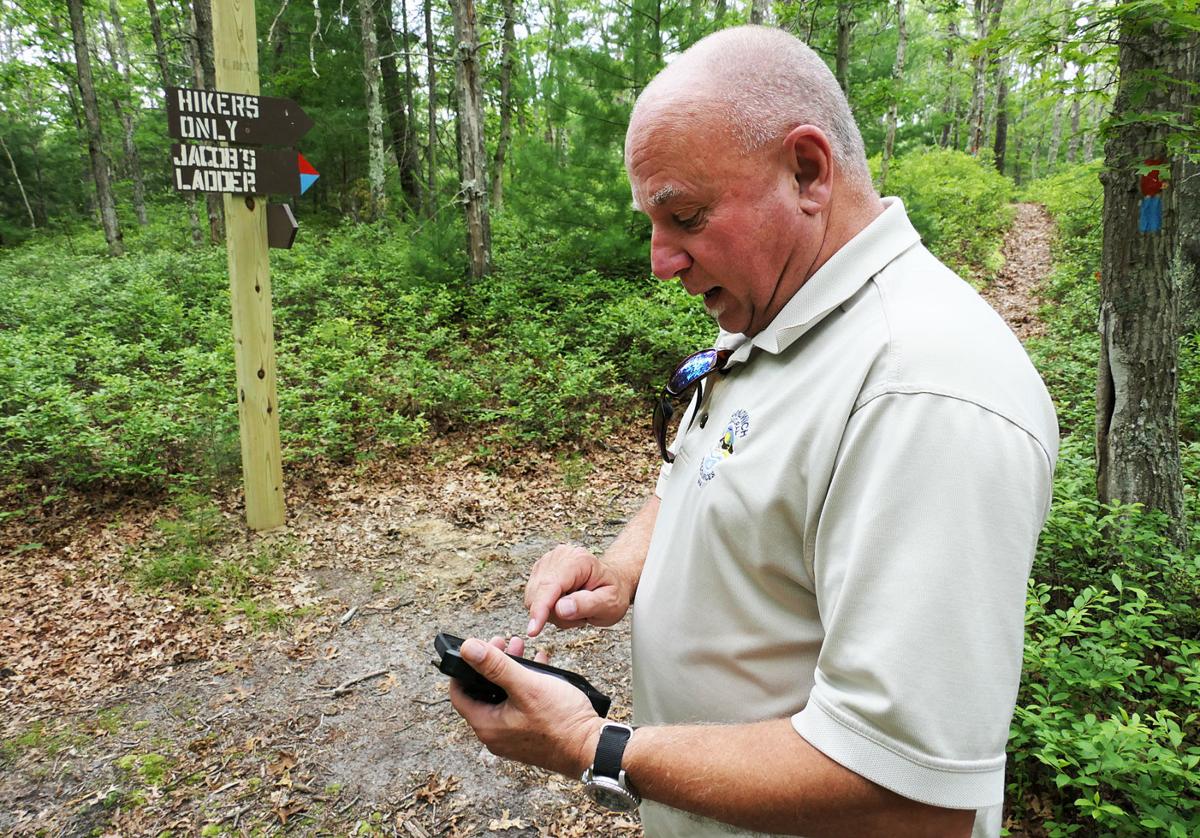 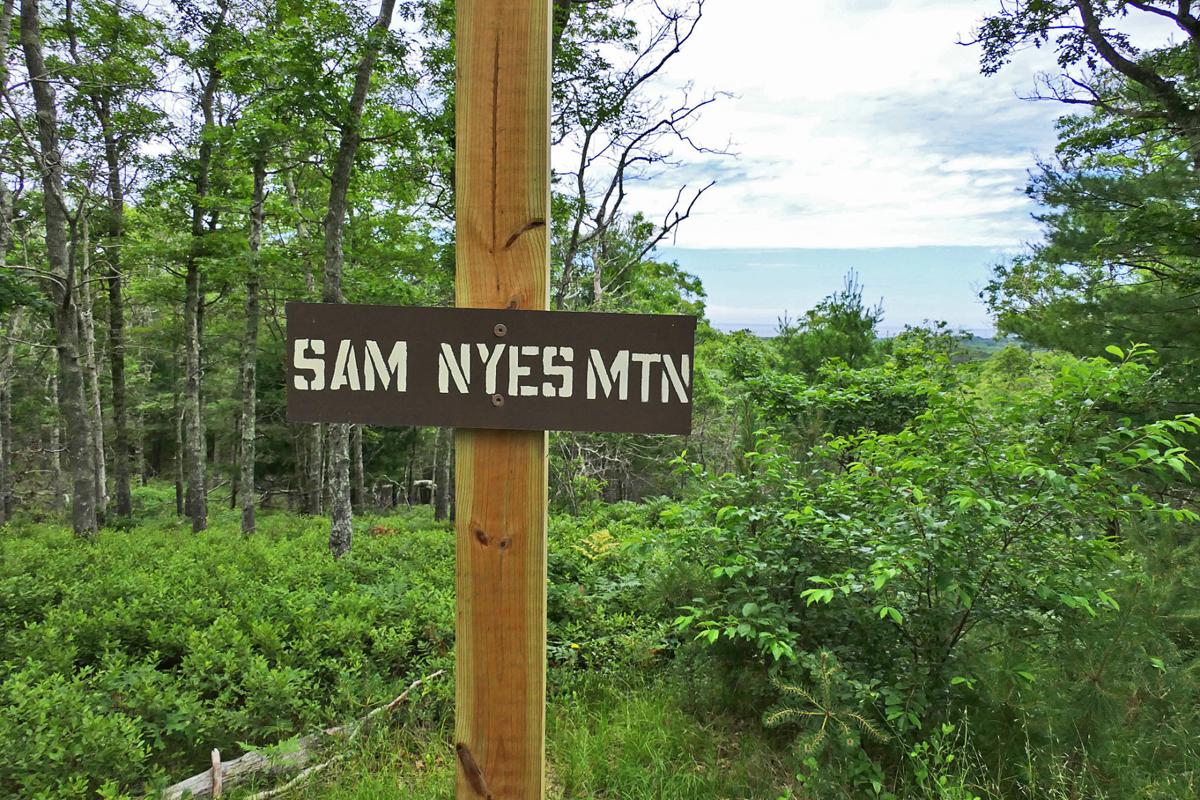 Hikers who reach the peak of Sam Nyes Mountain will be treated to a view of Cape Cod Bay. 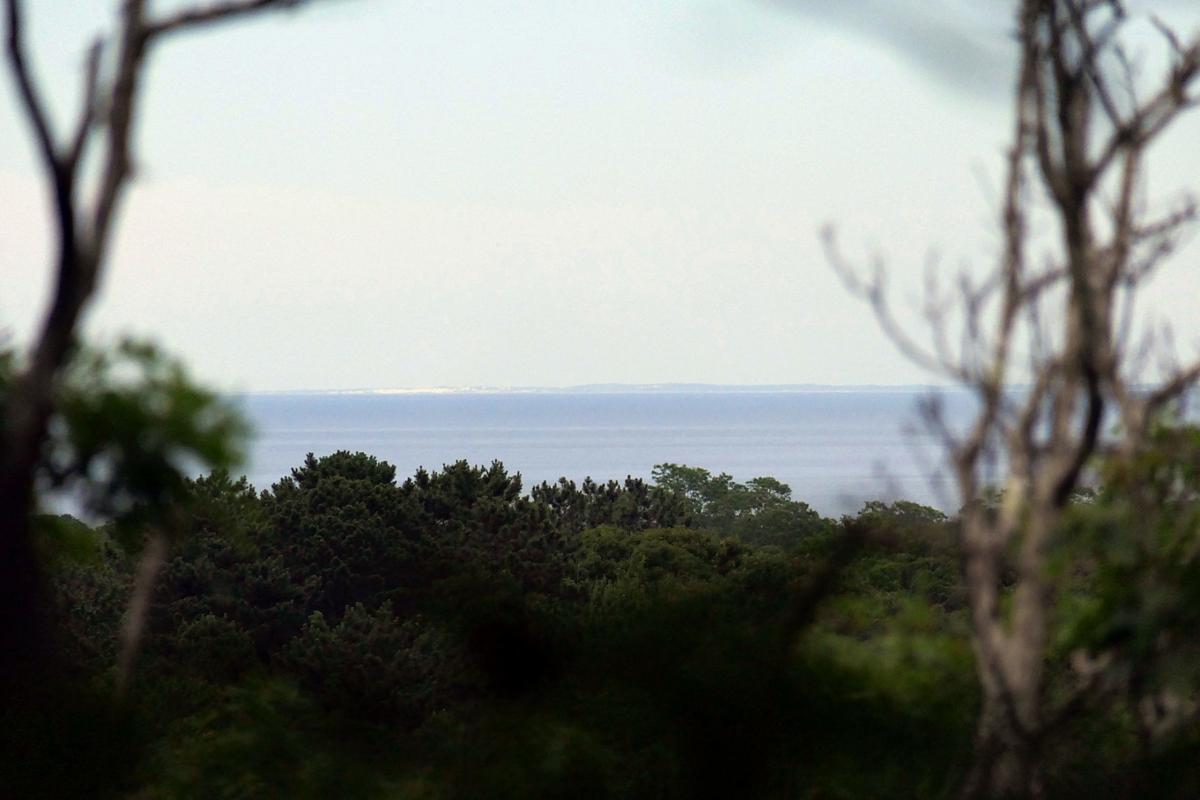 A distant view of the bay from the top of Sam Nyes Mountain. 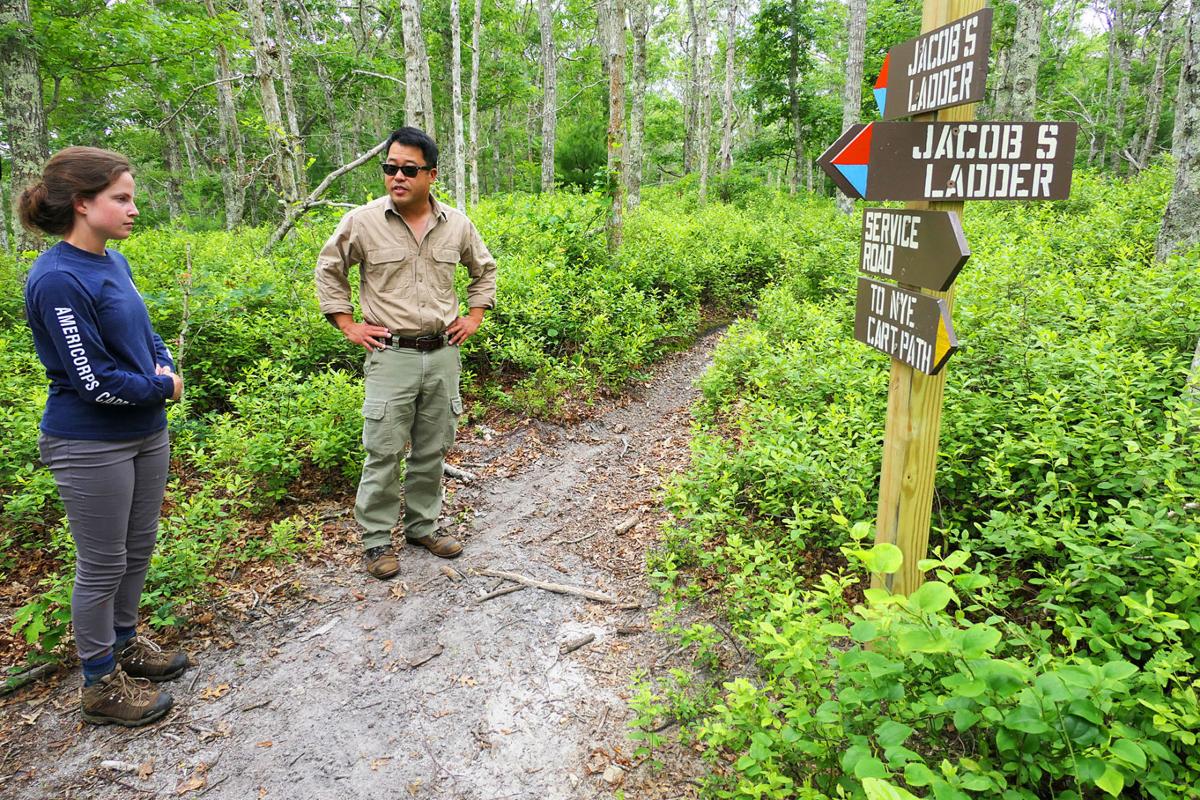 Americorps volunteers Allison Bargabos and Sandwich Assistant Director of Natural Resources Joshua Wrigley stop next to some of the new signs. The artificial materials used for the signs are made to look like wood but will last far longer. 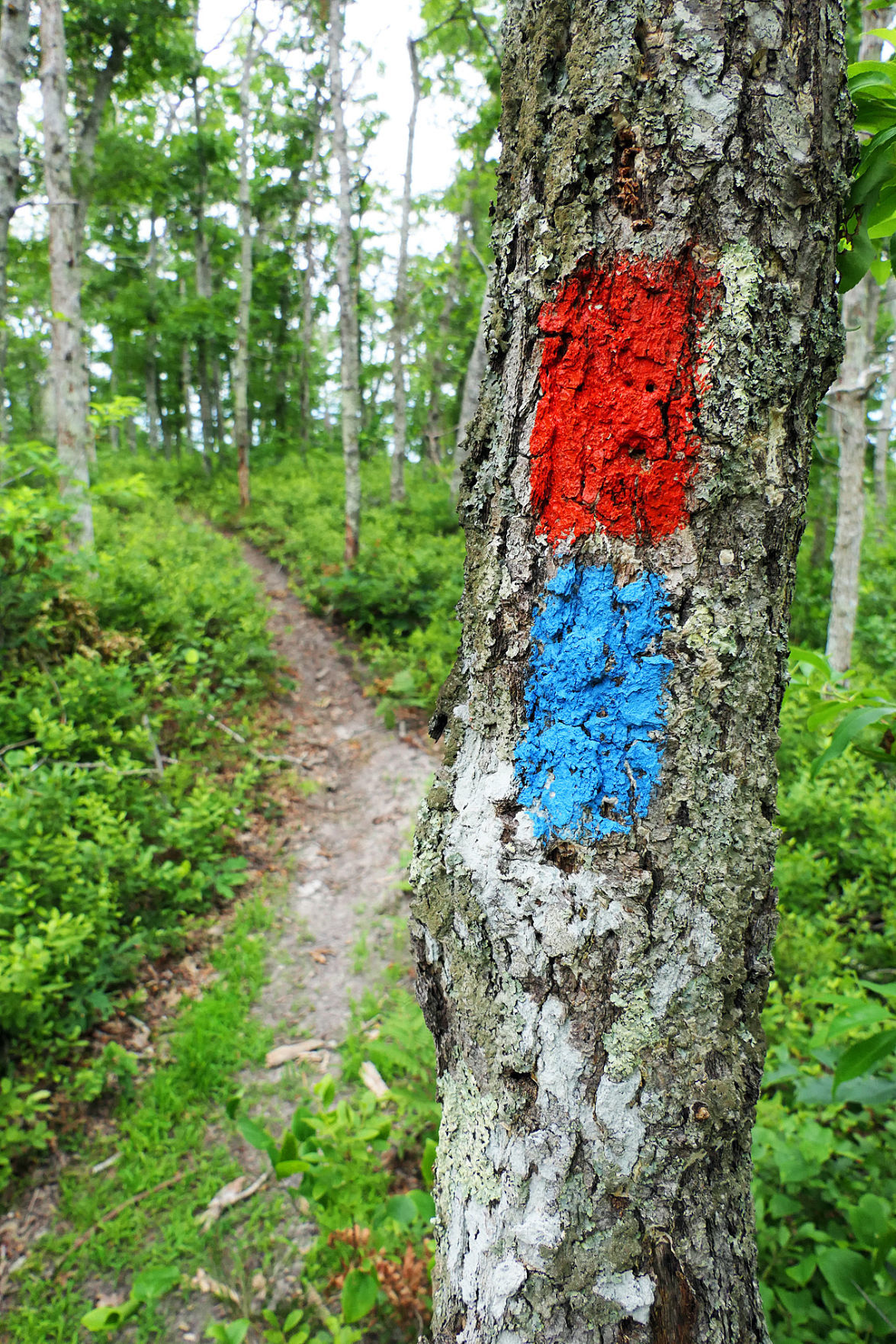 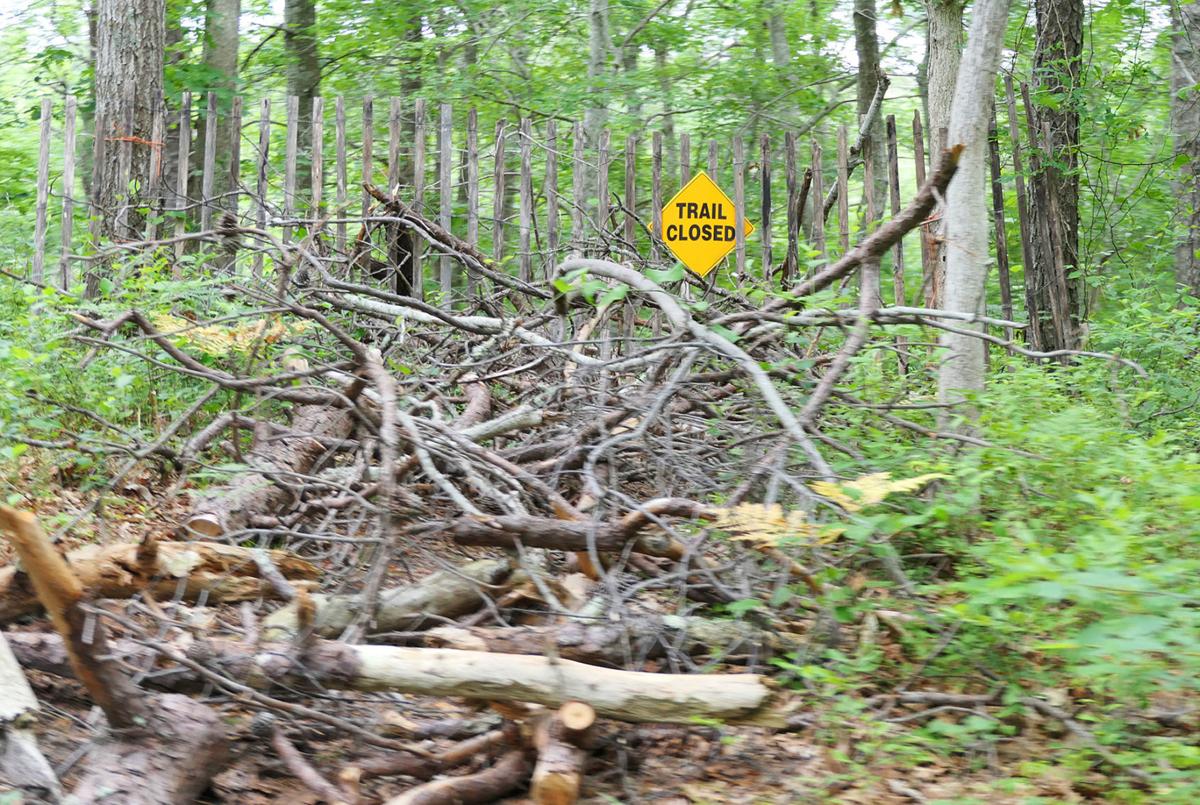 A path used by cyclists was closed due to its close proximity to walkers.

New signs at the Maple Swamp Conservation Lands designate trails that are for hikers only. The town says keeping hikers and mountain bikers separate increases safety. Many trails in this conservation area — the town’s largest conservation area — have been cleared and new signs added to guide walkers and cyclists. The trails have also been mapped using Global Positioning Satellite points so visitors can navigate the trails using their smartphones.

Hikers who reach the peak of Sam Nyes Mountain will be treated to a view of Cape Cod Bay.

A distant view of the bay from the top of Sam Nyes Mountain.

Americorps volunteers Allison Bargabos and Sandwich Assistant Director of Natural Resources Joshua Wrigley stop next to some of the new signs. The artificial materials used for the signs are made to look like wood but will last far longer.

A path used by cyclists was closed due to its close proximity to walkers.

Climb to the highest point in the town’s Maple Swamp Conservation Lands—up a steep path lined with blueberry bushes and shaded by oaks—and if you’re not already winded, the view will take your breath away.

This is Sam Nye’s Mountain, carved into the Cape’s topography by glacier activity almost 20,000 years ago. On a clear day, you can see all the way north to the Pilgrim Monument in Provincetown.

Even on a hazy day, Barnstable Harbor is visible across Cape Cod Bay. Though the “mountain,” at 216 feet above sea level, is not the highest point in Sandwich, it is up there.

“It’s an unusual elevation for the Cape, carved out during the Pleistocene era as the glacier retreated,” said Joshua Wrigley, assistant director of natural resources, during a recent tour of the site. “It is among the highest points on the Cape.”

The view from the top has been seen by Native Americans, hikers, farmers and their oxen for hundreds of years, said John N. Cullity, whose great-great-grandfather owned the land and is the mountain’s namesake—Samuel Nye.

Mr. Nye was a dairy farmer who owned much of the land that makes up Maple Swamp and who, upon returning from the Civil War, purchased the five acres encompassing the high ridge.

“When I was a boy, those wooded acres were among the best places to get lost,” Mr. Cullity said during an interview this week. “You were never quite sure where you were and that was a fun feeling.”

Visitors who want to get lost in Sandwich’s largest conservation area can still do so, but those who prefer maps and marked trails will be delighted by the recent transformation of the vast area.

They have cleaned up, mapped and clearly demarcated trails by color. The crews removed plastic markers from tree trunks and replaced them with environmentally sensitive paint, Director of Natural Resources David J. DeConto said.

“We still have work to do, only about one-third is completed, but there’s plenty for hikers and bikers to see already,” Mr. DeConto said.

Mr. DeConto’s staff and volunteers have mapped the trails with Global Positioning Satellite points so visitors can navigate several miles of trails using their smartphones. They can do so by downloading a Maple Swamp map via an Avenza Systems, Inc. app.

Boy Scouts have built kiosks at the entrances of Maple Swamp and other conservation lands that hold overall maps of the areas. Those areas include Cook Farm off Route 130, which compasses about 49 acres, and Murkwood Conservation Lands, which encompasses about 129 acres off Route 6A in East Sandwich.

AmeriCorps is a national program designed to foster civic engagement by improving neighborhoods and parks across the country.

The Sandwich Department of Public Works was also recruited to remove vegetation and debris from the entrances.

“We want more people to come here and use these properties, and if they see people doing things they shouldn’t be doing, we want them to tell us,” Mr. DeConto has said. “The more people come here, the more eyes we have.”

The town will sponsor a grand reopening of Maple Swamp, featuring tours and a historical overview by Mr. Cullity next month. It is tentatively scheduled for August 11. Details will be provided as the date nears, Mr. DeConto said.

Mr. Cullity said he is pleased that Mr. DeConto is seeking to lure more visitors to Maple Swamp.

Past administrations had closed some of the conservation lands to visitors because vandalism was rife.

About 20 years ago, for example, the 380-acre Ryder Conservation Lands off Cotuit Road was open to the public all year. But Mark Galkowski, the previous director of natural resources, closed the South Sandwich access road—and much of the area around it—after vandals destroyed summer campers’ property and burned down a building.

Cars are still not allowed to drive down to the water at Ryder. Drivers must park in designated parking areas and walk down to the beach through the wooded area.

Mr. Cullity said there are many species of trees in Maple Swamp. In a column he wrote for the Enterprise in 1990, he described the wooded areas that were owned by many different farmers and landowners.

“All of the wooded ridge and much of South Sandwich was divided into woodlots of many shapes and sizes. The lots were often sold or traded, and some had names that were used by local people for many years. The names usually harked back to some previous owner, or to a geographic feature—the Allen Lot, the Sanders Lot, the Maple Swamp Lot and the Hill Lot. From these lots came great quantities of firewood, and oak and pine for timbers and boards.

“Today we find the common Cape Cod mix of pitch and white pines, white and black oak, some small beech and the occasional hickory. Tupelo and red maples grow closer to the water table. There are some unusual features of interest to naturalists—a quaking bog lies mostly within the golf course property, and there are vernal pools.”

The land was given and sold to the town for conservation purposes over many years, Mr. Cullity said.

In 1966, a Sandwich Quaker Friends group sold a large parcel to the town and other owners followed suit, Mr. Cullity said. The Sandwich Water District still owns a piece and the town’s ultimate goal is to completely connect with the 1,200-acre West Barnstable Conservation area to the east.

At one point a resort was planned for Sam Nye’s mountain, but residents raised environmental concerns and halted the project, according to Mr. Cullity.

“The Sandwich Water District built a fine parking lot in 1991,” he added.

Mr. Cullity said he welcomes the efforts to open the lands to everyone, but has a twinge of regret.

“I am spoiled,” he said. “It was the one place left that was a real wilderness. We didn’t know who owned what or where we might end up. It was one of my favorites.”