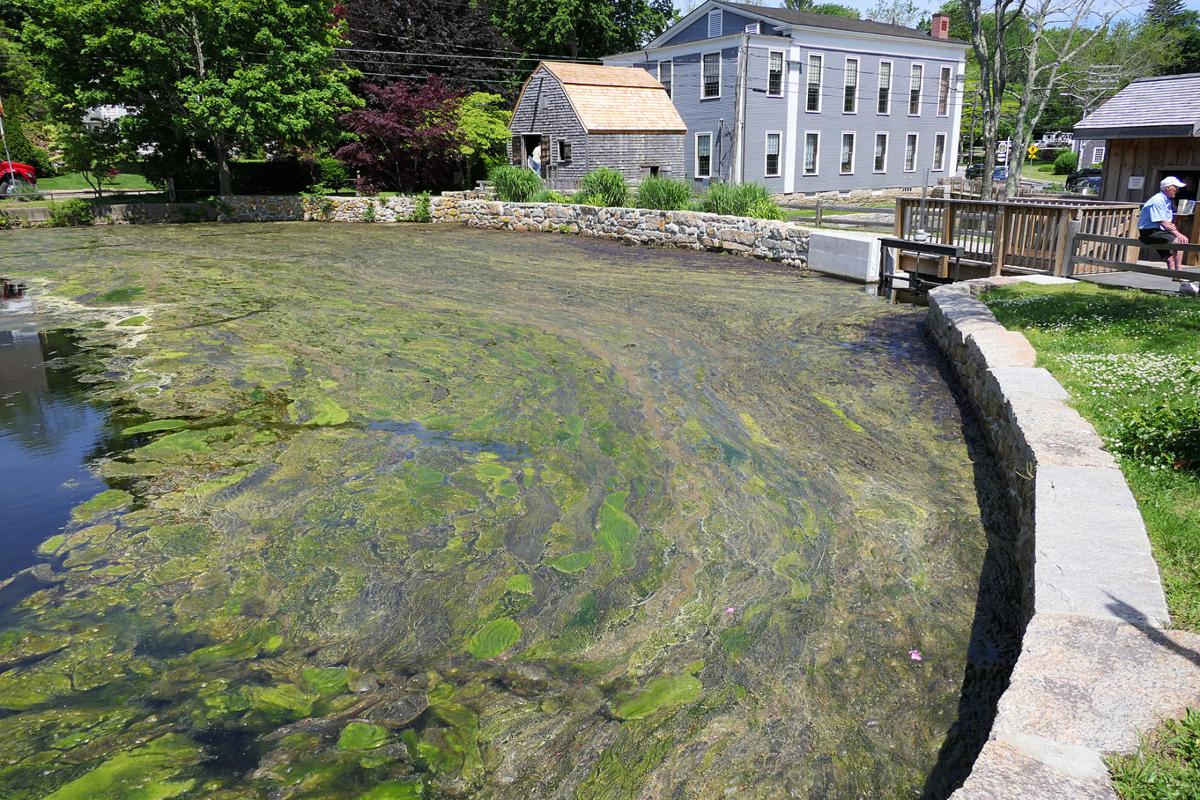 A thick mat of algae pushes up against the dam near the Dexter Grist Mill in Shawme Pond. 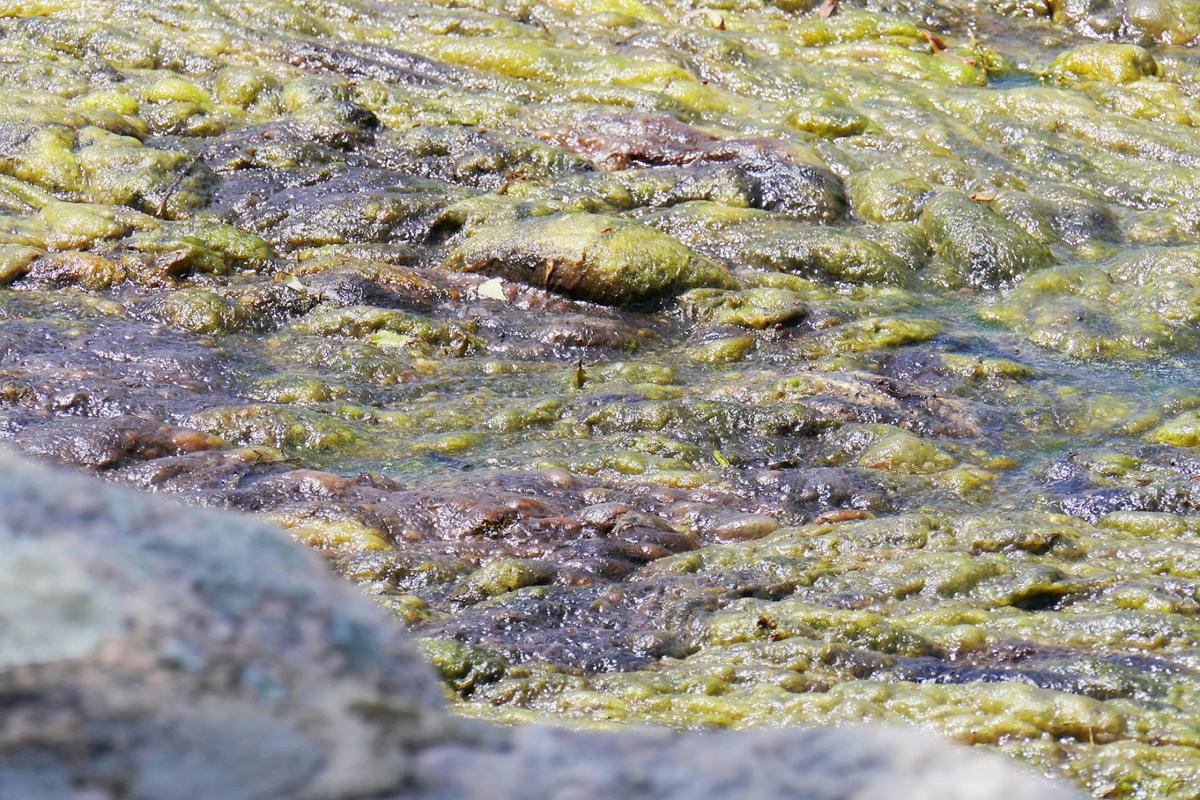 A close-up of the algae on Shawme Pond 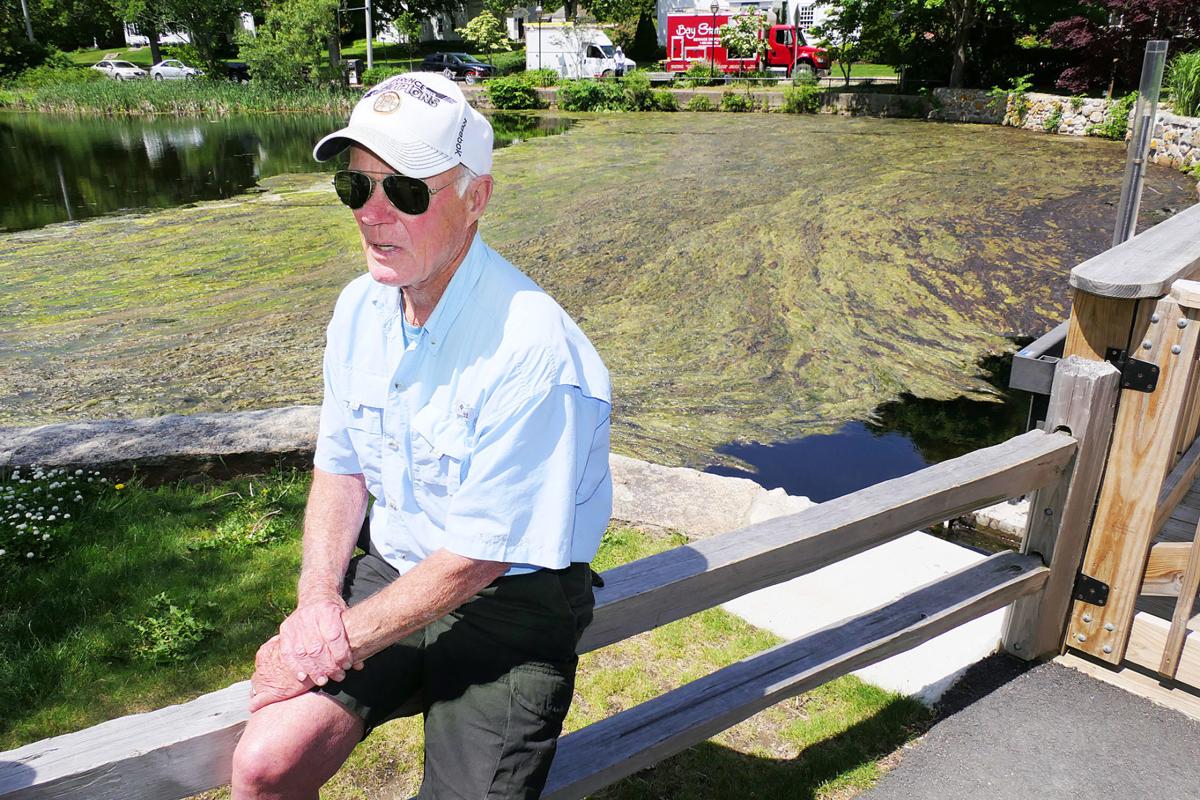 Retired wetland scientist Norman Hayes speaks about the algae seen behind him growing in Shawme Pond. 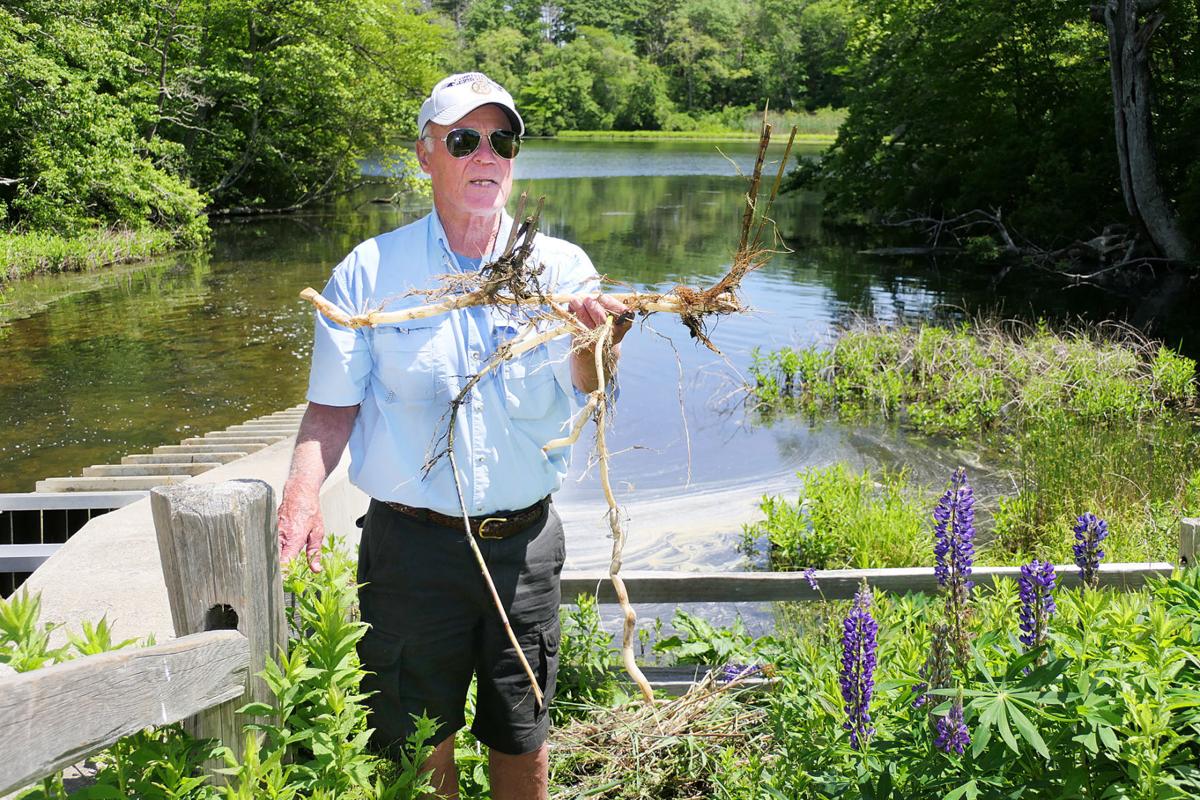 Norman Hayes holds up the root of a phragmites plant. 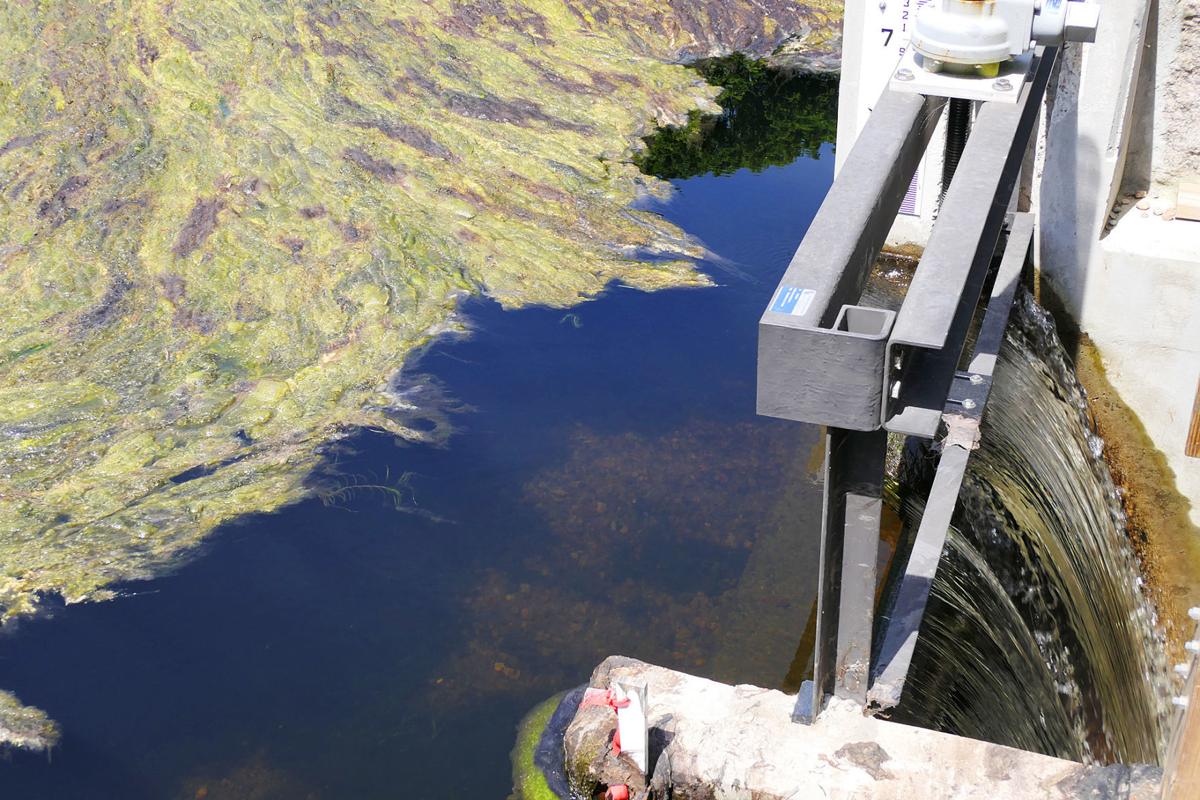 The algae nears the top of the fish ladder on Shawme Pond. 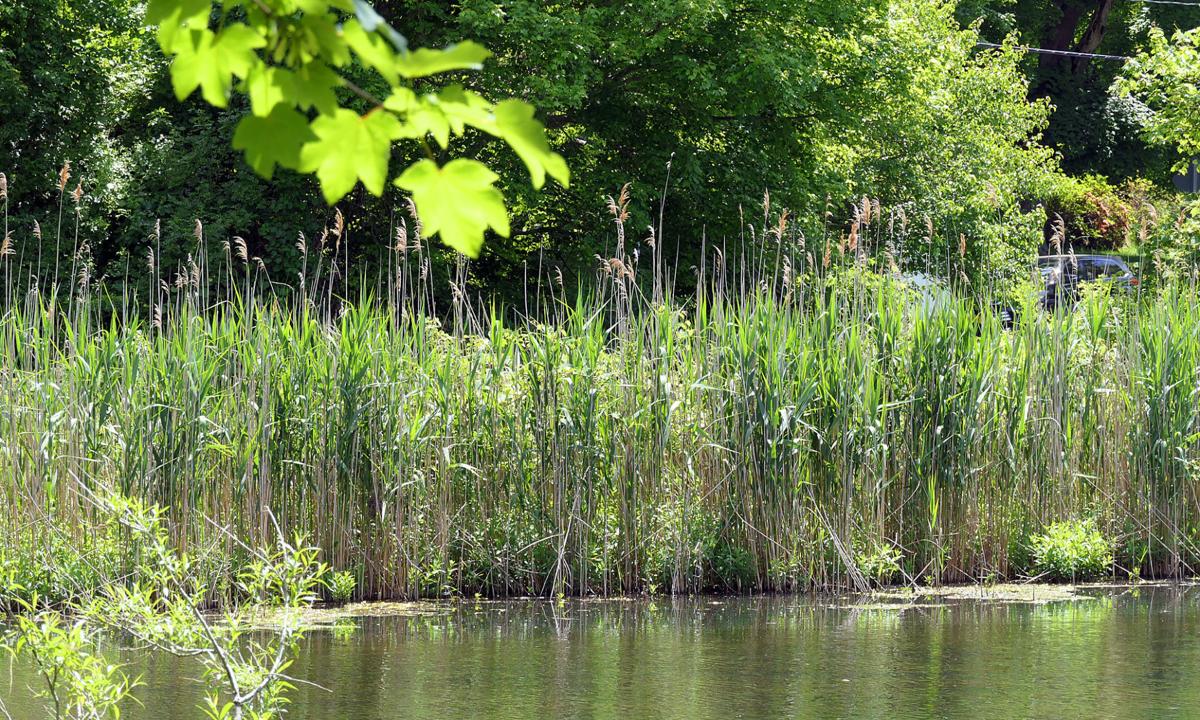 Phragmites grows at the edge of Shawme Pond in Sandwich. The plant is invasive and chokes out other plants that provide habitat for animals. Volunteers are working to get rid of the reeds. 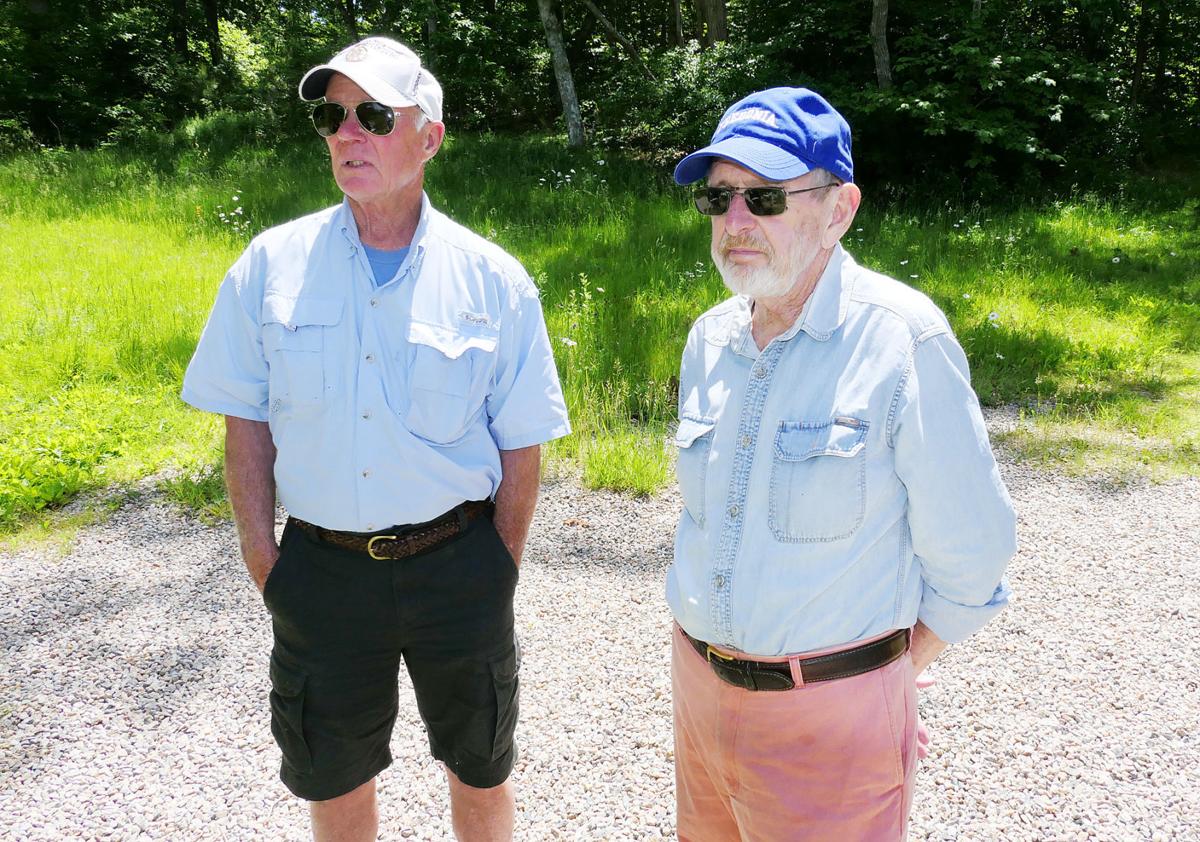 A thick mat of algae pushes up against the dam near the Dexter Grist Mill in Shawme Pond.

A close-up of the algae on Shawme Pond

Retired wetland scientist Norman Hayes speaks about the algae seen behind him growing in Shawme Pond.

Norman Hayes holds up the root of a phragmites plant.

The algae nears the top of the fish ladder on Shawme Pond.

Phragmites grows at the edge of Shawme Pond in Sandwich. The plant is invasive and chokes out other plants that provide habitat for animals. Volunteers are working to get rid of the reeds.

Tourists visiting Sandwich’s historic village this week walked to the edge of picturesque Shawme Pond, peered through their cameras, and quickly backed away.

They had gotten a glimpse—and a whiff—of the 20-foot-wide, green-and-brown blanket of algae extending from the shore to almost the middle of the village’s aquatic pond.

“A snapping turtle got stuck in the algae the other day,” said Norman W. Hayes, who is leading a volunteer effort to clear invasive phragmites reeds from the banks of the pond. “My wife tried to help by clearing the algae, but she couldn’t lift it. It’s as heavy as a carpet.”

Mr. Hayes, a retired wetlands scientist, said he is concerned that the uncommonly large algae bloom will harm the young herring, called fry, that were spawned earlier this spring.

“I’ve lived here a long time and I’ve never seen it like this,” said William Collins, who was looking at the green slime with Mr. Hayes Wednesday morning, June 12. “Sometimes in late summer we’ve seen some smaller patches, but nothing like this.”

Natural Resources Director David J. DeConto said during an interview on Wednesday that the town is well aware of the problem.

“We’ve never seen it so heavy this early,” Mr. DeConto said. “It’s from the heavy rain we’ve had this spring.”

The rain has caused phosphates from fertilizer to run into the pond and cause the outbreak of Cyanobacteria, also known as blue-green algae, Mr. DeConto said. It has not yet caused a reduction of Phytoplankton, the favorite food of fish, but the town is keeping a close eye on those levels.

The Massachusetts Division of Fish and Wildlife has been alerted and if the algae blooms continue to proliferate, the town—and/or the state—could take remedial action, such as physically removing the algae from the pond, the natural resources director said.

“I’m hoping that if the rain lets up, the problem will take care of itself, but we’ll see,” Mr. DeConto said.

On the good news front, volunteers continue working to clear away the rapidly spreading phragmites reeds, and have completed the first two phases of their eradication project.

Phragmites are gone from the pond edge of Old Town Cemetery and the herring spawning area near the Upper Shawme Pond. The tawny-colored, tassel-topped reeds are an exotic grass that has invaded the historic waterway in the past few years and is choking out native wetland vegetation.

Mr. Hayes, who recently received permission from the conservation commission to launch his attack on the killer weed, was especially concerned about clearing it from the herring’s spawning area. That clean, clear water runs beneath a dam and a herring run in the woods near the site of an old factory.

The newly renovated herring run allows thousands of herring to reach the upper pond where they spawn each spring. The phragmites, which spreads at alarming rates, have already reduced the number of herring in the pond, Mr. Hayes said.

Mr. Hayes and his group of volunteers from the Sandwich Landscape and Tree Committee, and others, have fanned out around the pond, removed the heads of the towering reeds and carried them off site in plastic bags.

Mr. Hayes originally came before the conservation commission in 2018 proposing that the phragmites be sprayed with glyphosate, an increasingly controversial herbicide commonly known by its trade name of Roundup, a Monsanto product.

That option is no longer possible. The town’s health director announced this spring that Sandwich will no longer allow the use of glyphosate on town property, nor can it be used by town departments.

Mr. Hayes and tree committee members have offered to come back for three repeated cutting sessions—this summer, this fall, and next summer.

He predicted that 99 percent of the phragmites would be eliminated by the final cutting in July 2020.

“We have seen this plant grow from 9,000 to 11,000 square feet at Shawme Pond in the last two years,” Mr. Hayes told the commission members last December. “The phragmites are so tall that if you stand on Grove Street, you can’t even see the First Church steeple.”

The tall, tasseled Phragmites australis—also known as the common reed—grows all along the Eastern Seaboard and is recognized as an invasive plant by the US Fish and Wildlife Service.

Phragmites is “an aggressive wetlands grass that outcompetes native plants and disrupts native animals,” according to the fish and wildlife website.