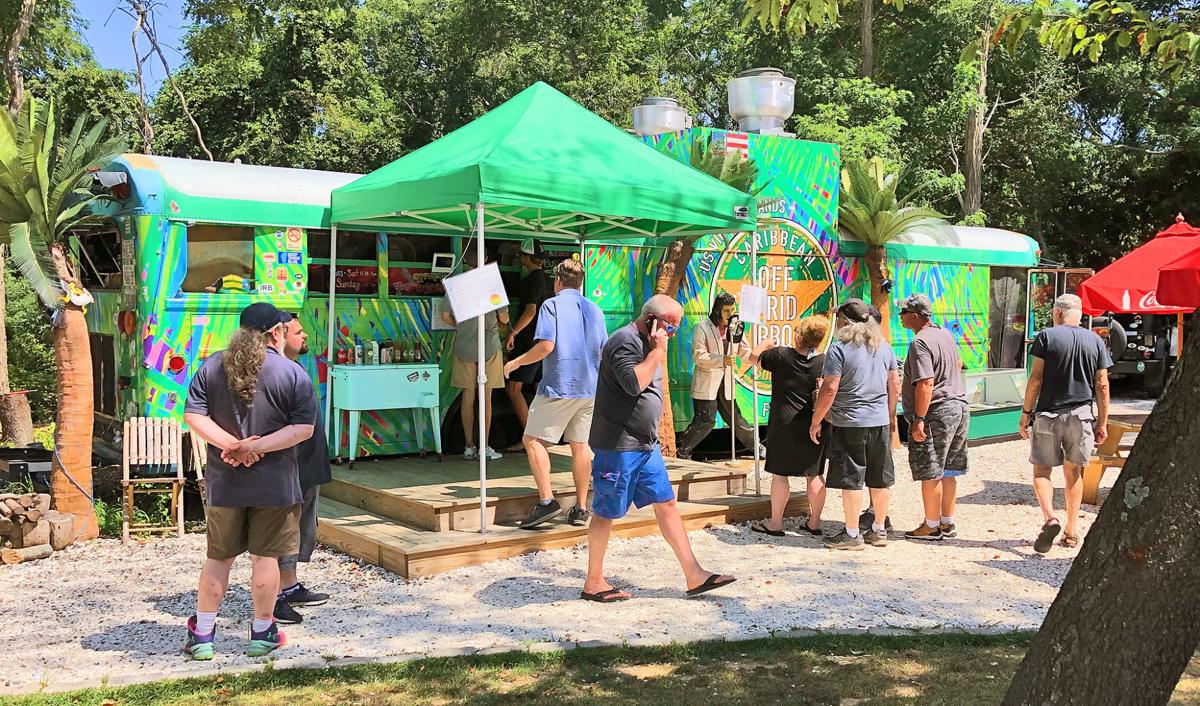 Customers stand in line at the Off The Grid BBQ truck near Freezer Road. 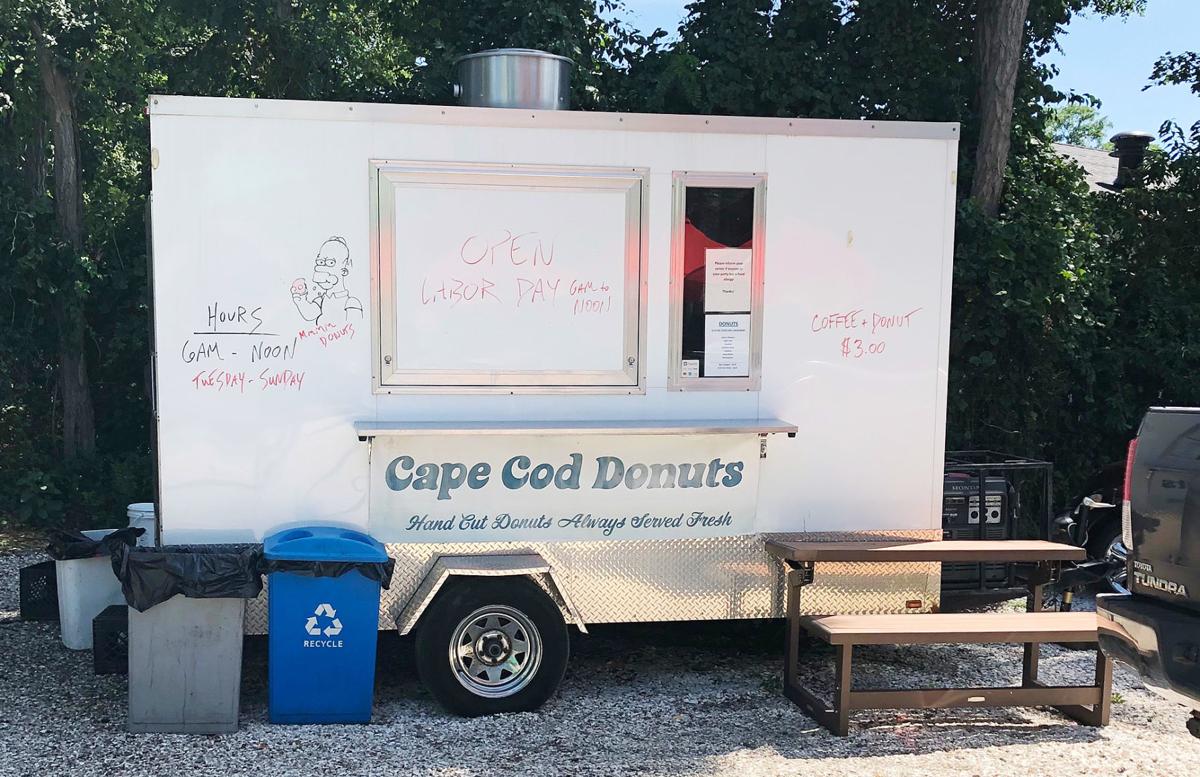 The Cape Cod Donut truck, which sits next to Off The Grid, is a big draw most mornings. 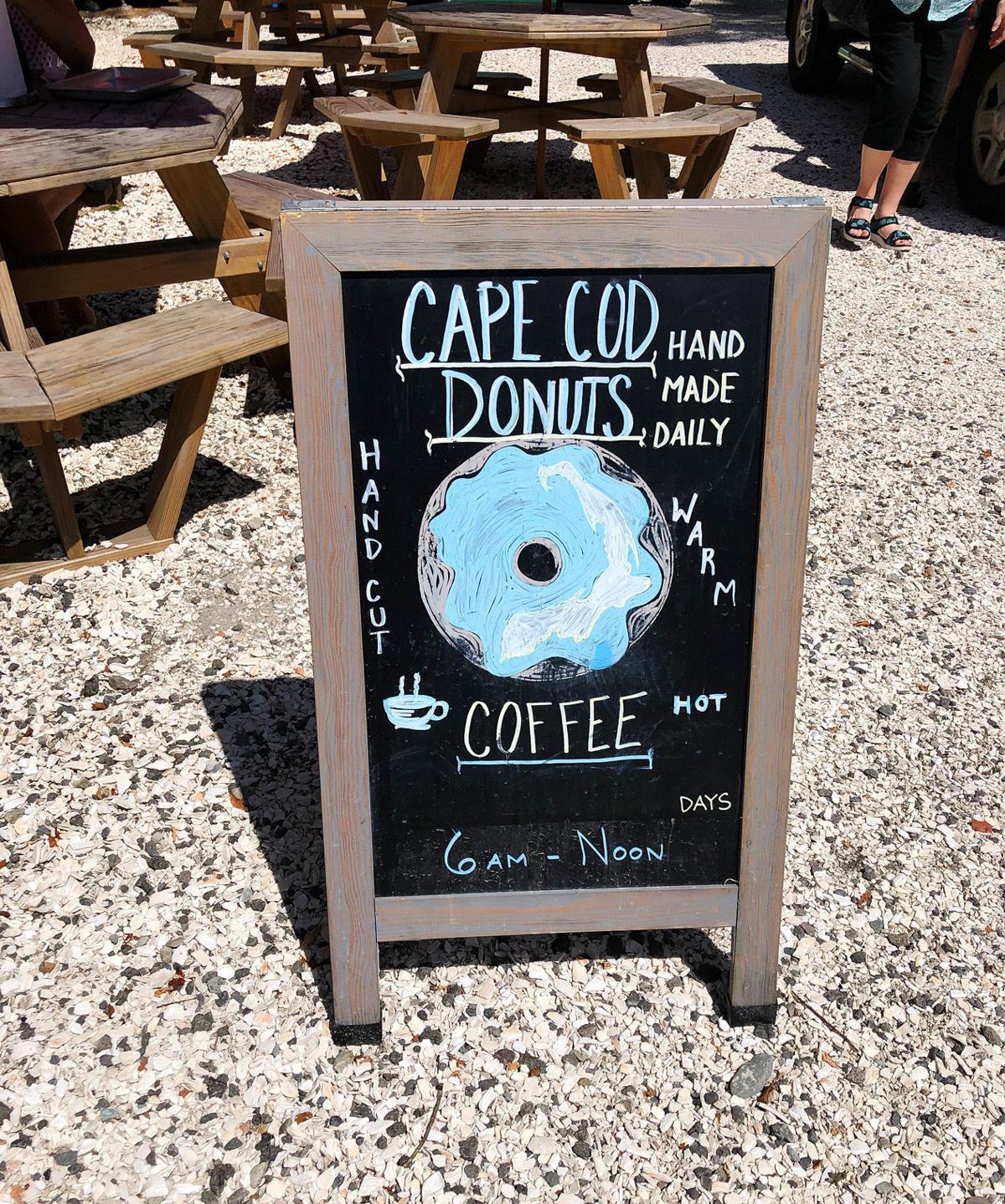 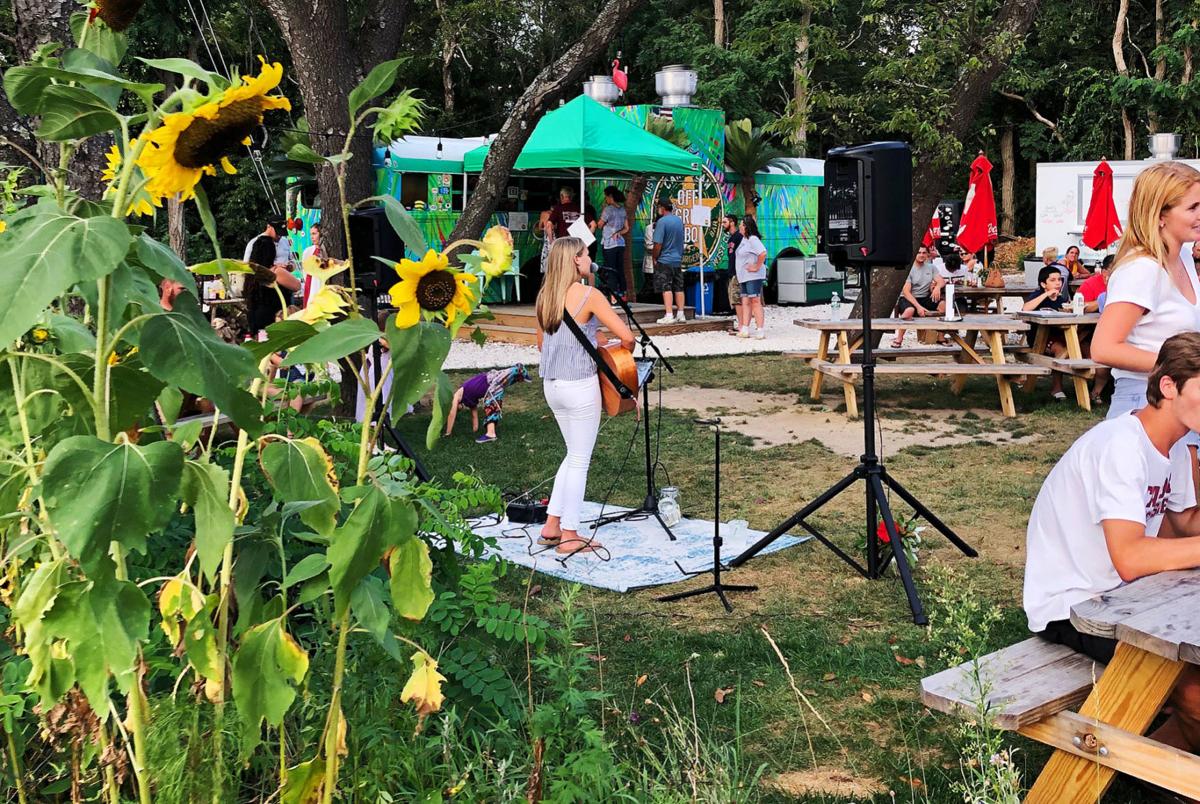 A performer offers Off The Grid customers something to listen to as they wait to order.

Customers stand in line at the Off The Grid BBQ truck near Freezer Road.

The Cape Cod Donut truck, which sits next to Off The Grid, is a big draw most mornings.

A performer offers Off The Grid customers something to listen to as they wait to order.

While the tang of smoke and vinegar fills the air, cars fill the parking lot in front of a food truck tucked into a leafy grotto behind Shipwreck Ice Cream on Freezer Road.

A singer croons a Sheryl Crow tune while children scamper around wooden picnic tables. A long line of people waiting to place their orders forms alongside the bright green truck.

A woman suddenly leans out of the customer window.

“All you people in the back of the line—there’s at least a 25 minute wait,” she yells.

The customers let out a collective groan but nobody leaves.

This is a day in the life of Off The Grid BBQ, which has been successfully serving barbecue and burgers in that spot for two seasons.

“I love the ribs, my husband loves the burgers,” said Stephanie Romanowizc, of Sandwich, who says she and her family come to Off The Grid every other week. “It’s hard to find authentic Caribbean food on Cape Cod.”

“It’s different and it’s a great place to come if you have kids. They can run around while you eat and you don’t have to tell them to be quiet,” says Ms. Robertson, who is a fan of the smoked chicken wings.

Such happy customers have served up a dilemma for the board of selectmen, who are trying to avoid a food fight.

This summer, the selectmen have received complaints from restaurants and coffee shops in the vicinity of the food trucks. The trucks, they say, are siphoning business from the established brick-and-mortar restaurants.

“They are not happy,” David J. Sampson, chairman of the selectmen, said of adjacent restaurant owners at the Sandwich Marina.

He said specifically that nearby Mary Lou’s coffee shop was upset that smaller trucks, nestled next to Off The Grid, are selling coffee and donuts.

Mary Lou’s owners could not be reached for comment on Thursday.

Across town, a food truck materialized near Aubuchon Hardware’s store on Cotuit Road this summer. The selectmen heard complaints about that truck—which has since departed—from restaurants in the adjacent shopping plaza, Mr. Sampson said.

“The question is whether we need to look at changing zoning bylaws, or creating other ways to regulate food trucks,” Mr. Sampson said.

Selectman Michael J. Miller said this week that he, too, has heard complaints from long-established restaurateurs.

“How would you feel if you’d spent $100,000 to build a place and then a food truck comes in and takes away all your business?” Mr. Miller asked. “I think the selectmen will have to look at this.”

Other towns on the Cape and throughout New England have looked at ways to regulate food trucks, such as limiting them to certain areas and/or having them come to town only on certain days.

Not all businesses are threatened by their presence.

Greg McGrath, the owner of Shipwreck Ice Cream, the Aqua Center dive shop, and the property on which Off The Grid sits, says his businesses have a “symbiotic relationship” with the barbecue truck.

“It’s a good situation for us,” Mr. McGrath says. “It’s a complementary business to the ice cream shop. We used to sell hotdogs for people who wanted more than ice cream, so it works out really well.”

Chelsea Stathopoulos, the owner of Off The Grid, says she understands how other restaurants feel, but believes there is room for everyone.

She said she and her husband had a restaurant in St. Thomas, Virgin Islands, but the hurricane that wiped out much of the Caribbean a few years ago also decimated their business.

They came to Cape Cod to be near their families and started over with the food truck, Ms. Stathopoulos said.

She said they offer true barbecue and smoke all their own meats every day.

“It hasn’t been easy fo us,” she said, adding that they deliberately do not offer fish because there are several seafood restaurants near the marina and Off The Grid does not want to affect their businesses.

Ms. Romanowizc, one of the food truck’s regular customers, says she disagrees that food trucks hurt other businesses.

“A diversity of culinary options makes more people want to go out,” she said. “A little competition makes existing restaurants better because they try harder.”

It is easy to cry fair market competition and consumer choice but it is also appears local restaurants, the ones who pay real estate taxes on those brick and mortar buildings contributing to Sandwich's local tax base, are not getting a fair shake on this one. They pay real estate taxes on the building and the ground beneath and personal property taxes on their equipment. Is that worth something to the people of the town of Sandwich? Why not have some rules around mobile vending locations so there are reasonable expectations by all about where they might pop up? It doesn't appear anyone is trying to ban anything they just want to create expectations. If I was a restaurant next to a hardware store and that store decided to start acting like a restaurant I think I would be concerned too. Is everyone really working together? Are these restauranteurs entitled to their opinion? This taxpayer thinks they have earned the right to be heard.

Restaurant owners should not have a say in a food truck parking "near" their establishment. The fact that they spent money to build a brick and mortar building means nothing to me as a consumer. The food trucks have costs in purchasing and maintaining a mobile restaurant. Just because the restaurants were their first does not mean competition should be unable to enter the area. It is up to the consumer to decide where and what they would like to eat. The food trucks offer options and an atmosphere that attracts their customers. Sorry to the businesses that feel they cannot compete but that is capitalism baby!