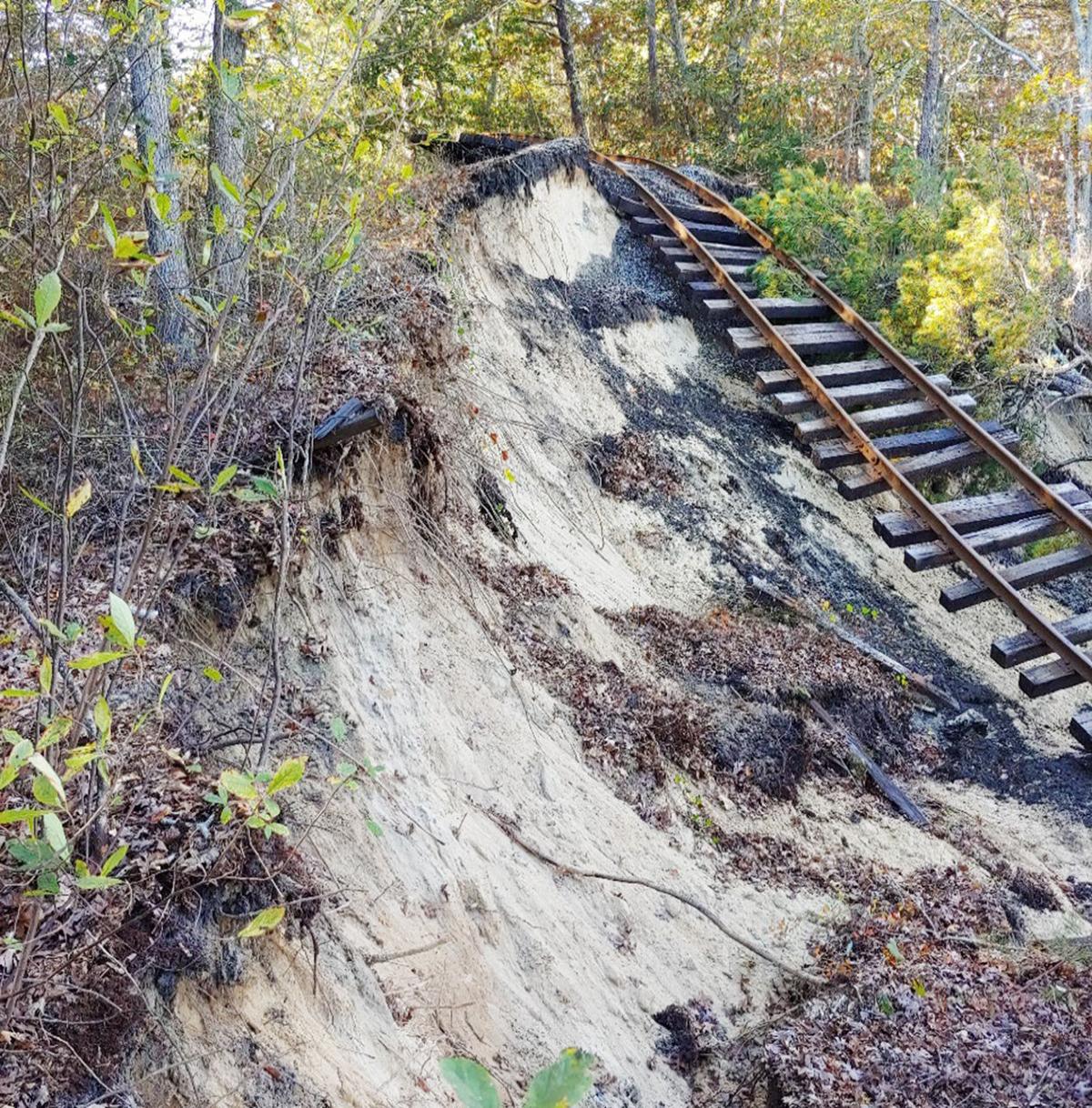 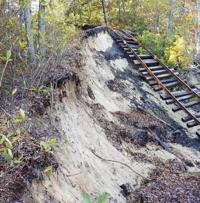 A crumpled set of train tracks rest on the collapsed embankment on the southern end of Lily Pond in East Sandwich. 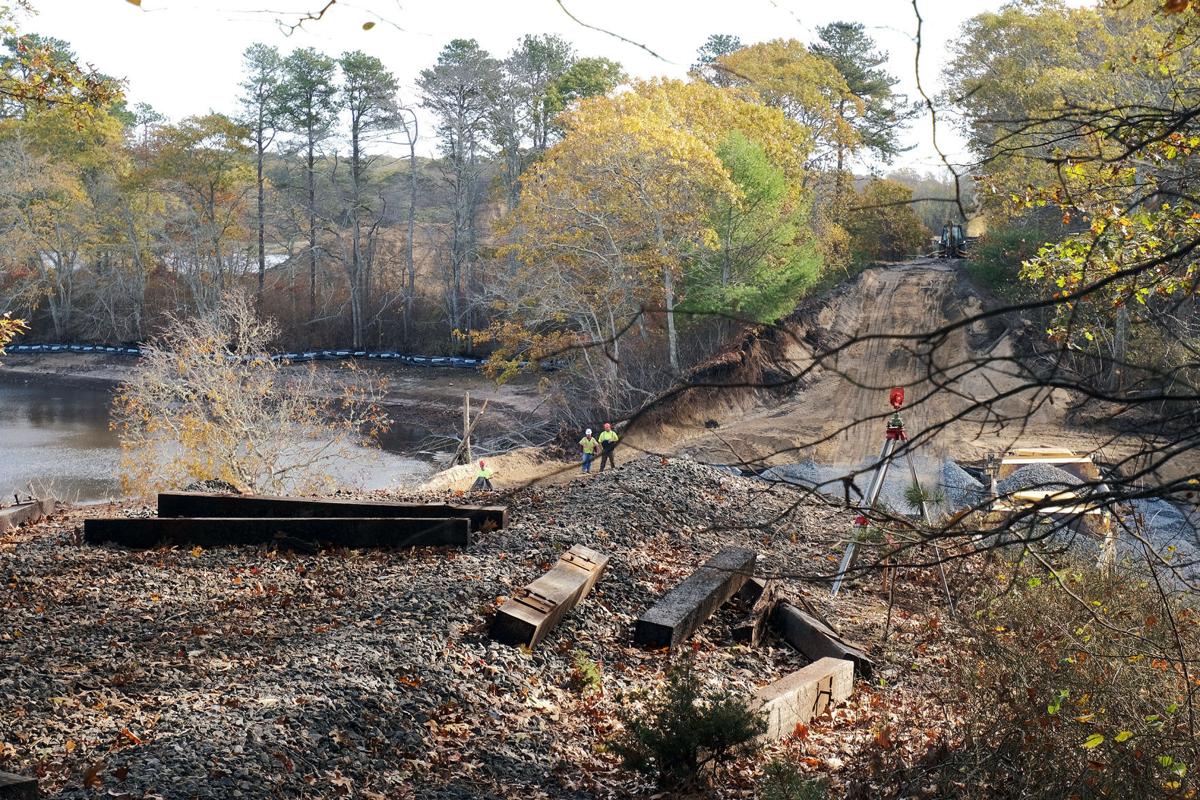 Work is ongoing to repair the collapsed embankment on the south side of Lily Pond. 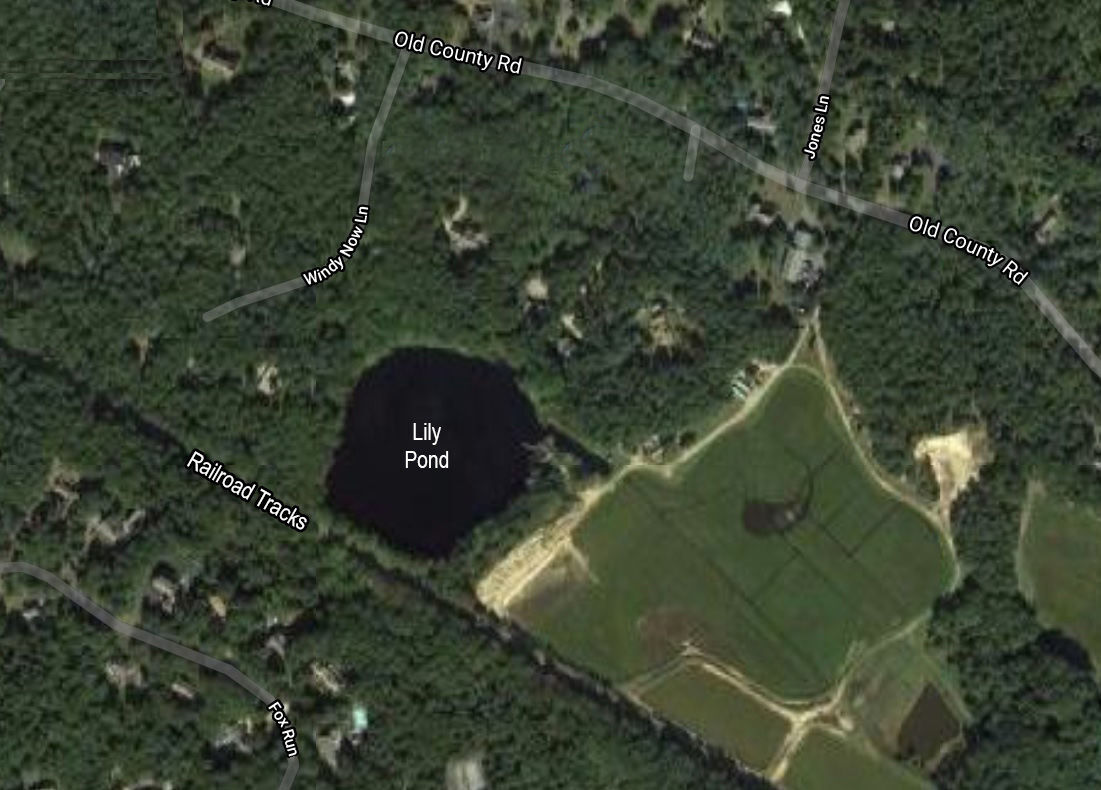 This Google Map shows the location of Lily Pond, just south of Old County Road, and north of the Fox Run neighborhood in East Sandwich.

Town and state officials are investigating a “catastrophic” collapse of a railroad embankment built decades ago beside a kettle pond off Old County Road in East Sandwich.

Workers from Mass Transit Rail, wearing hard hats and bright yellow vests, were busy clearing thousands of cubic yards of brush from the area and filling yawning gaps in the earth created by the collapse of hundreds of feet of embankment.

When the incident occurred early on the morning of October 27, neighbors reported hearing loud noises—the crash of trees and steel.

The cause is still unknown, according to a report from an engineering firm hired by state authorities to investigate the cause, the damage and the remedies.

Massachusetts Department of Transportation, Coastal Railroad and Department of Environmental Protection officials are overseeing the investigation.

“The collapse along the south side of Lily Pond covered a length of approximately 300 feet and was about 70 feet to 90 feet wide at the base. The estimated height of the embankment lost due to the collapse was about 30 feet. Approximately 15,000 cubic yards of material was displaced due to the failure,” wrote Paul J. Murphy, geotechnical manager for Jacobs Engineering Group.

Mr. Murphy noted in the report of his emergency visit to the site that the water level in the spring-fed kettle pond was six feet lower than normal due to this year’s severe drought and from the pumping of water from the pond to the adjacent cranberry bog.

“It is speculated that the pond level could have been even lower prior to the embankment collapse which resulted in the embankment material flowing into the pond, along with numerous trees being displaced and falling over,” the consultant wrote.

Kimberly Degutis of GZA Geoenvironmental Inc. was on hand during the virtual meeting to answer questions and describe the scene.

“The situation is still very fluid,” she said. “It was a catastrophic collapse—thousands of cubic yards of material moving at once.”

Ms. Degutis asked the conservation commission for leeway in the permitting process.

“No one is expected to fill in permits for an act of God,” Ms. Degutis said.

ConCom unanimously approved the emergency permits, which will allow the state workers to excavate and then replace the rocks, soil and other fill materials needed to stabilize the embankment before new tracks are laid.

Nevertheless, the state transit authorities will be expected to restore the natural area around the tracks, Mr. DeConto said.

He and members of the conservation commission are expected to visit the site next week.

“We will look at the damage to the pond and work out the cleanup details after the area has been stabilized,” Mr. DeConto said.

Restoration cannot come too soon for the neighbors, who are concerned about the health of the formerly pristine Lily Pond. The 10-acre, old-growth area is home to blue herons, otters, turtles and fish, neighbor David Sullivan said.

“There’s mud and an island of debris in the middle of the spring-fed pond right now,” Mr. Sullivan said. “We want ConCom to step up and make sure the pond is restored.”

ConCom To Issue Orders: DOT Must Clean Up Lily Pond

Sometime between now and next Wednesday, March 24 the Sandwich Conservation Commission will send unambiguous orders to the Massachusetts Depar…