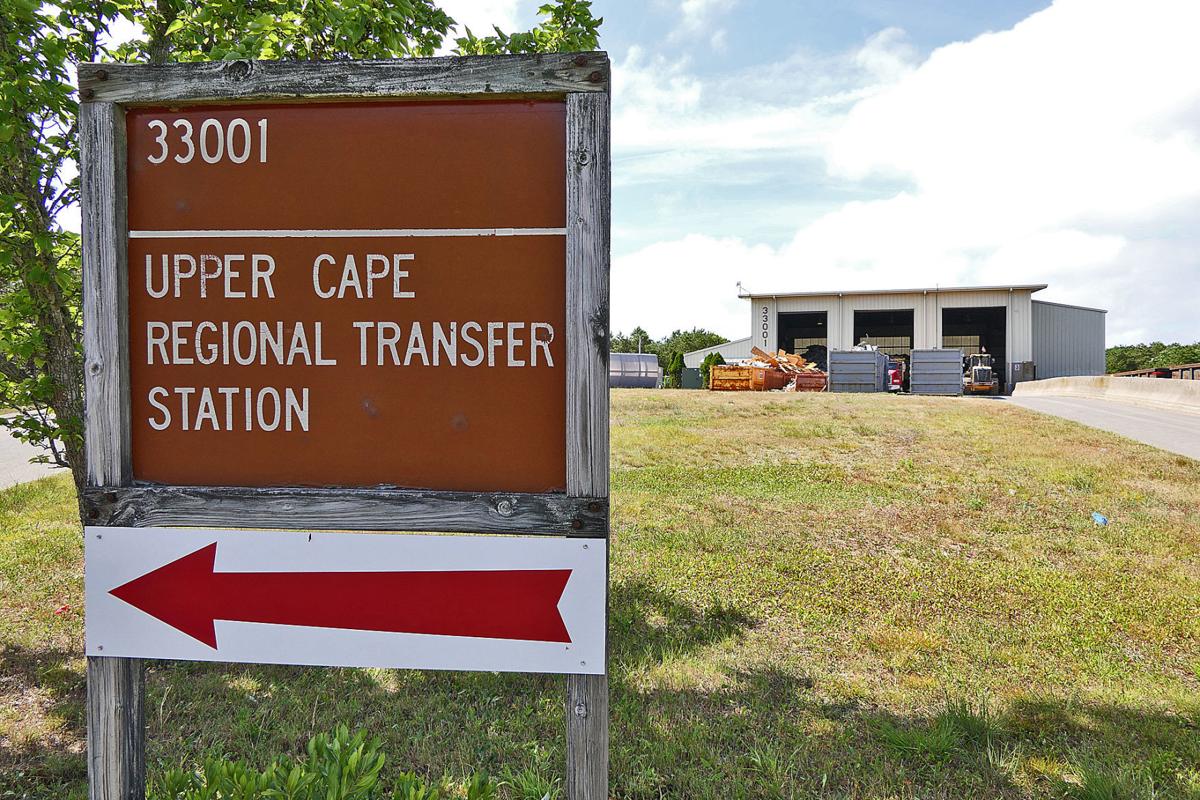 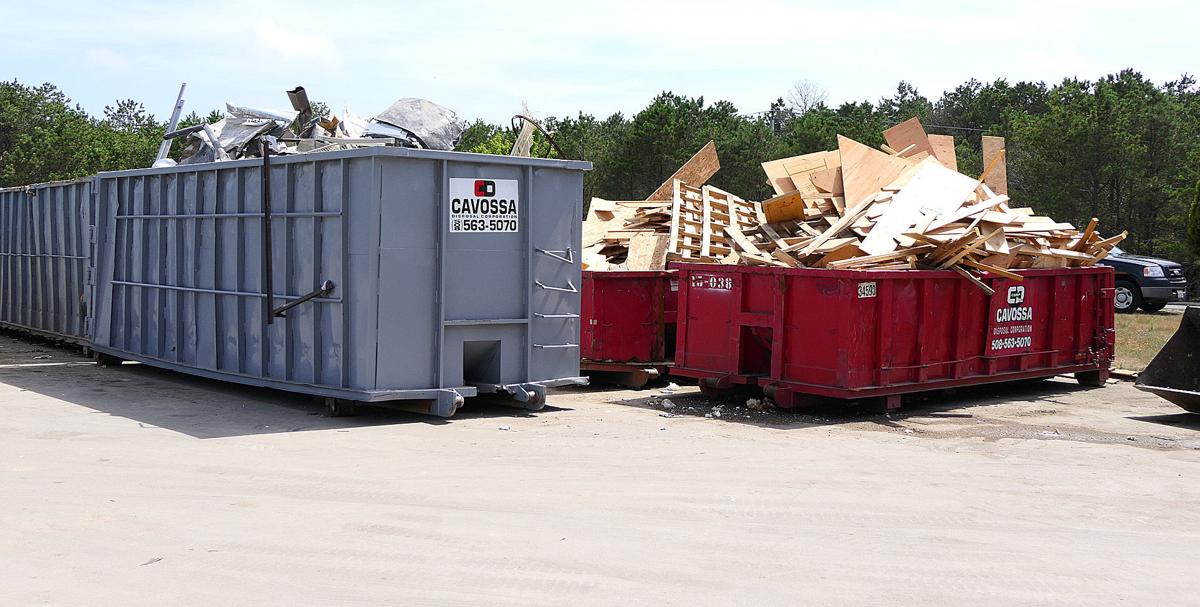 Scrap metal is separated from the wood in two different bins. 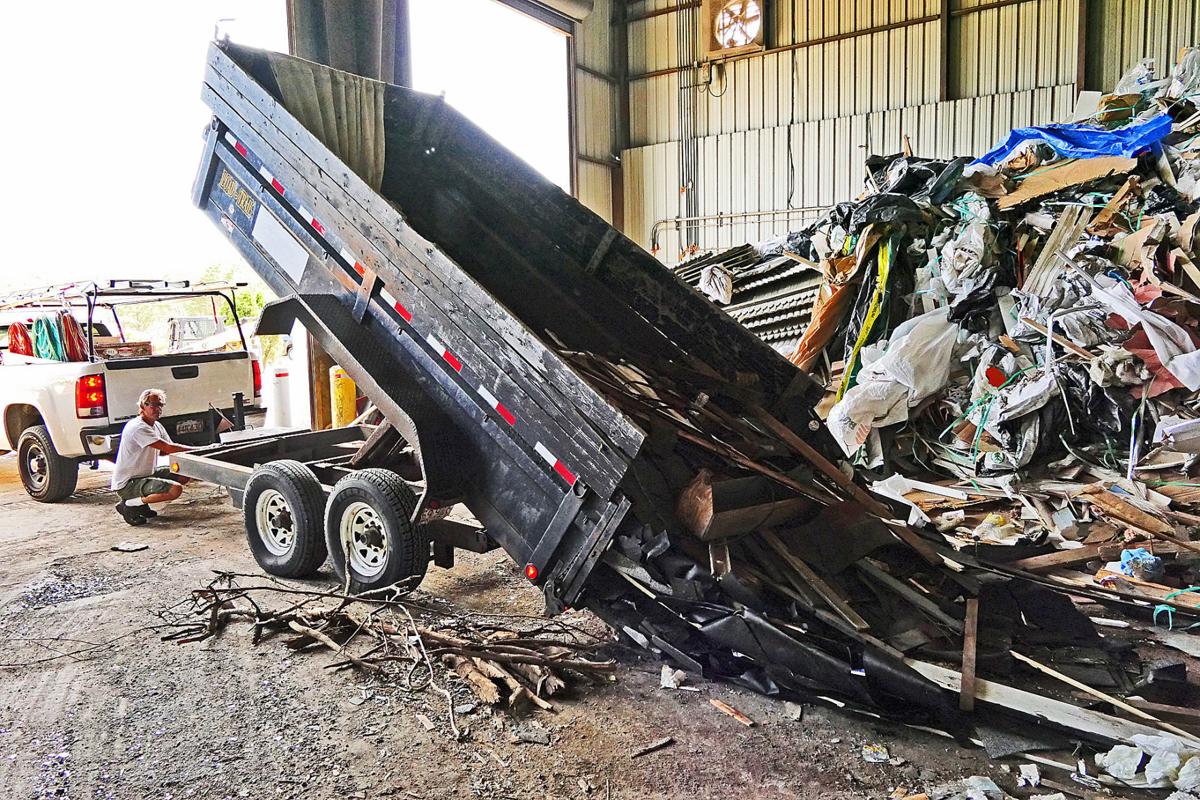 George Ryan of Ryan Holmes Contracting deposits a load of construction and demolition waste at the facility. 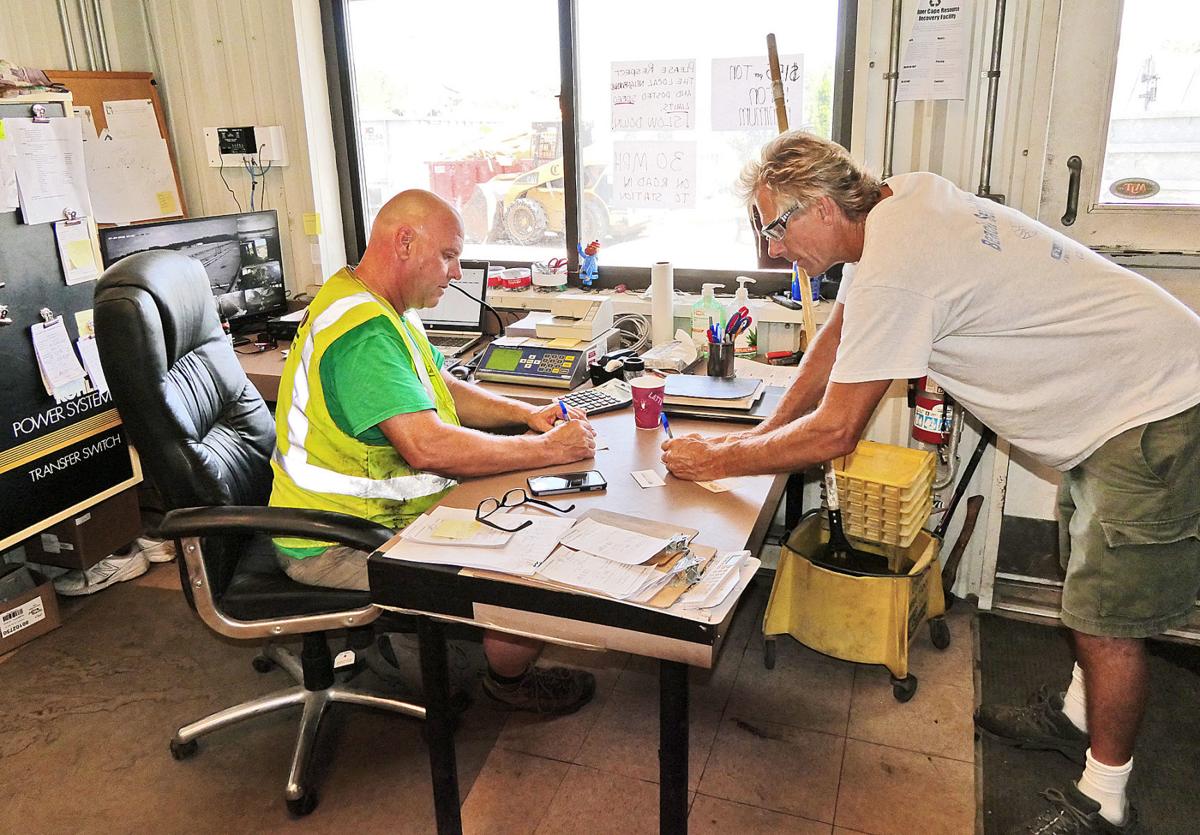 General manager Chris Rozanski assists driver George Ryan after he dropped off a load of construction and demolition waste at the resource recovery facility. Vehicles are weighed in upon arrival and again after depositing their load to configure payments. 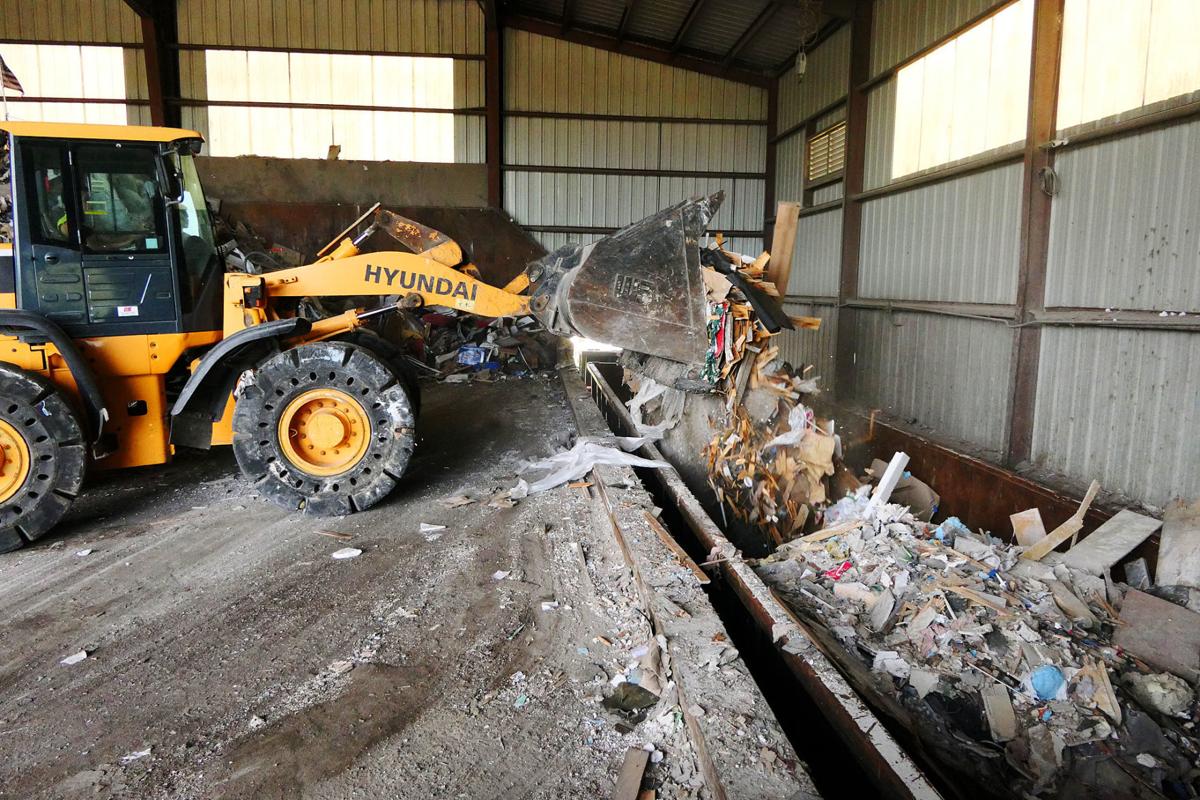 A front loader drops a load of construction and demolition waste into the railcar, from the tipping floor of the facility. 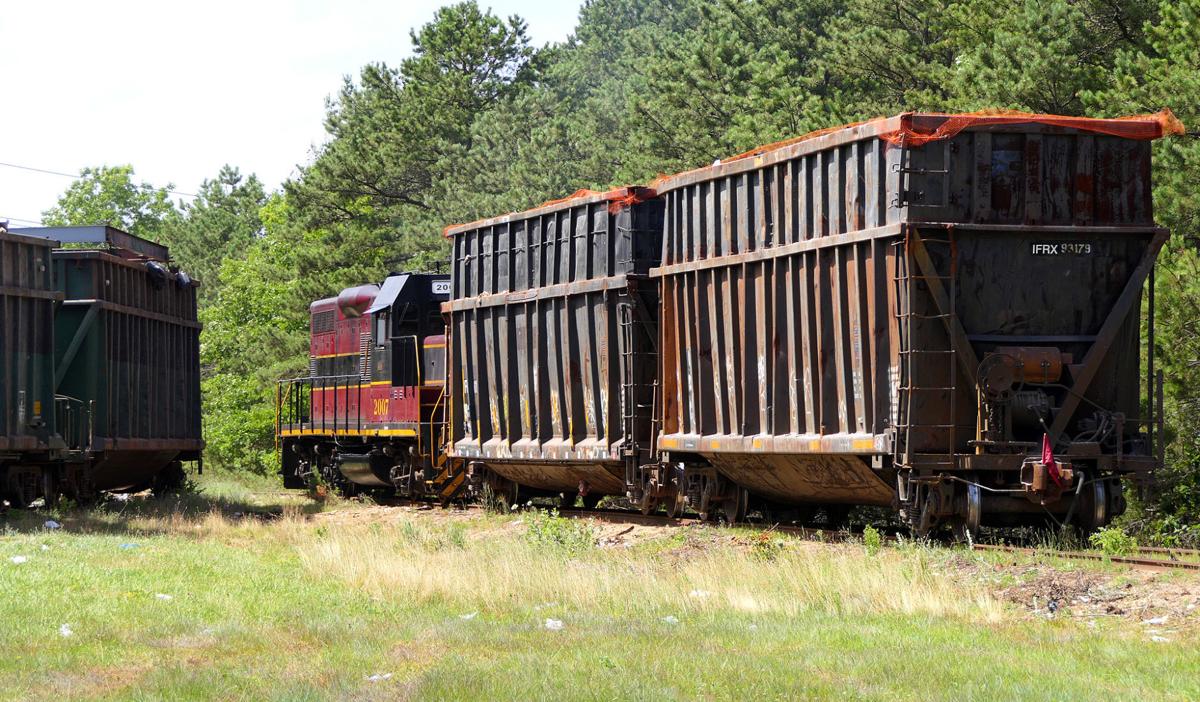 The train departs from the facility, pulling two railcars with orange netting covering the top to prevent debris from escaping.

Scrap metal is separated from the wood in two different bins.

George Ryan of Ryan Holmes Contracting deposits a load of construction and demolition waste at the facility.

General manager Chris Rozanski assists driver George Ryan after he dropped off a load of construction and demolition waste at the resource recovery facility. Vehicles are weighed in upon arrival and again after depositing their load to configure payments.

A front loader drops a load of construction and demolition waste into the railcar, from the tipping floor of the facility.

The train departs from the facility, pulling two railcars with orange netting covering the top to prevent debris from escaping.

At the Upper Cape Resource Recovery Facility on Joint Base Cape Cod, smoke billowed from the train as it revved up to leave, carrying with it about 80 to 100 tons of waste in its cars to destinations around New England.

A facility worker, standing at the front of the train, waved good-bye to general manager Chris Rozanski as the train departed from the station and picked up pace.

Located at the end of Kittridge Boulevard, the Upper Cape Resource Recovery Facility is owned by the four Upper Cape towns and managed by a representative board.

Carl F. Cavossa Jr., owner of Cavossa Disposal Corporation, was awarded a 4.5-year operating contract for the facility as of last September.

The departing rail car was filled to the brim with wood and lumber; concrete; roofing; and other construction, renovation and demolition waste. An orange netting covered the top of each car, preventing the material from escaping during its trip. The cars with metal lids carry solid waste.

The facility has three bays that lead to a tipping floor, which is level with the train’s rail cars just below, making it easier for the workers to load the material.

A mountain of debris towered overhead in the farthest corner of the facility. A toilet bowl, a Halloween mask, tarp, insulation, cardboard boxes, piled fencing, plastic wrap and a range of additional debris were sitting amid the pile of trash.

The steady sounds of machinery humming and the crunching of wood and glass echoed in the air.

Construction and landscaping trucks roll in and out during the day, dropping loads of material in the center of the tipping floor, where workers will hand-sort it.

A crew of up to eight workers maneuvered around the broken glass, exposed nails, waste spills and every other obstacle that lay in their path, all while unloading incoming trucks, hand-sorting material, and transporting it into the cars.

The workers used a front-end loader to extract the debris from the pile, with dust particles swelling in the air after each load was tossed.

Prior to the train departing for disposal sites, recyclable materials—such as plastic, cardboard, paper, metal, wood, Freon, rubber and gypsum—are sorted out.

Clean wood has the highest rate of recycled material, followed by wood, metal and then cardboard, Mr. Rozanski said.

A fleet of 20 rail cars cycle through each week, taking an entire day to load each one. The train departs from the station once or twice a week, Mr. Rozanski said.

The train then travels over the bridge to Middleborough, Attleboro, and Framingham, which is the last stop in Massachusetts. From there, it travels to New York, making dropoffs in Selkirk and Buffalo. Then, the train travels to Pennsylvania, leaving loads behind in New Castle and Lawrencetown.

The trip takes about seven days out and seven days back on average, Mr. Rozanski said.

Companies pay a rate of $155 per ton dropped off. Items such as tires, computers, televisions, mattresses, air conditioners, refrigerators, ovens and dishwashers cost $35 to drop off. Customers weigh in before entering the facility and then weigh out upon leaving.