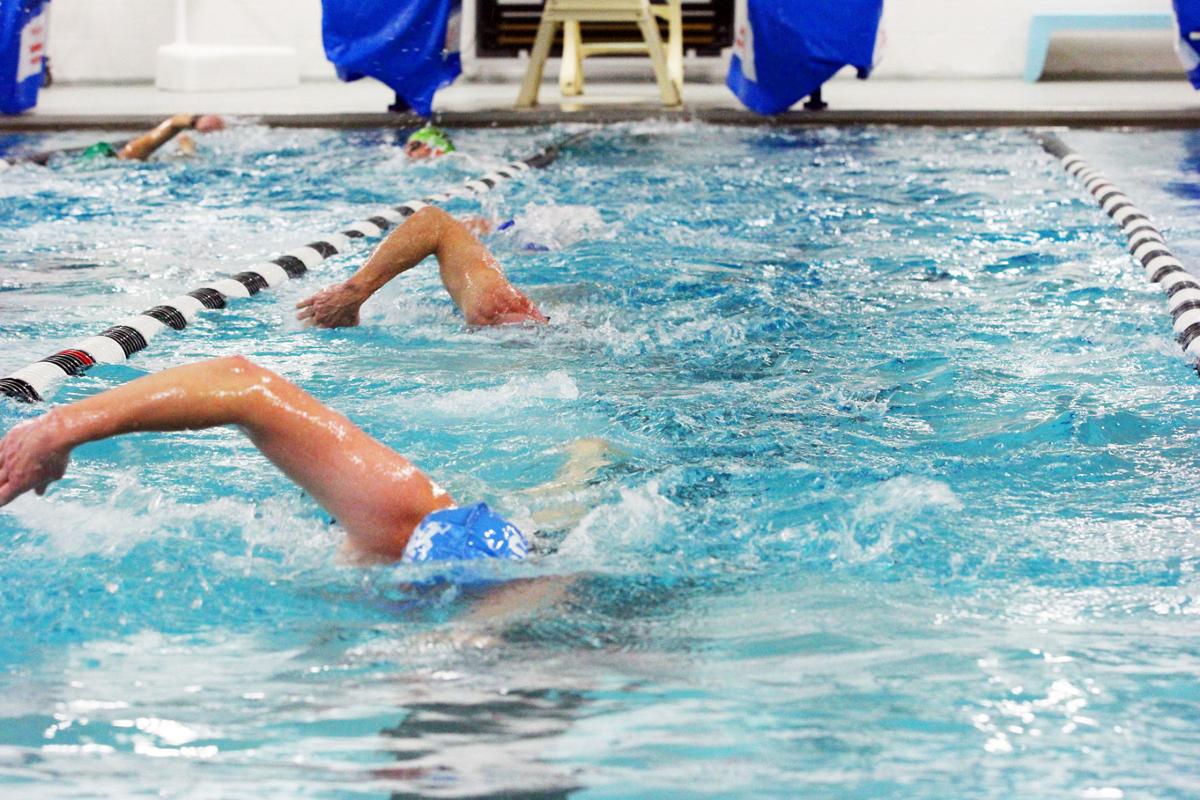 US Masters swimmers do laps in the Sandwich High School pool during the early morning. The pool is open to adult swimmers only three mornings a week, from 5:15 to 6:30. 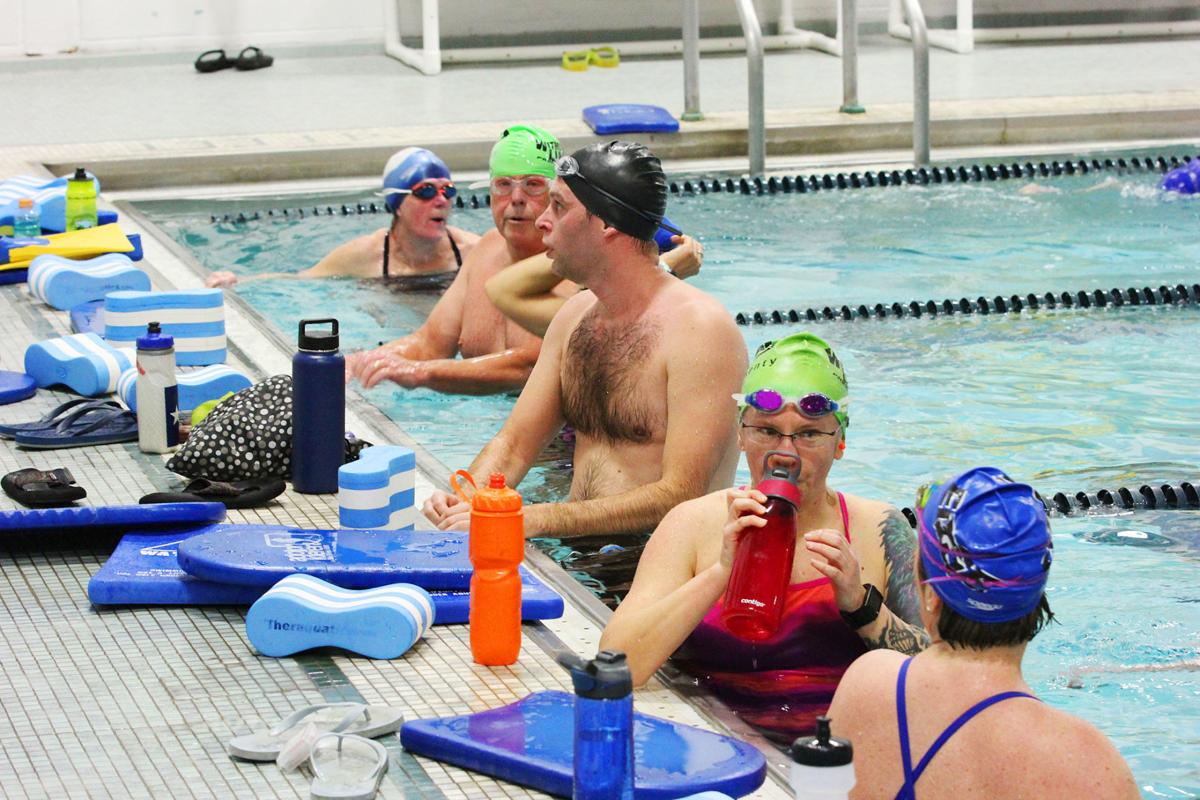 Swimmers take a break during the US Masters swim workout at the Sandwich High School pool. 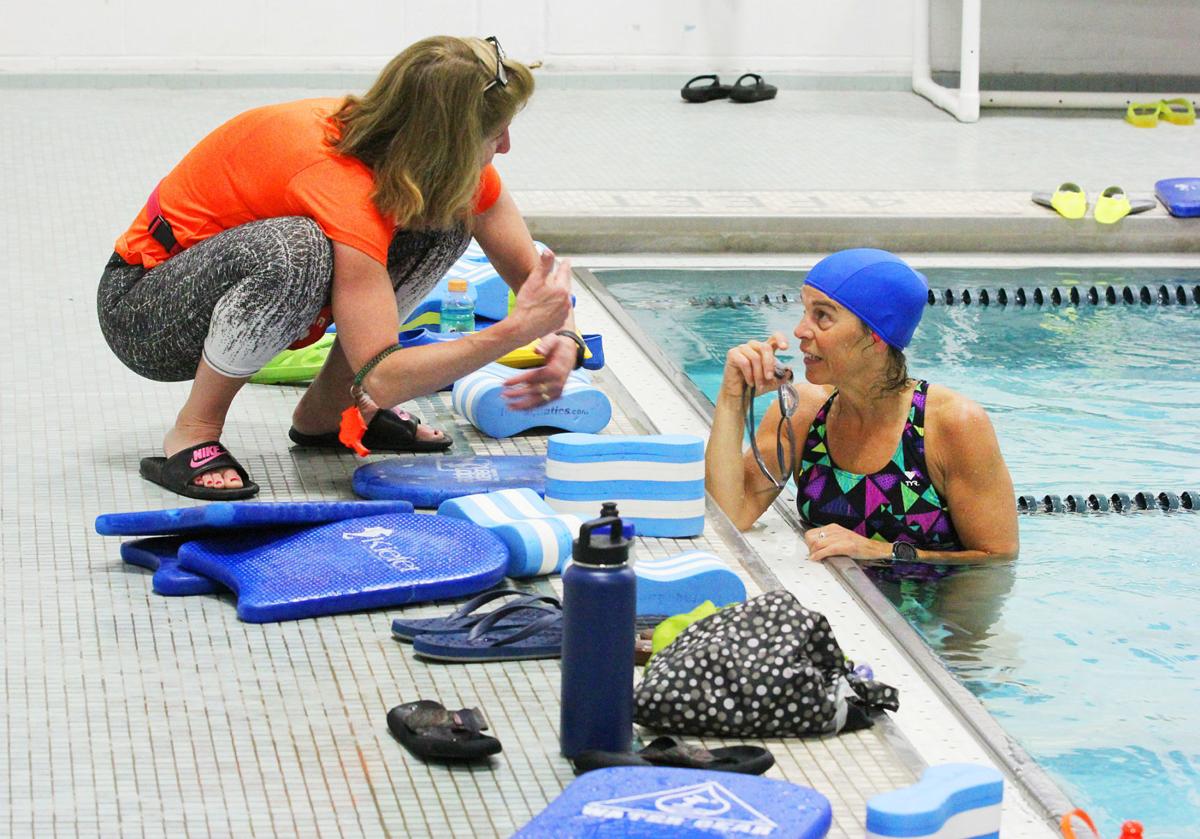 Swim coach Patricia Cundiff talks with Nelly Sheehan during the US Masters swim.

When Sandwich voters approved nearly a million dollars to repair the pool inside Sandwich High School back in 2013, most were under the impression that it would once again be a true community pool; a place where young children took swimming lessons, where high schoolers would compete on the school’s swim team or get exercise during the school day, and adults could swim laps during their lunch break.

Well, some of that has happened.

Swimming lessons are given, the Blue Knights swim team competes in the pool, and swimming is offered to high school and STEM students during the school day. The pool also provides practice space for the Cape Cod Firefish, which is a year-round competitive swim club for swimmers ages 6 to 18.

While the pool is available for adult swim, the opportunities are not the same as they used to be. Adult swimmers need to roll out of bed pretty early in the morning to get their laps in. There are no lunchtime or evening hours for adults. Rather, there are three early mornings set aside for adult swim: Tuesdays, Thursdays and Fridays from 5:15 AM to 6:30 AM.

Sandwich resident Patricia A. Cundiff, who offers swimming lessons through the Aquasafe Swim program and oversees operation of the pool, said that between 15 and 24 adults use the pool on those mornings.

Three nights a week, after teaching all afternoon and late into the evening, Ms. Cundiff sets her alarm clock for 4:10 AM in order to get to the Sandwich High School pool in time to teach her Tuesday, Thursday and Friday US Masters swim group the next morning.

“Masters” in this case refers to swimmers over 18 years old.

Twenty swimmers filled the pool just before dawn Thursday, January 23. Ms. Cundiff gave tips and encouragement to the swimmers as she moved back and forth along the edge of the pool.

Ms. Cundiff was particularly excited about swimmers who started almost as beginners and have rapidly progressed, including one woman who joined the Master’s swim group because she will compete in a triathlon and did not swim well.

“We do the best we can within the parameters we have,” Ms. Cundiff said of using the Sandwich High School pool.

The reason for the limited hours is that the district does not want adults in the pool while classes are in session or while students are using the facility.

“We can only use the pool for adults early in the morning before the high school students arrive due to shared locker room issues,” Ms. Cundiff said. “Our adults are out of the water by 6:30 AM and out of the building before 7 AM.”

The pool had been operating for years as a community facility, but in 2011, then-superintendent of schools Mary Ellen Johnson banned adults from the pool during weekdays. She said she did so after receiving complaints from some parents about adults changing in the locker rooms at the same time as their children. Concerns were also raised at the time about adults walking through the school to get to the pool during the school day.

The ban caused an outcry from the adults who had been using the pool for exercise.

In 2013, the pool was closed to everyone when a huge leak was discovered. Electrical and HVAC system repairs were also needed.

Funds to repair the pool were approved by Town Meeting voters in November of that year and the pool reopened in 2015, but initially it was just for student use while district officials figured out how to provide community access.

Part of the process involved finding an outside company to run a community program within the pool, since the school board decided it would not be fair or feasible to ask aquatics director Wendy Pierce to work the school day, as well as weekends and evenings.

Ms. Cundiff was the only person to submit a proposal to the board and the contract was awarded to her in February 2016. Her contract has been renewed every year since then, most recently having been renewed for three years this past April.

Despite the strides that have been made, shared access to the pool remains a hurdle that the district still has not entirely overcome.

One way that the district would be able to potentially open the pool up more for adult use would be if they were able to install an entryway vestibule at the rear entrance to the pool. In 2016, the district requested $25,000 worth of funding from the town’s Community Preservation Committee. The funding would not only pay for an entrance door, but also a check-in area and an improved parking lot. But the request was dropped when it became clear that the group would not approve its request.

The new entryway would have provided access to the pool while keeping members of the public out of the hallways during school hours.

Superintendent Pamela A. Gould said she is in favor of the entryway, but the funding is not there to build it.

She said the new entry is key to providing more public access because allowing adults to enter through the front doors and pass through the school’s hallways while classes were in session would put the district at risk of losing its accreditation through the New England Association of Schools and Colleges. The association has strict policies against allowing open public access to schools during the school day.

Another condition of the accreditation is that the locker rooms would have to have partitions to keep students separated from adults. Those partitions are also not in place.

Dr. Gould said the way around that issue has been to allow the early morning access.

While allowing the community to access the pool was always one of the goals when it came to fixing the school pool, school committee chairman Sean P. Rausch said that school safety and student access come first.

“I’ve always been in favor of the pool,” he said. “I believe that schools are not just schools, they’re community buildings.”

He said that he can understand that people may not be happy with how the public access has come about, but that certain factors have made granting that access difficult.

“People used to be able to go in all the time,” he said of the community pool.

The schools make extensive use of the facility, however. He said that classes and clubs in the STEM Academy are using it for robotics work and that there are also lifeguarding certification classes offered to students.

He remains an advocate for the community having access to the facility—so long as it does not conflict with student use of the pool and locker rooms.

“It is a community building, and we should have the community in the building as long as it makes sense,” he said. “However, our first priority is using all of our assets for education.”

I ask why not consider opening the pool more during the holiday period and also any day the schools are closed to facilitate those who may want to limber up in the water. It may be a while before any money is seen from the CPA is issued to make a separate entrance way