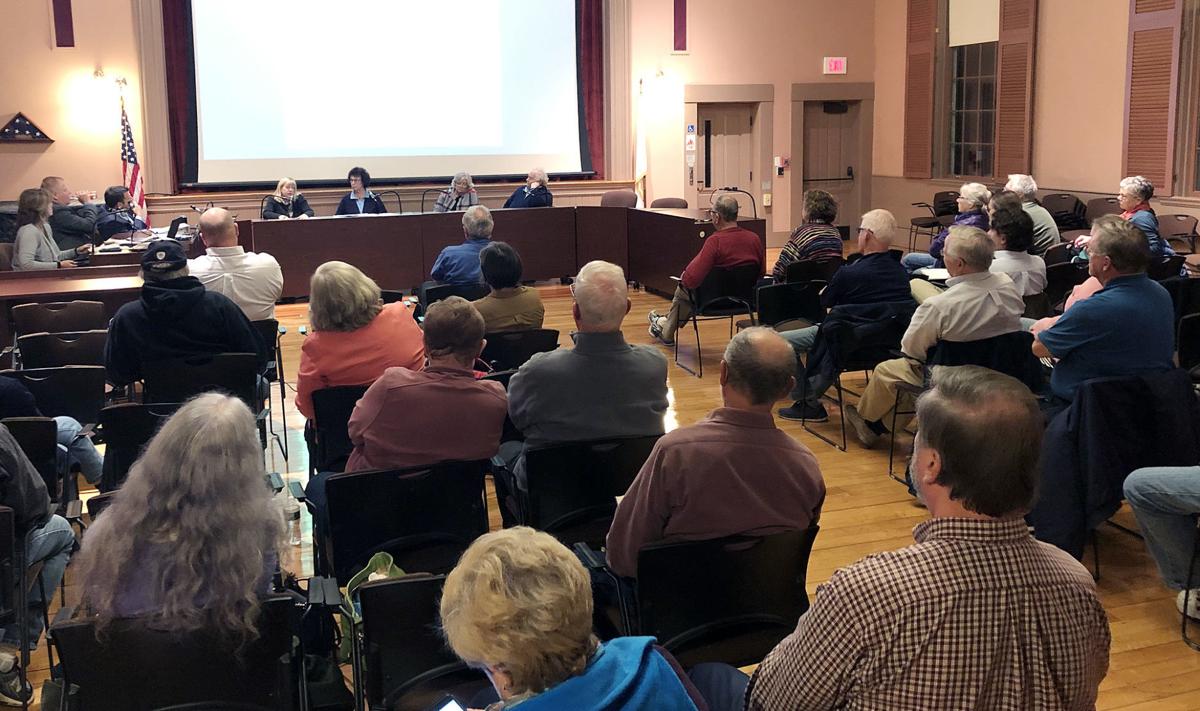 Residents listen to presentations detailing plans to renovate the Sandwich Public Library and build a new senior center. The projects, contained in Article 1 of the upcoming Town Meeting warrant, was the subject of a forum on the second floor of Town Hall this week. 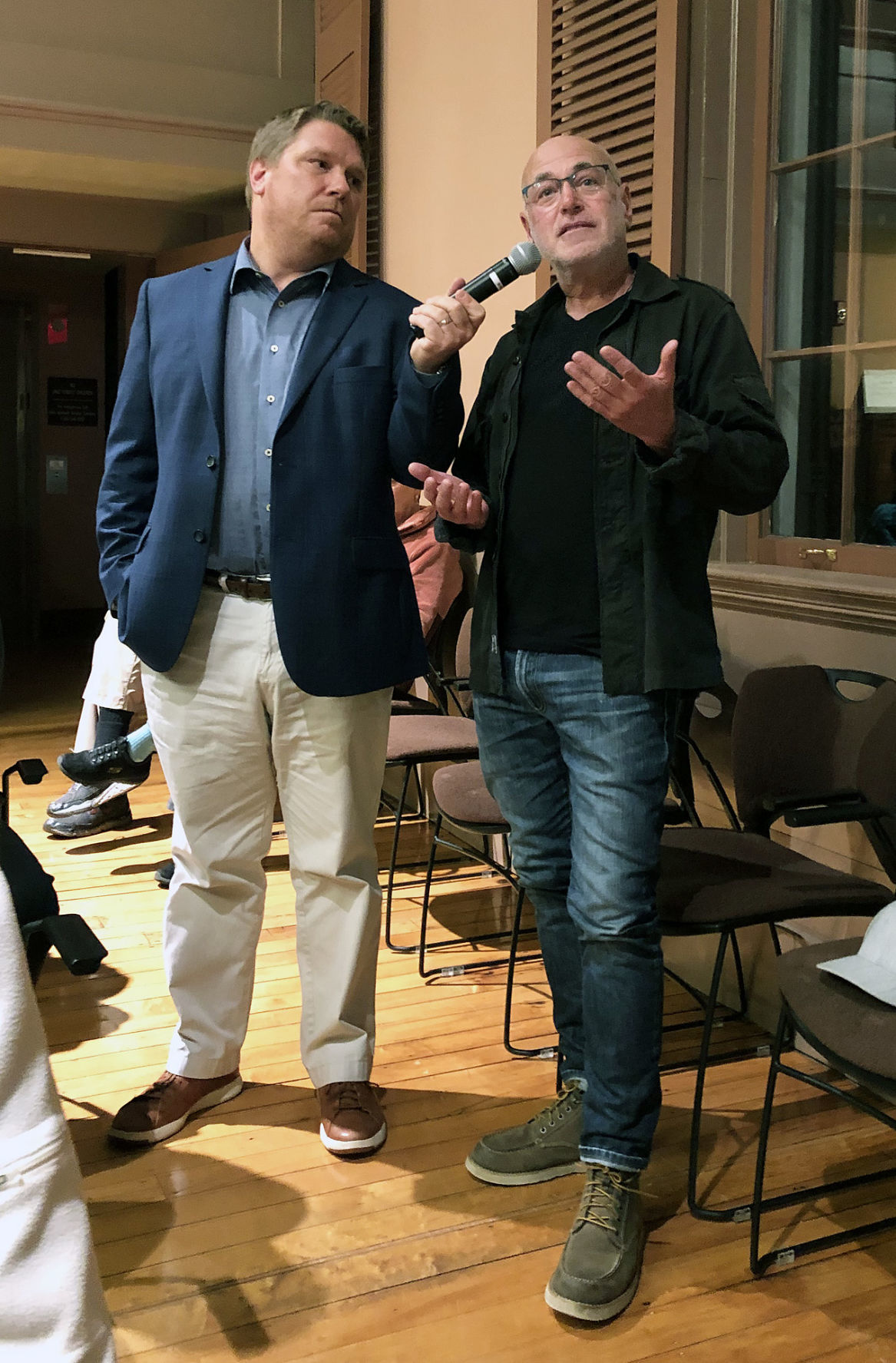 Jonathan Finn tells the crowd that the two projects will make Sandwich a better place to live as event emcee Greg Anderson holds the mic.

Residents listen to presentations detailing plans to renovate the Sandwich Public Library and build a new senior center. The projects, contained in Article 1 of the upcoming Town Meeting warrant, was the subject of a forum on the second floor of Town Hall this week.

Jonathan Finn tells the crowd that the two projects will make Sandwich a better place to live as event emcee Greg Anderson holds the mic.

A Town Meeting presentation—basically, a dress rehearsal for a scheduled October 28 Town Meeting—drew a crowd that filled up the town hall auditorium this week.

For more than an hour, the 60 or so attendees heard details and viewed artists’ renderings—projected on a big screen—of proposed renovations to the Main Street library and plans for a new senior center.

Both architectural projects will be contained in the first article of the meeting warrant. The combined cost, if taxpayers approve the article, will be $20 million.

“Don’t worry, we are going to shorten this presentation before Town Meeting,” Mr. Dunham said, eliciting a laugh from the audience.

The town manager then gave a brief explanation of how he and the selectmen would like to fund the project without raising taxes.

The town is proposing to float a bond for the costs—borrowing about $16.5 million for a new senior center—otherwise known as the Center For Active Living—and about $3.5 million for interior renovations to the existing Sandwich Public Library.

The loan would not be repaid by raising taxes, but rather from alternative sources that include annual payment-in-lieu-of-taxes (PILOT) funds from the power plant; tax revenue from short-term rentals; and proceeds from the sale of town buildings.

“Last spring we promised to bring this back to Town Meeting,” Mr. Dunham said. “Although there will be no debt exclusion, we still need a two-thirds majority vote because we have to borrow funds.”

He showed the crowd a colorful chart that demonstrated that as the increasing PILOT payments—and other revenues—are deposited into the town coffers over the next two decades, the debt would drop steadily.

Mr. Dunham also reiterated that once the library and senior center are completed, the town will have met almost all of its long-term capital goals.

After the presentation, emcee Greg Anderson made his way around the room with a microphone, so taxpayers could ask questions of the panel, which also included board of selectmen, library and senior center representatives.

Many of the taxpayers’ questions and comments came from supporters of one or both projects. There were naysayers, however, who traveled the familiar ground of questioning such a large expenditure.

One of them was Jane Logan of East Sandwich who said the power plant money should be spent, instead, on beefing up the fire department’s response time.

There were questions about why both projects are concentrated in one article and why the PILOT payments from the power plant would not be used, instead, to lower taxpayers’ property taxes.

Matthew D. Anderson, vice chairman of the finance committee, was also in the audience.

In answer to a question about why the finance committee recently voted overwhelmingly against Article 1, Mr. Anderson said he voted “no,” because he is concerned about upcoming wastewater expenditures.

“If we don’t have a project in place, we’ll have a $30 million [cost] looming over our heads,” he said, referring to the estimated costs for the first phase of a multi-year water cleanup program.

Mr. Dunham said monies coming into a special Water Infrastructure Investment Fund, which was approved at Town Meeting and a ballot vote, will cover those costs. Another special fund has also been established for water and wastewater expenses, the town manager said.

The finance committee, at its meeting on October 1, had asked some of the same questions that came up at Tuesday’s dress rehearsal—why bundle the two projects, and why not give the PILOT payments back to the taxpayers?

Mr. Dunham answered that the town can get a better borrowing rate if the two projects are bundled. He also said the selectmen had spent many hours during capital spending public forums in 2016 and 2017 discussing how to raise funds for such large projects without raising taxes.

At the time, the finance committee was among the boosters of alternative financing for big town capital projects, Mr. Dunham has said.

If the taxpayers reject the library and senior center proposals at Town Meeting, the town would have to try, in the future, to raise the money through a Proposition 2½ debt exclusion.

That process would mean the debt would be repaid through a temporary property tax increase and would require a two-thirds majority vote at Town Meeting and a ballot vote, Mr. Dunham has said.

The use of the power plant money, rooms tax funds and money from the sale of town buildings would also require a two-thirds majority vote at Town Meeting, but would not require a separate ballot vote.

The voters have already approved the sale of the former Henry T. Wing School, the Town Hall Annex on Main Street, and the town office building at 16 Jan Sebastian Drive. The taxpayers will be asked at the upcoming Special Town Meeting to approve the sale of the Forestdale Fire Station on Route 130.

If the PILOT payments were returned to taxpayers, it would only amount to about $125 a year, Mr. Dunham said.

One audience member broke it down even further.

“Having a gym like this [a large two-story gym and walking track, which would be attached to the senior center and available to the community] that the youth can use after school would be incredible,” said Kevin R. Sareault, co-chairman of the bikeway and pedestrian committee whose children participate in school sports.

“Resources like this will get them active in the community, and it will only cost me $10 a month,” Mr. Sareault said.

“I never hear anybody talk about how all these things would make my home and community more valuable,” Mr. Finn said. “A tax check might be nice for a minute, but [the library and senior center projects] will make this a better place to live,” for many, many years.