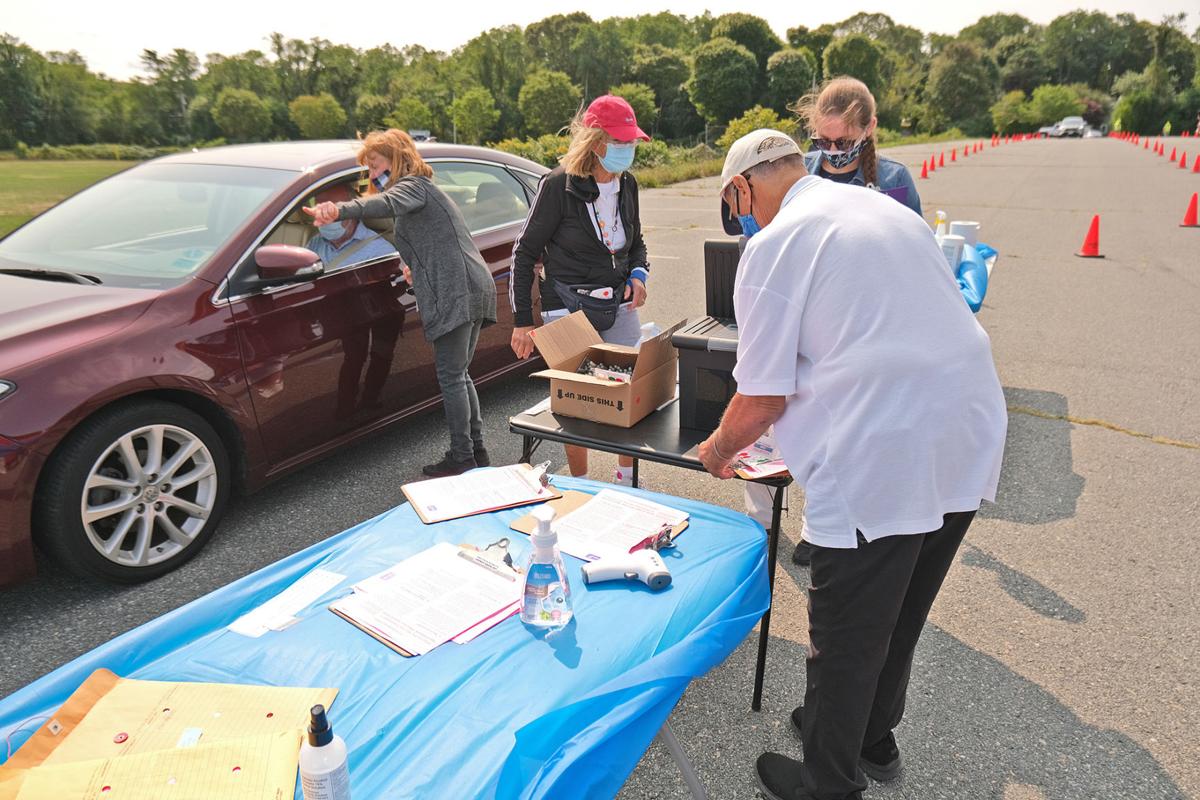 A participant in Wednesday’s drive-thru flu clinic behind the former Henry T. Wing School gets instructions from Penny Maddy of the Cape Cod Medical Reserve Corp, as Lydia Kotak, Stacy Burgess and Chuck Kotak organize paperwork at the registration table. Ms. Burgess is an administrator for Sandwich Public Health Nursing. The others are with Cape Cod Medical Reserve Corps. 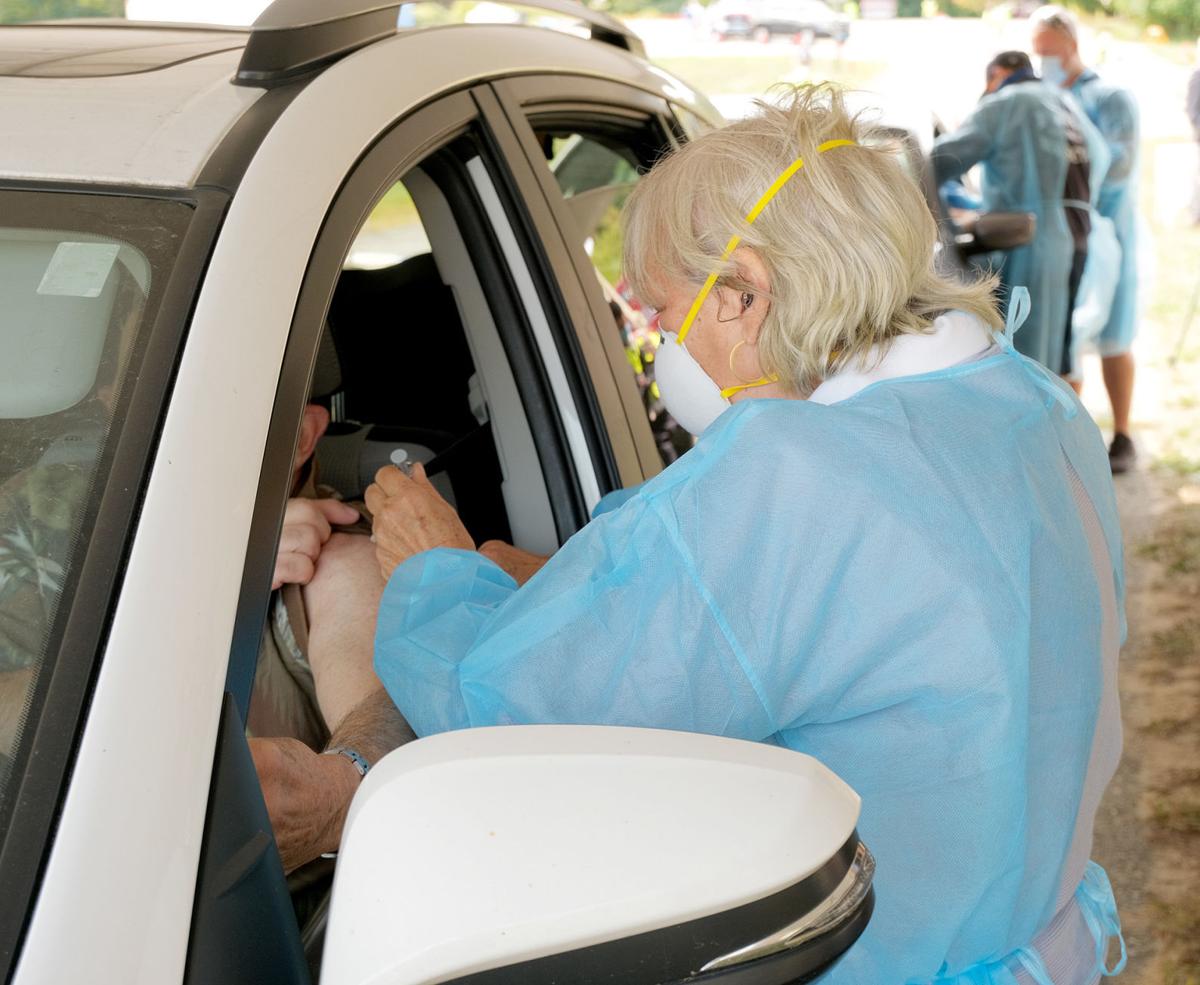 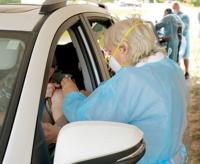 Marthe Gold administers a flu shot to a client. 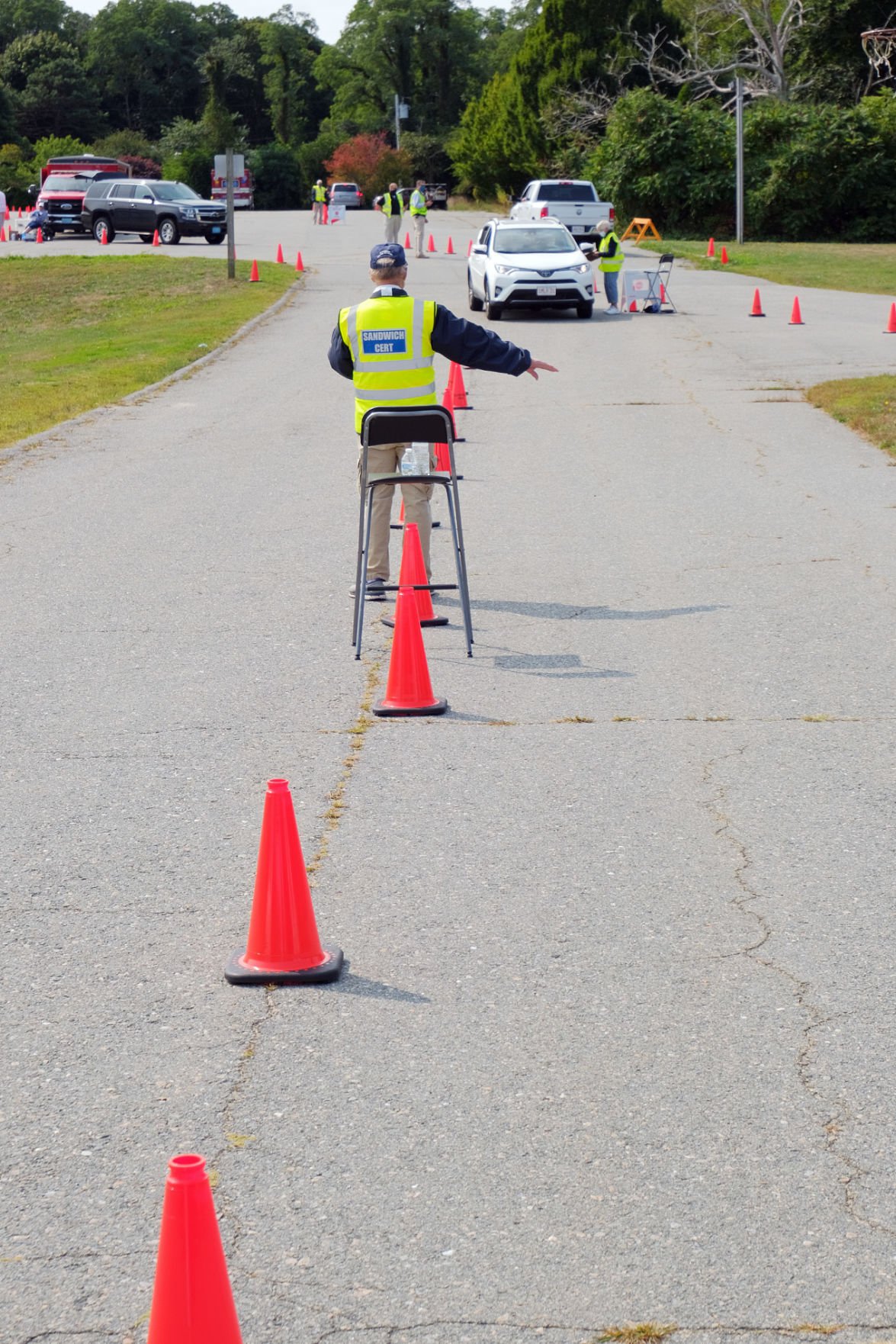 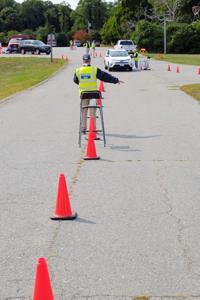 The operation was used to distribute flu shots and to test the possibility of hosting a COVID-19 vaccine drive-thru in the future.

A participant in Wednesday’s drive-thru flu clinic behind the former Henry T. Wing School gets instructions from Penny Maddy of the Cape Cod Medical Reserve Corp, as Lydia Kotak, Stacy Burgess and Chuck Kotak organize paperwork at the registration table. Ms. Burgess is an administrator for Sandwich Public Health Nursing. The others are with Cape Cod Medical Reserve Corps.

Marthe Gold administers a flu shot to a client.

The operation was used to distribute flu shots and to test the possibility of hosting a COVID-19 vaccine drive-thru in the future.

Except for a flashing police cruiser parked on Route 130 and a brightly vested volunteer seated in the former Wing School driveway, there was little evidence that anything unusual was going on Wednesday, September 16 at the old school building.

But, in fact, medical workers, emergency responders, town officials and volunteers were busily at work in the school’s bus loop dispensing hundreds of flu vaccines to people in their cars, trucks and vans. The four-hour event on Wednesday was well attended—a total of 249 flu shots were given—but it was carefully orchestrated and unhurried.

“It was a piece of cake,” said Sandwich resident Ruth-Anne O’Gorman, who rode through the tented inoculation area and received her shot just before noon. “I thought there would be a long line, but we just drove in and drove out.”

The secret to avoiding traffic tie-ups is preregistration and assigned times for each person receiving their dose of vaccine, Sandwich Public Health Nurse Joanne Geake said.

“We had everybody preregister and gave out appointments at assigned 15-minute intervals. It is well-organized, and the people here really know what they’re doing,” he said.

Here is how Wednesday’s drive-thru clinic worked: Cars and small trucks entered through the parking lot on the east side of the Wing School. The people in cars were checked off against the master list by volunteers wearing masks and reflective vests.

Drivers—who were also required to be masked—were instructed to follow driveways marked with bright-orange cones to a tented area that housed paramedics and other medical personnel armed with syringes of vaccine.

The medical personnel leaned into each car, asked a couple of questions—such as whether the drivers or passengers had been sick lately, and whether they were taking blood thinners—quickly delivered the inoculations and then patched up the patients’ arms with an adhesive bandage.

The inoculated people then drove back to the parking lot where another volunteer would ask how they were doing. If they said they were okay and did not seem disorientated, the residents could drive away.

By the end of the day no adverse reactions had been reported, according to Health Director David B. Mason, one of many health and safety officials who were at the site Wednesday morning.

Mr. Mason said Sandwich held drive-thru clinics at Corpus Christi Church from 2009 to 2012, but this year’s was the first at the Wing School.

Chief Burke said he was especially interested in how smoothly the Wing School operation was running because the town would like to use the site for COVID-19 vaccine distribution when a vaccine becomes available.

“This has been going good so far. We have 35 volunteers, 16 shot-givers, four paramedics and other Sandwich public safety and health staff here today,” he said.

The volunteers were from Sandwich Community Emergency Response Team and from the Cape Cod Medical Reserve Corps, a national network of volunteers organized locally to help communities in their public health efforts, according to the corps’s website.

“It went really well,” Ms. Geake said on Thursday. “We could have handled three times the amount of patients and done it well—which is good to know if we’re going to use that site for COVID-19 vaccine.”

Another drive-thru clinic will be held on Wednesday, October 7, at the school—33 Water Street—from 9 AM to 1 PM. Again, inoculations will be by appointment only.

Most insurances will cover the flu shot.