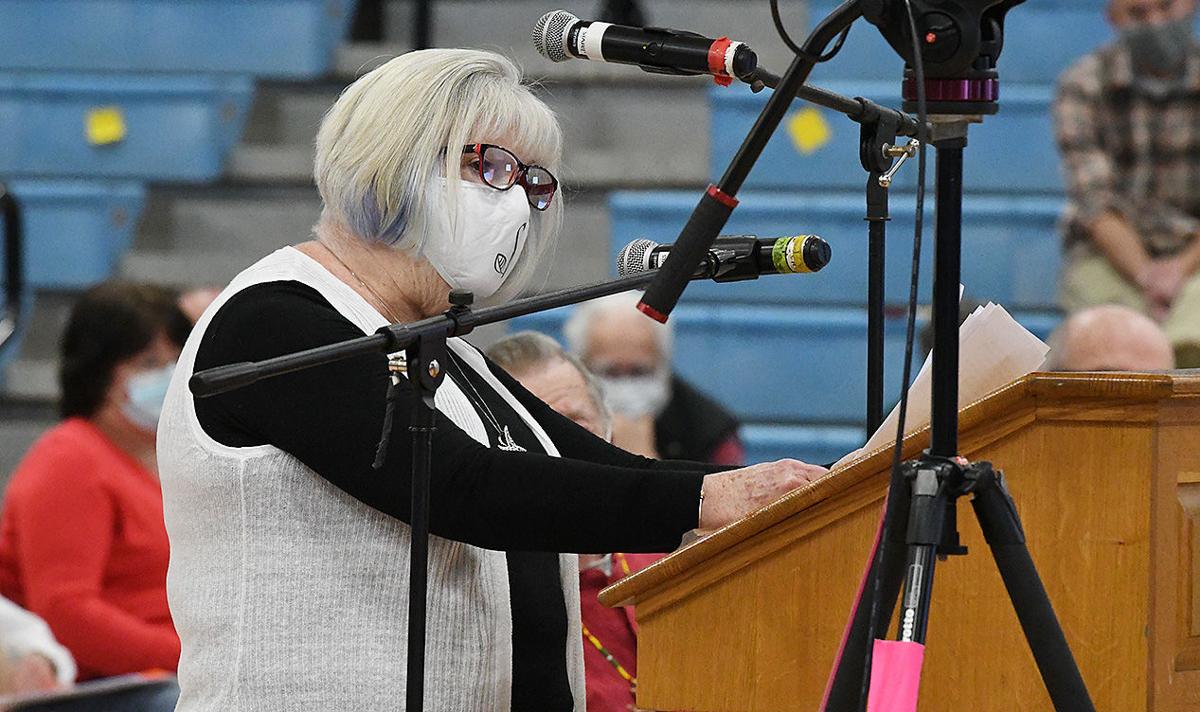 Mary Cote urges Sandwich Town Meeting to support the article proposing a ban on the retail sale of water in single-use plastic bottles in town. 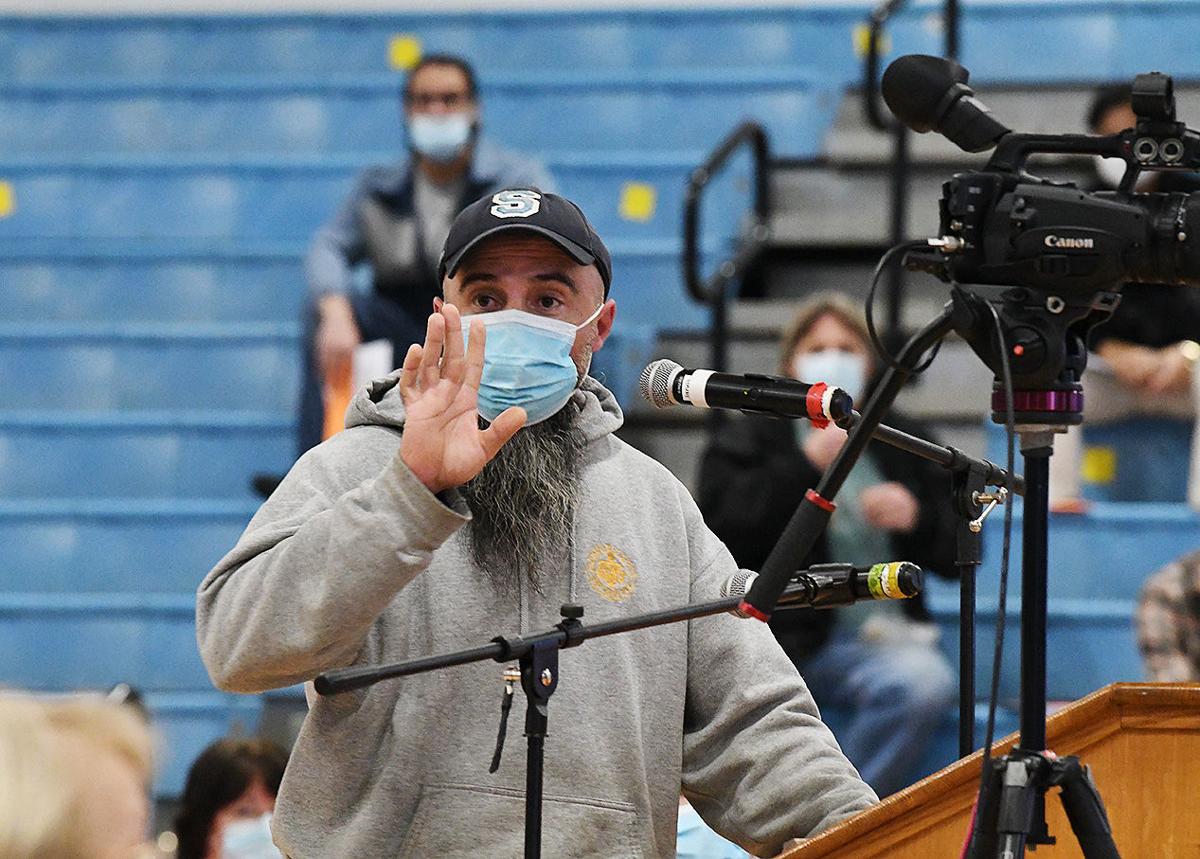 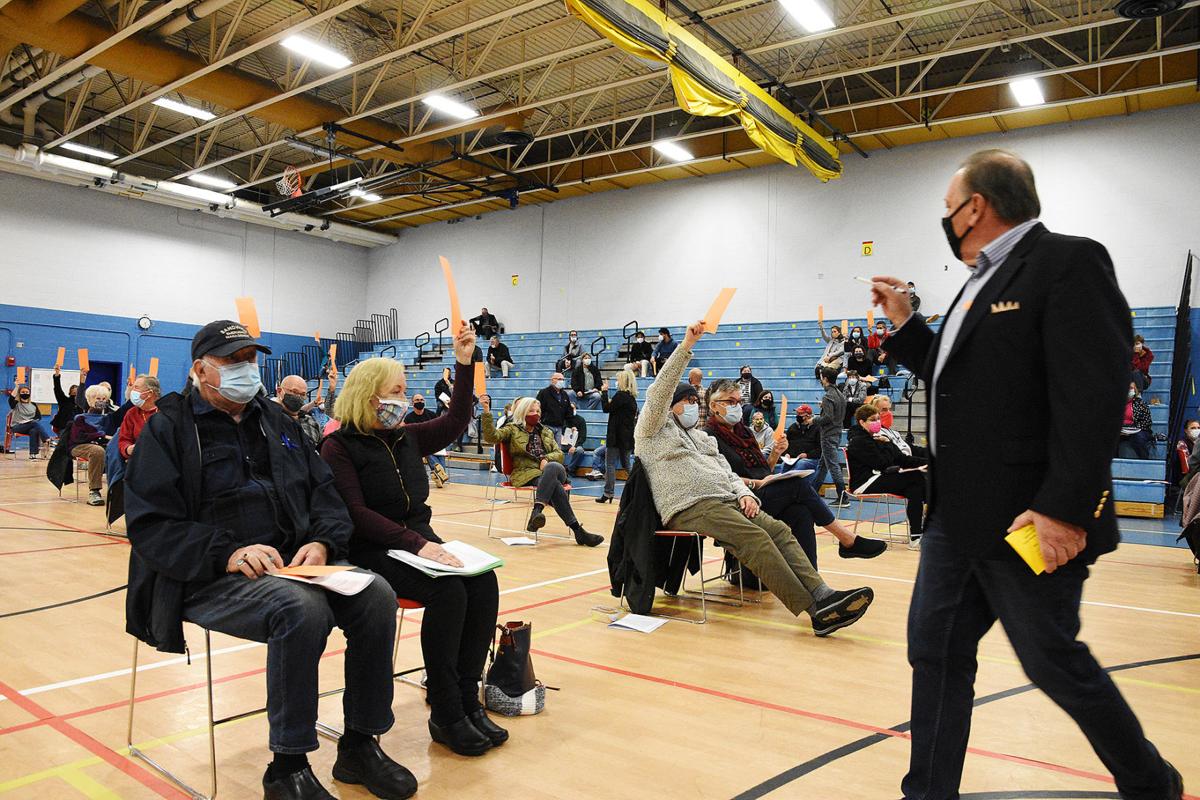 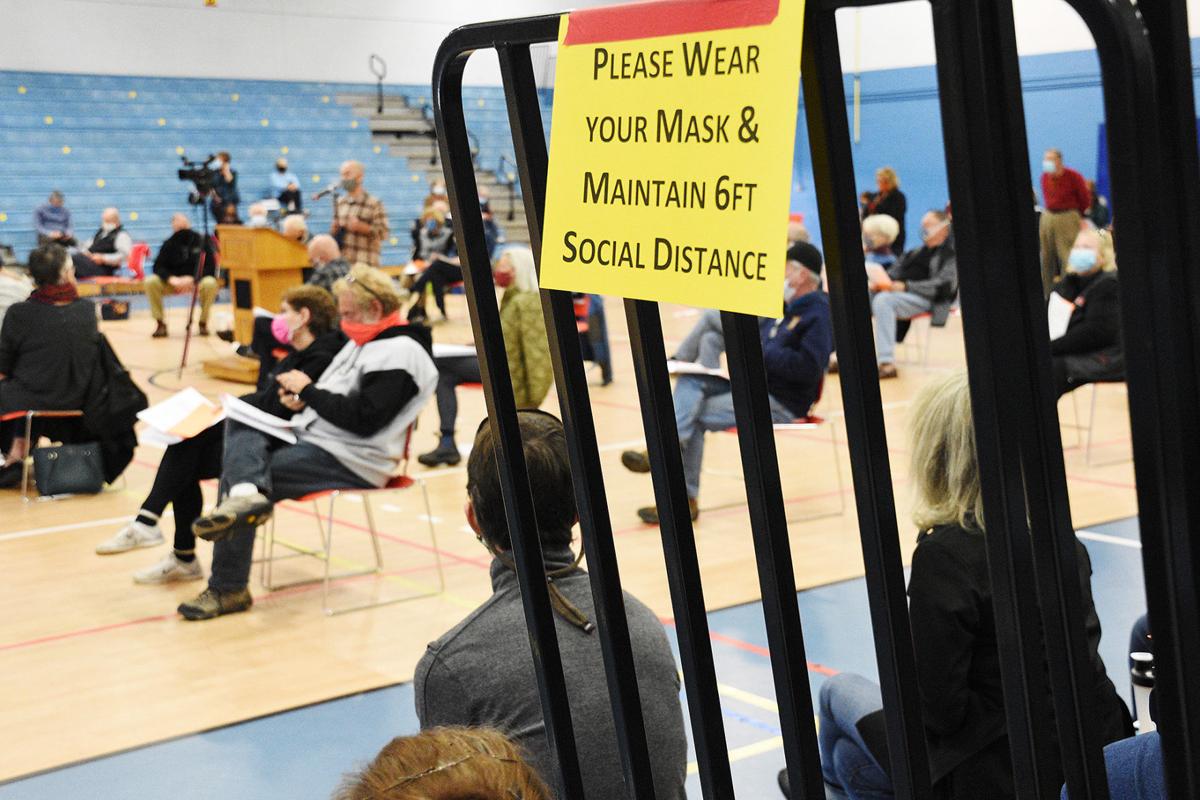 A sign in the high school gym reminds voters of the new rules at Town Meeting.

Mary Cote urges Sandwich Town Meeting to support the article proposing a ban on the retail sale of water in single-use plastic bottles in town.

A sign in the high school gym reminds voters of the new rules at Town Meeting.

Environmentalists seeking support for cleaner air and water at last Saturday’s Special Town Meeting say they will not be stopped by a vote to put off their requests.

“I am not discouraged,” said Mary Cote, the Sandwich representative for Sustainable Practices, the group sponsoring a Cape-wide effort to ban the sale of single-use plastic water bottles. “It will not stop me from bringing this forward at the next Town Meeting.”

Ms. Cote was one of several speakers who passionately presented their argument that banning the commercial sale of bottled water is a first step in battling the glut of plastic that is polluting oceans and killing wildlife.

Only 9 percent of the world’s plastic is actually recycled, Ms. Cote told the audience of 147 masked—and socially distanced—people gathered at Sandwich High School for the Town Meeting.

“Considering the lifecycle of plastic from production to consumption to waste, we must ask ourselves if the magnitude of the cost to human and environmental health is compensated by the convenience of a plastic water bottle,” she said. “Did you know that it takes three times the amount of water that the bottle will hold to make one bottle of water?”

Many other residents and nonresidents supported Ms. Cote’s argument that now is the time to begin reducing dependence upon bottled water.

Among the young supporters of the commercial ban was Jacob Swensen, the former Sandwich High School class president who last year was a spokesman for a successful campaign for a municipal ban on single-use bottles.

That ban prohibits the town from purchasing or selling beverages in small plastic bottles.

She added that seven other Cape towns—Falmouth, Brewster, Orleans, Eastham, Wellfleet, Provincetown and Harwich—have banned commercial sales of small bottles of water. She implored Sandwich to do the same.

But Robert E. King, owner of Cafe Chew, said that although he, too, is in favor of getting rid of plastic bottles, now is not the time for such a measure.

He said the beverage industry is only beginning to offer alternative containers for drinks—such as cans, glass and boxes—but they are not offering these on a mass scale or at reasonable prices to restaurateurs.

“The industry is not there yet,” he said.

Selectman David J. Sampson, who said he was speaking on behalf of the town’s restaurants and other businesses, agreed with Mr. King that now is a bad time to create further financial hardships for business owners already suffering from the fallout of the coronavirus.

But he also said he supported the ban in principle.

The discussion continued for almost an hour.

A few speakers, including Mark Custodio, said Sandwich should not be swayed by what other Cape towns are doing. He also questioned the environmental impact arguments.

“How much more do you want us to do? We are the cleanest place on the planet,” Mr. Custodio said.

After a confusing series of votes to call the question and then vote on the proposed ban itself, a majority of taxpayers in the gymnasium held up their orange voting cards in favor of postponing the bottle ban indefinitely.

Taxpayers also postponed indefinitely a separate citizens petition seeking to have the town adopt a policy of net-zero greenhouse emissions.

As with the Annual Town Meeting in June, attendees were spread out in properly distanced seating areas and were required to wear masks. After each person stepped up to a microphone to speak about warrant items, the mic was disinfected by a public safety worker.

Warrant items ranging from updating the town’s long-range plan to a zoning change allowing municipal buildings to exceed 35 feet in height, passed in about 15 minutes. Fund transfers to allow the purchase of new equipment and spruce up school athletic fields also took only minutes.

Ms. Cote said in an email on Wednesday that she will keep on fighting to clean up the Cape.

“The article was postponed indefinitely, not voted down. In my opinion, that means the voters know that this is the right thing to do, but they are not yet ready to make a change,” she said. “Our goal at Sustainable Practices is to continue to do more education, and always put human and environmental health before convenience or profit.’’