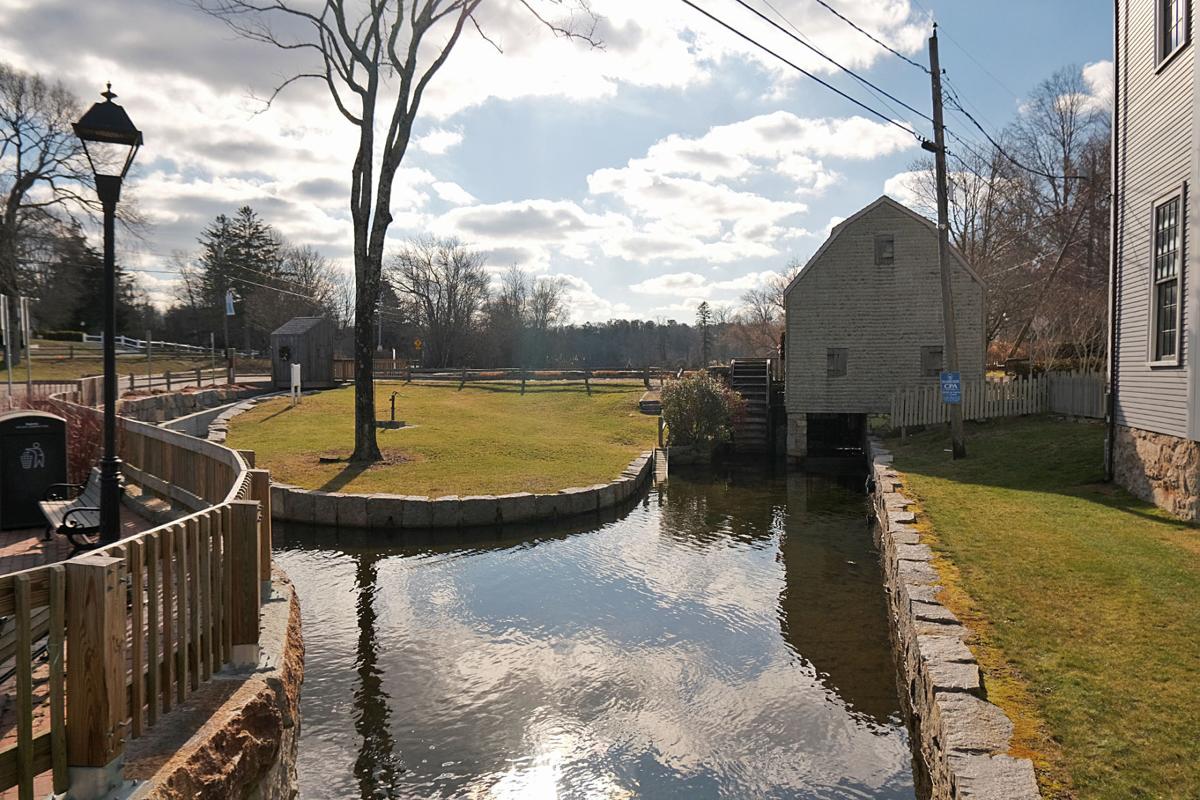 A public art project will be located on the lawn next to the Dexter Grist Mill in Sandwich Village. 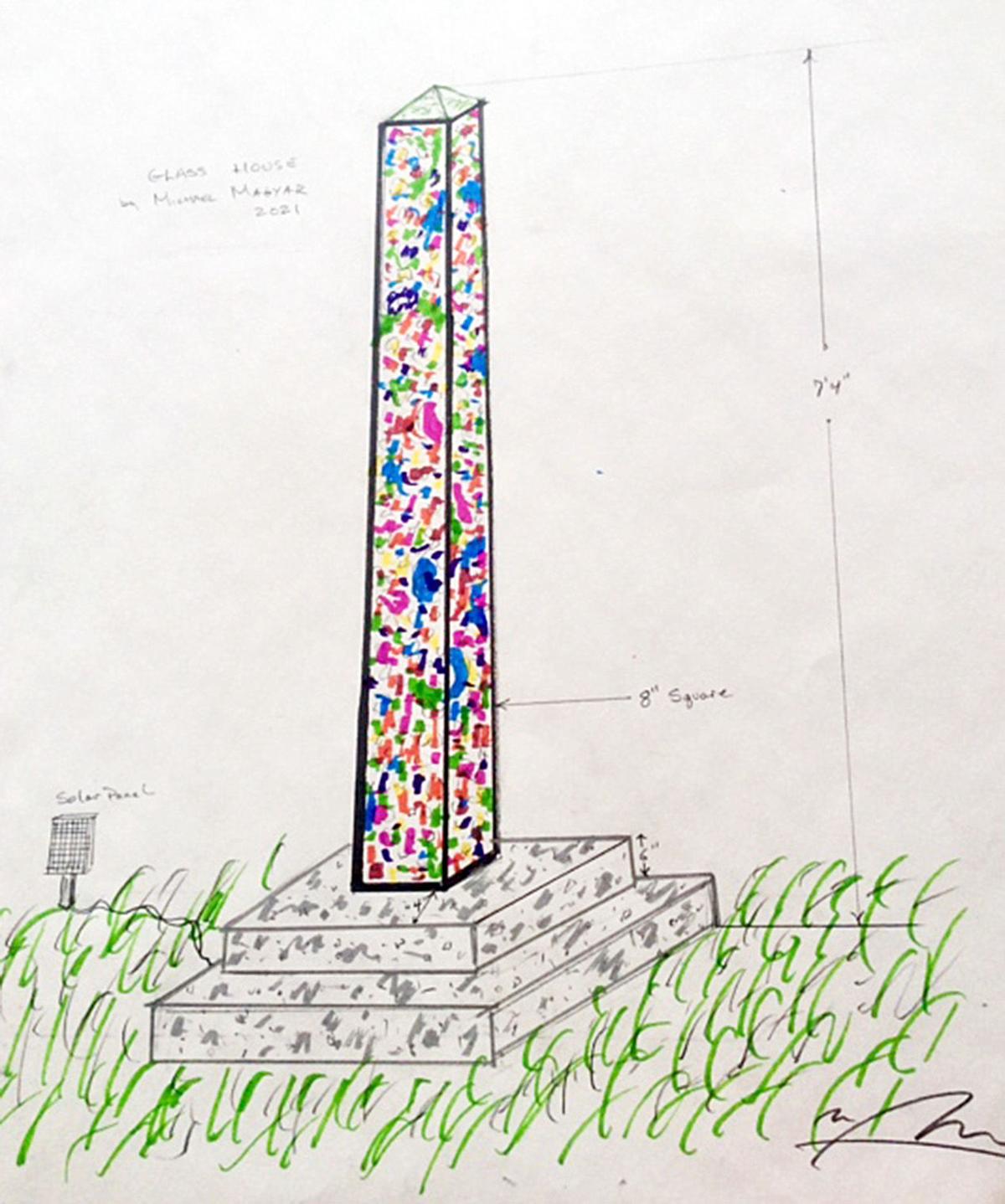 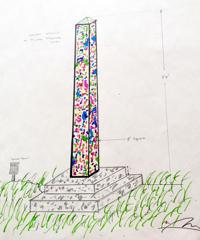 This sketch is an approximation of the obelisk that artist Michael Magyar is planning to create as a temporary installation in front of Sandwich Town Hall.

Beginning in the fall, a 7-foot-tall glass obelisk lit from within and decorated with other glass pieces will adorn the lawn next to the Dexter Grist Mill at the edge of Shawme Pond in Sandwich Village.

Mr. Magyar, creator of the Sandwich Giants, said this new work will blend the history of the Boston and Sandwich Glass Factory with the glasswork of contemporary artists.

Mr. Magyar said the sculpture will be a 7-foot-tall, 8-inch-wide obelisk made of plate glass with an iron frame. The obelisk will be situated on a square concrete base, reminiscent of the base of the Sandwich dolphin candlestick.

On two sides of the obelisk, glass shards that have been salvaged from the factory site will be attached, while the other two sides will be adorned with the glass remnants from local contemporary glass artists.

“The shards still have an intense beauty and will glow like precious gems when lit up from the interior of the structure,” Mr. Magyar said in his proposal.

The structure will be lit from inside using a solar-powered bulb.

Mr. Magyar said that using the glass shards is his way of turning trash into treasure and bringing beauty back to something that was thrown away.

Creating glass sculptures that are lit from within is a particular passion of Mr. Magyar’s. He said the idea comes from the energy that glass has as it is being blown.

When hot glass is at the end of the pipe used to blow it, it glows red. After the piece is completed, that glow goes away.

Mr. Magyar said adding a light element to the sculptures will bring that energy back to life.

The proposed sculpture is expected to be ready for display by October and will be installed for about three years. After its run, Mr. Magyar said, it will be auctioned off and the money earned will go toward funding the next public art project in town.

Now that the sculpture proposal has been approved by the Glass Town committee, it still has to be approved by the board of selectmen. The project is on the board’s agenda for Thursday, April 1.

Glass Town committee chairwoman Jeanne G. Prendergast said the committee received two proposals for the public art project, both of which Ms. Prendergast said were strong. She said the criteria for the project included incorporating Sandwich history in some way, being made of glass or glass components, lit by solar lighting, and being engaging to the public.

Mr. Magyar’s proposal checked all of those boxes.

“No one deserves it better than Michael,” Ms. Prendergast said. “He is a very serious artist, a very inventive person.”

Since Mr. Magyar is local to Sandwich, he will be able to attend to the maintenance of the piece once it is installed.

In addition to being an attraction for the district, Ms. Prendergast said, she hopes it can be used for educational purposes.

“What a great trip it would be for our art students,” she said. “They could sit on the lawn, sketch it, draw it.”

Ms. Prendergast said that this is the committee’s first foray into the realm of public art and that it would like to do more of these projects in the future.

She said the committee wanted this particular project to be a temporary installation because the members knew that some people will be against having a sculpture at the grist mill.

Thanks once again to Michael's generosity of his time,talents,creativity,and love of our community. I can't wait to see it. Thanks to the committee for this excellent idea,and again,to Michael.

What a great idea! Can't wait to see it. He has been wonderful for our town. I remember years ago finding a stash of unpolished Sandwich glass.