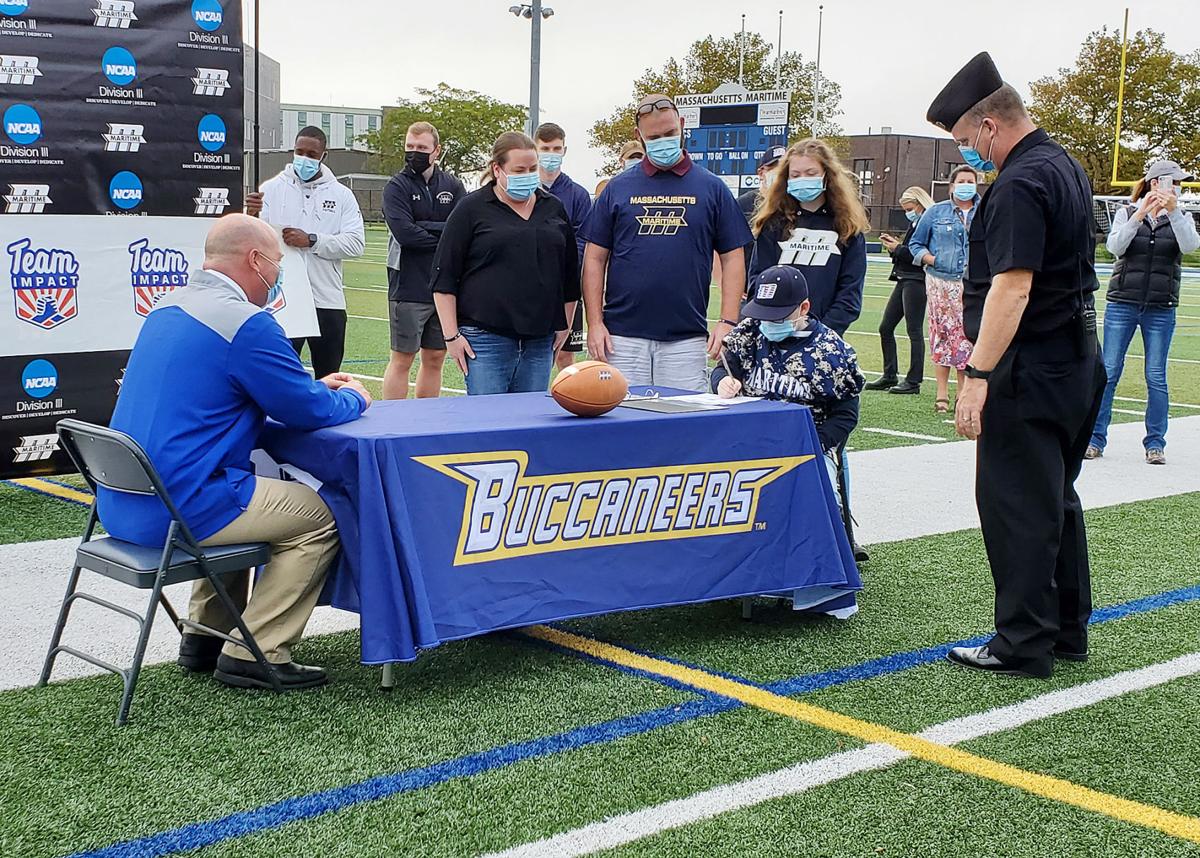 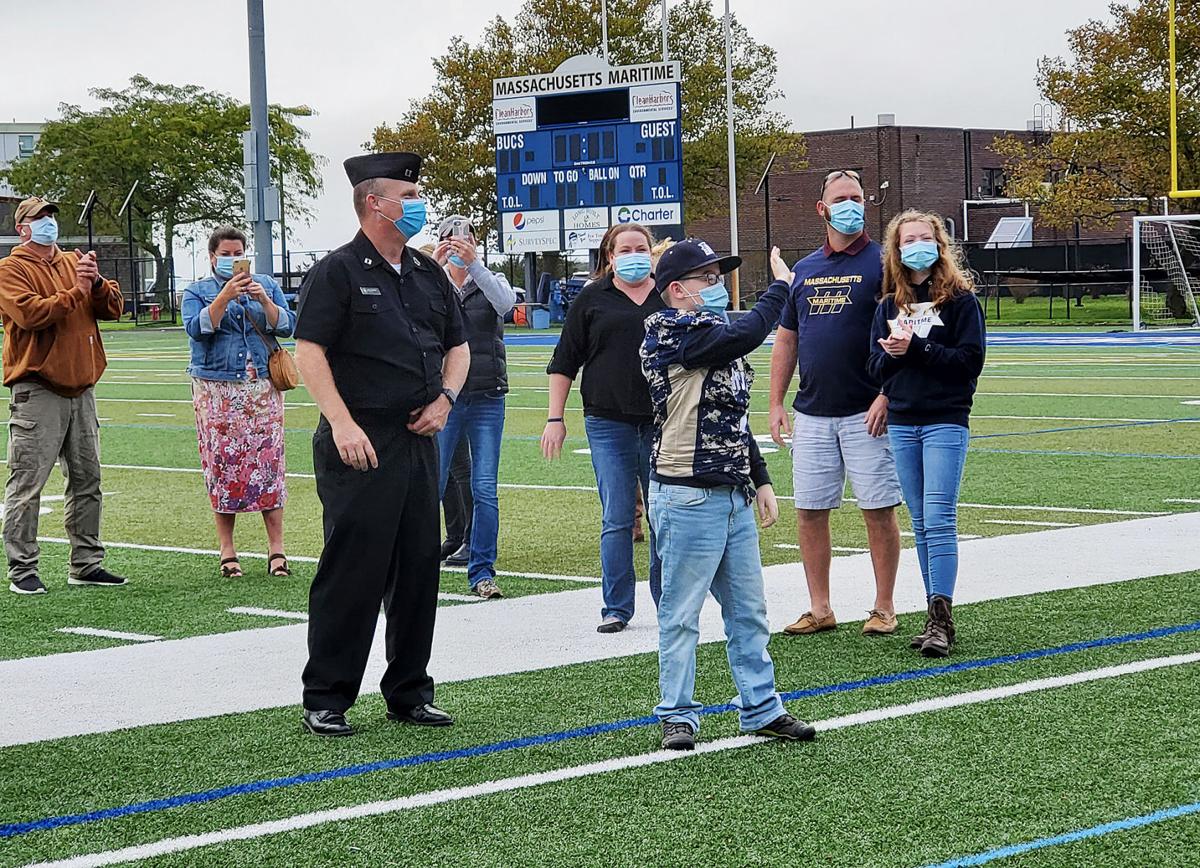 Charlie Orcutt waves to his fans after signing a letter of intent to join the Massachusetts Maritime Academy Buccaneers football team. 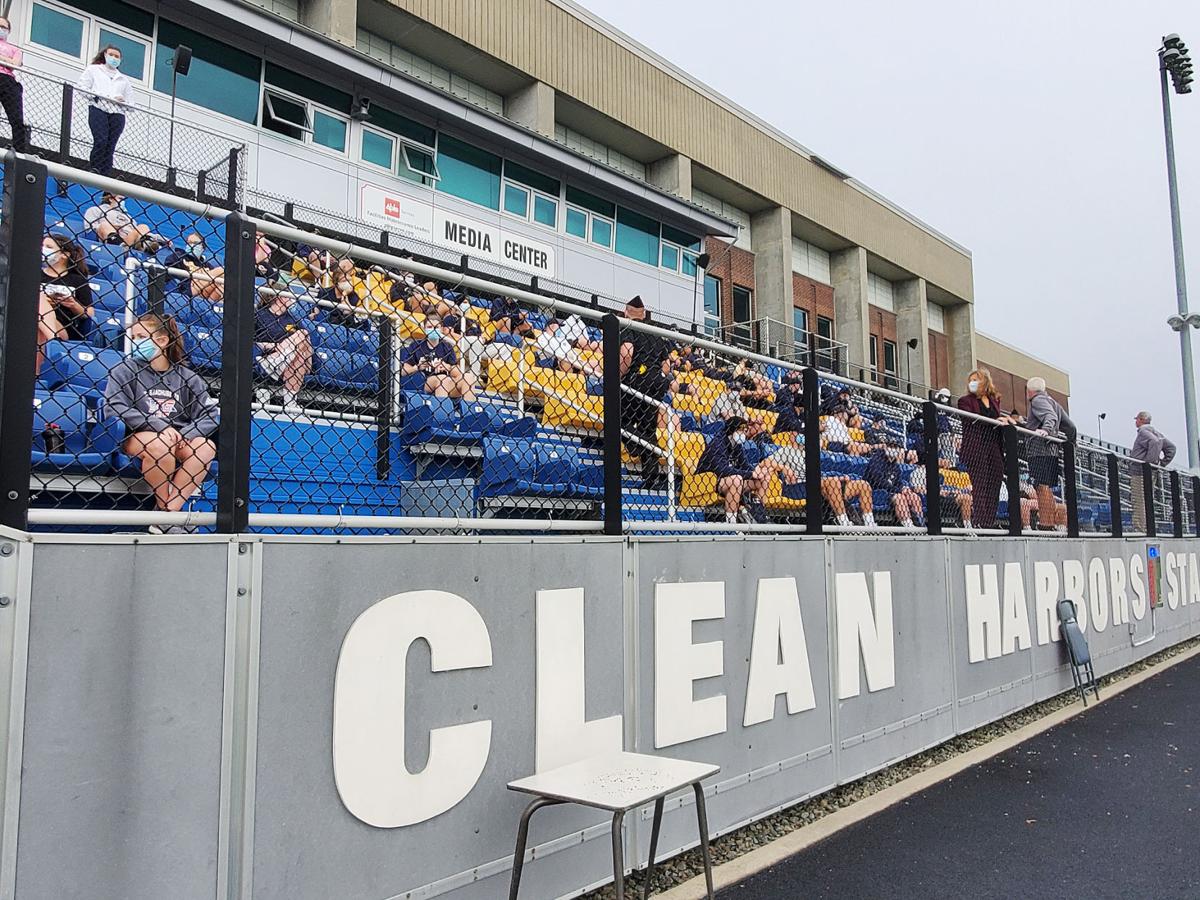 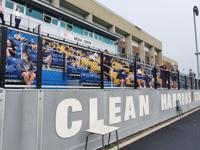 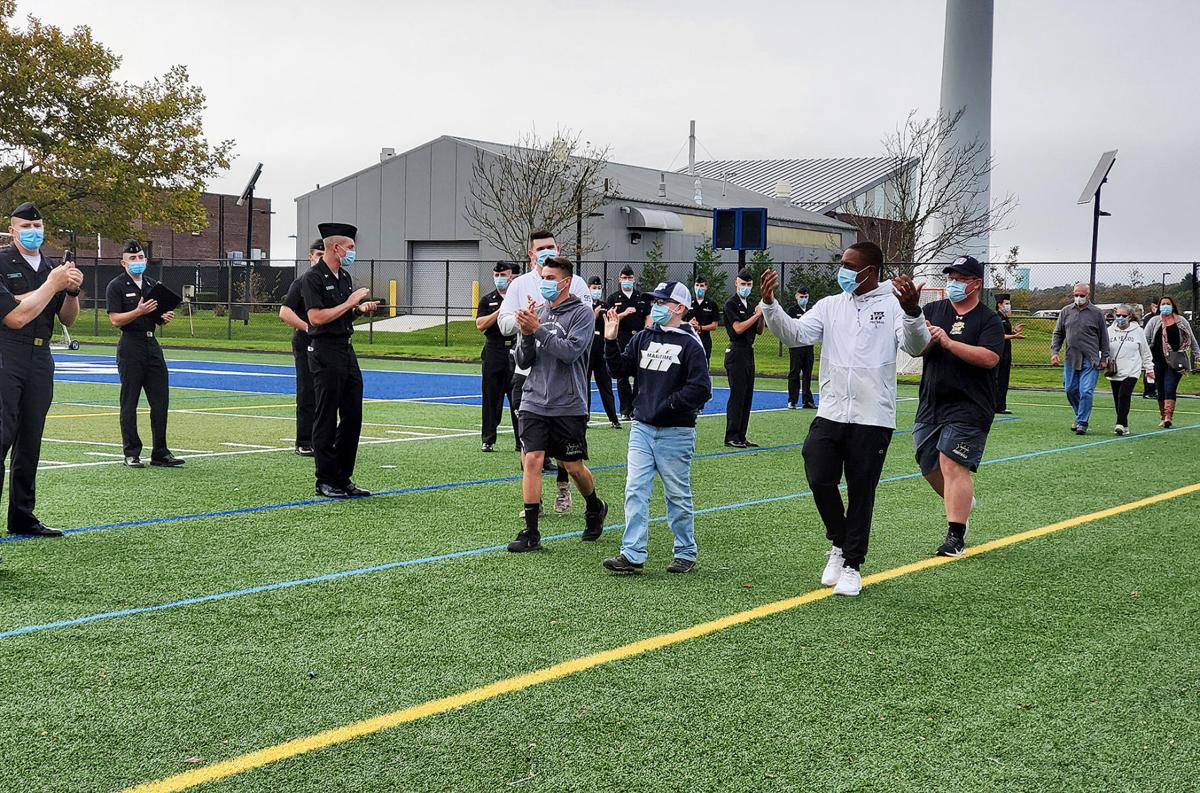 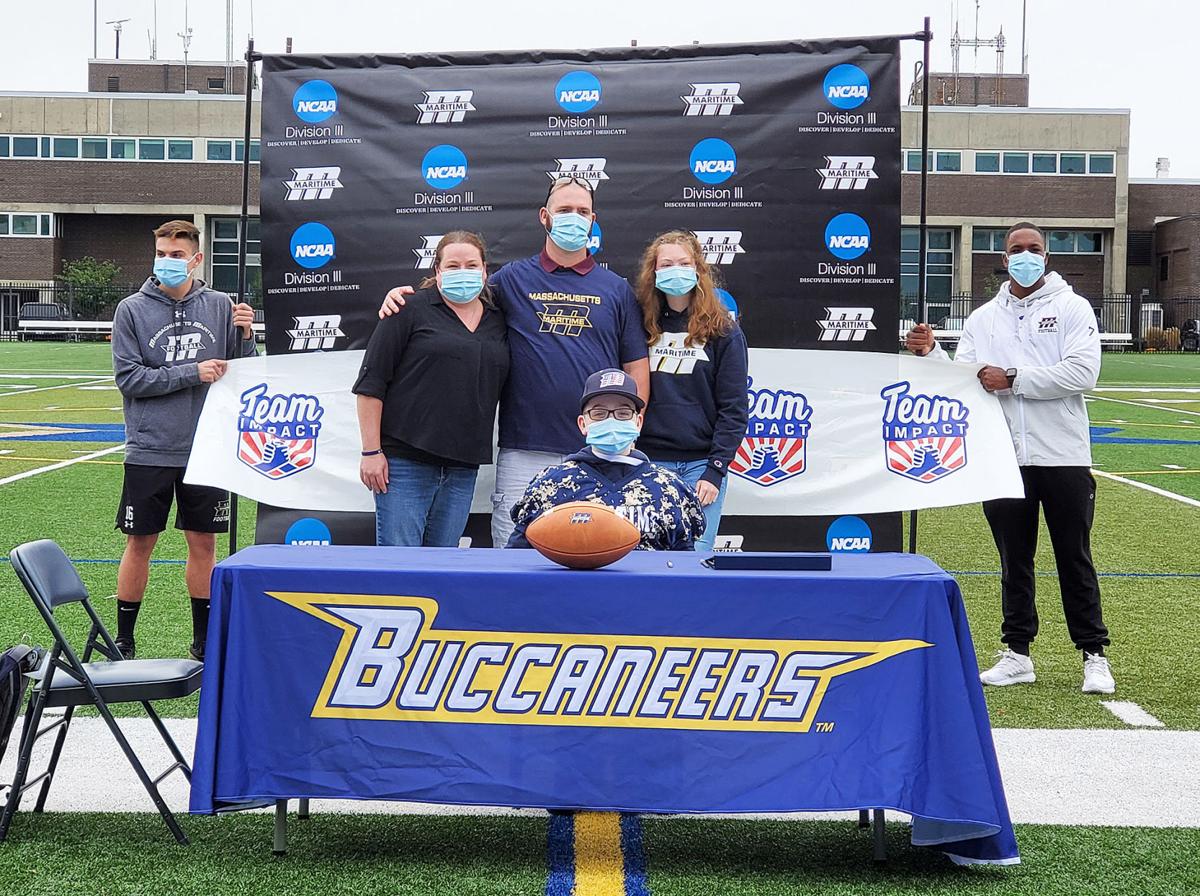 Charlie Orcutt, seated, after signing his letter of intent to join the Buccaneers football team. Behind him are his mother, Erin Orcutt; father, Ken Orcutt; and sister, Samantha Orcutt; and cadets Dane Campbell and Conner Reynolds.

Charlie Orcutt waves to his fans after signing a letter of intent to join the Massachusetts Maritime Academy Buccaneers football team.

Charlie Orcutt, seated, after signing his letter of intent to join the Buccaneers football team. Behind him are his mother, Erin Orcutt; father, Ken Orcutt; and sister, Samantha Orcutt; and cadets Dane Campbell and Conner Reynolds.

Charlie, who suffered a traumatic brain injury in 2018, was able to sign onto the team as part of an initiative through Team IMPACT, an organization connecting children with lifelong illnesses to college athletics.

On Wednesday afternoon, October 21, Charlie walked onto the Clean Harbors Football Field to rows of cadets chanting his name and a socially distanced stadium filled with cheering fans as he made his way to a table on the 50-yard line where his letter of intent was waiting.

Upon reaching the center of the field, assistant football coach John Muldoon handed Charlie a jersey emblazoned with the number 1 as well as an academy baseball cap. Once he had donned his new gear, he turned to the stands and gave everyone a big wave before getting down to the business of signing the letter.

After he signed the document, Charlie stood up and saluted the crowd.

Charlie said that signing on with the team felt good, though he said his feelings on the matter were difficult to explain.

When asked if he plans on playing football in the future, he replied that yes, he does. His mother, Erin Orcutt, quipped that he would not be playing for Bridgewater State University—her alma mater and the academy’s rival.

Charlie said that he hopes to play as the quarterback one day.

He was also asked if his friends were super jealous of him signing onto the team.

“I don’t think they even know,” he said.

As a member of the team, Charlie will attend practices, games, team dinners, and team events. Charlie has been connected with the team since last year’s Cranberry Bowl, though the typically trajectory of the program was derailed due to COVID-19.

Still, the team has gone out of its way to include Charlie. Every other week, the team connects with Charlie in a video conference where he gets to virtually hang out with the coaches and some of his teammates. Over the summer, the coaches came by his house to deliver pizza so that Charlie could have a virtual pizza party with the team.

Team IMPACT is a Massachusetts-based organization that connects children with serious and chronic illnesses with college athletes in order to tackle the isolation and emotional trauma that can come with those diagnoses. Since being founded in 2011, the organization has connected more than 2,100 children to more than 700 college and university teams.

Charlie, an Oak Ridge School fifth grader, suffered a traumatic brain injury when he fell down a flight of stairs at a friend’s house. He was flown to Boston Children’s Hospital following the accident, where he was diagnosed with a concussion.

However, for weeks following the accident, he was still struggling to walk unassisted and it was clear that his vision had also been impacted, said Ms. Orcutt.

A month later, Charlie was diagnosed with persistent postural-perceptual dizziness.

Ms. Orcutt said that Charlie still struggles maintaining balance and has to wear glasses now, which he did not need before the accident. She said that he has improved, however, and no longer needs to use a cane to walk.

Charlie suffers some daily symptoms such as headaches and nausea, and constantly feels as though he is walking on a rocking boat, Ms. Orcutt said. The injury also means that too much stimulation can overload his brain.

“School is still a struggle, but he works really hard and we’re really proud of how much he gives each day,” Ms. Orcutt said. “It’s a hidden disorder, you look at him and you don’t know how much he’s struggling.”

While Charlie is considering attending the academy when he is older, he also has his sights on the Massachusetts Institute of Technology, where he would study astrophysics or engineering. He said that his heroes included Stephen Hawking, Albert Einstein, and Neil deGrasse Tyson.

The family is grateful for being able to be involved with Team IMPACT and the academy. Ms. Orcutt said that they are specifically thankful for the group of players who have been so engaged with Charlie throughout the past year.

“I keep saying that I want to thank their parents for raising them so well,” Ms. Orcutt said of Charlie’s teammates.

So nice to read community stories that are so positive. The Orcutt’s have been our neighbors for more than 40 years and Charlie’s drive to learn and exceed expectations is a direct result of Erin, Ken, Sam and the other family members and friends that love him.