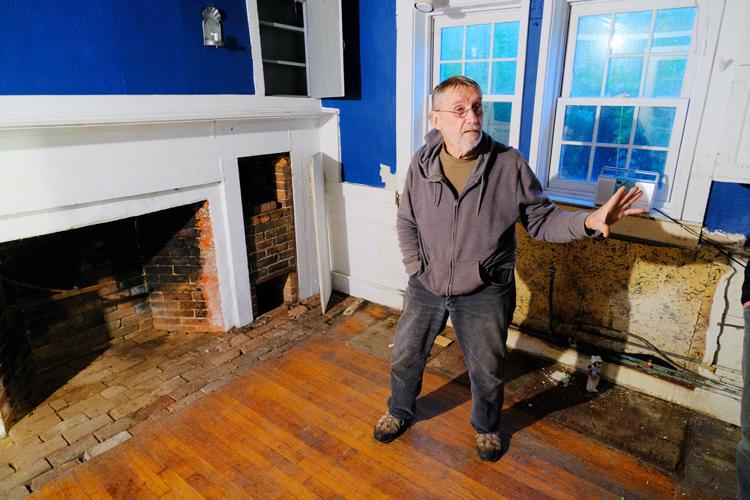 Sandwich Historic District Committee member Ross Vander Pyl explains renovation plans for the old home on 1 Harbor Street that he and former committee chairman Richard Claytor purchased to save it from demolition. 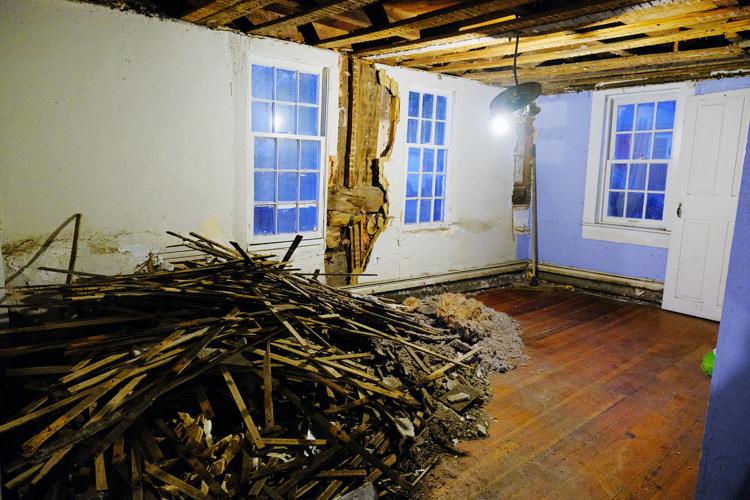 The plaster and lath from an old ceiling is heaped in the corner of one of the rooms. The crumbling ceiling was removed to gain access to the joists above. Much of the initial work that will be done is to shore up the old structure. 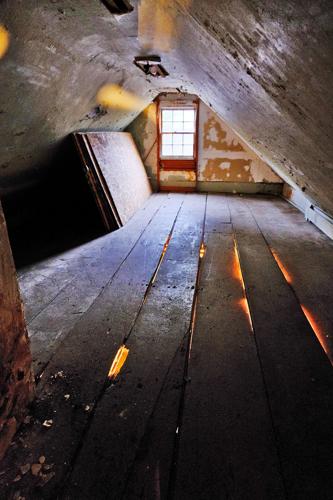 Light from downstairs peaks through the old floorboard in a second-floor room. 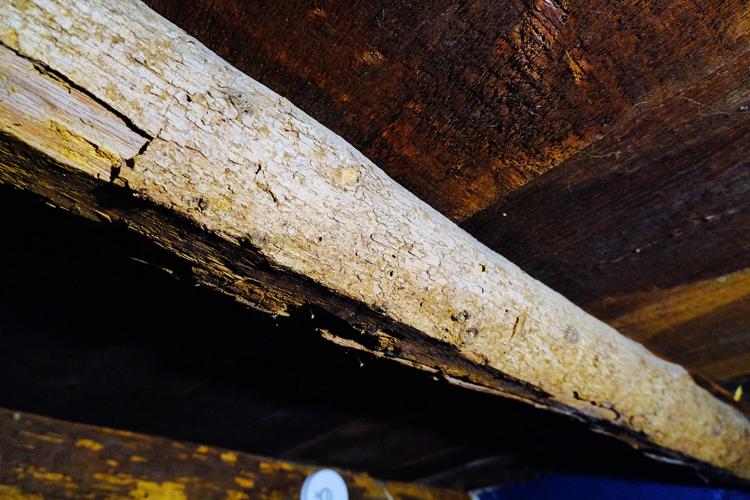 One of the rough-hewn ceiling beams in the kitchen at 1 Harbor Street still has bark on it. 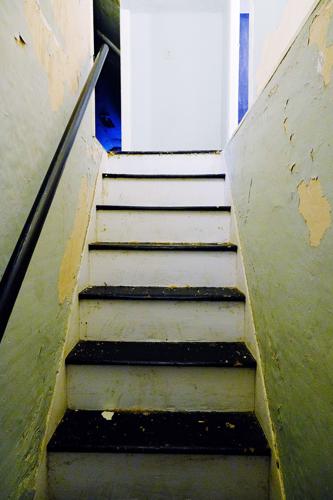 A tight staircase leads up to the second floor of the house. 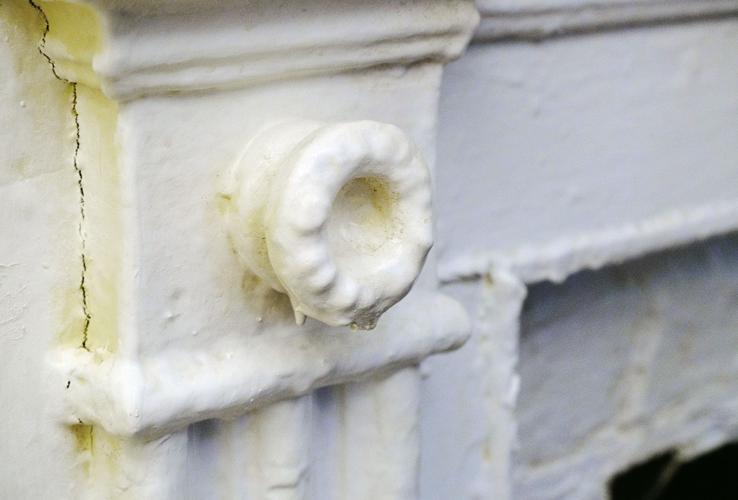 A detail on one of the old fireplaces might be made of Sandwich glass. 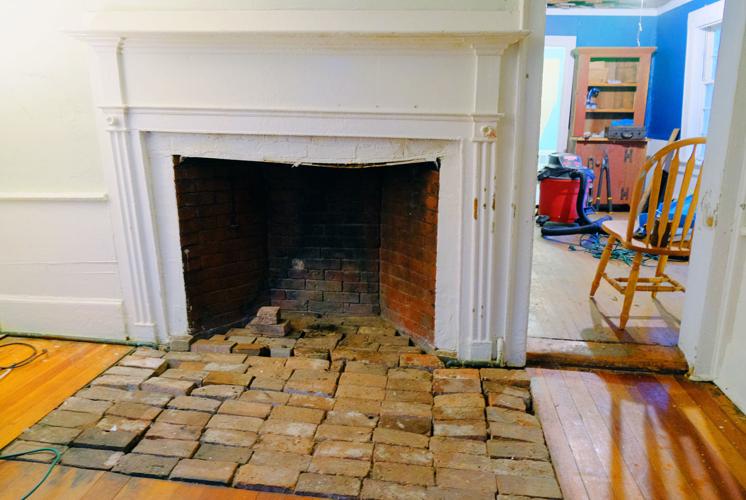 The living room fireplace is back to back with the kitchen fireplace. 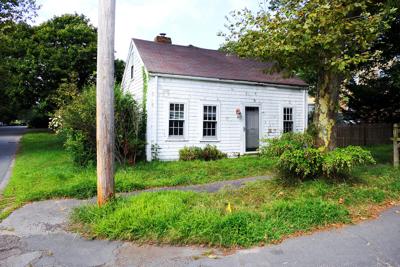 A crumbling house on Harbor Street, a shelter to generations of families for more than a century, has itself been granted sanctuary.

Instead of being dismantled, the tiny house will be brought back to life and restored, as closely as possible, to the way it looked in the 1800s.

The tale of 1 Harbor Street’s salvation is a quintessential Sandwich story revolving around a handful of people committed to preservation in a town that thrives on history.

The house came to the attention of the Sandwich Historic District Committee earlier this year when owners Peter Thomas and Kirby Holmes requested permission to demolish the deteriorated two-story house.

The couple told the committee that they bought the home five years ago with the idea of refurbishing it. They sought estimates and advice from several contractors and were told the place was too far gone.

In addition, the couple said, many parts of the house had already been replaced and other sections had been haphazardly added.

“It has had so many parts already replaced. It is a Franken-house,” Mr. Thomas told the committee.

An impromptu tour of the house this week substantiated what Mr. Thomas had been saying.

Beyond the tiny living room and kitchen, a modern sliding door opens to a side yard, the multi-paned windows and sills are relatively new and the rooms are not uniform in size or shape. Even the doorways to adjacent rooms are set at different heights.

“It almost seems as if two buildings were pushed together,” said Ross Vander Pyl, who was conducting the tour on a rainy afternoon. “This back section is different from the front section.”

Mr. Vander Pyl, a member of the historic district committee, recently bought the house—along with former committee chairman Richard A. Claytor—to save it.

The two men, and their colleagues on the historic committee, work to preserve the remaining structures that comprise the town’s original historic district.

It’s a serious mission in a town known as “the oldest town on Cape Cod.” But this is the very first time two members of the committee, with their own money, bought a home to save it from destruction.

When the committee members first heard the demolition request from Mr. Thomas and Ms. Holmes, they asked that the decision be postponed for 60 days.

“This structure has been able to stand all these years, in spite of all the neglect,” said Mr. Claytor, who was the chairman of the committee at the time. “If we don’t save it, it’s gone.”{h4 style=”text-align: center;”} {/h4}

William R. Collins, another member of the committee, urged the owners to advertise the building in preservation periodicals and websites before seeking a demolition permit.

The owners, who said they had already spent more time and money on the house than they could afford, reluctantly agreed.

They contacted Sarah Korjeff, the historic preservation specialist with the Cape Cod Commission, and ask her to place the “hail Mary” ads for the property.

They did not hold out much hope for a savior, however.

“We think it is unsalvageable,” Mr. Thomas said at the time.

The couple’s daughter lived in the Cape-style home for three years and then Mr. Thomas and Ms. Holmes tried to sell it. But they received no legitimate offers.

When the couple finally decided they should knock it down and start anew, they ran headlong into the historic district committee’s mission to preserve the past.

“It’s very frustrating,” Ms. Holmes said last spring. “We are trying to do the right thing.”

Meanwhile, the committee members made a site visit to the house, consulted with David Wheelock, a local carpenter who specializes in historic restoration, and contacted Ms. Korjeff for an opinion.

Mr. Wheelock, the committee reported, had said anything can be restored with money and expertise.

Ms. Korjeff estimated that the house at 1 Harbor Street was among the single- and multi-family houses built from 1825 to 1860 as housing for the Boston & Sandwich Glass Factory. Others, however think parts of the house are much older — predating the glass factor by decades.

The preservation specialist did not make a recommendation about saving or demolishing it, but noted, “The building plays a role in defining the streetscape of two roadways because of its location on a corner lot. It is an example of a modest historic housing type typical of the glass factory housing in the district.”

Confirmation of the house’s bona fides deepened the committee members’ commitment to save it.

The guidelines help homeowners determine whether structures on their property—such as homes, barns, and guesthouses—are historically significant.

If buildings are more than 75 years old and are located within a historic district, the committee wants be consulted. The committee, in turn, researches the history to determine whether the structure is of historical significance.

If it is significant, the committee will help the homeowner determine the best course of action, the guidelines say.

If a historic structure is demolished, the committee would like them replaced with replicas or close facsimiles, its members have said.

The committee would like to see homeowners follow the US Secretary of the Interior’s guidelines to repair, restore, and replace—in that order.

If a building must be demolished, say, for safety reasons, the committee would like to have the building materials salvaged.

Mr. Thomas and Ms. Holmes came back to the committee at the end of the summer saying they had received no offers on the house and wanted to proceed with demolition.

In September, the committee finally granted the owners a demolition permit.

At the same time, Mr. Claytor expressed interest in purchasing the house, but he had to get permission to do so from the town attorney. Mr. Claytor subsequently quit the committee saying the failed efforts to save the Harbor Street house and other historic structures had demoralized him.

By that time the time Mr. Claytor and the owners had gone back and forth about the price. Negotiations had apparently come to a standstill.

But last week, news leaked out that Mr. Claytor and Mr. Vander Pyl had teamed up and raised the $115,000 needed to purchase the house from Ms. Holmes and Mr. Thomas. They took ownership on October 25.

But they might want to keep their checkbooks handy.

Estimates for stabilizing the shifting foundation have ranged from $60,000 to $80,000, according to the committee and Mr. Thomas.

Mr. Thomas said this week that he and Ms. Holmes had a pending contract with RW Anderson & Sons, a local contractor who offered to buy the property once the demolition permit had been secured.

Mr. Thomas and Ms. Holmes asked Mr. Anderson to void the contract so the house could be saved.

“He agreed, even though he had laid out money for plans and engineering. And we agreed to accept the lower offer,” Mr. Thomas said. “I am thrilled to see this happen. I will be watching with great interest.”

The new owners have already ripped down modern ceilings and hammered through wood siding to reveal mysterious crawl spaces behind the upstairs bedrooms.

Mr. Vander Pyl’s eyes sparkle as he talks about the house and the secrets that might unfold as it is restored.

Last weekend he found a child’s silver ring beneath a floorboard. The kitchen fireplace encompasses a beehive oven for baking bread. White painted knobs on the living room fireplace could be made of glass from the Sandwich glass factory, he says.

Mr. Vander Pyl, who has lived in the neighborhood for 50 years, knows some of the house’s past inhabitants and looks forward to hearing from others who “can fill in little pieces of the history,” he said.

“If anybody knows anything, they can email me at 12statestreet@comcast.net,” Mr. Vander Pyl said.

Good for them. An inspiring effort. A wholesome read.

Local Landscapes Are Theme Of Art Show by Laurie Warner

Check your email for details.

Submitting this form below will send a message to your email with a link to change your password.

An email message containing instructions on how to reset your password has been sent to the e-mail address listed on your account.

Your purchase was successful, and you are now logged in.

A receipt was sent to your email.