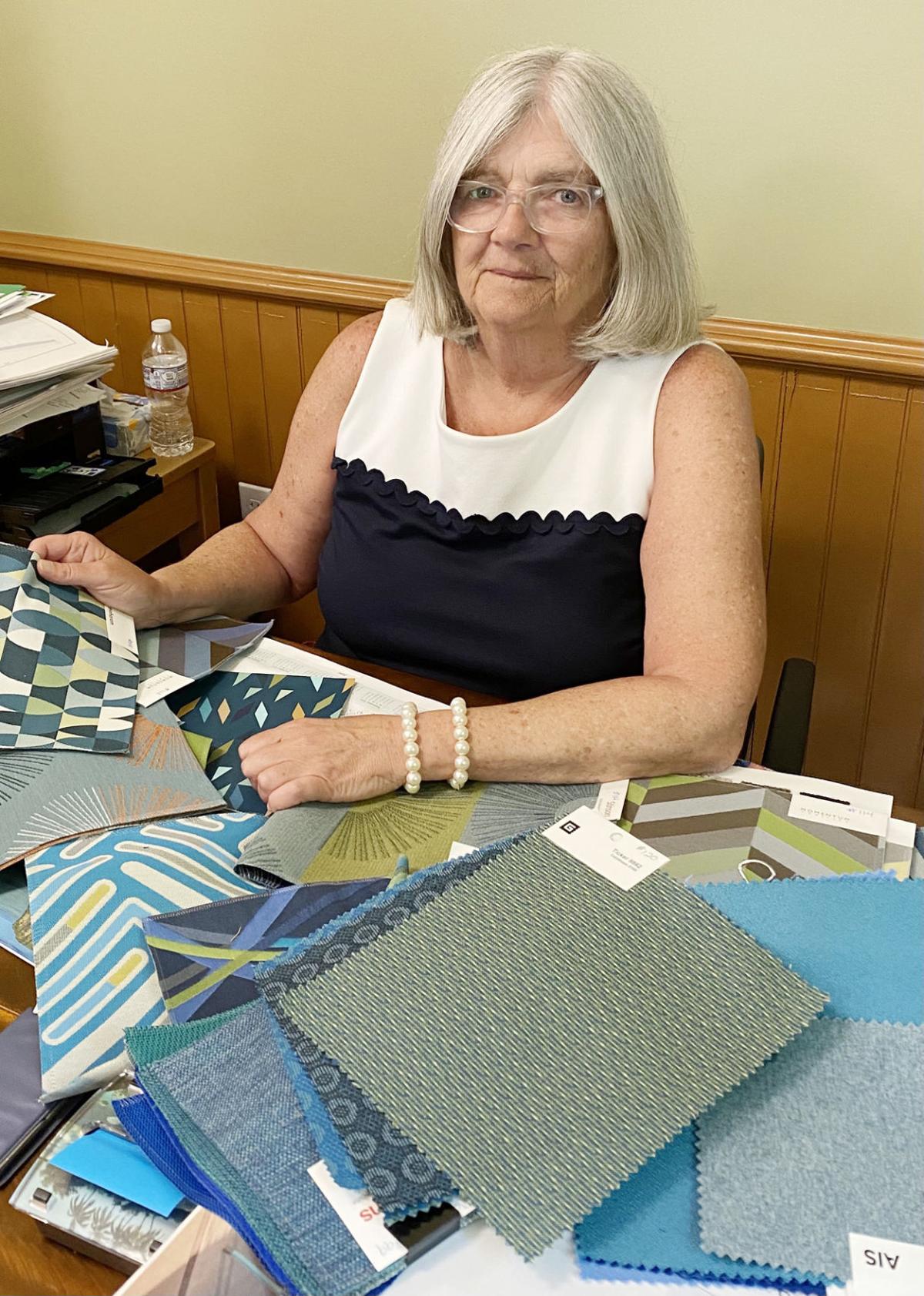 Joanne Lamothe sits with some of the many fabric swatches she considered while trying to pick colors and patterns for the interior of the town’s redesigned library. 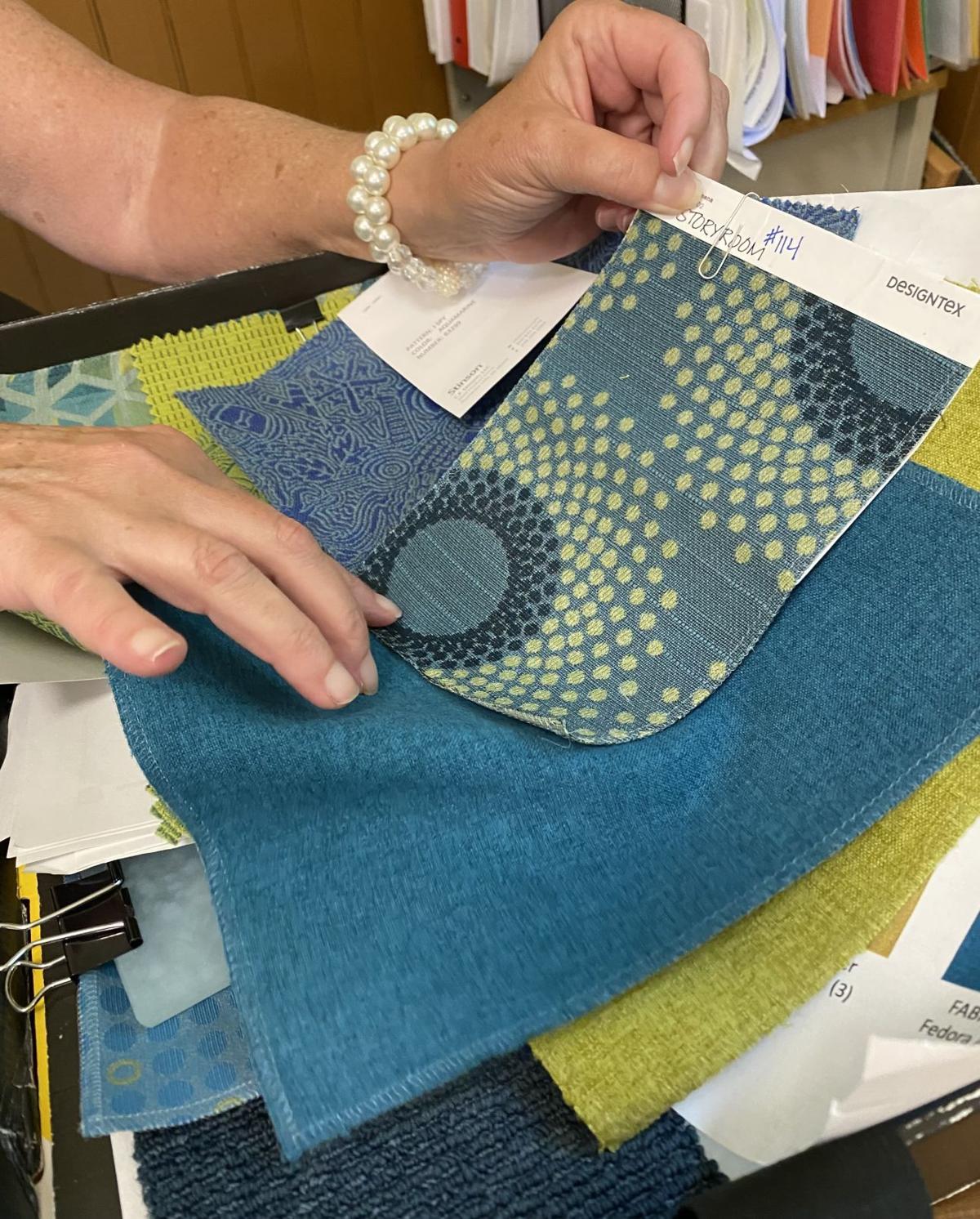 Some of the fabric swatches Joanne Lamothe considered.

For many days during the pandemic, Library Director Joanne Lamothe sat among a sea of fabric swatches trying to choose colors and patterns that were “Cape Cod beach-y, but not too much so.”

She was not choosing the fabric for her own space but for that of the public library on Main Street, which is now nearing the final stretch of a $3.5 million renovation.

Ms. Lamothe sat in her living room every weekend looking, literally, at hundreds and hundreds of washcloth-sized pieces of upholstery.

“It really was a challenge. It was stressful,” Ms. Lamothe said during an interview this week. “One Sunday I just sat there cross-legged and said ‘I can’t do this.’”

But then she rallied. She sorted through blues and greens and mixtures of the two. She added pops of orange and yellow for the children’s room and powered through the materials for the MacKnight Room, and picked a sky blue glasslike countertop for the tech bar and a darker blue stone for the circulation desk’s surface and suddenly the task became fun.

Ms. Lamothe discovered a patterned material for children’s room chairs that, if you look closely, contains roller skates and fish and baseballs and owls.

“I wanted it to be fun, but not babyish,” she said.

The library director ran her choices by members of the staff and—when they were available—the principle architects working on the building. But because showrooms were closed and public gatherings discouraged, Ms. Lamothe became the ultimate decider-in-chief.

Now that the hard choices have been made, Ms. Lamothe said she is eager to see what the colors and fabrics will look like on the actual furniture and rugs. She also chose driftwood-like wood for shelving and modular furniture that can moved around and modified for different uses.

The conference table in the MacKnight Room, for example, can be reconfigured into smaller tables, or folded up and put aside. Mini file cabinets have cushioned tops so they can double as guest chairs, Ms. Lamothe said.

“It’s really exciting to see it all coming together,” she said of the library building.

The furniture is expected to be delivered later this month, but the shelving delivery date has been delayed, which in turn has pushed back the library reopening to sometime around Labor Day.

When the public returns, they will see a technology-friendly building with inviting, uncluttered rooms filled with light and open space, she said.

The renovated library will include a new space for the archives, enlarged meeting spaces and a larger children’s room. The children’s room windows will overlook the forest and bins of books, rather than the stacks, to make it easier for children to browse the collections.

The patio out back has been landscaped and redesigned to create an inviting space to sit and enjoy nature, Ms. Lamothe said this week.

Ms. Lamothe said librarians around the state are concerned that after months of accessing library collections remotely, the public will be less inclined to visit their local libraries.

“Visiting the library is a habit and that habit has been broken,” Ms. Lamothe said. “My goal is to open in time for our summer visitors and residents to come take a look.”

And bring a friend.