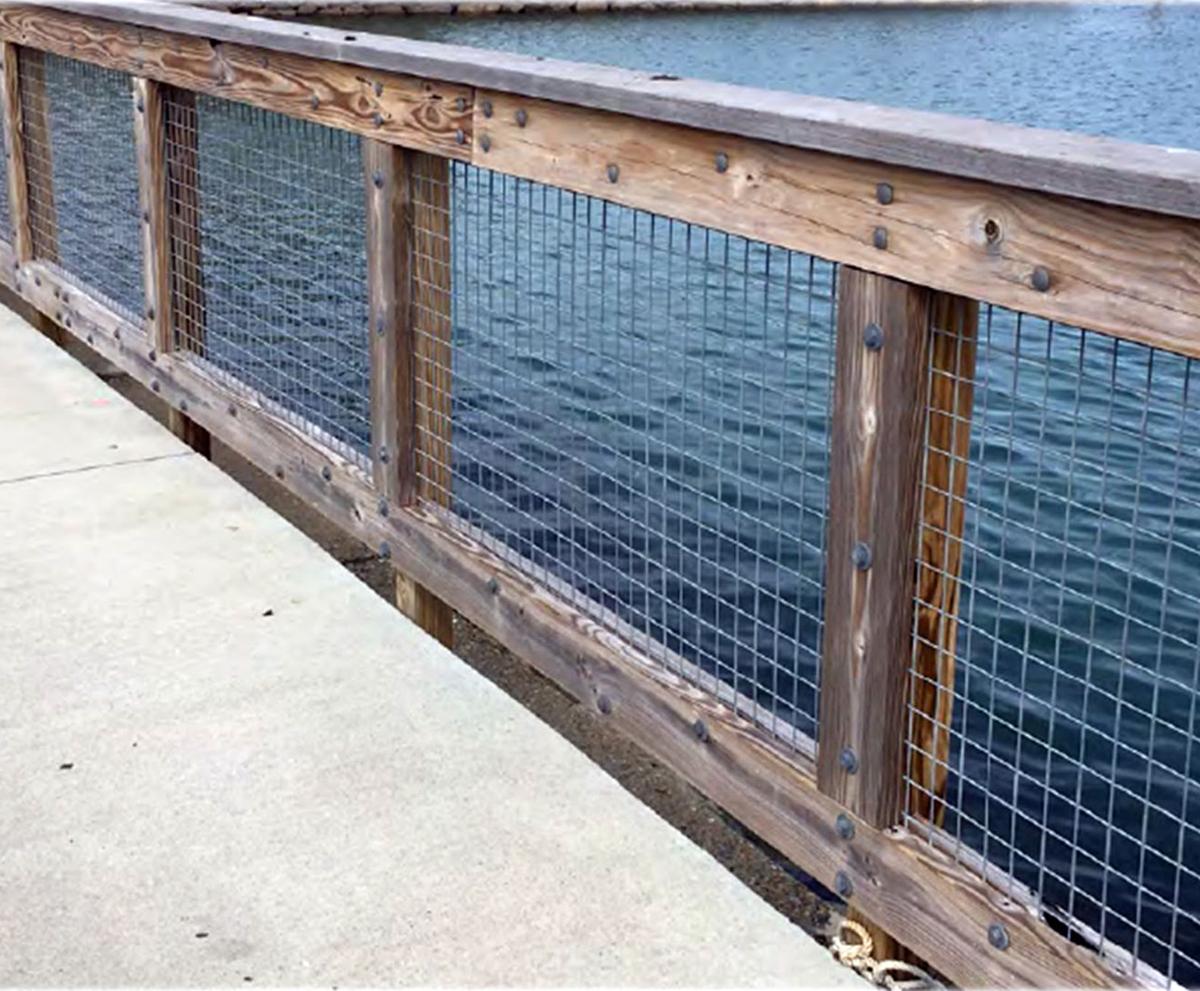 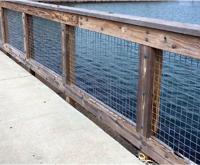 Among the railing designs being considered is one that incorporates metal mesh. Other options are timber rail, vertical picket, and horizontal cable. 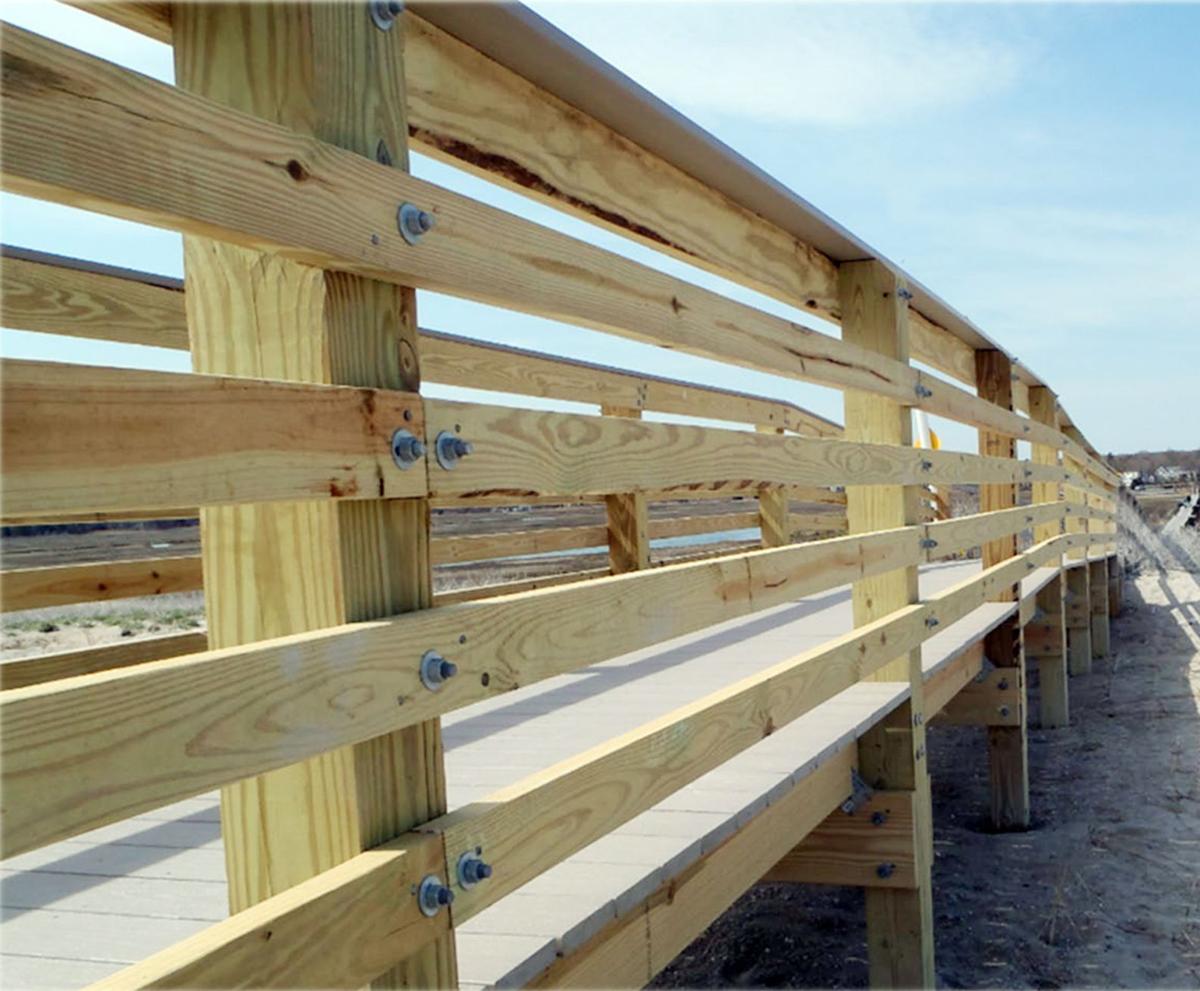 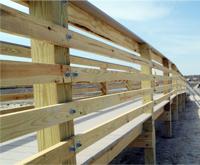 This timber railing design is similar to what currently exists on the last section of the boardwalk that passes over the dune. 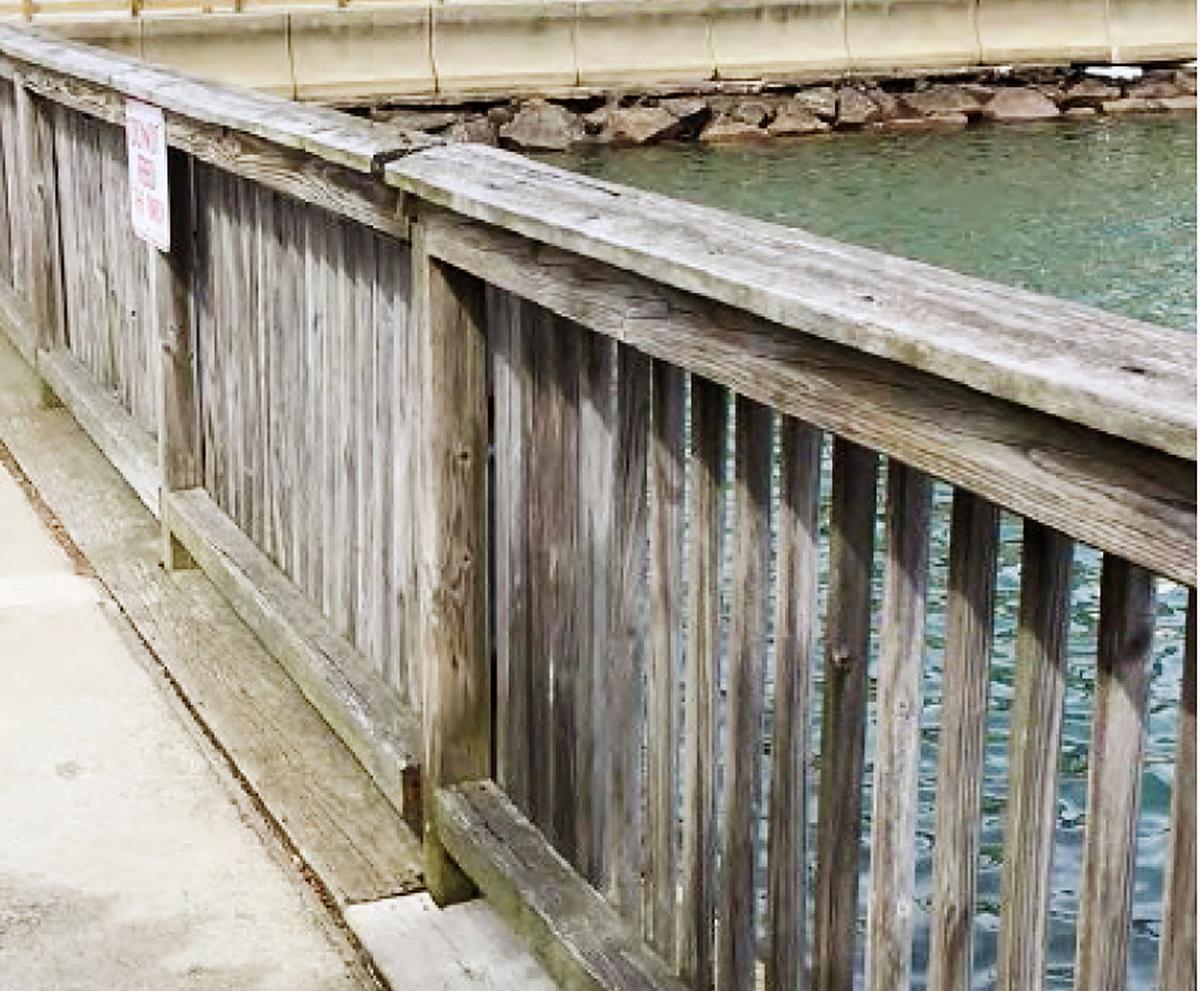 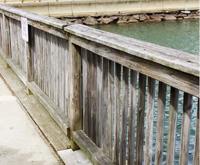 An example of vertical picket 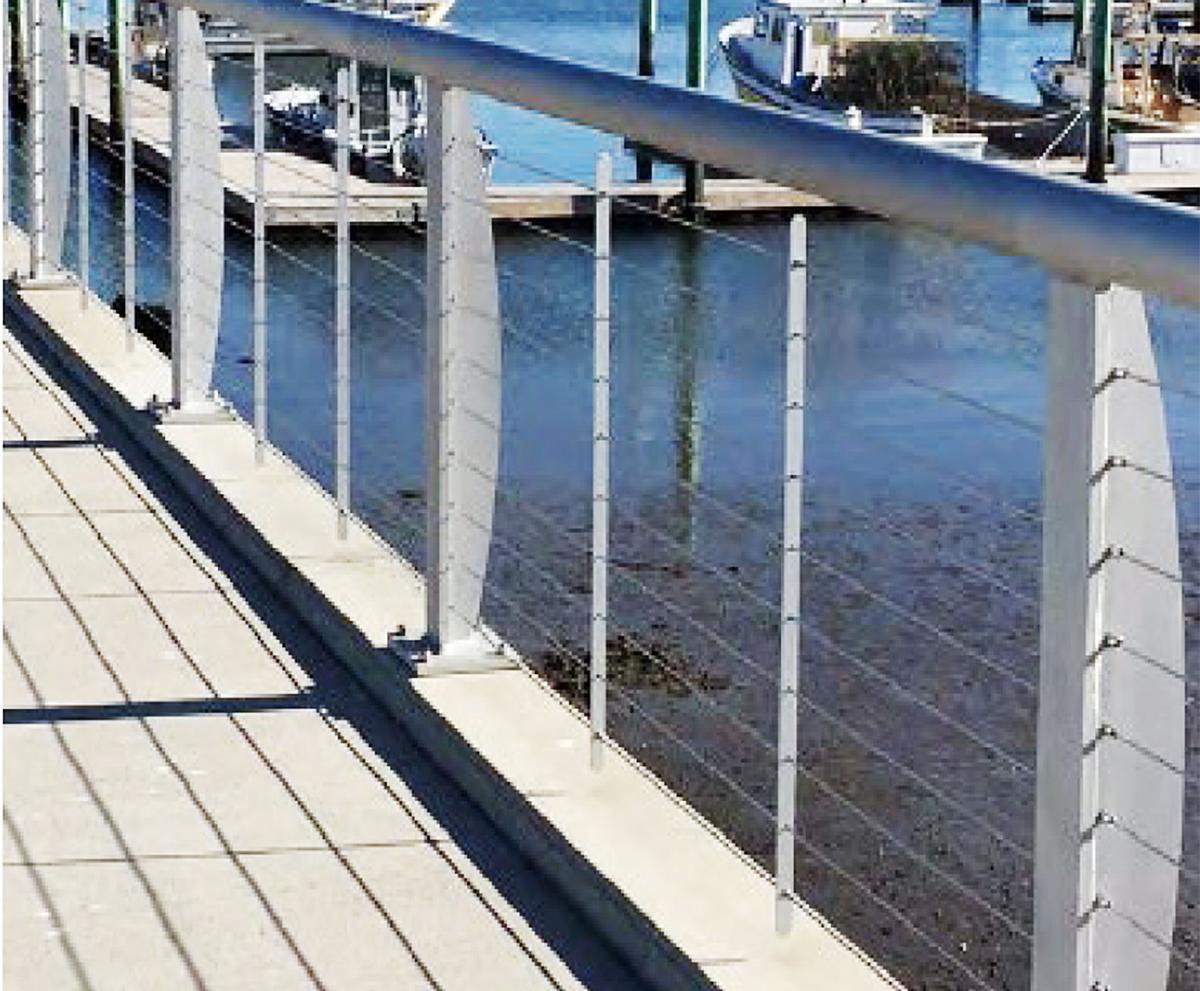 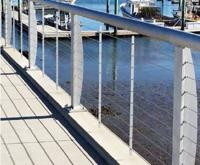 This rendering shows the relative size of the existing boardwalk as it passes over Mill Creek compared to the larger, taller proposal the town is considering.

COURTESY TOWN OF SANDWICH
1 of 4

Among the railing designs being considered is one that incorporates metal mesh. Other options are timber rail, vertical picket, and horizontal cable.

This timber railing design is similar to what currently exists on the last section of the boardwalk that passes over the dune.

An example of vertical picket

The most asked and re-asked question was whether children would still be able to jump off the stretch of boardwalk that spans Mill Creek when the walkway is elevated three more feet above the water line.

“How would a 12-year-old jump from what’s being proposed?” asked downtown resident Jonathan Fitch.

The answers were unclear.

Alan D. Pepin, of GEI Engineering, said he could not—as a matter of law—condone jumping off the reengineered boardwalk. But he agreed with a resident’s suggestion, later in the meeting, that some sort of “fishing platform” or swinging gate could be added to allow kids to continue the Sandwich rite of passage.

Raymond Howard, president of the Friends of Sandwich Boardwalk advocacy group, said the arch of the bridge over Mill Creek is crucial to the integrity of the design.

“The arch is one of the key elements,” Mr. Howard said. “People want a real arch.”

The Friends’ group has been advocating that the clean, simple lines of the existing boardwalk be preserved when the structure is rebuilt in the next couple of years.

Based on the artist’s renderings shown during the presentation last night, the newer versions of the redesign have taken criticisms of the original redesign into consideration.

For example, the current arch over Mill Creek will be maintained; the deck will be widened to six feet; the railing code will be minimized in places where the deck height is less than 30 inches; the number of horizontal rails on the railings could be limited via a waiver from building codes; and a plank engraving and donation program could be offered.

The renderings also showed four possible materials for the “infill” areas between the railings and the deck. They are horizontal planks, wire mesh, vertical pickets and horizontal steel cables.

Although none of the side material options is shown as preferred in the packet materials, GEI did observe that the “horizontal timbers...maintain [an] all-timber look.”

Selectman Robert J. George said he preferred to see the timbers currently used at the beach-side of the boardwalk be continued throughout.

Resident Laura Wing suggested that the mesh sides would allow better views of the ocean from the beach. Someone else observed that the mesh would provide less of an available surface for wind and storm damage.

No votes were taken by the Sandwich Board of Selectmen last night, however. The boardwalk is expected to be discussed at the next selectmen’s meeting in two weeks.

The new redesign and its options were a result of a collaboration between GEI, the town’s Engineering, Natural Resources and Building departments, Architect Wendell C. Kaslow, and the Woods Hole Group, the town’s beach consultant.

Besides the opinions of the Friends’ group, GEI and town engineers also considered input from members of the Sandwich Commission on Disability who want a safe boardwalk that is accessible to everyone.

Other members of the public, and people who worked on previous boardwalk repairs, had also asked that the engraved plank program be reinstated and that the previous engraved planks be memorialized in some way.

Not much was said about the plank sales program Thursday night, but Mr. Pepin said the tradition of engraving names on planks would be continued.

The March 2018 storms prompted the town to close the boardwalk for several months. A severe northeaster destroyed the beach stairs, twisted the boardwalk and sucked away sand worth millions of dollars.

Contractors were hired to temporarily repair the boardwalk damage. Company crews located, cleaned and reused many of the planks that had been scattered like matchsticks by the winds and tides.

Besides replacing and bracing storm-loosened boards, the workers drove pilings back into the marsh and reinforced the framework.

The building inspector allowed the boardwalk to reopen in June 2018, but the repairs were considered to be short-term. Voters at Town Meeting that year approved $2 million for long-term repairs, which included a total replacement of the boardwalk.

Part of that money was spent on GEI’s original engineering study.

But GEI’s redesign, while strong and sturdy-looking, attracted wide criticism from preservationists.

Mr. Kaslow did bring the elevation down a bit and added more of an arch, but he did not suggest radical changes.

When Mr. Fitch asked Mr. Kaslow last night whether the reimagined design is “the best” he could come up with, Mr. Kaslow said he had to lean into practicality.

“I wish climate change wasn’t real,” he said, but since it is, the threat of rising seas and storm damage had to be taken into consideration in coming up with the design.

Because the boardwalk must be elevated, “it will look substantially different than it does now,” Mr. Kaslow said.

“Unless the town wants to rebuild every 10 years, raising the base elevation is a reasonable and rational choice,” the architect added.

Mr. Kaslow, of the Somerville-based firm McGinley Kaslow & Associates, oversaw the renovation of town hall and the Sand Hill School Community Center, and he worked on the public library building.

The Sandwich Board of Selectmen Thursday, April 29, voted unanimously to approve a reimagined Sandwich Boardwalk that meets today’s safety cod…