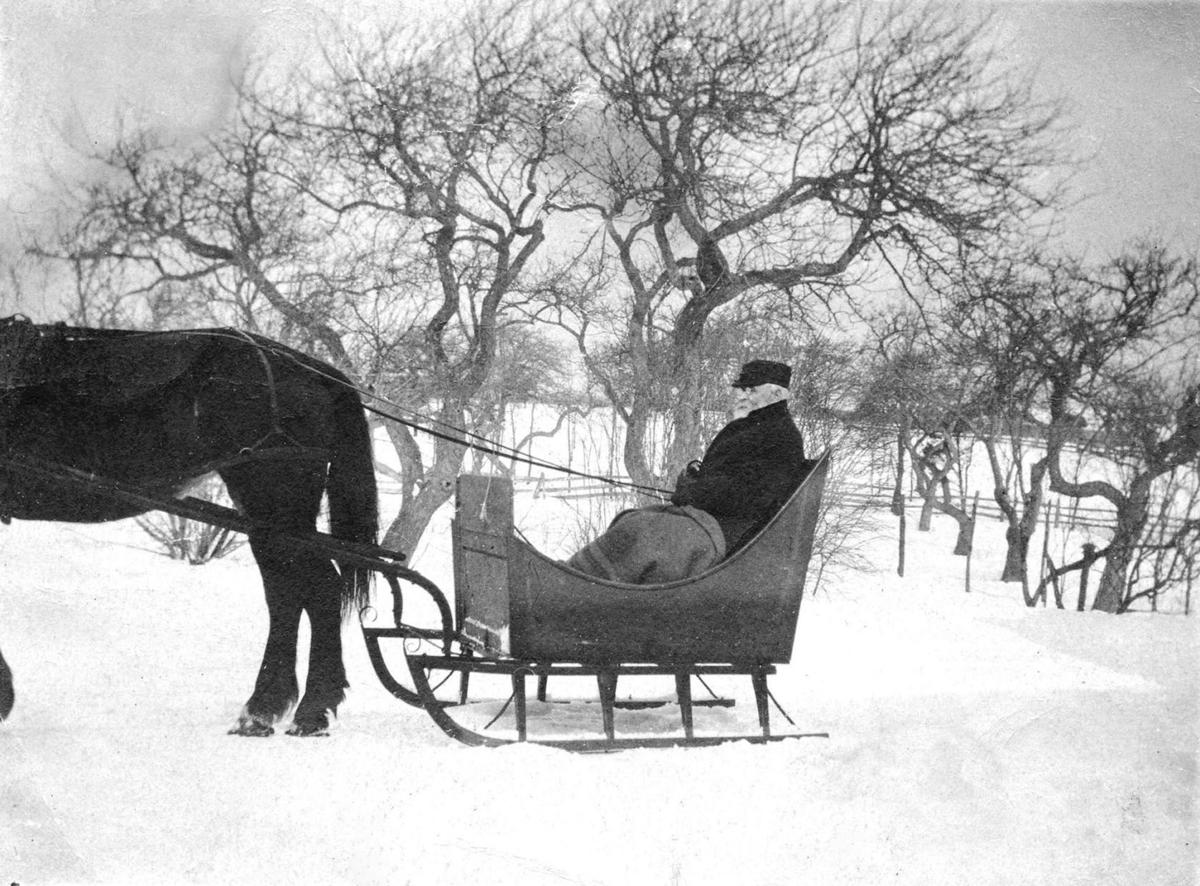 In this photograph, Sandwich resident Robert Armstrong rides in a sleigh, circa 1900, which is currently being restored. Pieces of the sleigh were recovered from an collapsed shed on an old farm in town that was up for sale back in 1997. 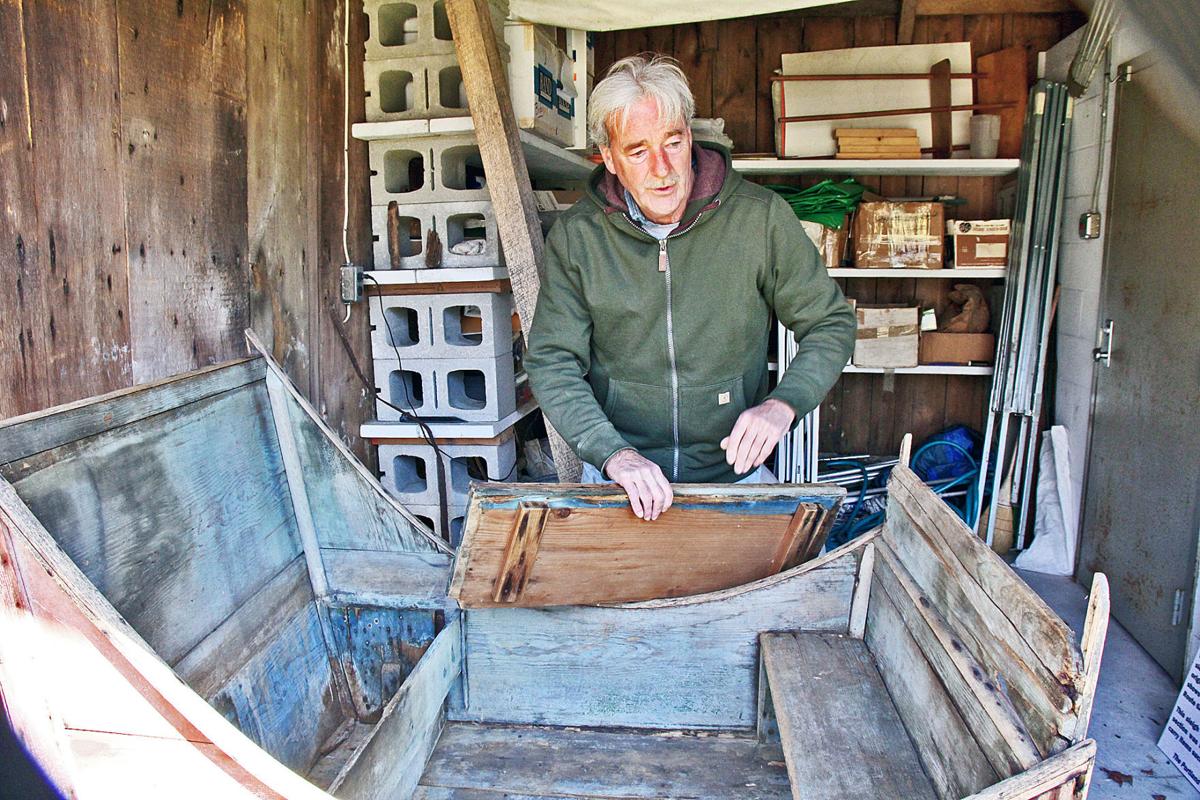 Historical archaeologist David Wheelock shows off the early 1800s wooden sleigh he is restoring this spring. 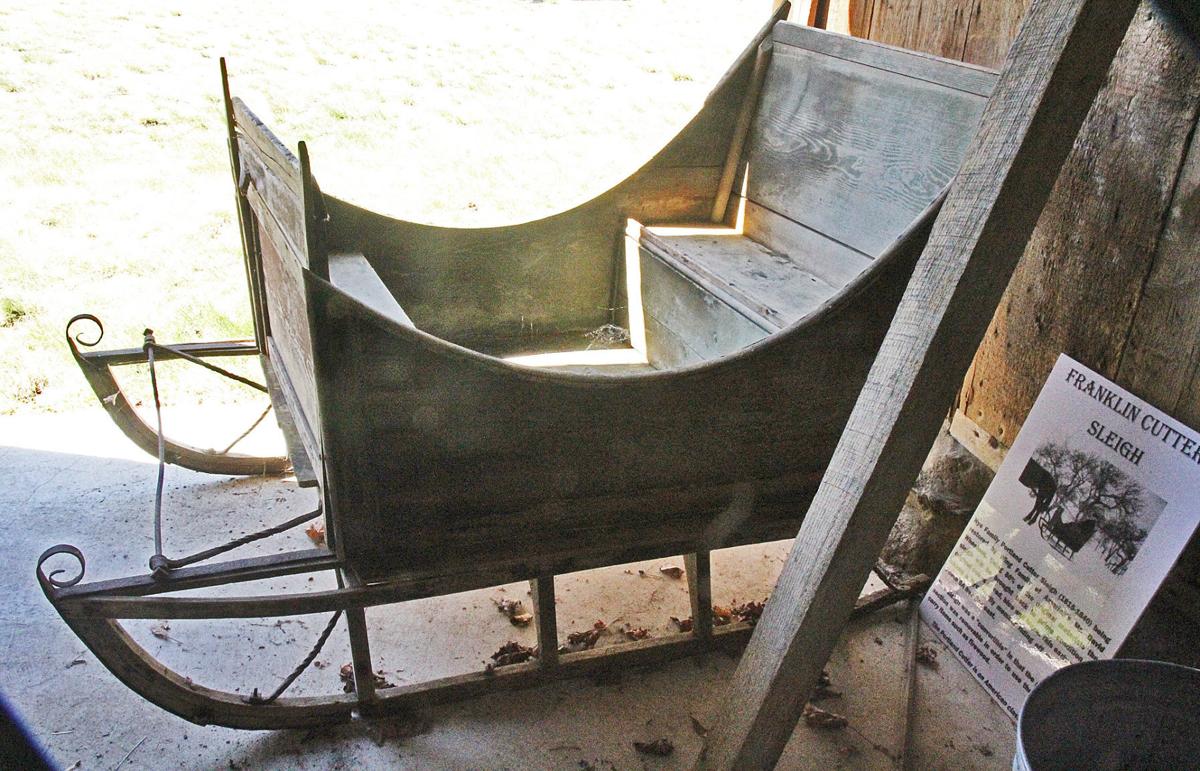 Once work on the sleigh is complete, it will be on display at the Benjamin Nye Homestead and Museum. 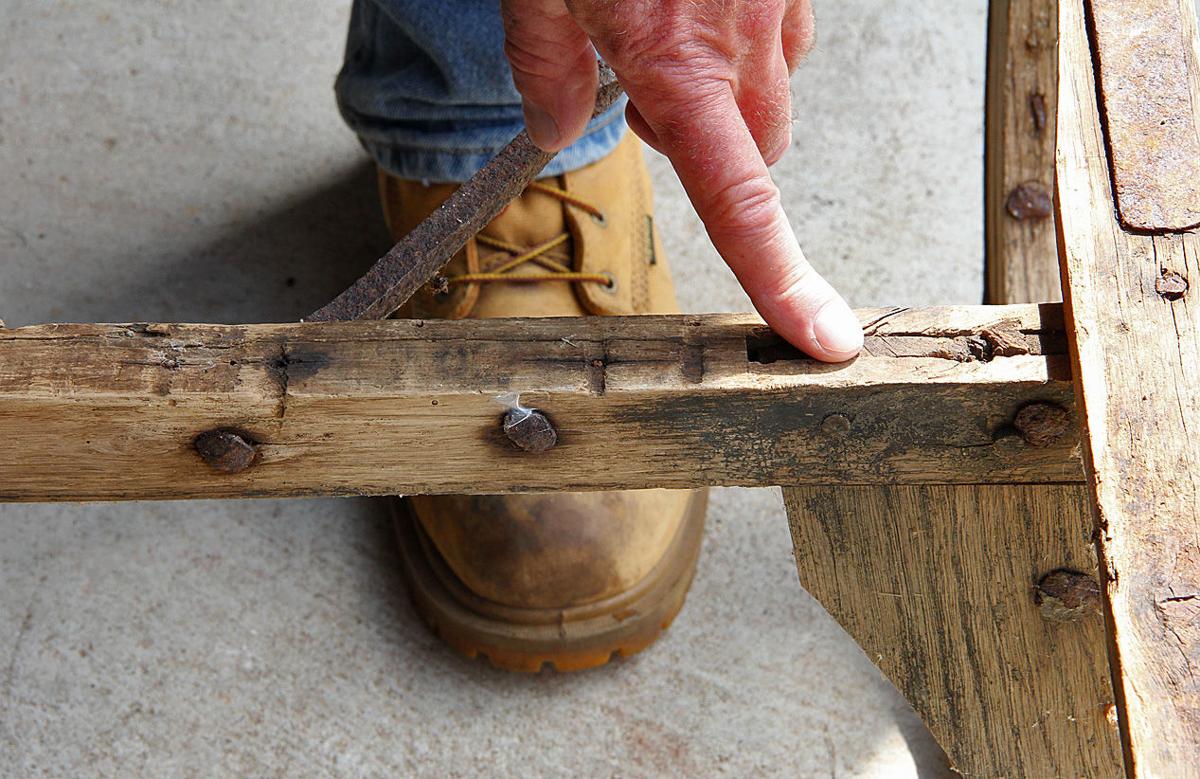 David Wheelock points out how the sleigh was constructed with wooden pegs and hand-cut nuts and bolts.

In this photograph, Sandwich resident Robert Armstrong rides in a sleigh, circa 1900, which is currently being restored. Pieces of the sleigh were recovered from an collapsed shed on an old farm in town that was up for sale back in 1997.

Historical archaeologist David Wheelock shows off the early 1800s wooden sleigh he is restoring this spring.

Once work on the sleigh is complete, it will be on display at the Benjamin Nye Homestead and Museum.

David Wheelock points out how the sleigh was constructed with wooden pegs and hand-cut nuts and bolts.

In the first mild weather of spring, after the northeaster storms of early March, historical archaeologist David S. Wheelock threw open the doors to a shed attached to the Wing Fort House on Spring Hill Road in East Sandwich and let the antique wooden sleigh he had stored through the winter see the light of day.

The well-worn, square-bodied sleigh, which dates back to the early 1800s, came to Mr. Wheelock’s attention as he was working to repair the old grist mill next to the Grange Hall next to the Benjamin Nye Homestead and Museum on Old County Road.

The bottom of the sleigh was found intact; the rest was in pieces.

Currently stored with the sleigh is an enlarged photograph, circa 1900, of Sandwich resident Robert Armstrong, son-in-law of Solomon Hoxie and great-great-grandfather of local historian John Nye Cullity, riding in that very horse-drawn sleigh along Route 6A.

It was John Cullity, who is executive director of the Nye Family Association, who originally found the sleigh in pieces and retrieved it from a collapsed shed at Meadow Spring Farm in 1997 when the farm was about to be sold.

“Though I had rescued and stored the sleigh, I never knew quite what to do with it,” Mr. Cullity said. “It was like a skeleton of something precious that I couldn’t bring myself to throw away.”

“The circa 1900 photograph gave it wonderful meaning, but the artifact was in ruins,” he said, adding that Mr. Wheelock’s offer to restore the sleigh was a “wonderful outcome.”

“It is rare to find one of these sleighs that predates 1840,” Mr. Wheelock said. This is a working Portland Cutter convertible sleigh of the kind heavily used in its day, he said, which most often did not survive the ages.

“Someone stuffed this one away,” he said.

“Cutter” is an American name for a light sleigh with a single-seat board that appears to have been first used in about 1800, according to the Carriage Association of America website.

The Portland type was square bodied, with a curved dash attached to the upward sweep of the runners. The design is attributed to Peter Kimball, a wheelwright and carriage builder in Maine, the website states.

The early Portland Cutter sleighs were so popular that other sleigh-makers copied them. By the 1850s, however, they morphed into exotic giant sleighs with a fancy curved front, Mr. Wheelock explained.

Small in stature at approximately 4 feet-by-5 feet, the convertible Cutter sleigh sat a driver and two or three passengers. By taking the top off, the sleigh became a sled for hauling wood or other heavy objects.

Noting the contrast in size between the very large horse and the very small sleigh in the photograph, Mr. Wheelock commented on how fast those sleighs must have gone when pulled.

When the sleigh was collected from the crumbling farm site, its pieces were so covered in animal feces and cobwebs that they looked black, and there was some debate as to whether the sleigh was salvageable.

Undeterred, Mr. Wheelock spread everything he could find of the sleigh, including one of the four wooden wedges used to hold the convertible top on, upon the lawn and spent a day with a scrub brush and pail of soapy water, cleaning each piece.

When the scrubbing was finished, he could see the sleigh’s original colors of red, blue, blue/green, and black.

Mr. Wheelock then reassembled the sleigh. He noticed a black, oily substance under the driver’s bench and realized it was tallow stains from years of the drivers’ boots rubbing against the wood. Tallow was once used as waterproofing grease.

These historic tallow stains will be left untouched when he repaints the rest of the sleigh, he said.

“It is so simple a design; it’s a neat little sleigh with a story to tell and so much history behind it,” Mr. Wheelock said. “I’m happy to be part of it.”

He estimated that 80 percent of the original materials will be used to restore the sleigh to prime condition with its original colors.

All of the ironwork is salvageable except for the bottom of the runners. The nuts and bolts on the sleigh are hand-cut. If Mr. Wheelock can get them apart in one piece, he will use them, he said. The wrought iron braces will also be reused.

Before taking the bottom of the sleigh apart, Mr. Wheelock will draw and photograph the runners to make a schematic of them. The schematic will capture the curve of the runner, which will release when the pressure comes off them as the antique is taken apart.

Finding the sleigh—and the photograph of it being used by a local Sandwich man—was historically fascinating, and the restoration project will add another piece of history to the story: white oak will be built into the sleigh that was sawed by Mr. Cullity’s grandfather 100 years ago.

Pointing to a 14-foot-tall solid plank of that oak, Mr. Wheelock said he will use it to make new runners for the sleigh and one-inch oak braces.

To do this, Mr. Wheelock (a former boatbuilder) will “mill out” the wood, and build a steam box in which to curve the runners.

“I can’t wait to see it finished,” Mr. Wheelock said of the project. “It will be striking when the exterior colors are restored. It will really be something to see.”

Mr. Wheelock hopes to finish the sleigh restoration by mid-June in time for the seasonal opening of the Nye Homestead, where it will be displayed.