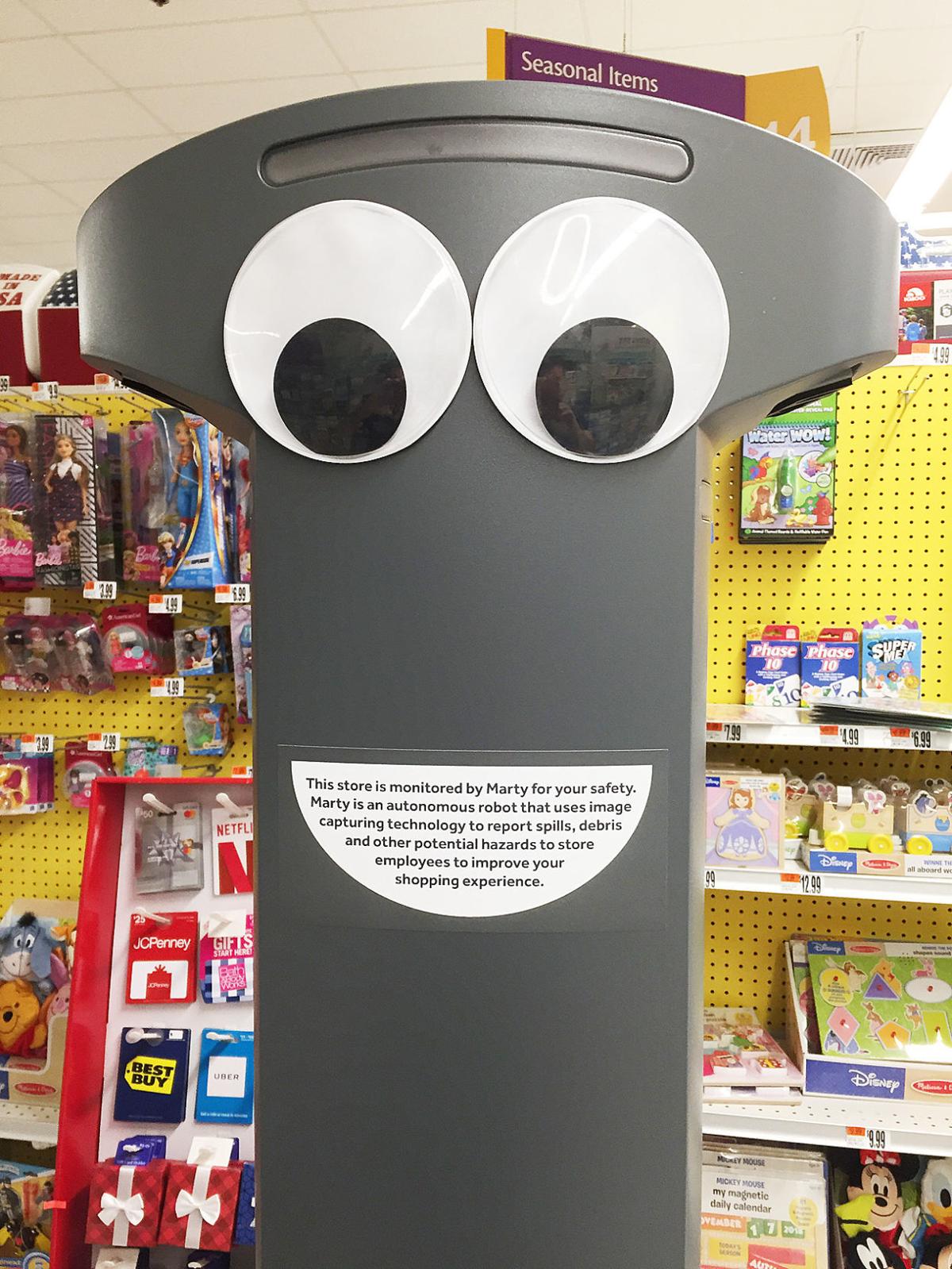 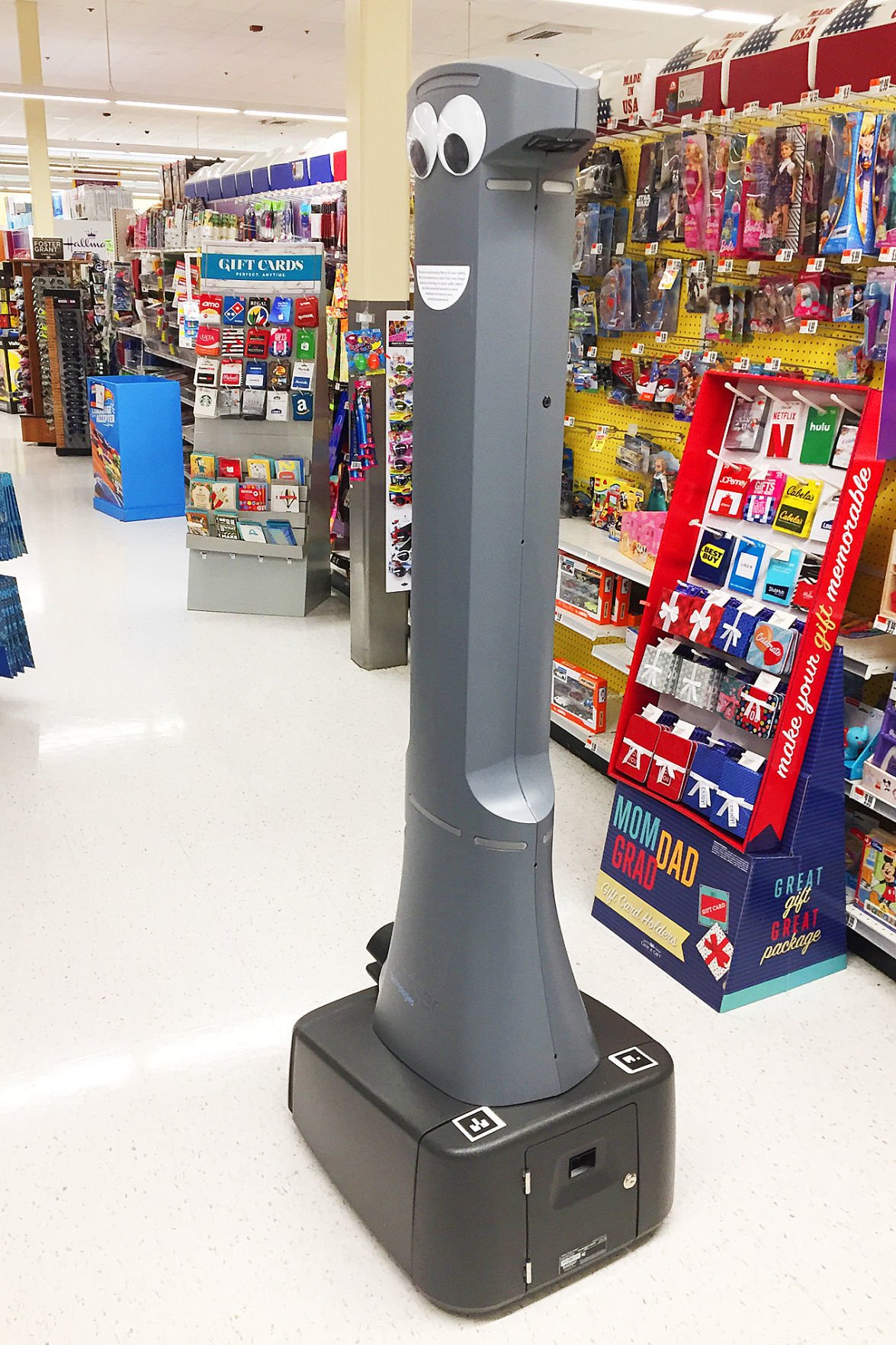 Marty, the 6-foot-tall robot, began roaming the aisles at the Route 6A Stop & Shop Wednesday. The pillar-shaped, googly-eyed autonomous robot’s task is to look for spills or other items on the floor that could be a slipping or tripping hazard for customers. An employee said the store has had Marty since the first of the year but only just got him set up. Identical robots are on patrol at Stop & Shops throughout the region.

Marty, the 6-foot-tall robot, began roaming the aisles at the Route 6A Stop & Shop Wednesday. The pillar-shaped, googly-eyed autonomous robot’s task is to look for spills or other items on the floor that could be a slipping or tripping hazard for customers. An employee said the store has had Marty since the first of the year but only just got him set up. Identical robots are on patrol at Stop & Shops throughout the region.

Robots have been spotted patrolling the aisles of Stop & Shop stores throughout the Upper Cape, but there is no need for alarm—the mechanical helpers are not looking to dominate the supermarkets, only to decimate hazardous spills.

The robots, named Marty, began their rollout in stores owned by Ahold Delhaize USA at the beginning of 2019. This includes Stop & Shop, Giant and Martin’s.

The machines are about six feet tall, but have been outfitted with googly eyes in an effort to look less intimidating.

While gliding around the aisles of the supermarket, Marty is responsible for finding any spills that may have occurred. If one is found, Marty sends an announcement over the store’s intercom to alert a human employee that something needs to be cleaned up and where to find the mess. Marty’s digital female voice sounds almost human, in the same way that Amazon’s Alexa or Apple’s Siri does.

Marty is able to identify liquid, powder and larger food item spills. When it identifies a spill, it stays at the scene until a human employee pushes a button to let it know that the spill has been cleaned.

According to a news release, the intention behind dispatching the Marties is twofold. First is that any spills are able to be efficiently cleaned so that the stores are cleaner and customers are safer. Second, human employees are able to spend less time searching for spills and more time interacting with customers.

So far on the Upper Cape, Marty has been spotted in the Route 6A Sandwich location and the Teaticket Highway Falmouth location. Employees report that customers have been charmed by the robots, taking photos, videos and selfies with them.

Even though Marty’s eyes are stuck on, it is able to sense when there are people or carts in its way by the use of laser-based “lidar” sensors. The robot also has a series of eight cameras that can be used to keep track of inventory on shelves.

A manager from the Falmouth Stop & Shop said her staff has been adjusting to working with the robot, but declined to comment further on Marty. A call to the store’s corporate office was not returned by press time.

An employee at the Sandwich store said many customers find Marty a curiosity, but noted that a few curious children have been startled when Marty begins speaking.