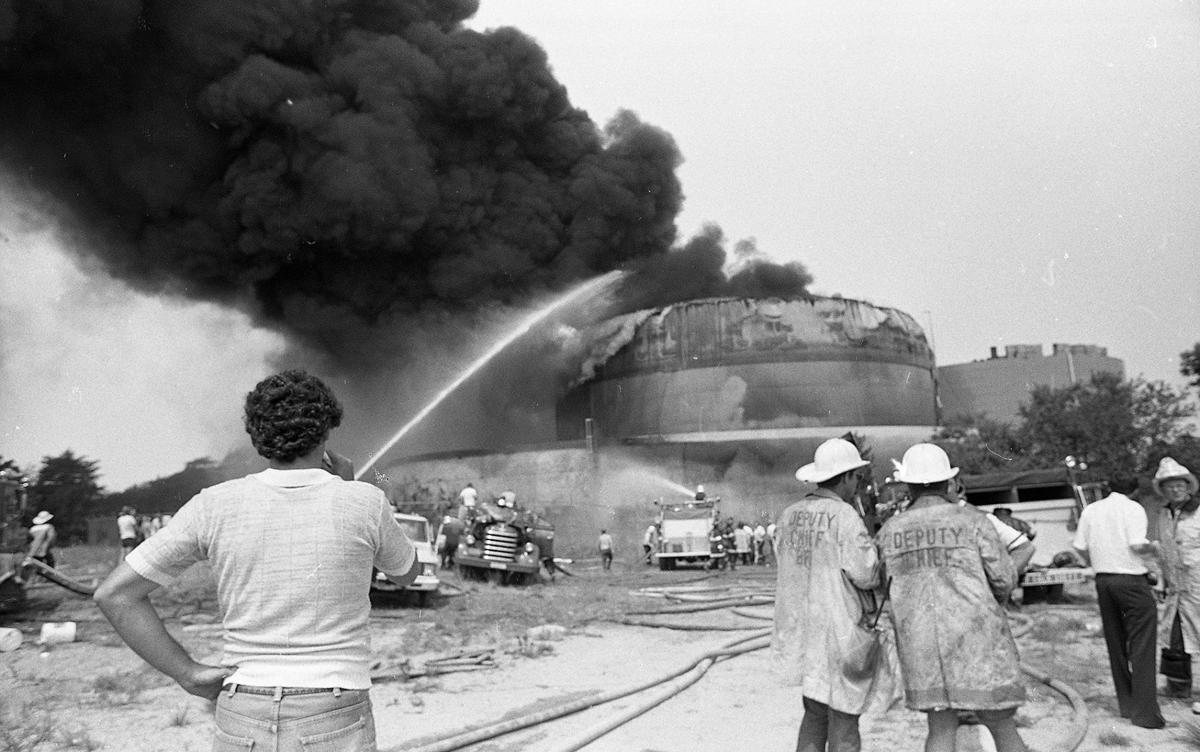 Thick black smoke billows into the air as fire crews battle a massive blaze at the fuel tank farm next to the Canal Electric Plant on August 5, 1980. 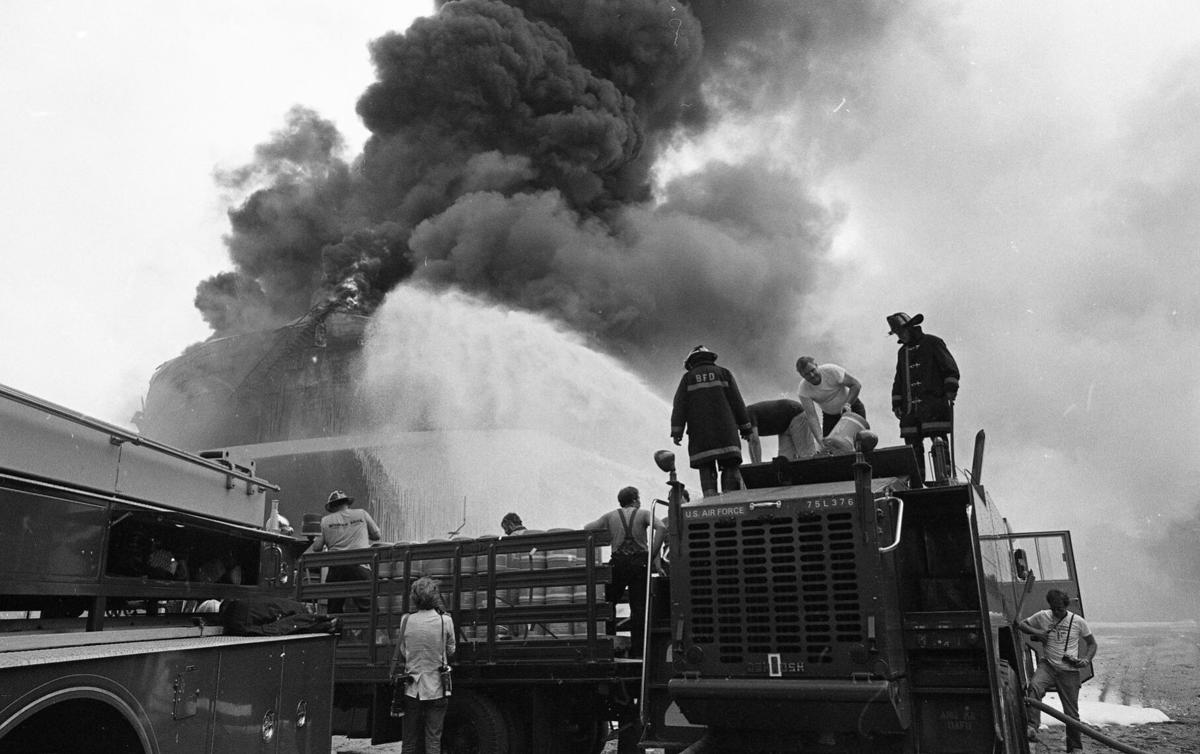 More than 200 firefighters use water and foam to douse the flames, which some at the scene had expected to burn for a week. 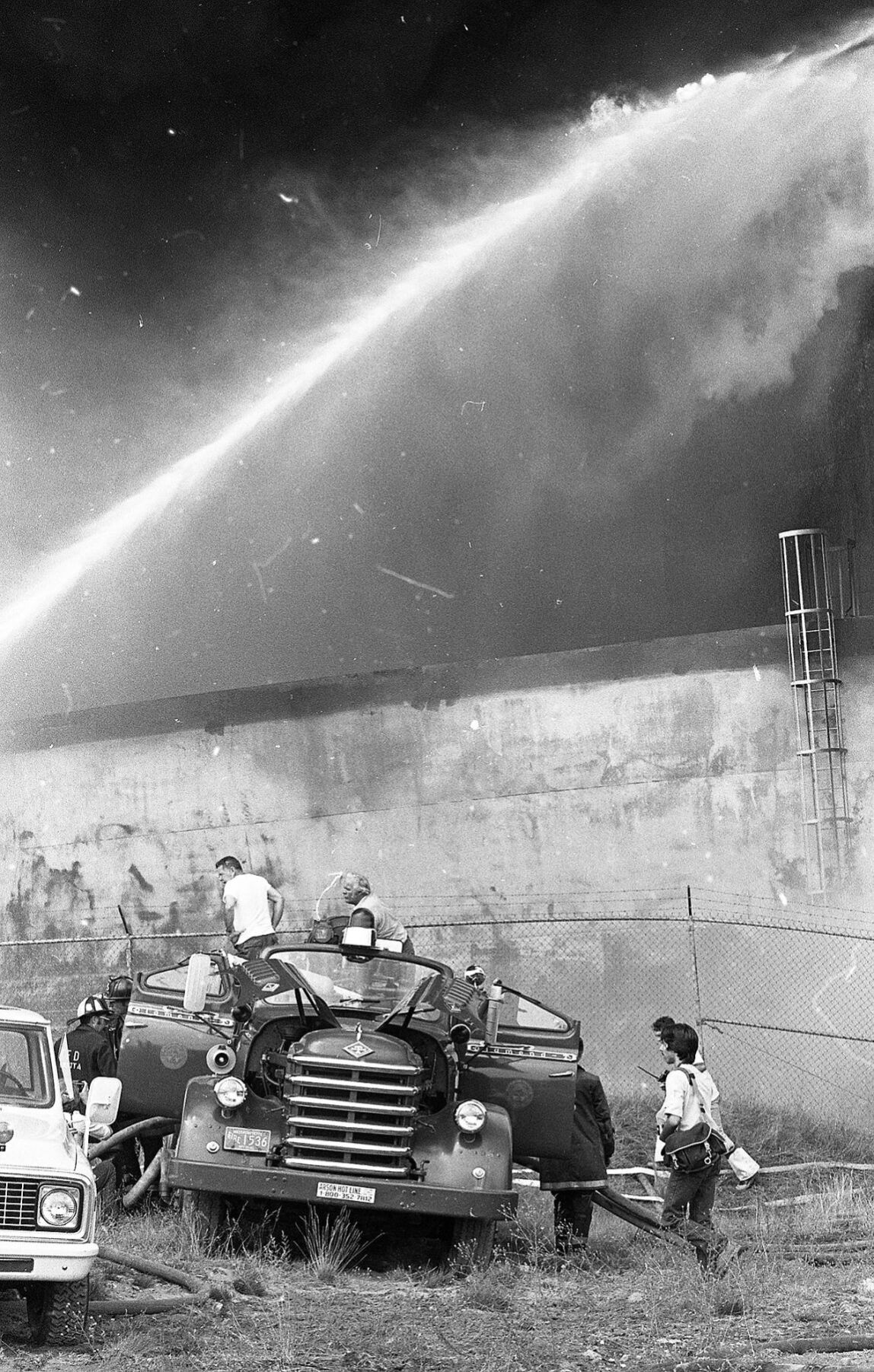 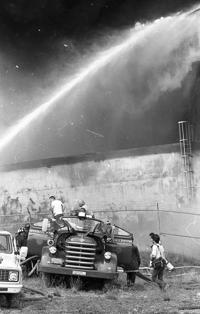 Despite being one of the larges fires in the history of the Sandwich Fire Department, no serious injuries were reported. 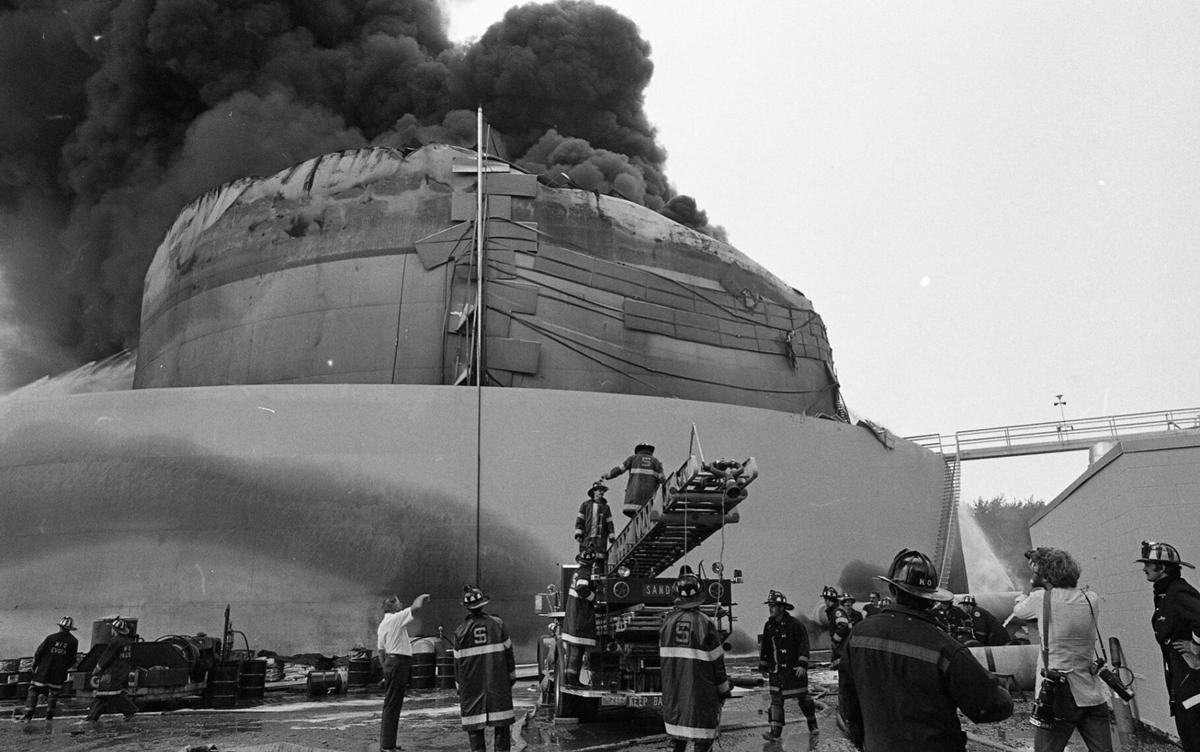 The fire was started by a work crew pin-welling insulation onto the tank. 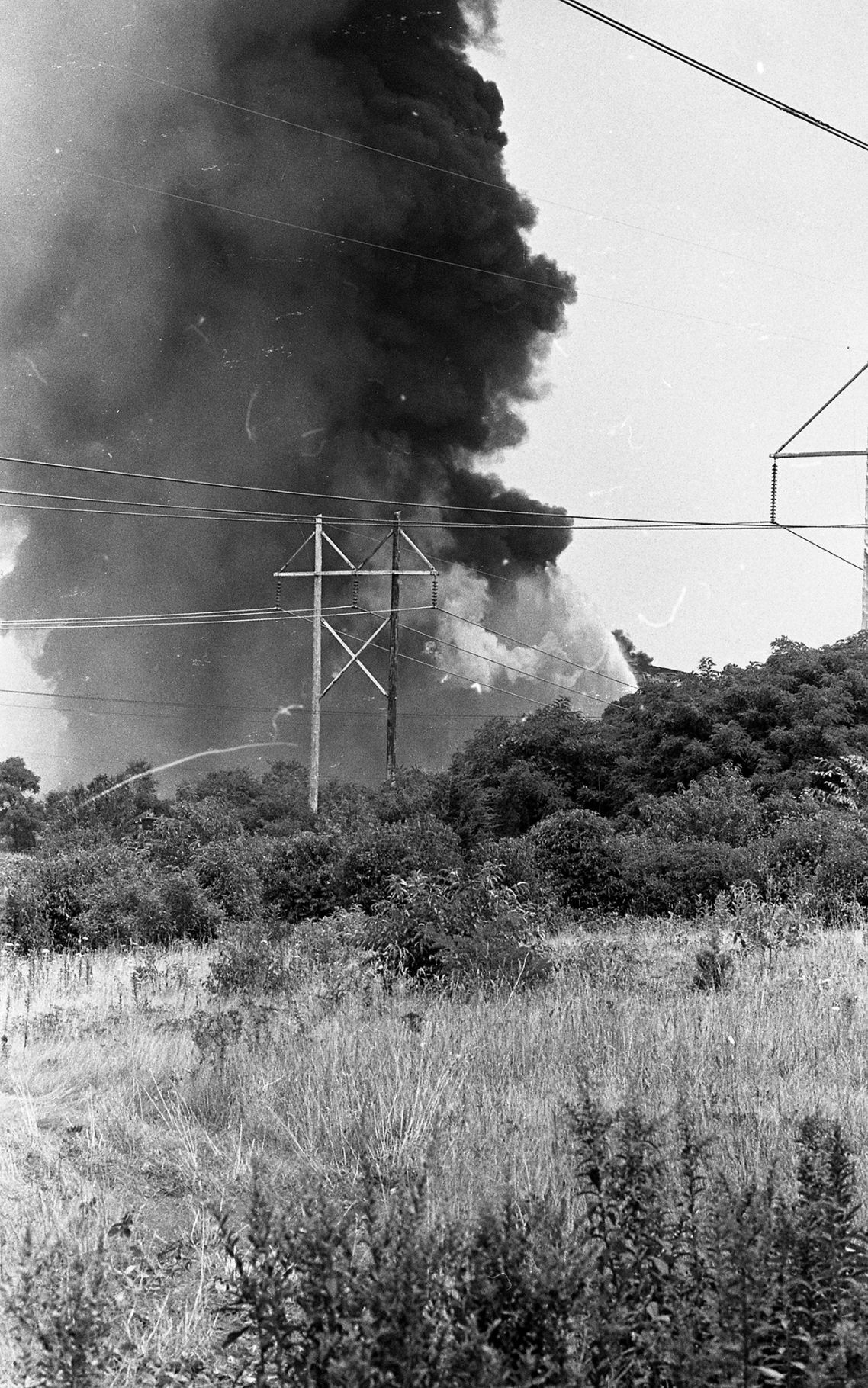 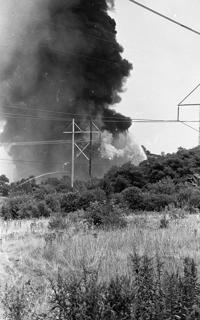 A view of smoke from Route 6A. 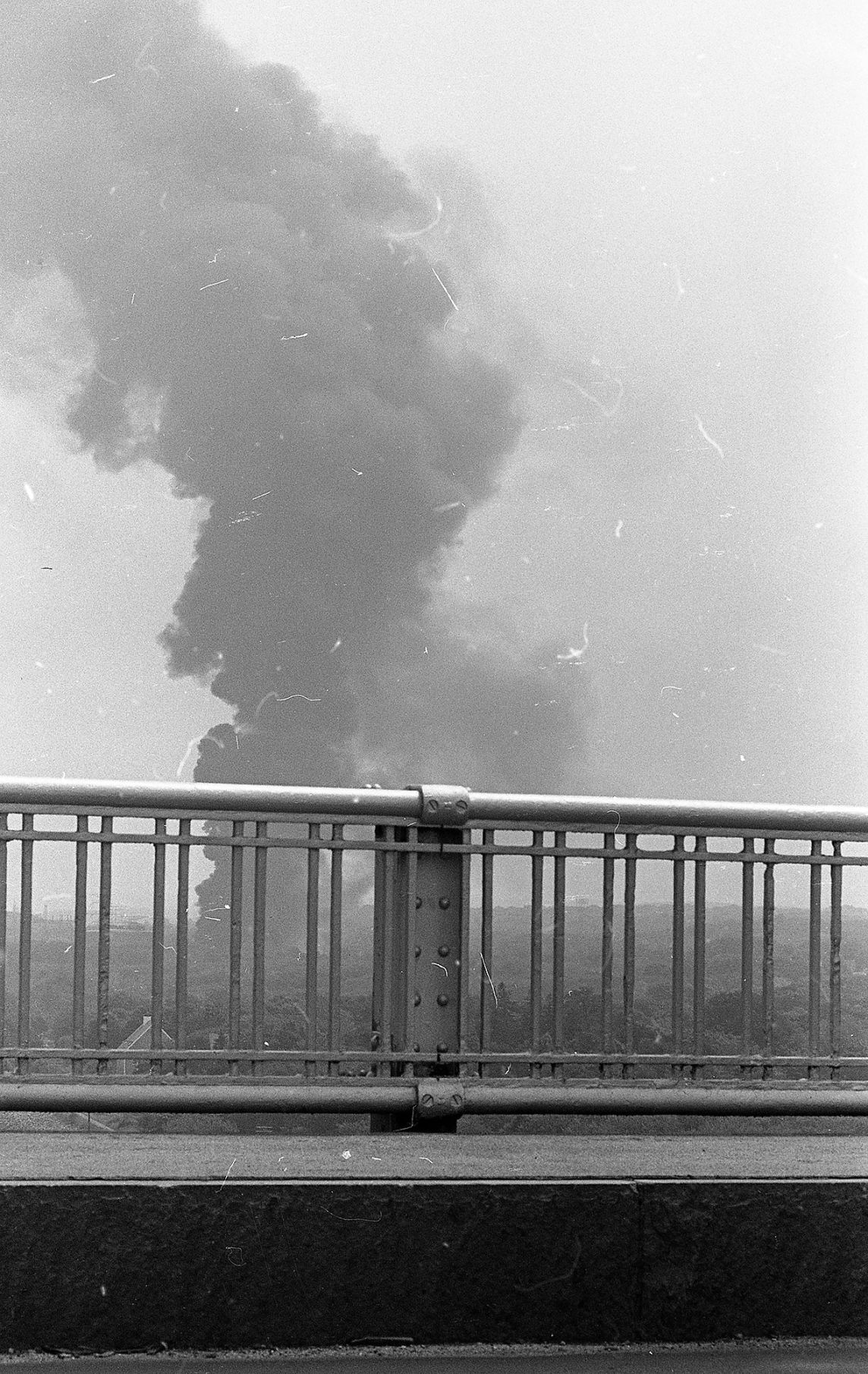 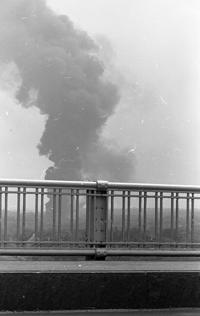 The smoke could be seen for miles. This photograph was taken from the Sagamore Bridge.

Thick black smoke billows into the air as fire crews battle a massive blaze at the fuel tank farm next to the Canal Electric Plant on August 5, 1980.

More than 200 firefighters use water and foam to douse the flames, which some at the scene had expected to burn for a week.

Despite being one of the larges fires in the history of the Sandwich Fire Department, no serious injuries were reported.

The fire was started by a work crew pin-welling insulation onto the tank.

A view of smoke from Route 6A.

The smoke could be seen for miles. This photograph was taken from the Sagamore Bridge.

It was just after 9 AM and already the temperatures were in the 90s.

A work crew was pin-welding insulation onto a gigantic 5-million-gallon fuel storage tank in the tank farm next to the Canal Electric Plant.

But the crew had not properly grounded the tank before they began work. That mistake would cause one of the largest fires the Sandwich Fire Department has ever battled.

Forty years have passed since that massive tank farm fire but the the events of the day are still fresh in the memories of the Sandwich firefighters who battled the blaze.

Former Fire Chief Dennis Newman, who was a lieutenant at the time, said that the day became known as Torrid Tuesday among those who were there.

Chief Newman was off duty that day spending time in Falmouth with his son when he heard the call come in on the portable radio he kept in his truck. Chief Ferdinand (Freddie) Alvezi was calling for all the mutual aid he could get.

Chief Newman immediately called the station to find out what was up.

“The secretary at the time, Lois McLaughlin, she said, ‘I don’t know how bad it is, but it’s really bad,’” he said.

Chief Newman made the decision to drop his son off with his mother and help fight the fire.

Deputy Fire Chief Timothy McMahon was a 20-year-old firefighter at the time. He said that he had been running an errand with a friend when the fire broke out.

“Obviously we saw the smoke because you could see it miles away,” he said.

Deputy Chief McMahon said that the department had a detail crew on site when the fire broke out. That crew, as well as employees from the plant, called the fire in.

Somehow, the welding crew on the tank managed to get away with only minor burns, Chief Newman said.

The resulting fire was a force to be reckoned with and is among the top three or four largest conflagrations Sandwich firefighters have ever had to deal with, the others being brush and forest fires.

Deputy Chief McMahon said that there has not been a fire of that magnitude in town in the years since.

Mutual aid was brought in from departments across Cape Cod and the entire state. Aid was even brought in from Providence, Rhode Island. Deputy Chief McMahon said that about 23 fire departments provided aid, either at the scene or through station coverage.

He said that at least 200 firefighters eventually were on scene fighting the spreading flames.

More than 4,000 gallons of foam were brought in to contain the flames and more than 100,000 gallons of seawater was pumped in from a barge doing dredge work in the Cape Cod Canal.

The Bourne Fire Department sent their 85-foot ladder truck, but the truck had a mechanical issue so they had to make do with Sandwich’s 65-foot ladder.

As the hours went by and the flames and billowing black smoke continued, Deputy Chief McMahon said that he remembers hearing fire chiefs at the scene talking about how they expected the fire to last for a week.

Chief Newman said there was a real concern that the fire could eventually lead to a massive explosion. An expert on flammable liquids, he said that the danger with large oil tanks, especially with No. 6 bunker oil that was in that particular tank, is there is always a little bit of water inside.

When water is heated, it can expand 1,700 times to become steam. In a burning oil tank, this can result in a BLEVE, or boiling liquid expanding vapor explosion.

Fortunately, that did not happen.

One aspect that stands out about Torrid Tuesday to both Chief Newman and Deputy Chief McMahon is the heat that day.

Chief Newman said that a doctor from Cape Cod Hospital, Dr. Lloyd H. Bremmer, managed to commandeer a boat and fill it with ice and water.

“We were literally dunking firefighters in the boat to cool them off,” Chief Newman said.

Deputy Chief McMahon said that he remembers Chief Alvezi sitting in the boat.

In the end, due to the skill of the firefighters and maybe a little bit of luck, the flames were brought under control before dinnertime.

Despite the magnitude of the fire, there were no serious or lasting injuries. Most of the medical issues that the firefighters suffered were due to the heat.

Chief Newman said that there was one member of the Sandwich Fire Department who they thought was having a heart attack. He was flown by helicopter to Falmouth Hospital to be treated, but it turned out he was suffering from heat exhaustion and was able to return to work a few days later.

At least one other Sandwich firefighter was also taken to Falmouth Hospital by ambulance, but there were no serious injuries as a result of the blaze.

A month later, while the remnants of fire were being cleaned up, another fire broke out at the plant. This time, 20 firefighters were hospitalized for smoke inhalation, Chief Newman said.

Deputy Chief McMahon said that the second fire started when a piece of hot steel fell into some residual oil that was left in the destroyed oil tank.

Chief Newman was not at that second fire, but said that none of the firefighters were seriously injured that day and that the fire was taken down quickly.

Deputy Chief McMahon said that what stands out for him during that second fire was standing with several other firefighters on the hose line and hearing someone ask if they could help.

He looked around and saw the Reverend William Morris of Corpus Christi Parish standing there in his white helmet, jacket, and boots.

“He said, ‘Timmy, what do you want me to do?’” Deputy Chief McMahon said, “Father, grab the line and get behind me.”

Chief Newman said that even though he was not on duty on Torrid Tuesday, he rushed to the scene because he wanted to be involved in the response. He said that firefighters are a little strange that way. When other people are running out of a burning building, they are running into it.

“When you’re a firefighter, nobody wants to be left out,” he said. “Big fires only come once in a while. We want to help out our brothers and sisters and get the job done.”

Had to chuckle at Dennis Newman's comment about not wanting to be left out.....My Dad was a retired Firefighter living just across the street from the tank fire that day and boy did he want to go! They are a rare breed indeed. #HEROES