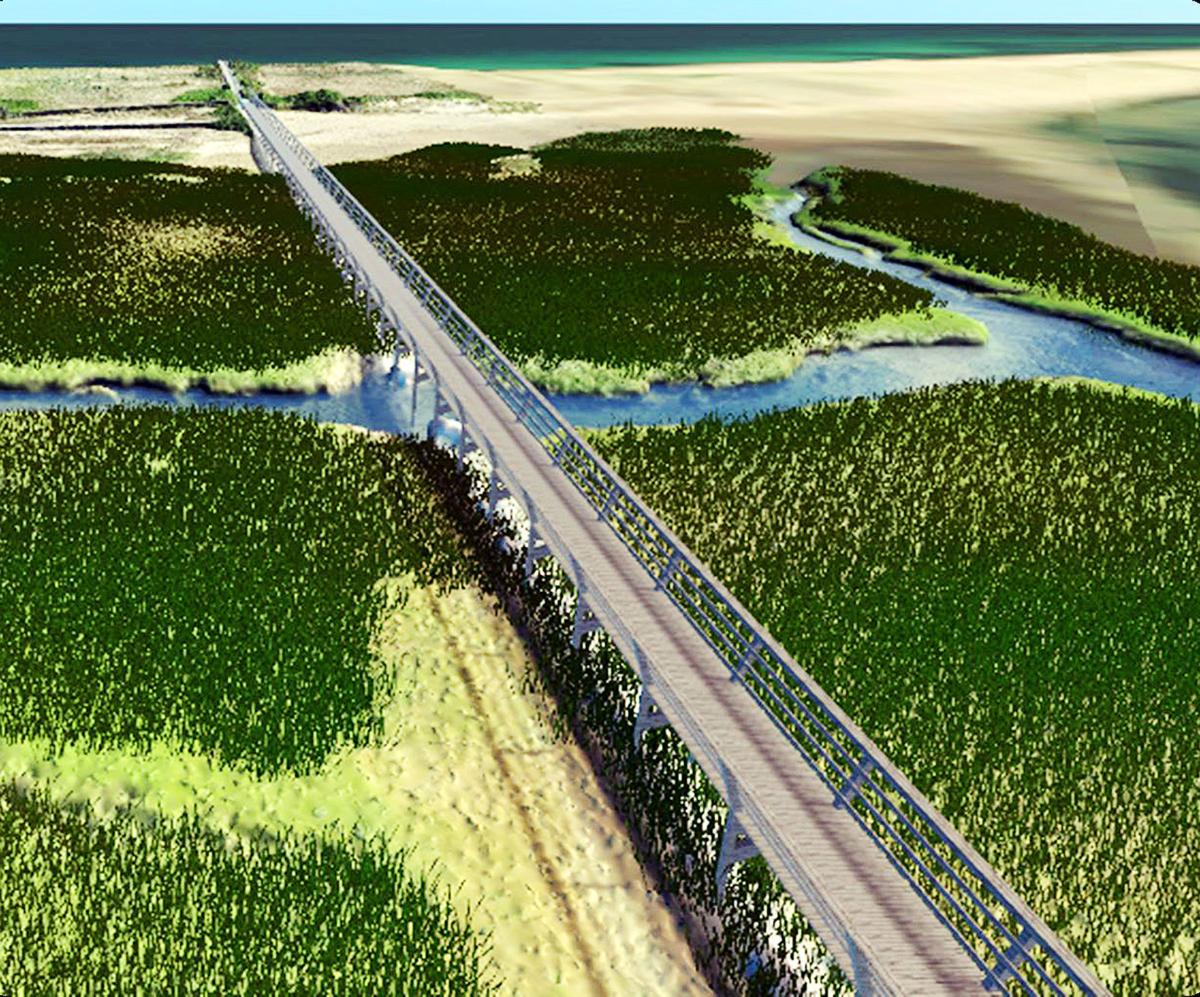 This rendering shows a new wider, taller boardwalk with angled railings along its entire length. 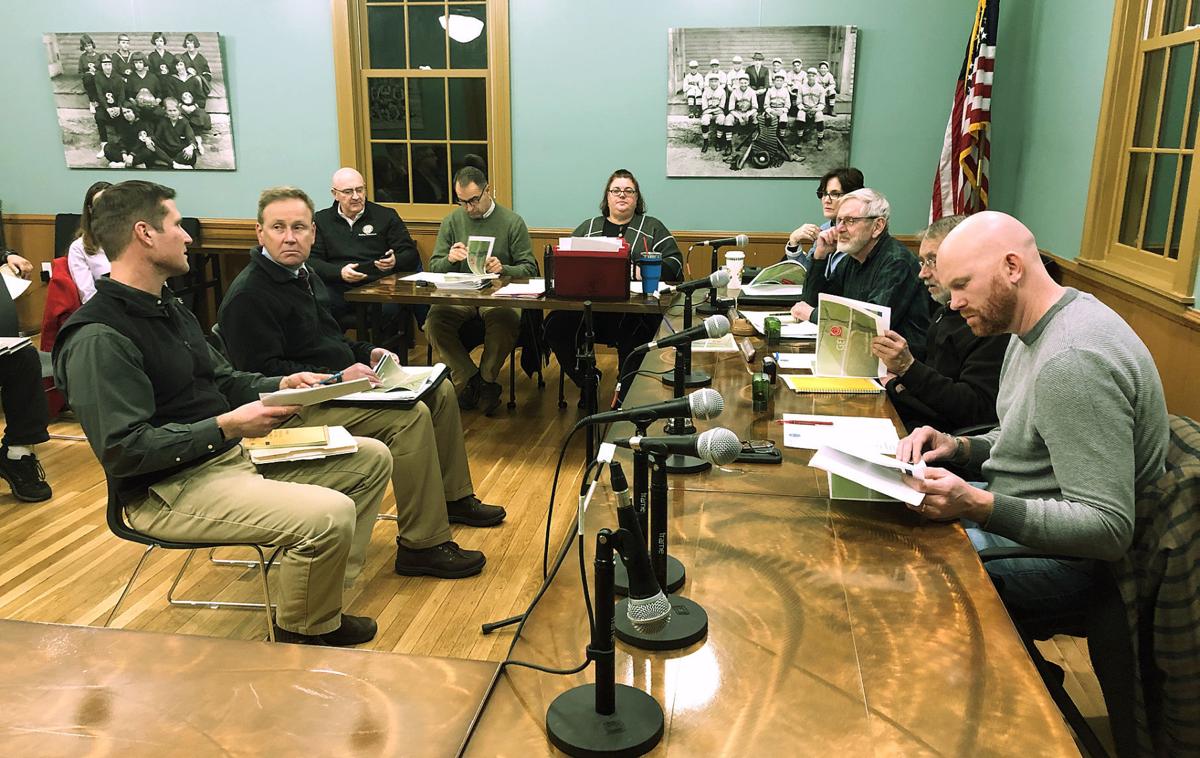 The new boardwalk design has placed the historic district committee in the middle of a classic Sandwich dilemma: Should historic character be scrapped to allow sturdier, more modern structures?

The redesigned boardwalk that stretches over the marsh—if approved—will be broader, taller and accessible to all. It will also, however, have heavy handrails and a much bigger visual impact than the minimalist iconic structure it will replace.

The designer, GEI Consultants of Woburn, brought the matter to the Sandwich Old King’s Highway Historic District Committee on Wednesday night, January 8, hoping for a brief, informal discussion on the procedure for obtaining the board’s approval.

William Collins, the acting chairman of the historic district committee said “renovation” of the existing boardwalk is not an accurate description.

“This is really a demolition and rebuilding, not a renovation,” Mr. Collins said. “When we have a historic structure, our process requires an application for a demolition permit.”

Although the discussion was informal and no vote was taken on Wednesday night, committee members asked questions and gave opinions to Russell Titmuss, an engineer with GEI Consultants.

The gist of the board members’ comments were summed up by committee member Ross Vander Pyl.

The structure has been fixed many times since the first one was built more than 100 years ago, Mr. Collins said. Although it has changed slightly every time it is rebuilt, the proposed new structure is a radical departure from last designs.

Mr. Collins added that the historic committee always asks two questions when someone wants to demolish a historic structure: Does it have to be demolished for health and safety reasons; and if so, can a very close replica be built?

Mr. Titmuss and Assistant Town Engineer Samuel Jensen had given an abbreviated presentation about the replacement boardwalk before being peppered with questions from the committee.

The existing boardwalk must be replaced because much of its underlying structure was ripped apart by a series of ferocious storms in March 2018.

At a recent community forum, GEI presented two options for the redesigned boardwalk, both of which featured safety railings and a wider walkway. The cost for reconstruction, Mr. Titmuss has said, is about $2 million.

Committee members asked some of the same questions that residents asked at the community forum. One of the first of those questions was whether youngsters will still be allowed to jump from the new boardwalk bridge.

Mr. Titmuss said the new bridge will be about two feet higher than the existing bridge and suggested that jumping be discouraged.

Such a prohibition is unlikely, town officials have said.

The town boardwalk across the marsh has existed in one form or another since 1875. As far back as anyone can remember, children—and adults—have jumped and fished off the wooden walkway.

Committee member Mary Foley suggested that a lower “fishing platform” be built for fishermen and jumpers.

Mr. Jensen said much of the structure must be replaced and such massive replacements trigger state building code requirements—such as handrails and wider boards.

Building Inspector Brendan Brides, speaking as a resident and advocate for people with disabilities, said the new design would be safer and would allow accessibility for all.

“The boardwalk shouldn’t just be available to the able-bodied. It should be open to everyone,” Mr. Brides said.

Committee members questioned how long the new boardwalk would last, what it would be made from, and whether engraved planks that townspeople purchased to help defray the costs of the last major boardwalk reconstruction could be reused.

The new boardwalk will be elevated about eight feet above the marsh level and anchored into the sand beneath the marsh’s peat floor with huge steel screws called helical piles. It is designed to last 40 years, Mr. Titmuss replied.

It will be made from wood, although there are options for the type of wood to be used, Mr. Titmuss said.

GEI conducted their months-long analysis of the boardwalk and came up with estimates based on the costs of treated lumber, Mr. Titmuss said. He added, however, that tropical hardwood, which is much stronger, could be used but it would be more expensive.

The consultants recommend a six-foot-wide deck, which would allow pedestrians to pass each other comfortably and would allow access for a specialized emergency vehicle.

It would also include wider boardwalk areas, or turnarounds, that would allow pedestrians to pause and look out over the marsh.

Because the new structure’s elevation over the marsh would be increased by four to five feet—lifting the structure to seven or eight feet above the marsh—railings are an absolute necessity for safety, GEI and town officials have emphasized.

Mr. Titmuss has said there are two options for the railing.

The vertical option would include metal mesh sides. The sloped option would be all wood, according to the photos and artists’ renderings.

The sloped railing, similar to one used at the National Seashore, would preserve more of an open feeling, Mr. Titmuss has said. He added, however, that the railings would not be tilted at too-extreme an angle.

“They will not be sloping out so much that you feel like you’re going to fall over if you use the rails,” the consultant has said.

The engraved planks could be preserved and made into something else to memorialize the previous boardwalk reconstruction or they could be given back to the townspeople who donated them, the consultants and town officials said.

The timeline for the construction from start to finish is 26 months, Mr. Titmuss has said. The design would take three to four months, the permitting six to nine months, and bidding and construction eight to 10 months, he has said.

Many permits would be required before the work could get underway. These include local, state and federal permits from environmental and historical regulatory agencies, as well as the US Army Corps of Engineers, according to GEI’s report.

Mr. Titmuss has said much of the work could be completed in the off-season months.

“We are delighted you came to get our point of view,” Mr. Collins told the designer and the assistant town engineer. “Sometimes things get developed to a point where we have no input. I’m glad it’s at the design stage.”

Mr. Collins said after the meeting he was looking forward to the historic committee’s public hearings on the new boardwalk.

“I think members of the community need more opportunities to talk about this and ask questions,” he said. “It’s a very emotional issue.”

Send Boardwalk Designers Back To Drawing Board - Editorial

I've Always said , Get 3 Quotes and or Designs when doing a Project , & Yes ! Less is More ! and you will Never stop Jumping ,C'mon ! it's Part of the Ritual