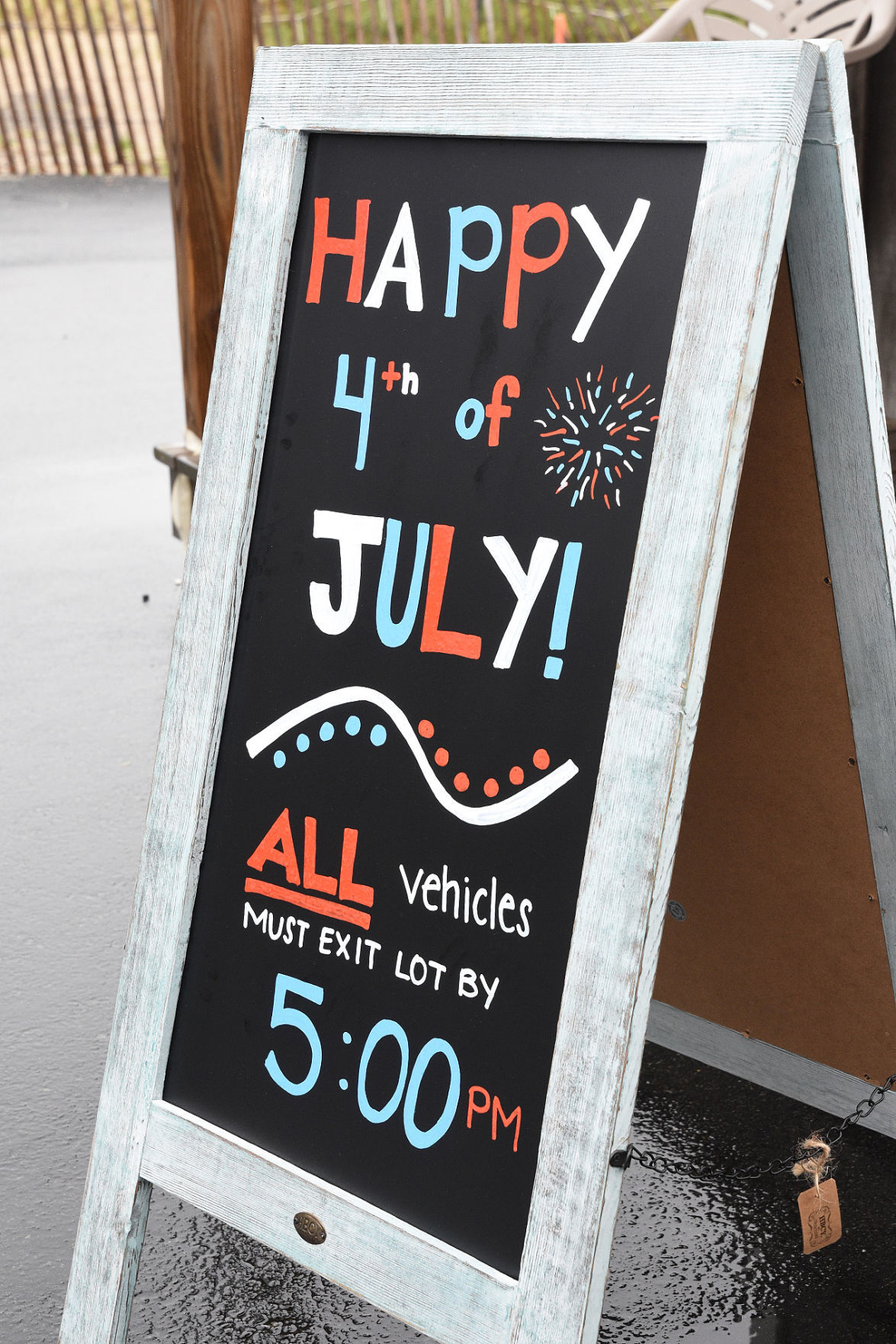 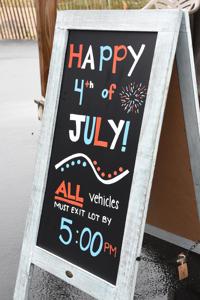 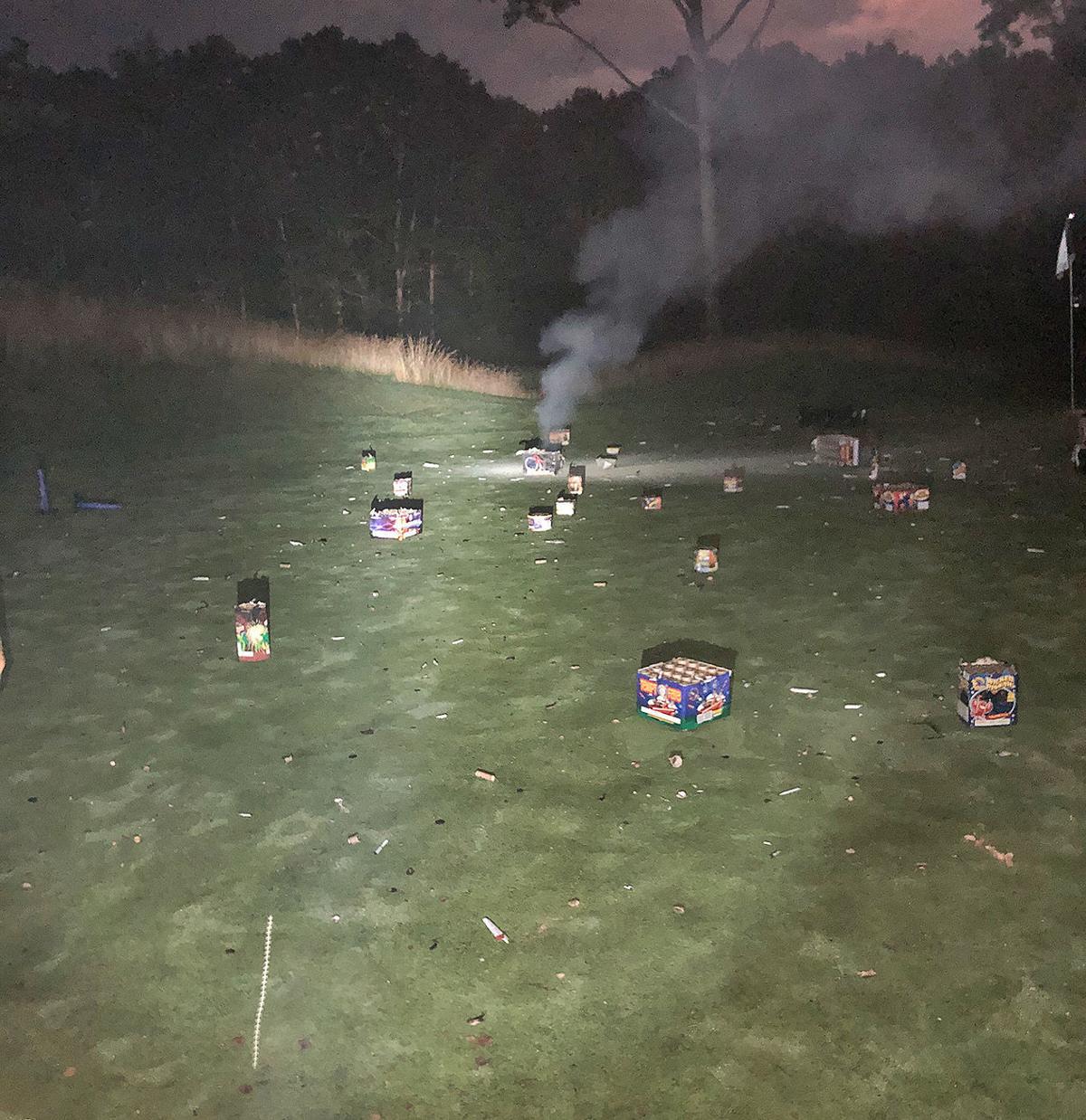 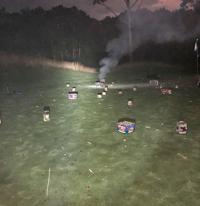 Smoldering debris left behind after a July 4th fireworks display caused an estimated $24,000 worth of damage at the Ridge Club.

Smoldering debris left behind after a July 4th fireworks display caused an estimated $24,000 worth of damage at the Ridge Club.

Closing parking lots and stepping up patrols along the shore succeeded in keeping illegal fireworks off fragile beach dunes in Sandwich, but complaints about thunderous private parties all over town kept police busy throughout the July 4th holiday weekend.

The most serious fireworks incident on July 4th caused an estimated $24,000 in damages to the 7th hole at the Ridge Club in East Sandwich. The police, responding to a report from neighbors, found that a personal fireworks display had burned areas of the green and left debris everywhere.

Police charged a 30-year-old neighborhood man with destruction of property, possession of illegal fireworks, and disorderly conduct. The man’s name has not yet been released.

The police log from the holiday weekend is peppered with other incidents, including the destruction of a mailbox by firecrackers and many, many complaints about illegal fireworks and loud parties.

“The personal fireworks, especially on private property, are very difficult to control,” Town Manager George H. (Bud) Dunham said this week. “We did our best, but some of it is inevitable.”

“It is challenging for any law enforcement agency to address all July 4th fireworks violations as they are frequent and continual in numerous locations throughout the holiday period,” the police chief said this week.

Although personal fireworks are illegal in Massachusetts, people drive out of state to purchase them, bring them back, and set them off, Chief Wack said.

“This matter would be best addressed through full compliance with Massachusetts fireworks laws during the holiday period,” Chief Wack said. “This would eliminate the need for the police department to spend additional funds increasing our staffing to address illegal fireworks.”

Town officials did publicly ask residents to abide by the law of the commonwealth in a public announcement made late last week.

“We are concerned that with all the major events cancelled—the fireworks, parade, and road race—that some individuals will want to hold their own [illegal] celebrations,” Assistant Town Manager Heather B. Harper said last Thursday. “We are worried about public safety.”

To discourage beach fires and private fireworks, beaches and lots were closed at 5 PM. Extra patrols of police, fire, public works, recreation and natural resources department personnel kept watch around the beaches and other recreation areas.

“This year we deployed officers on ATVs [all-terrain vehicles] along the beach and nearby roads,” Chief Wack said. “Beach parking areas were closed down in the evening hours. We partnered with the fire department and deployed a FD/PD team on a UTV [utility terrain vehicle that accommodates more than one passenger] in the area of Town Neck Beach to address fireworks and fires, and added additional patrol cruisers.”

The gates to Oak Crest Cove recreation area were also closed at 5 PM.

The police chief, the town manager, and Natural Resources Director David J. DeConto, agreed this week that the increased patrols and other measure taken this year by the town to protect public recreation areas were an unqualified success.

“Because of the extra patrols—and closing the beach parking lot gates at Town Neck, Oak Crest Cove and Ryder Conservation Area on the evenings of July 3rd and 4th—we had very little in the way of damage to the breaches, dunes or bird nesting areas,” Mr. DeConto said.

Personnel from the recreation and public works departments also pitched in to police protected areas and keep them free of debris, Mr. Dunham said.

“Our joint efforts with Fire, Police, DNR, Recreation, and DPW really worked well at Town Neck Beach, including the placement of a temporary dumpster on the site and closing the parking lots Friday and Saturday nights.”

Fire Chief John J. Burke said that although his department had many calls throughout the weekend, there were no fireworks or fire related incidents on public recreation areas.

“The police did most of the fireworks chasing in residential areas,” Chief Burke said.

“The Town Neck Beach patrols were a new addition to this year’s police operational plan,” he said. “We will continue to review our staffing needs and efforts to address public safety concerns in each of the years to come.”

Museumgoers Can Experience 'Interference' At The Cahoon