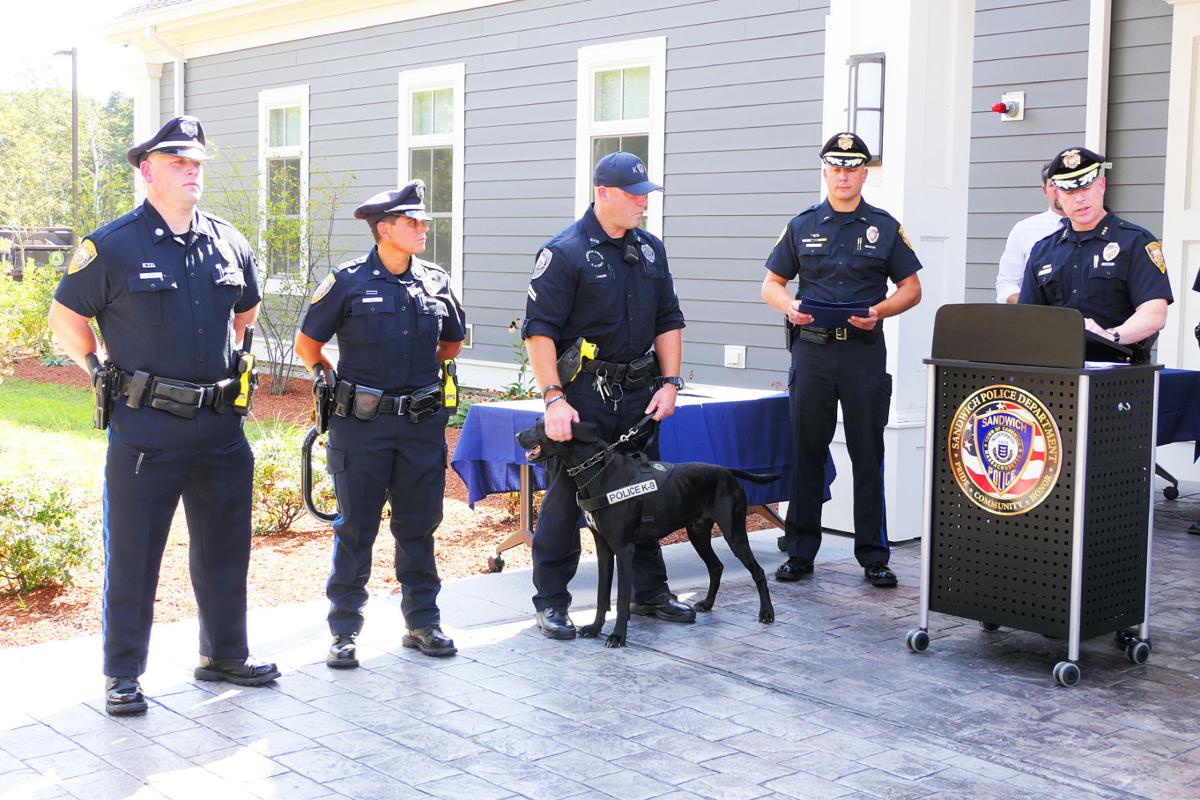 Members of the Sandwich Police Department take part in a promotion and life saving awards ceremony in front of the station last Friday. Detective Nate Reid, left, Officer Jessica Kent, Detective Matt O’Brien and search and rescue/narcotics K-9 Tukka were awarded the Life Saving Medal for their performance in locating a missing person on the morning of May 19. 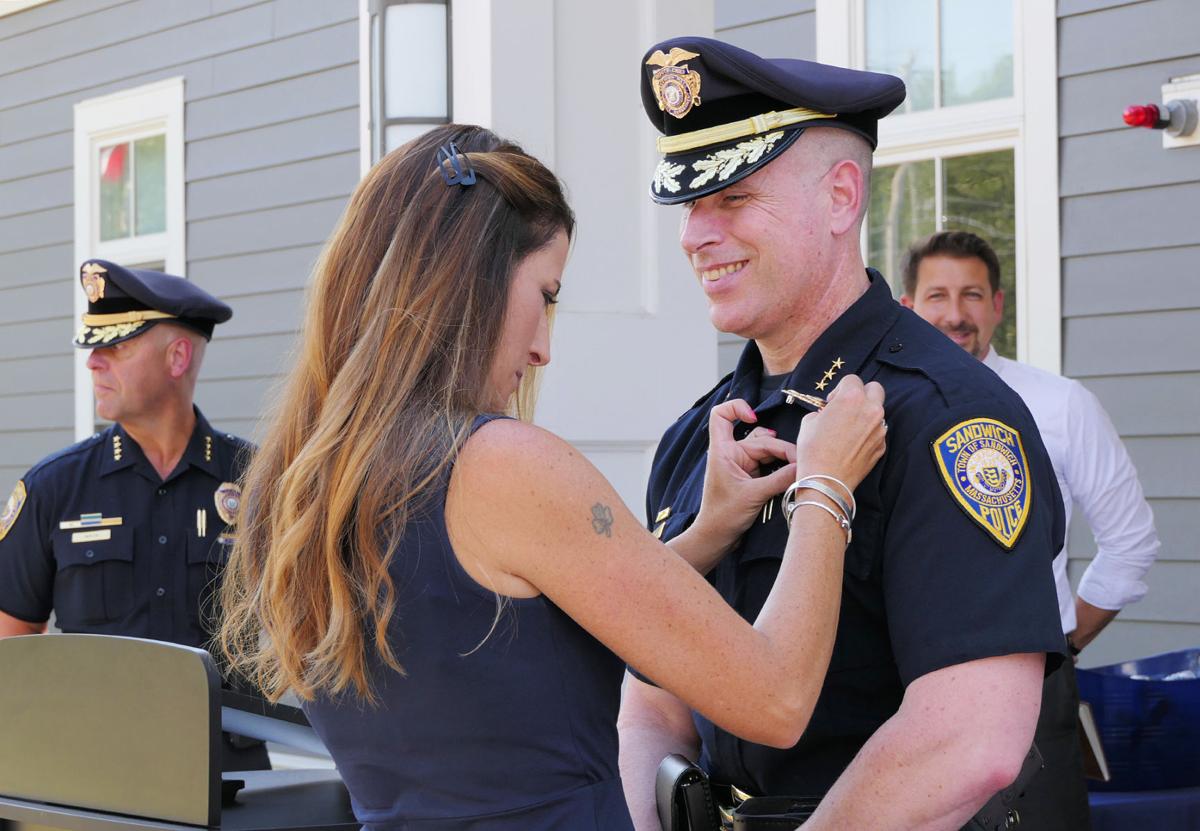 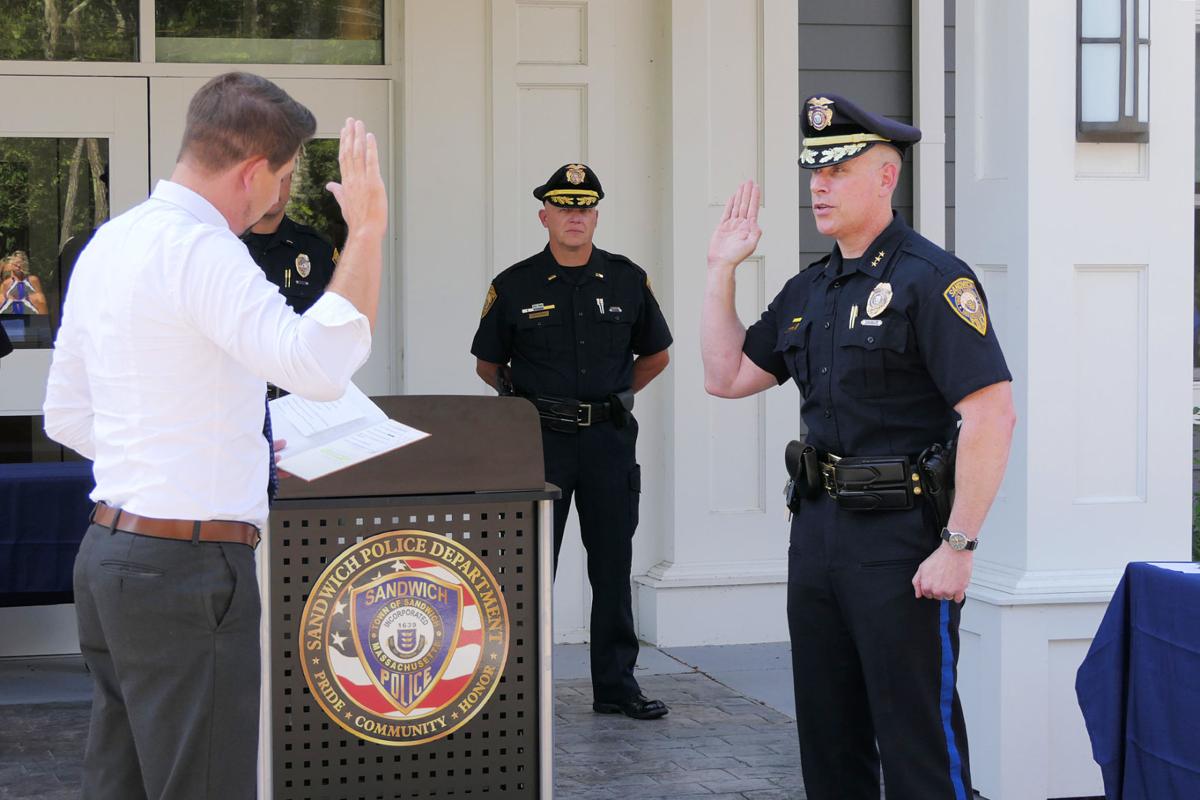 Members of the Sandwich Police Department take part in a promotion and life saving awards ceremony in front of the station last Friday. Detective Nate Reid, left, Officer Jessica Kent, Detective Matt O’Brien and search and rescue/narcotics K-9 Tukka were awarded the Life Saving Medal for their performance in locating a missing person on the morning of May 19.

A ceremony was held on Friday, September 4, to recognize the promotions of four members of the Sandwich Police Department to the ranks of deputy chief, lieutenant, sergeant, and detective.

The pinning ceremony was held outside of the Sandwich Police Station and all four men were sworn into their new positions by Town Clerk Taylor White.

Deputy Chief Jason Keene was pinned by his wife, Nikki Keene. He has lived in Sandwich since 1983 and been a member of the department since 1994. He served as a military police officer before his service in Sandwich. He was named a sergeant in 2007 and a lieutenant in 2015.

In 1991, Deputy Chief Keene served in Saudi Arabia during Operation Desert Storm and he is a graduate of the Northwestern University School of Staff and Command.

In addition to his wife, the deputy chief has two sons, Shawn and Dylan, and two daughters, Marissa and Ella.

Lieutenant Bruce Lawrence was pinned by his wife, Kerry Lawrence. He joined the Sandwich Police Department in 1997 and has been a full-time member of the department since 1999. He was promoted to sergeant in 2012 and is a graduate of the FBI Command Leadership Institute.

As a lieutenant, Lt. Lawrence will be assigned as the Administrative Services Commander.

Lt. Lawrence has two sons, Corey and Patrick, a step-daughter, Jessica, and a step-son, Brett. He also has a dog named Hank.

Police Chief Peter N. Wack said that Lt. Lawrence is an established leader who grew up in town.

Sergeant Michael Gumbleton was pinned by his wife, Ashley Gumbleton. Sgt. Gumbleton grew up in Falmouth and joined the department in 2005.

He served in the United States Navy in 1999 and had two deployments to the Northern Arabian Gulf during Operation Southern Watch.

Sgt. Gumbleton was assigned as a detective in 2015. Chief Wack said that he is an established leader who will be assigned to the Patrol Division.

He has two daughters, Elle and Charlotte.

Detective Nathan Reid was pinned by his wife, Carolyn Reid. Chief Wack said that he grew up in New York and joined the department in 2016.

He has two sons, Connor and Cullen.

In addition to the promotions, four members of the department were awarded the Life Saving Medal at the event for their work in finding a missing person on May 19, 2020.

Detective Reid, Officer Jessica Kent, Detective Matthew O’Brien, and K-9 Tukka were awarded the medal for finding and saving the life of a 62-year-old man who had been missing for about a week.