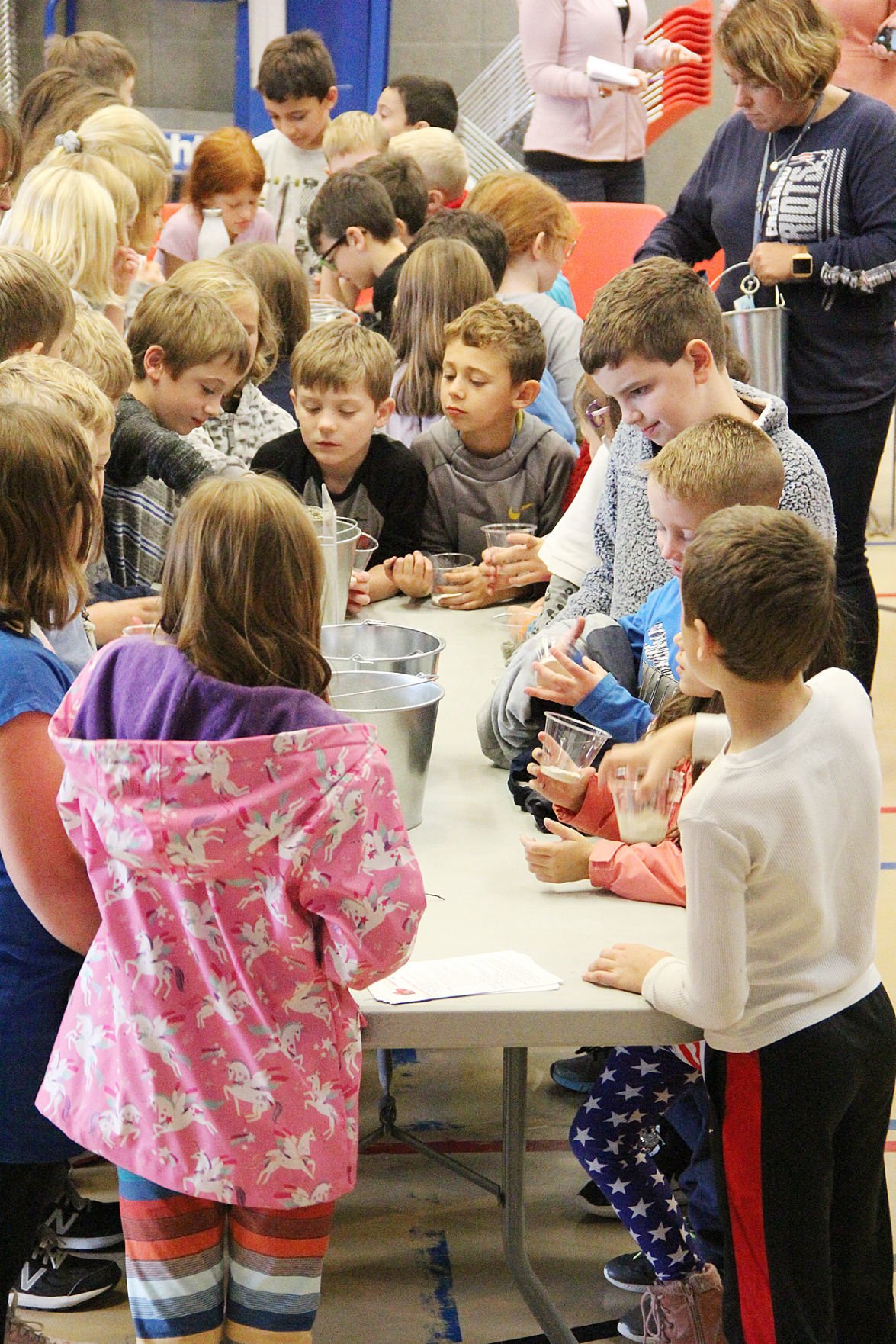 Forestdale 2nd-graders create individual cranberry “bogs,” starting by pressing a ball of clay into the bottom of a plastic cup during a lesson on locally sourced foods. 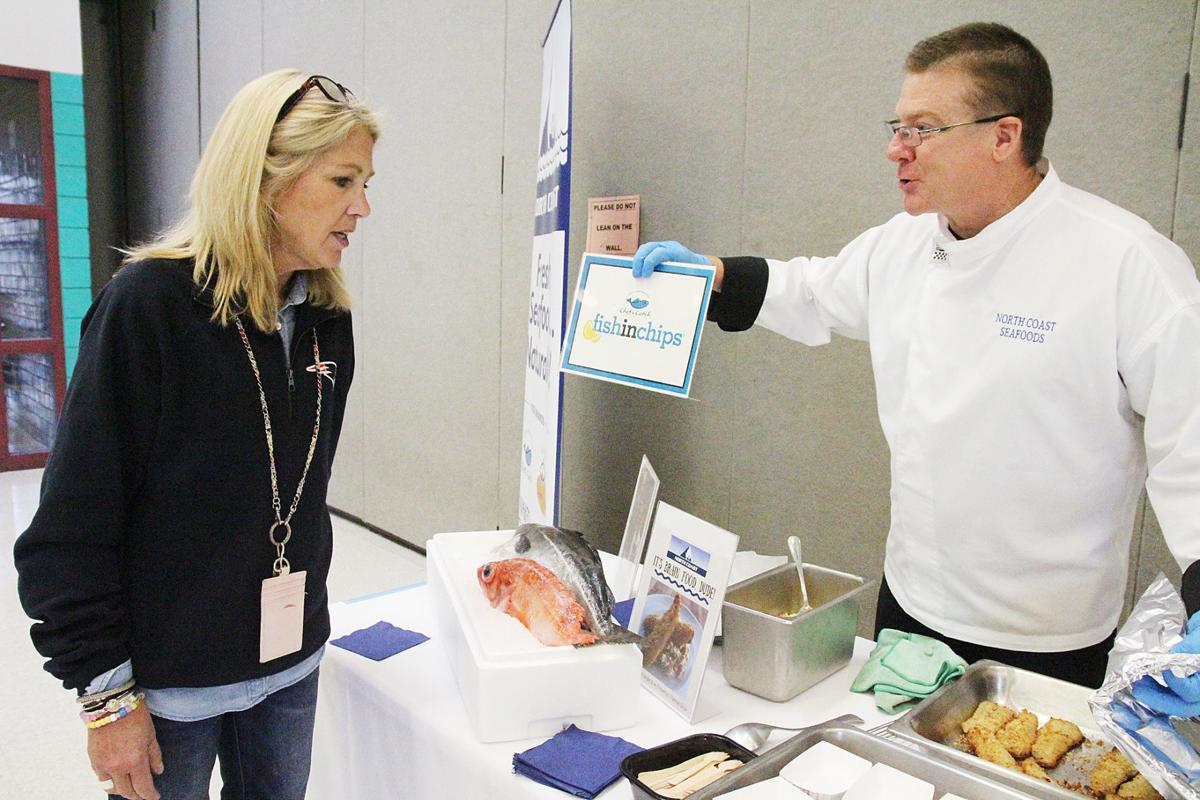 Andrew Wilkinson of North Coast Seafoods talks to Forestdale kindergarten teacher Nancy Sullivan about the Acadian Redfish now served in Sandwich schools. The redfish is under-used commercially because the fillets are often small, which makes them perfect for serving to children. 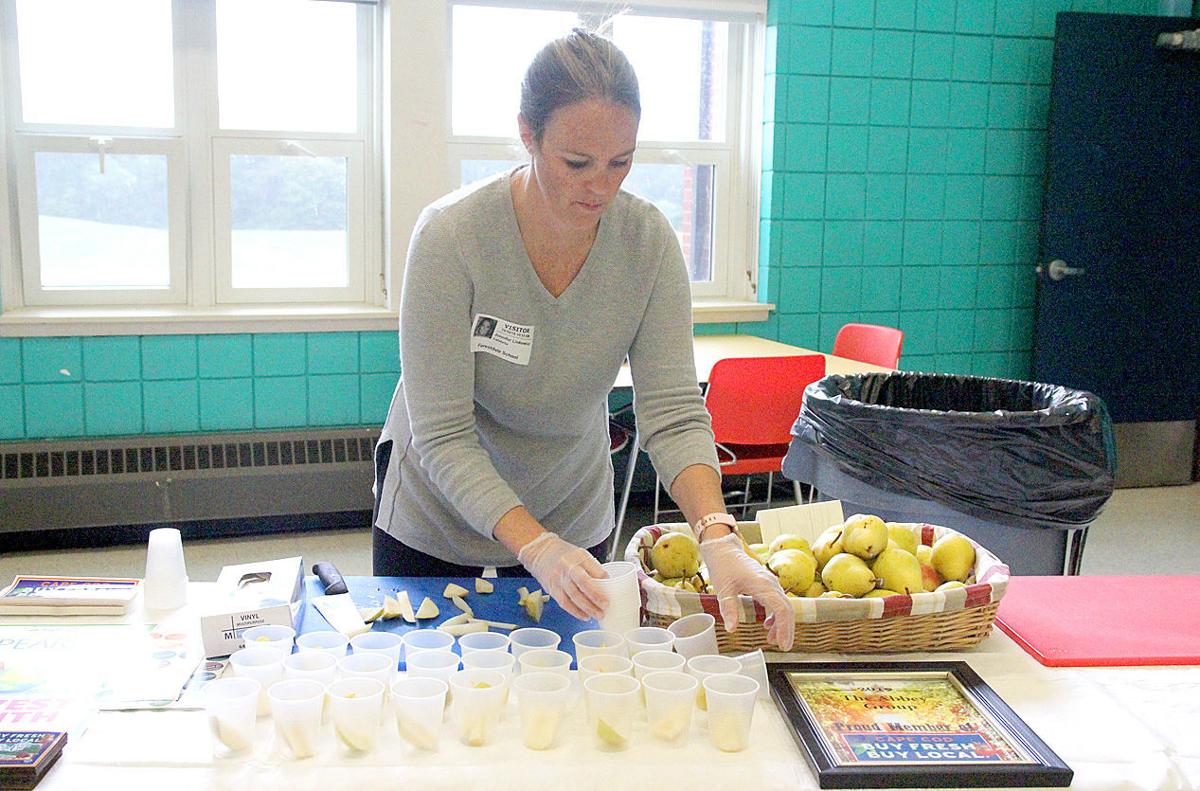 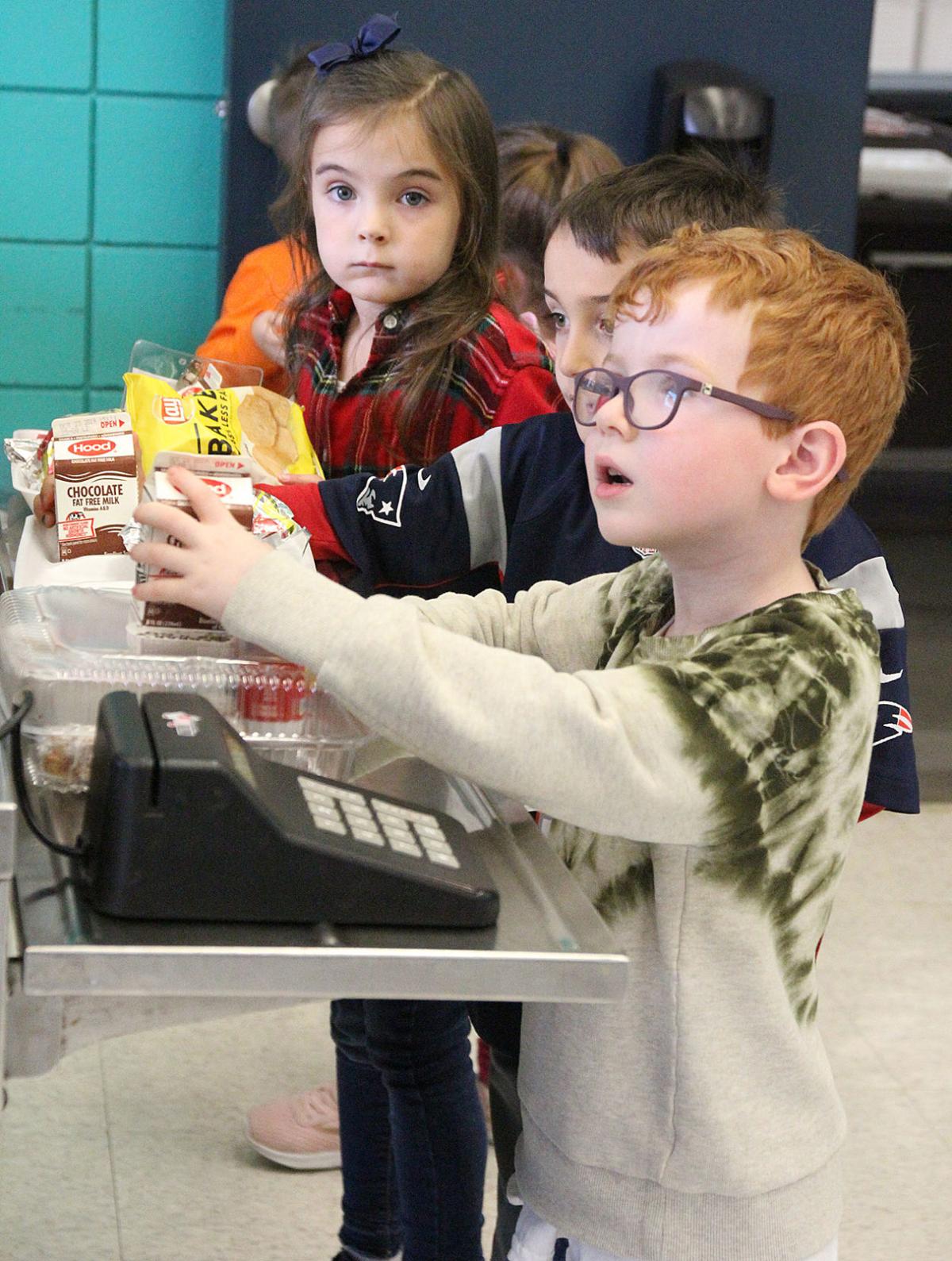 Forestdale five-year-old Grayson Webster lunch after the food presentation. In line next to Grayson are Liam O’Brion, 5, and Annabelle Adams, 5. 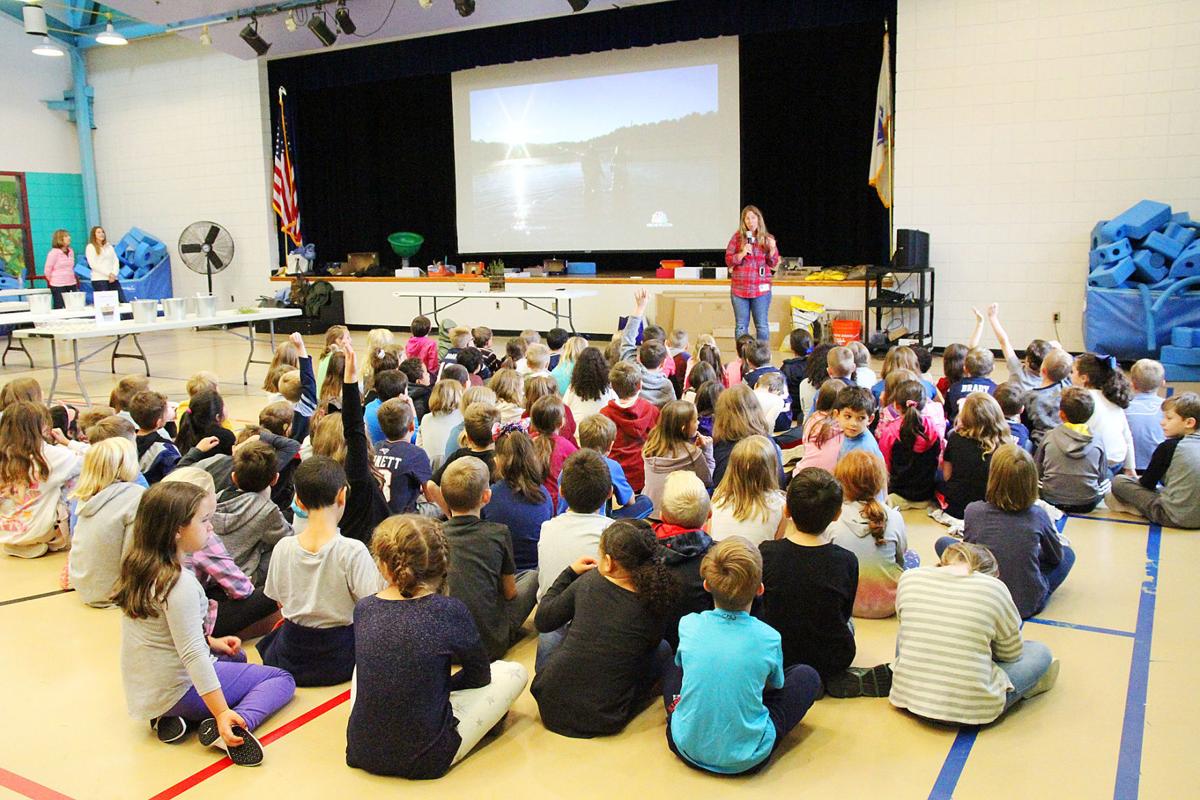 Forestdale 2nd-graders learn about cranberry farming during a presentation on locally sourced foods.

Forestdale 2nd-graders create individual cranberry “bogs,” starting by pressing a ball of clay into the bottom of a plastic cup during a lesson on locally sourced foods.

Andrew Wilkinson of North Coast Seafoods talks to Forestdale kindergarten teacher Nancy Sullivan about the Acadian Redfish now served in Sandwich schools. The redfish is under-used commercially because the fillets are often small, which makes them perfect for serving to children.

Forestdale five-year-old Grayson Webster lunch after the food presentation. In line next to Grayson are Liam O’Brion, 5, and Annabelle Adams, 5.

Forestdale 2nd-graders learn about cranberry farming during a presentation on locally sourced foods.

Students at the Forestdale School got a lesson in locally-sourced foods—from fruits grown on local farms to fish caught in local waters. All these foods, the children learned, are made available every day in the school’s cafeteria.

The lesson began with cranberries.

Students in the 2nd grade were greeted October 10 in the multi-purpose room by representatives from Ocean Spray cranberries. They were shown a brief video about how cranberries are grown and harvested and then given instructions and materials to make their own mini cranberry bogs.

The bogs were constructed in plastic cups starting with a ball of clay that the students pressed into the bottom of the cup. The students then scooped a bit of gravel on top of the clay. The gravel serves to allow any excess water to drain from the bog. The next layer was a scoop of peat, which holds onto water to keep the cranberry seed hydrated. On top of that was a scoop of sand, which allows seeds to take root while reducing the threat of insects, disease, and weeds.

They cranberry seedling was planted after the sand was placed. Each student was given a set of instructions on how to care for the plants.

As they left the demonstration, they were treated to samples of juice and Ocean Spray’s dried cranberry snack, Craisins.

In the cafeteria next door, Andrew Wilkinson from North Coast Seafoods was setting up a display on fish, complete with fresh fish on ice as well as samples of his signature fish-and-chips dish—a baked whitefish coated with Cape Cod Low Fat Kettle Potato Chips popular with young students.

The dish is made using Acadian Redfish, a fish that is caught in the Gulf of Maine. Mr. Wilkinson told the children that even though cod and haddock are the species usually used for fish-and-chips dishes, cod especially can not be sourced in local waters.

“We didn’t care before and now there are no cod on Cape Cod,” he said. “All cod is now from Iceland and Norway.”

He said that he also uses pollock in some of his fish dishes.

Mr. Wilkinson said that the idea for the fish-and-chips meal came from wanting to make fish more appealing to children so that they would be more willing to try the food. In order to do that, he removes the fatty layer of the redfish so that it tastes less fishy and then coats the filet in the low-fat chips. The fish is then baked instead of fried.

Another dish that he said is very popular among students is a pollock parmesan, which is made much the same way as the chicken version.

Students in kindergarten through second grade were able to try a piece of the fish-and-chips during their lunch periods. The fish was served with a carrot slaw. Many students in the cafeteria throughout the day were excited to line up to try it.

Mr. Wilkinson said that the fish they use are the small specimens too small to sell to big restaurants, but are perfect to use for children’s meals.

Students were also able to try this month’s “Harvest of the Month” during their lunch period, which for October is pears. The lunch th

day featured a dessert using local pears as well as cranberries and cranberry sauce made using fruit from PJ Cranberries, a bog in Sandwich.

Every month there is a featured food, all of which can be found locally. That food is integrated into menu items for that month.

The Abbey Group signed a three-year contract with the district, starting with the current school year. The company focuses on sustainable food sourced, when possible, from local farms and creameries.

The menu at the schools is a mix between traditional school lunches such as chicken patty sandwiches and more sophisticated fare such as lobster macaroni and cheese. Everything is cooked with federal nutrition guidelines in mind so even more decadent meals are made using healthier ingredients such as milk instead of cream and low-fat cheeses.

“I make those in a closed kitchen after school hours to avoid cross contamination,” he said.

Mr. Carney said that they do not use a “cookie-cutter” menu and that they choose what they will serve students based on the feedback they receive from students and families.