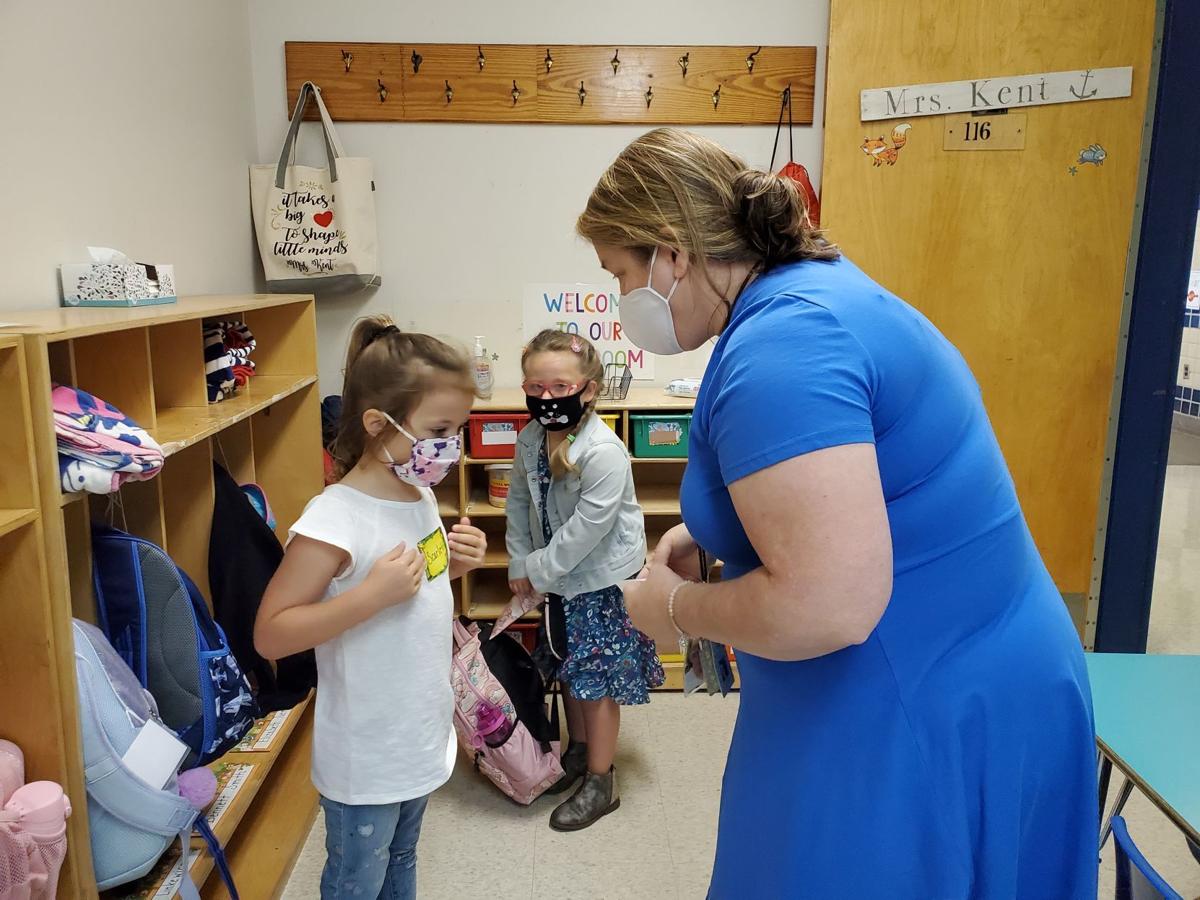 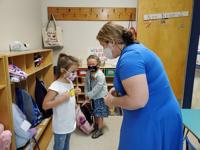 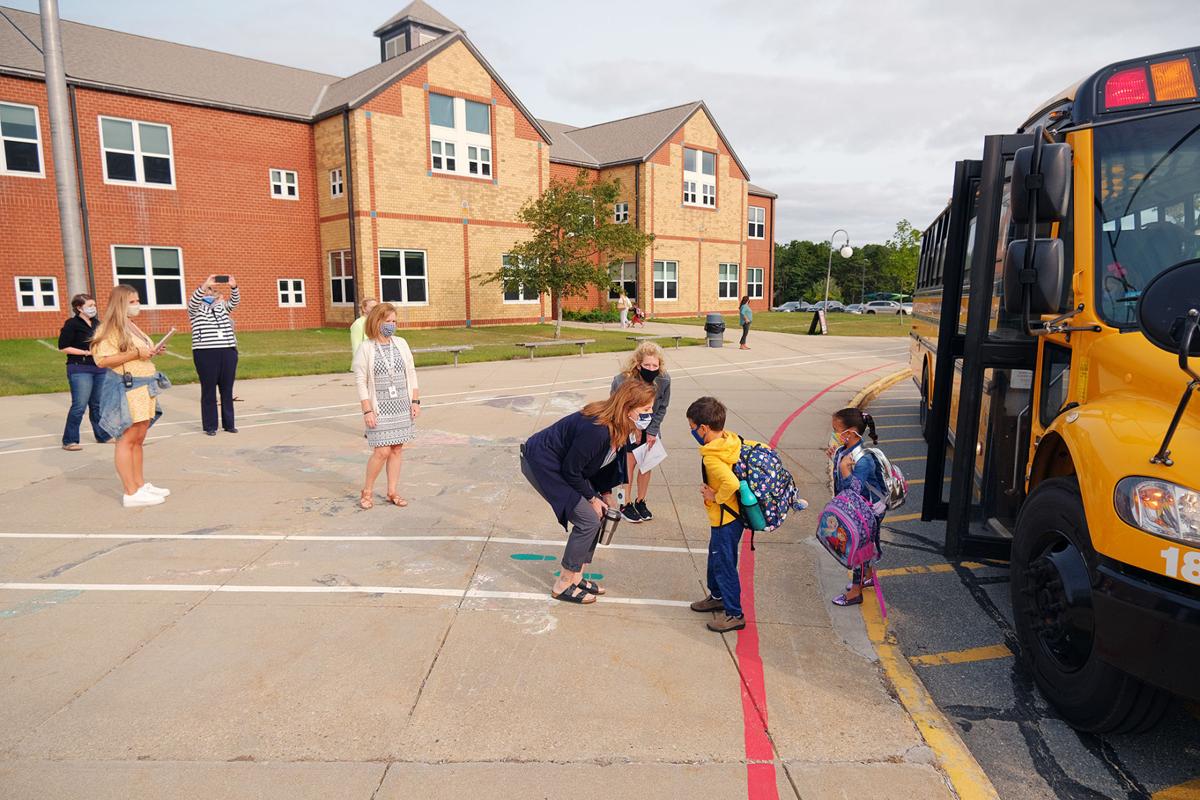 Forestdale School students step off buses and out of their parents’ cars for their first day back to school. 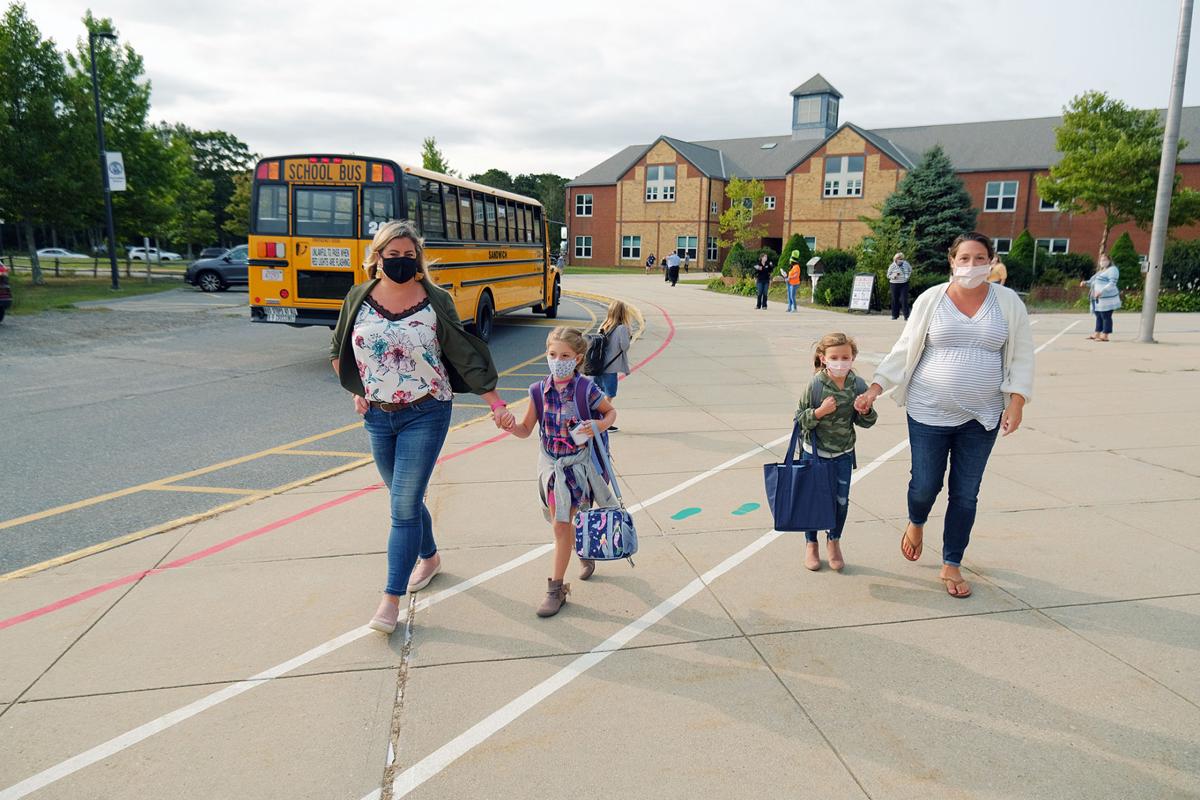 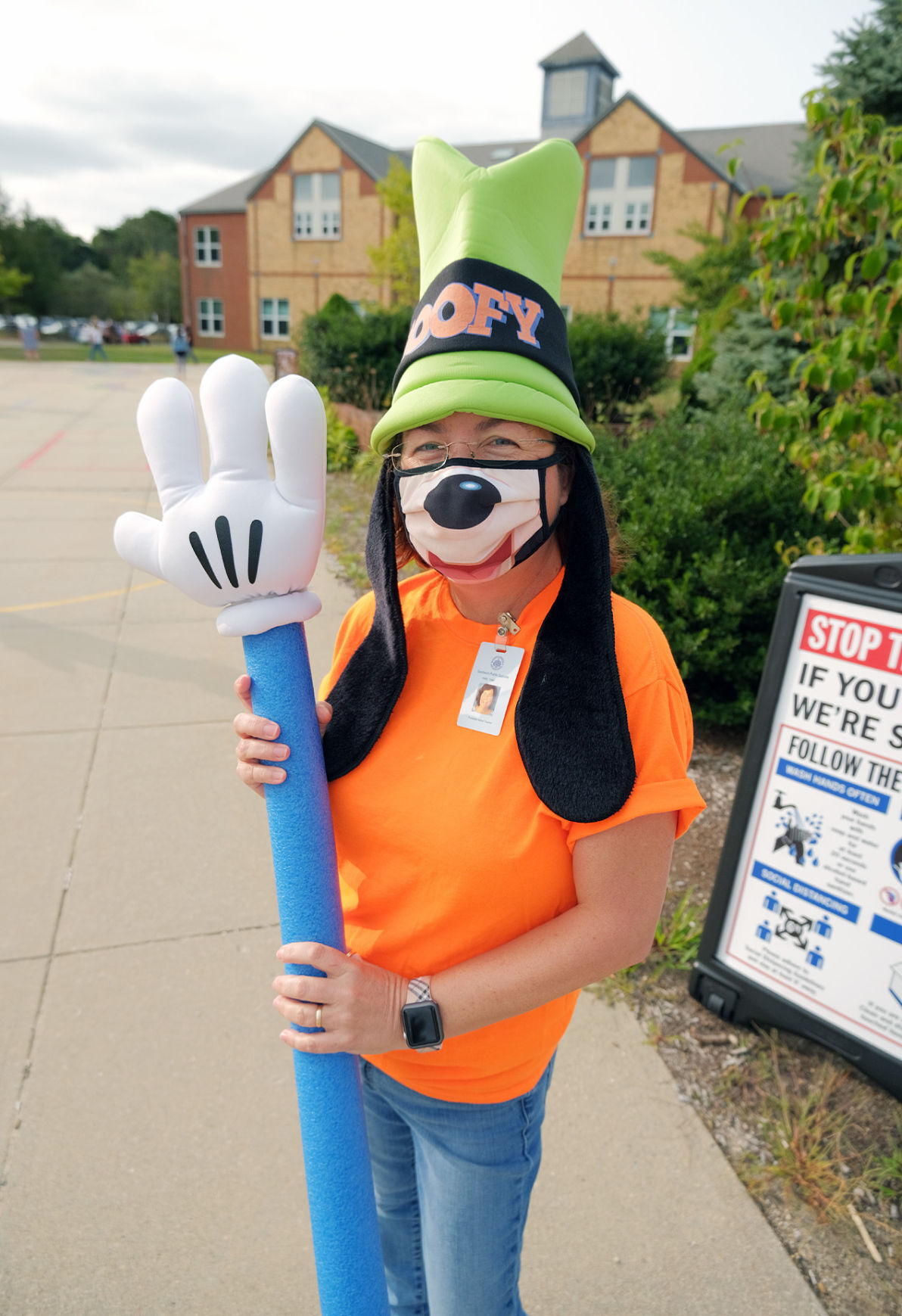 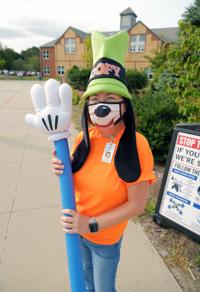 Math coach Kelly Hart got creative (and a little Goofy) on the first day of school with her mask and a social distancing device. 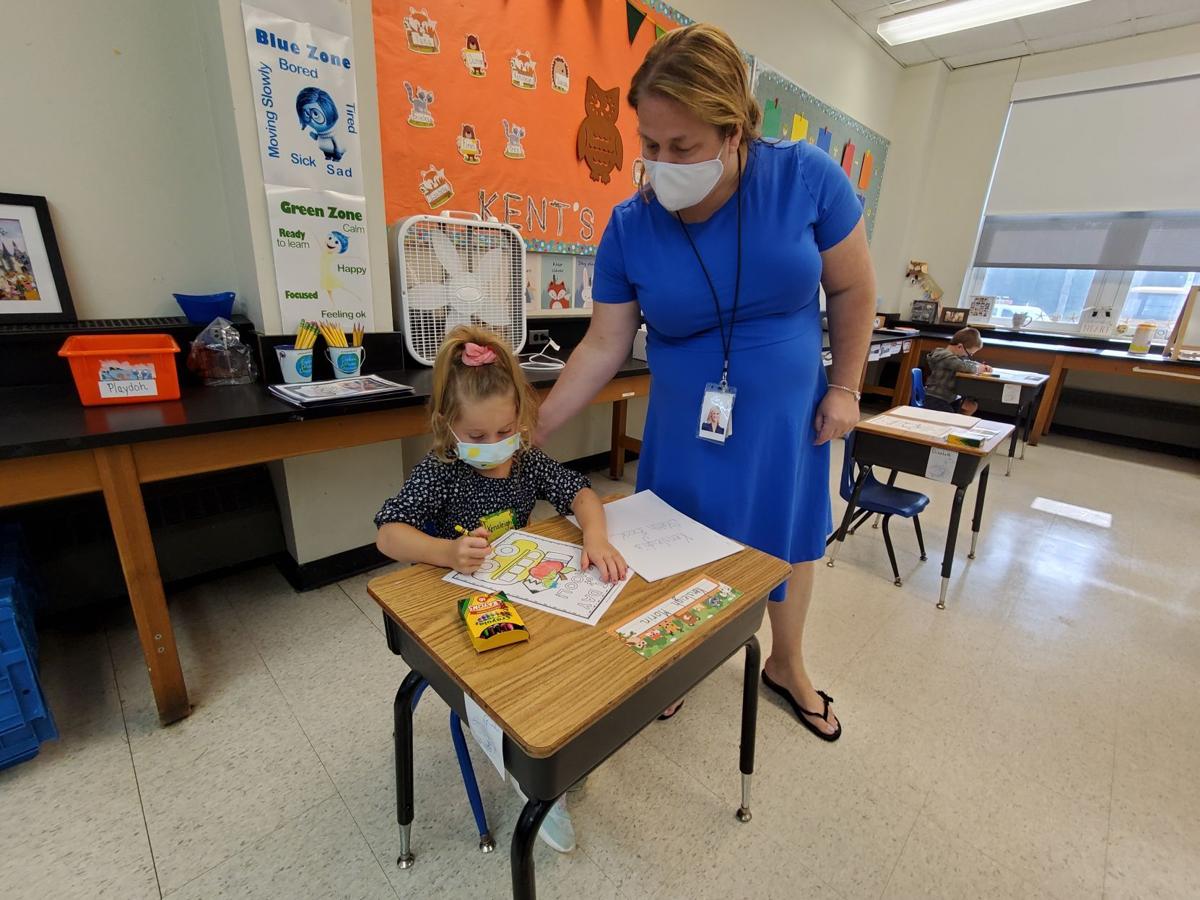 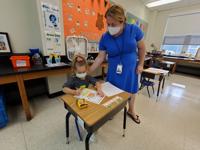 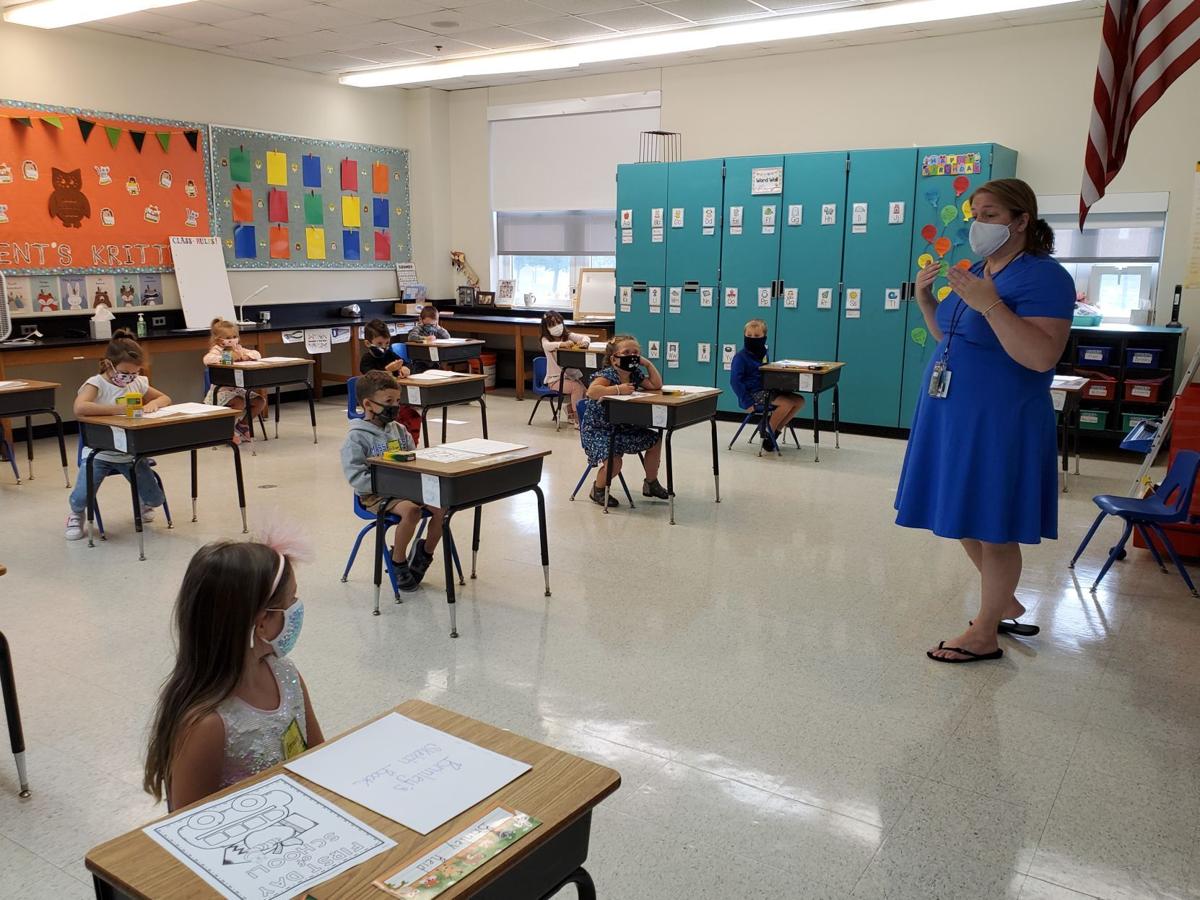 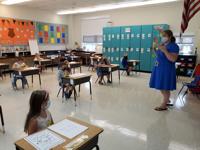 Lisa Kent, a Forestdale School kindergarten teacher, starts the first day of school talking with her students about the expectations of the year.

Forestdale School students step off buses and out of their parents’ cars for their first day back to school.

Math coach Kelly Hart got creative (and a little Goofy) on the first day of school with her mask and a social distancing device.

Lisa Kent, a Forestdale School kindergarten teacher, starts the first day of school talking with her students about the expectations of the year.

First days are usually marked with students streaming off school buses and bounding into classrooms but this year, at the Forestdale School, the proceedings were a little more controlled than usual on Tuesday, September 15.

About 20 staff members were outside to help masked students at each of the two parent drop-off locations on campus—help students get off the buses, and make sure that they were able to find their classrooms.

When students got off the buses there was no bounding. Instead, students exited the bus in an ordered line. Most of the hustling was done by the school staff trying to get all of the students inside on time.

By 9:05 AM, all of the students who were dropped off by their parents were inside the buildings. It took longer than usual to unload all of the buses and the morning announcements were delayed until 9:30 AM.

Still, spirits were high as students arrived on campus for the first time since Friday, March 13.

“It’s the best day ever!” said math coach Kelly Hart, who was dressed up as classic Disney character Goofy. “It’s been far too long.”

Principal Christopher Dintino said he had no concerns at all that the students would follow all of the guidelines that have been put in place to ensure a healthy and safe school year.

Sure enough, the young students appeared to be taking the precautions very seriously as they started their day.

When students arrived to Lisa Kent’s kindergarten classroom, she showed them how to put their backpacks away and then asked that they wash their hands before finding their desks.

While the classroom was arranged using social distancing guidelines— with the desks spread far apart rather than the typical clustering—Ms. Kent’s room felt like a kindergarten classroom. Within minutes, the youngsters were happily chatting about their days so far.

Ms. Kent started her class by talking about the expectations for the year—at which point two students said that they needed to go to the bathroom.

Much of the day was spent getting the students oriented to the new look and feel of the school. Students were taught how to breathe easier while wearing their masks by breathing in through their noses and out through their mouths, how to keep their distance from each other in the hallways, and about the new bathroom procedures for this year.

Ms. Kent said that if the students are given high expectations at the outset, they will rise to meet those expectations. However, she said, having fun is still high on the agenda.

In previous years, the first day of kindergarten was an abbreviated day where families were invited to take part. While that could not happen this year, the young students in Ms. Kent’s class did not appear to have any difficulty adjusting to their new routine.

At the end of the school day, parents began lining up for parent pick-up for the first group of students. At 3:05 PM, the doors were opened right on time to allow parents into the gymnasium to pick up their children. Before entering the gymnasium, parents were asked to sanitize their hands.

While only a handful of parents were allowed into the building at a time for pick-up, the process went quickly and the way was clear for the next round of parents to arrive for the 3:20 PM pick-up.

As with drop-off, there were a number of staff on hand to make sure the process went smoothly.

Multiple staff members remarked that the day had been amazing.

The last bus pulled away from the school at 4:05 PM. That is late for Forestdale, but Mr. Dintino said that it will improve as the last wrinkles get ironed out. He said it can take three to four weeks in a typical year to achieve consistent bus times.

In an email to parents, Superintendent Pamela A. Gould said that despite the anxiety many people felt leading up to the day, she was happy that everything went as well as it possibly could.

“I have to say it may have been one of my favorite first days in my over 30 years of education,” she said. “Any of the stress of the past few months just disappeared.”

In addition to the students who returned to the classrooms in-person on Tuesday, another portion of the school population logged into their virtual classrooms in the morning. While there may have been a few technical glitches early on, several parents took to social media to share words of thanks to the teachers who made those classes a special experience.

Even students who had felt some nervousness at the thought of coming to school said their fears were allayed once the day began.

One of Ms. Kent’s students, Scarlett Linkewicz, said the welcome video that Ms. Kent sent to students was what made her excited to be there.

“I was so nervous last night, then today I didn’t get nervous anymore,” she told Ms. Kent.