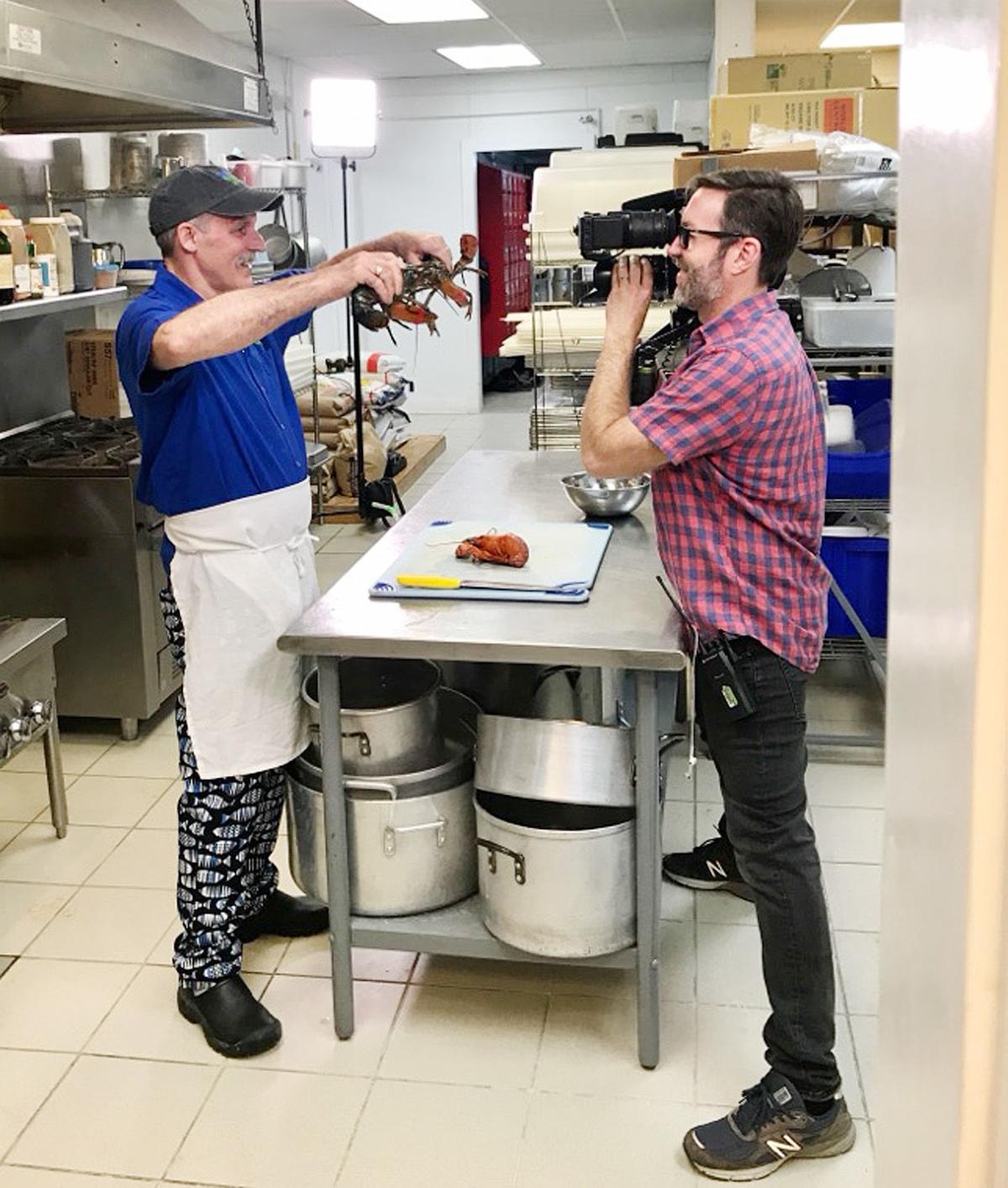 Jeffrey Lewis, owner of Seafood Sam’s Sandwich, shows a cameraman from The Cooking Channel a pair of lobsters. The restaurant will be featured on an upcoming episode of “The Best Thing I Ever Ate.” 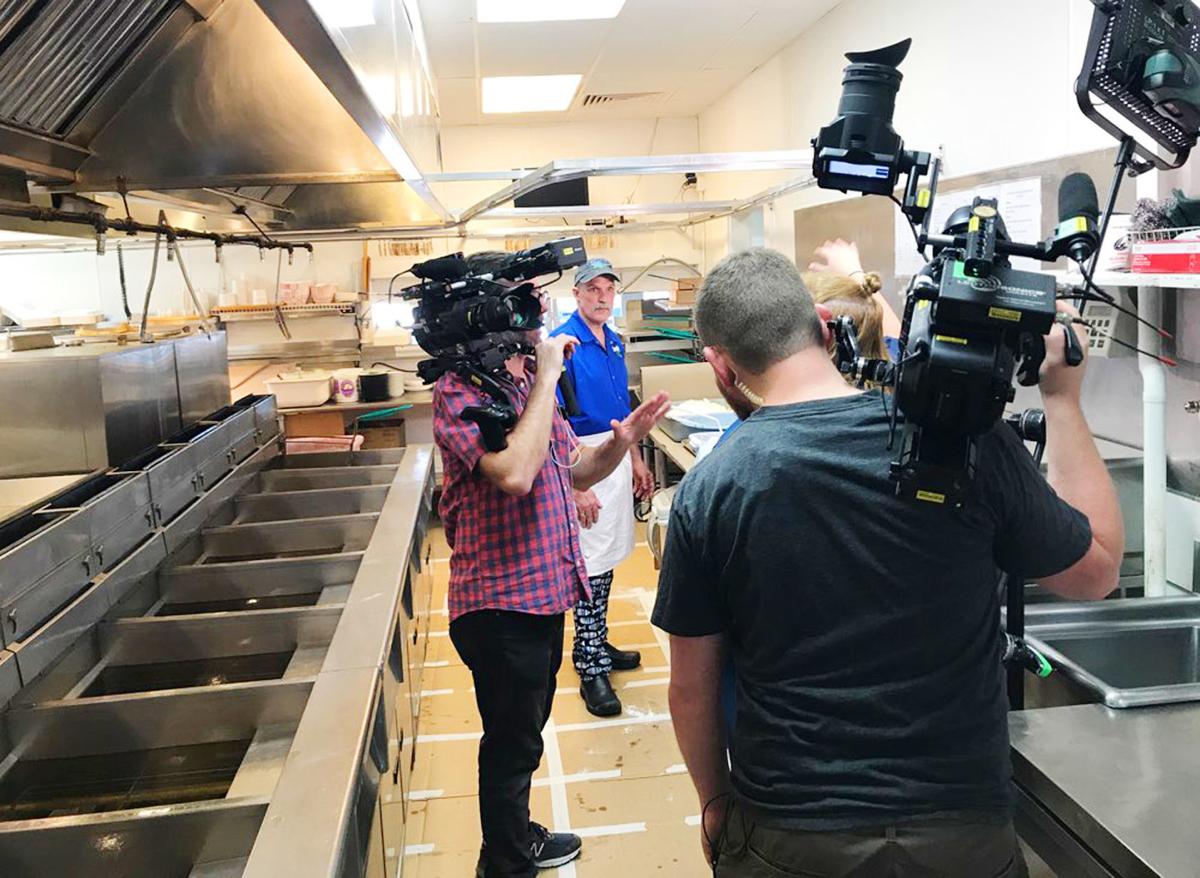 Seafood Sam’s Sandwich owner Jeffrey Lewis is filmed by the Cooking Channel’s film crew for an upcoming episode of “The Best Thing I Ever Ate.”

There are big things happening at Seafood Sam’s Sandwich—including its landing a spot on The Cooking Channel’s “The Best Thing I Ever Ate.”

Owner Jeffrey Lewis does not know when, but at some point celebrity chef Duff Goldman visited the restaurant and ordered their fried lobster, declaring that the dish is one of the best things that he has ever eaten. As a result, The Cooking Channel was dispatched to the Coast Guard Road establishment to film for the show.

Mr. Goldman, a 1993 graduate of Sandwich High School, was not involved with the filming. Instead, the crew spent the day filming at the restaurant capturing images based on what Mr. Goldman had said about his meal.

The crew spoke with employees as well as customers, Mr. Lewis said.

“They were very good,” he said of the crew. “Very accommodating and very fun.”

Much of the process was kept under wraps, and Mr. Lewis said that they were not told very much at the time. They were also not allowed to tell anyone about the fact that the restaurant was going to be on the show until they were notified by the network about what day the episode would be airing.

Earlier this month, they were able to announce that the episode would be airing on Monday, December 30, at 9 PM. The episode’s title is “On the Waterfront,” and Sam’s shares the episode with Cecconi’s Dumbo in Brooklyn, New York, and River Roast in Chicago, Illinois. All three restaurants boast waterfront views.

Mr. Lewis said that getting recognized by Mr. Goldman has felt pretty good.

“It’s exciting,” he said. “Not a lot of people have fried lobster.”

In addition to the national recognition of The Cooking Channel, the restaurant has plans to expand its business this coming spring with the addition of a food truck. Mr. Lewis said that he had considered opening a second location, but decided that the truck would be a better business move.

The truck is going to be run mainly by his son, Brian Lewis.

“We thought it would be a good next fit,” he said. “There is a big demand for food trucks for private functions.”

They have already purchased the truck, which is currently undergoing some work. Mr. Lewis said that he expects the truck will be operational by late spring.

He said that he is not yet sure exactly where the truck will be located or what events it will be involved with.

They are looking at the annual Cape Cod Food Truck & Craft Beer Festival that takes place each year in August at the Cape Cod Fairgrounds in East Falmouth and possibly parking at the Naukabout Brewery and Taproom in Mashpee.

As far as the truck’s menu is concerned, that, too, will be somewhat fluid. The truck will likely feature a scaled-down version of the restaurant’s menu with some of the restaurant’s most popular items, he said. Beyond that, it will depend on the event that they are hired for.

For example, the menu at a food truck festival might contain smaller versions of items, so that attendees would be able to sample multiple items from different trucks without filling up too much from one restaurant.

Other types of private events could include weddings or parties.

Mr. Lewis said that the planning for the food truck is still in the early stages and that they will know more about how it will operate as time goes on.