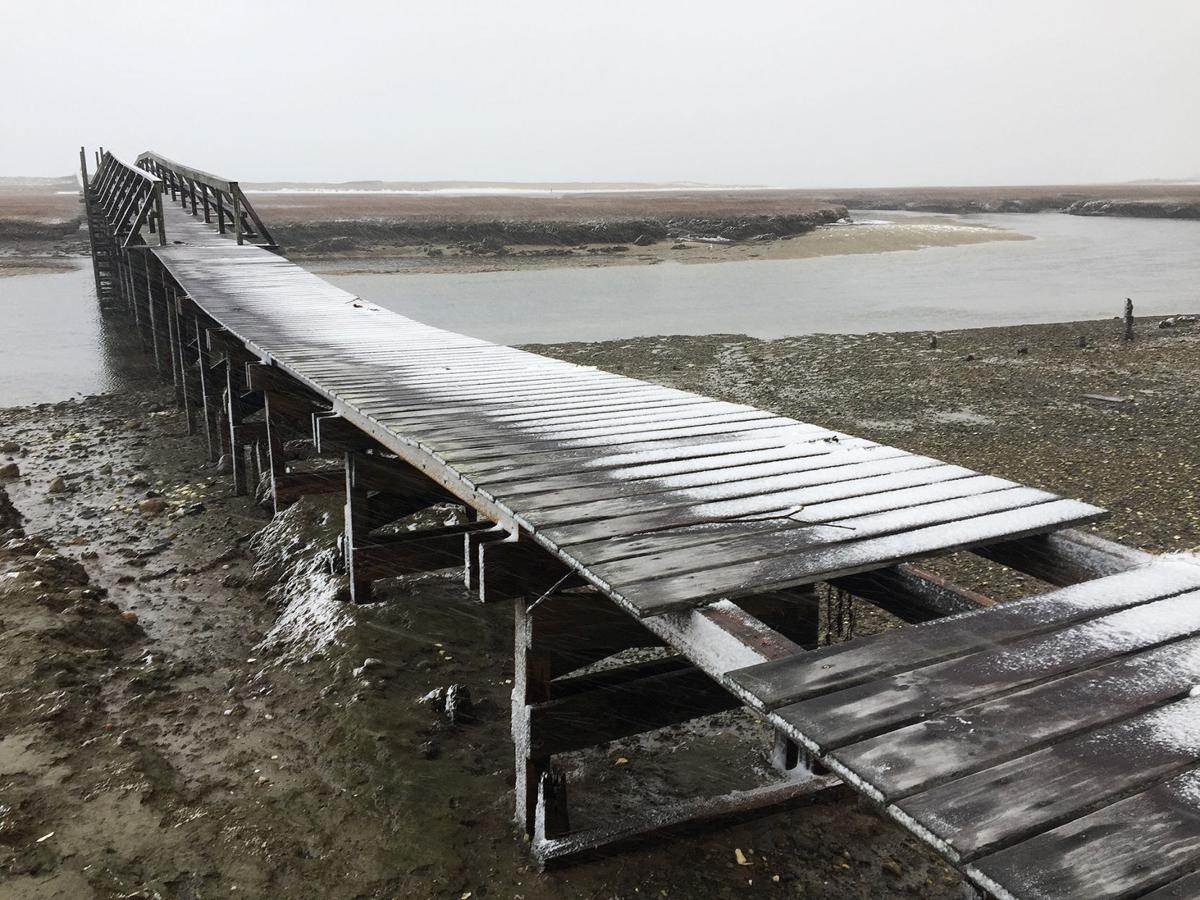 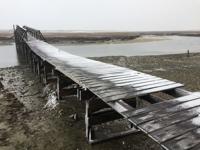 A dusting of snow covers the storm-battered Sandwich Boardwalk following a mid-December northeaster. Several planks along the length of the structure were ripped loose during the storm. Town workers have since replaced the missing pieces. 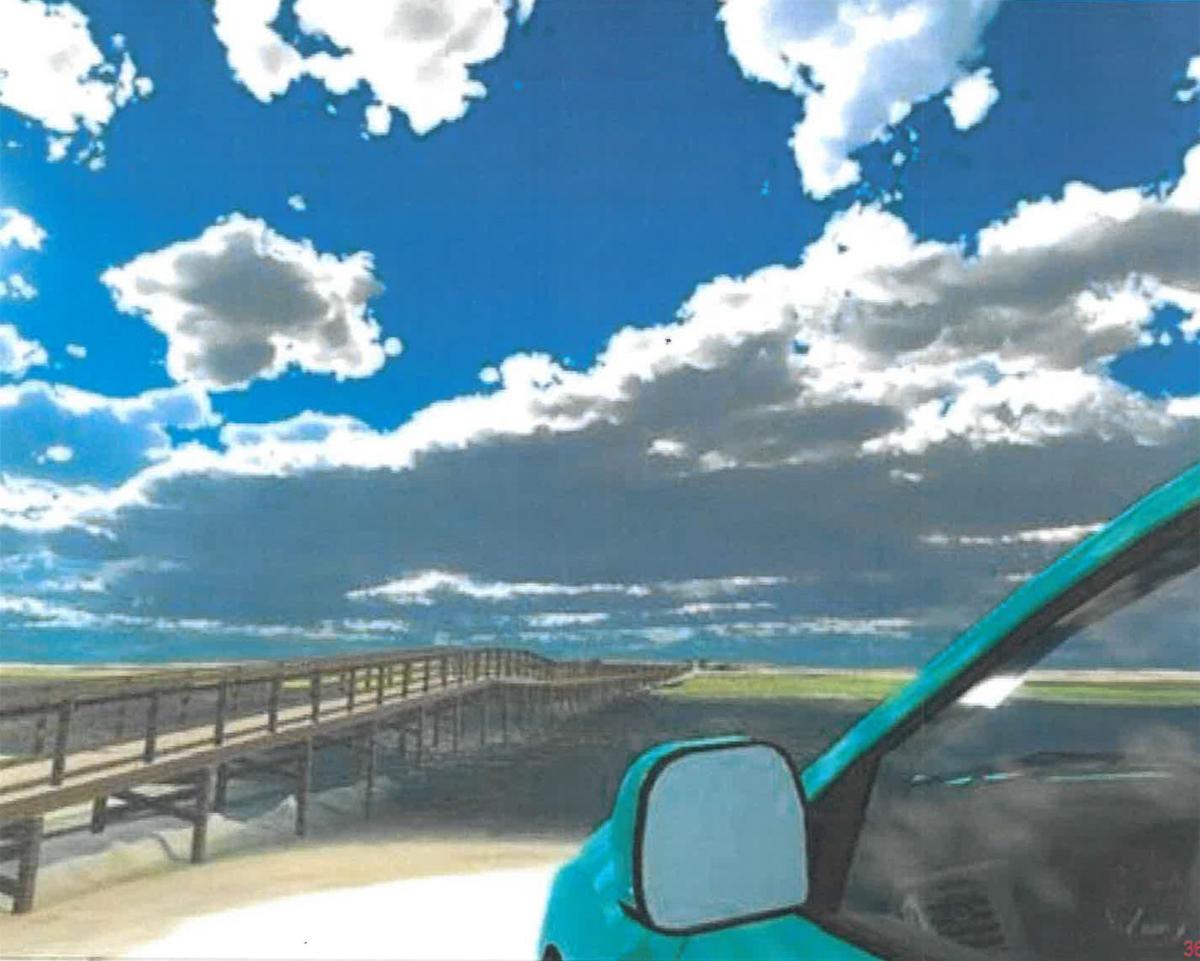 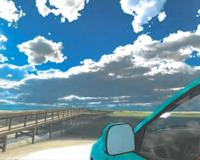 This rendering shows what the new boardwalk would look like from the parking lot at the end of Boardwalk Road.

The Sandwich Board of Selectmen Thursday, January 7 voted unanimously to move ahead with a $2 million boardwalk reconstruction project that has been delayed by COVID-19 for more than a year.

The vote gave permission to the boardwalk engineering firm, GEI Consultants, to proceed with their design work and to bring those detailed designs back to the selectmen—and the public—in March.

The selectmen also specified that the railings on the new boardwalk, which are necessitated by today’s building codes, be vertical. In GEI’s original proposal there had been an option for angled rails that opened more widely at the top, but that option would have cost the town an extra $90,000.

The project has already become more expensive—by about $300,000— because of the delays. Town Manager George H. (Bud) Dunham said the overage would be paid out of the public works road budget.

During a presentation to the board last night, GEI representative Alan Pepin said his company had incorporated the suggestions from the town, members of the public and various regulatory agencies.

Because of that input, the consultants would give more of an arch to the bridge, do away with rails altogether in some places and increase the width of the boardwalk itself to six feet.

Asked about a timeline, Mr. Pepin said the engineering consultants would need three to four months to complete design, six to nine months to obtain permits from local, state and federal regulatory agencies, and eight to 10 months for construction.

During the months between GEI’s original presentation and last night’s update, an advocacy group has formed to decry the town’s intent to replace the simple boardwalk structure with something that may be safer but is less aesthetically pleasing.

The Friends of Sandwich Boardwalk seeks to preserve the boardwalk’s simple design and would like the town to continue to repair the existing boardwalk rather than replace it.

During the public comment period of last night’s meeting, a long letter from the Friends of Sandwich Boardwalk was read aloud.

Raymond Howard, the chairman of the group, summarized the concerns in an email to the Enterprise.

Selectman David J. Sampson seemed to echo the group’s concerns in his suggestion that the town manager ensure that the design submitted by GEI is the “best one possible aesthetically.”

“I want to make sure we’re being very thoughtful and to make sure the design component is everything it could be,” Mr. Sampson said.

The selectmen did not incorporate that language into their motion but did stipulate that the design must be reviewed by themselves, and members of the public, before the final go-ahead for construction is given.

Members of the board have said their primary concern is that the boardwalk be safe and accessible to all—including older residents and people with disabilities.

The new boardwalk will be elevated about eight feet above the marsh level and screwed into the sand beneath the marsh’s peat floor with huge steel screws called helical piles. It will comply with today’s building codes and the Americans with Disabilities Act.

The Friends group is still seeking historic designation for the existing structure that would allow the town to be exempted from accessibility requirements and current codes.

The Sandwich Historical Commission and the Historic District Committee have said they support the advocacy group’s desire to retain the the clean, simple lines of the town’s iconic boardwalk.