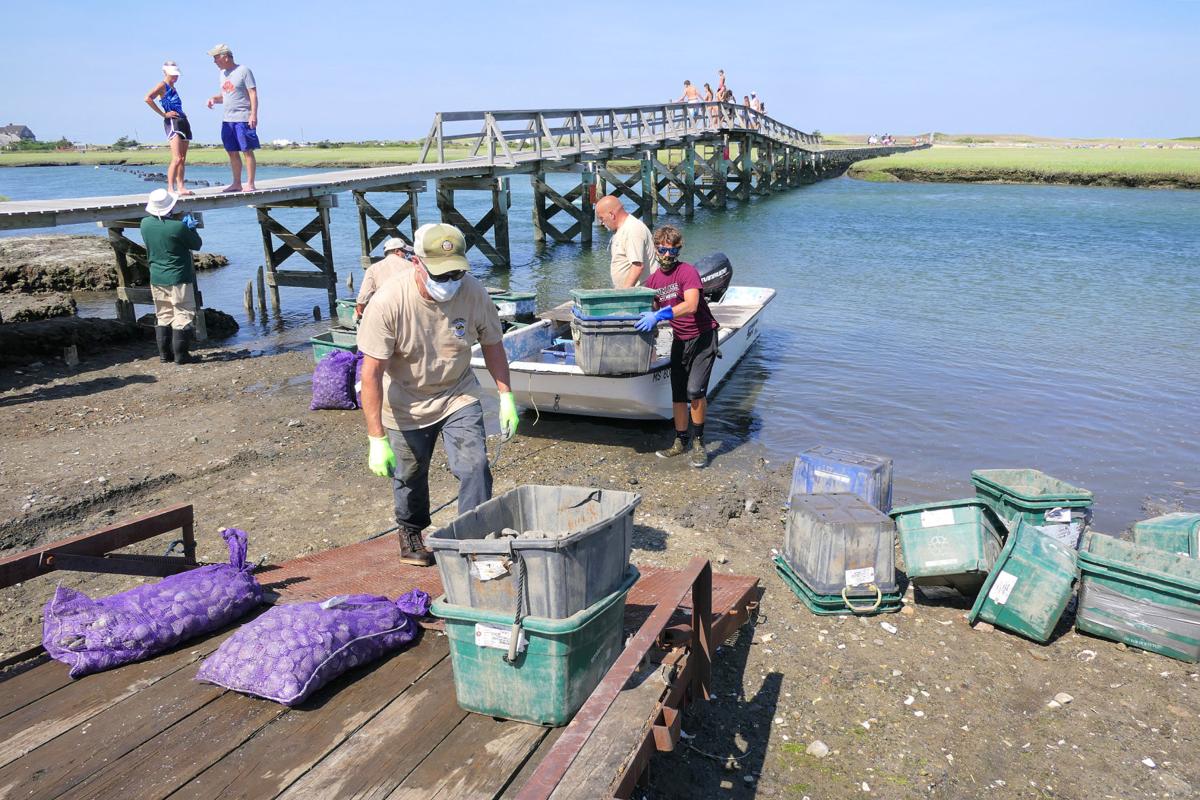 Sandwich Department of Natural Resource workers load a skiff with bins full of quahogs that were then dumped into Mill Creek in advance of this winter’s shellfish season. 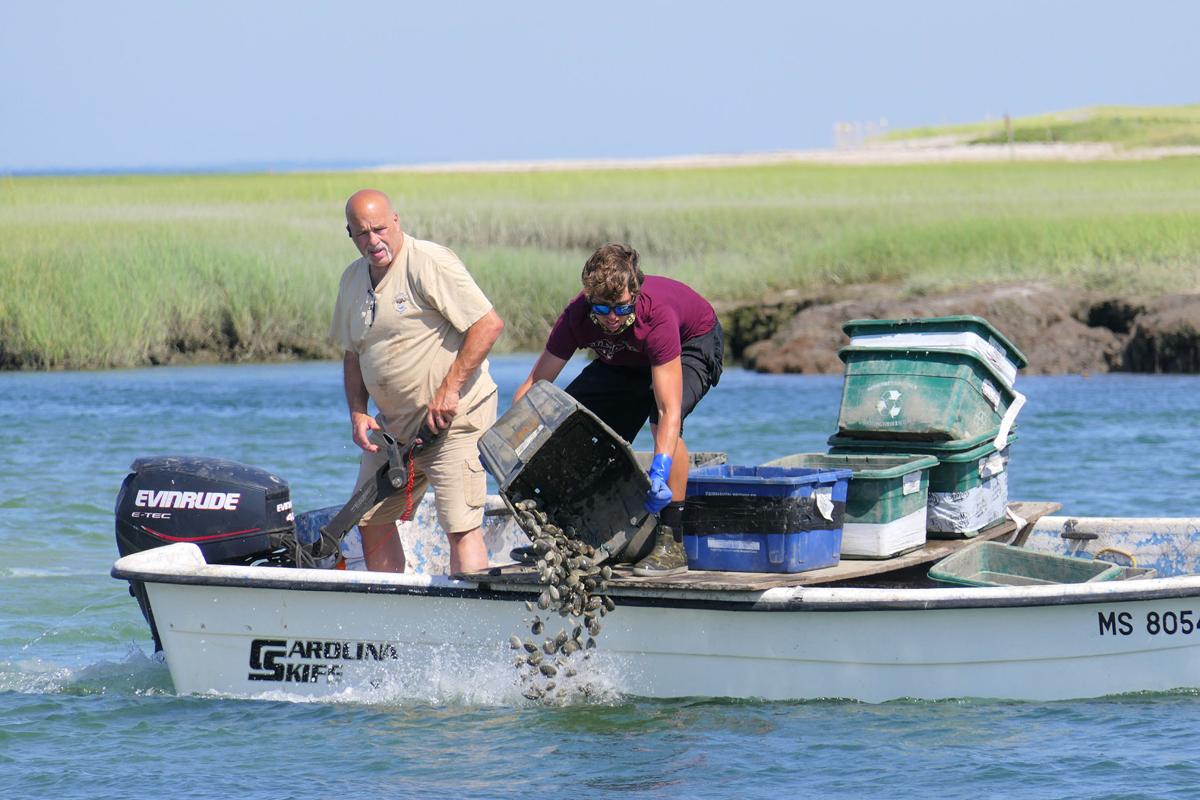 John Pimental navigates, while Seamus McArdle dumps the clams into the water. 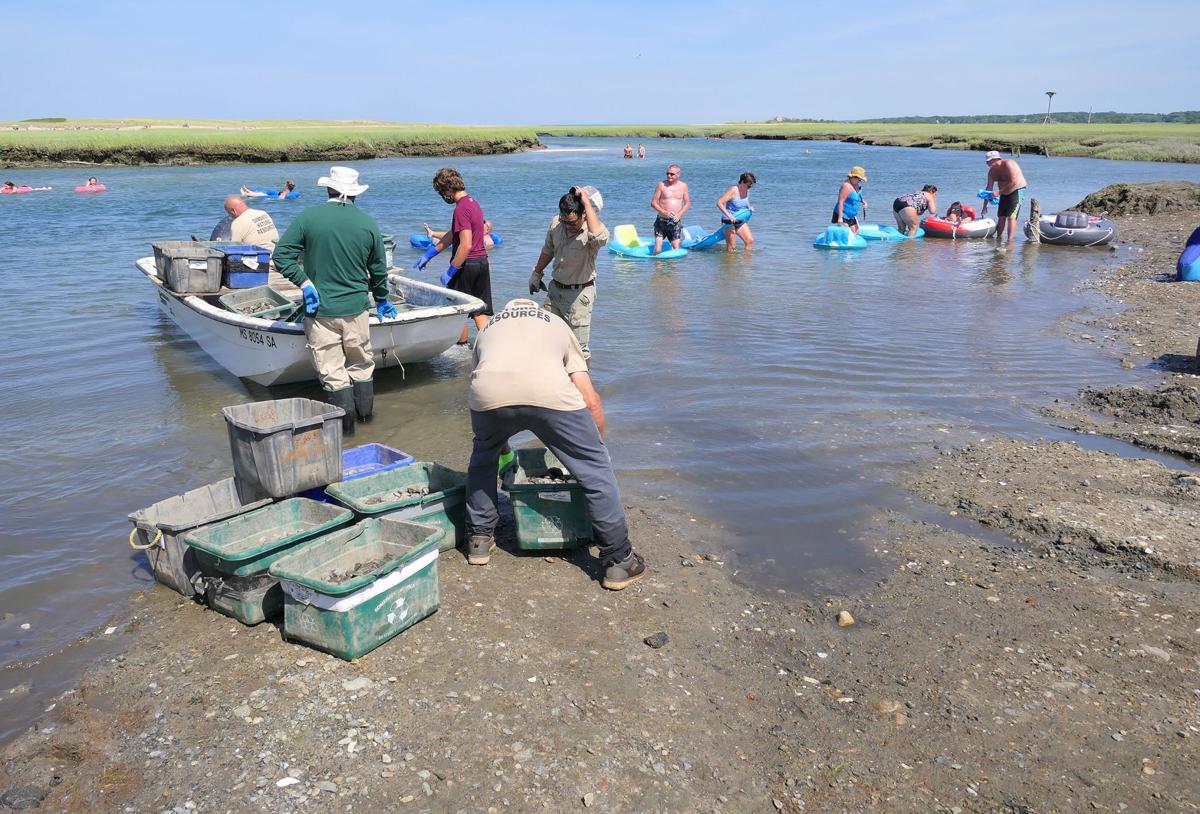 Sandwich Department of Natural Resource workers load a skiff with bins full of quahogs that were then dumped into Mill Creek in advance of this winter’s shellfish season.

John Pimental navigates, while Seamus McArdle dumps the clams into the water.

Time and tides wait for no man, but men—and clams—waited for more than an hour in the blazing heat this week for the tide to surge into Mill Creek.

Ninety bushels of quahogs arrived by truck from New Bedford at about 2 PM on Monday, July 27, one of the hottest days of the year thus far.

A crew from the town’s natural resources department were hoping to bring the truck’s trailer—chock full of clams in muddy plastic crates—to the edge of the shore, load them onto a small white skiff and then ferry them deeper into the creek for distribution.

But the tide was low, the shore was soft and muddy, and the truck could only get halfway to the skiff without getting stuck. The six men had to hoist and carry the bins of quahogs, each weighing about 80 pounds, down to the waiting skiff.

Two men in the boat then putted out to the middle of the creek to empty bins and mesh bags of thirsty clams into the creek’s shallow waters.

Children in brightly colored bathing suits stopped on the boardwalk to watch the quahog parade, as did visitors on the shore and people floating by on inner tubes.

“We didn’t plan to do this on the hottest day of the year,” said natural resources director David J. DeConto, whose face was masked and shaded by a bush hat.

Mr. DeConto has supervised the quahog seeding for many years.

“This year is different because we are doing all the work ourselves and we are placing only 300 bushels of quahogs over three days,” he said.

Usually volunteers from AmeriCorps are on hand to help out, but the national program was shut down this year by the coronavirus.

Natural resources staff not only did the seeding this week, they also trucked down to the Taunton River to pick up the shellfish to bring them to Sandwich.

“It saves us a little money that way,” Mr. DeConto said.

Sandwich purchases the quahogs from commercial clammers who are licensed by the state to harvest them from polluted waters—in this case, the Taunton River near Somerset.

Usually, the commercial clammers’ crews relay the quahogs from Somerset to Sandwich.

Many of the clams placed in the creek this week will be harvested by fishermen this winter, when shellfishing season is expected to begin.

If all goes according to plan, the quahogs will cleanse themselves of toxins—particularly fecal coliform—over several months. The water in Mill Creek, as well as the meat of the clams, will be tested by the state before fishermen are allowed to harvest the crop.

Once the state gives the go-ahead, permit holders are allowed to take up to one peck of legally sized quahogs a week during shellfish season.

Mr. DeConto said he expects the quahogs—and hopefully oysters—can be harvested by December.

“That way people can have clams and oysters for Christmas,” Mr. DeConto said.

He reminded onlookers this week that taking the quahogs now is strictly forbidden, emphasizing that eating them before they have been cleansed can make people very sick.

The exhausted natural resources crew finished their planting work by 3:40 PM, following another short delay to replace a fuse in the boat’s outboard motor.

“All in all it was a good day,” Mr. DeConto said. “We didn’t lose anybody, we didn’t have any major problems, and we got all the clams in before quitting time.”

New Music Video From Crooked Coast Will Be Released Friday