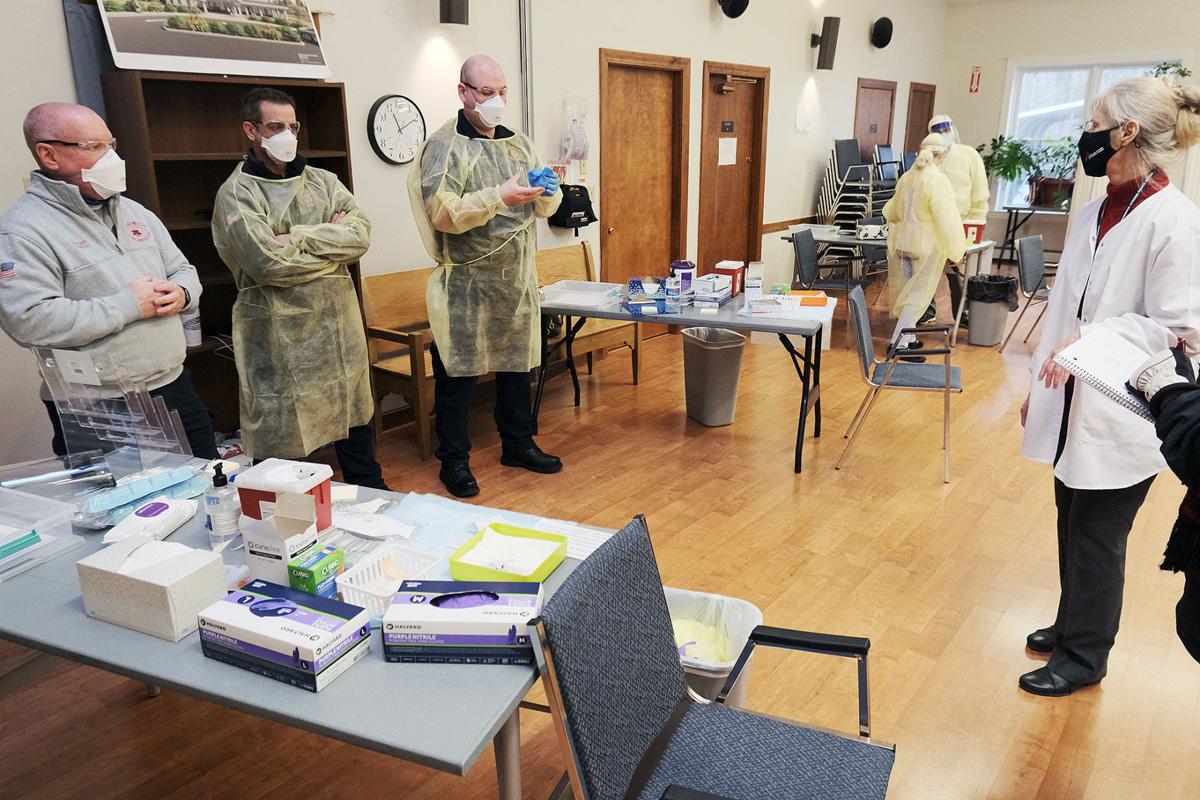 Sandwich Public Health Nurse Joanne Geake (right) talks with some of the staff inside the Sandwich Human Services Building during a clinic to provide COVID-19 vaccinations to Upper Cape police and firefighters on Monday. 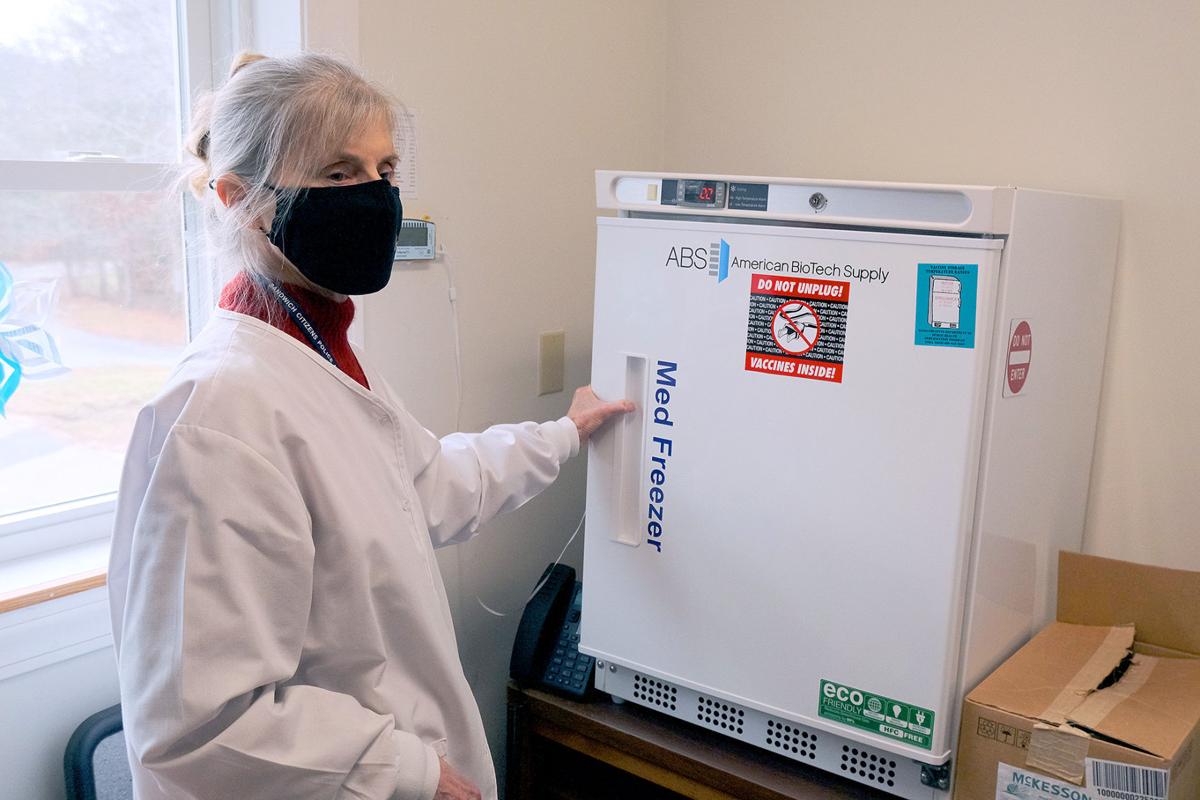 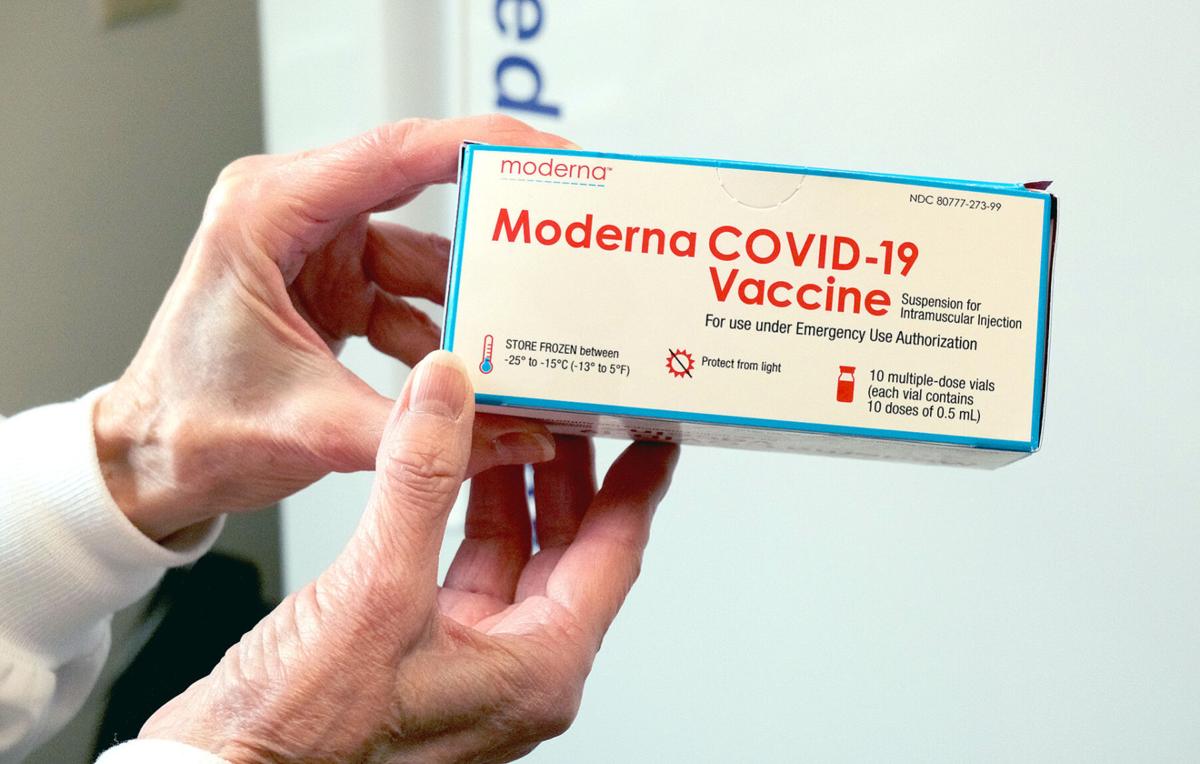 A box of the vaccine from Moderna 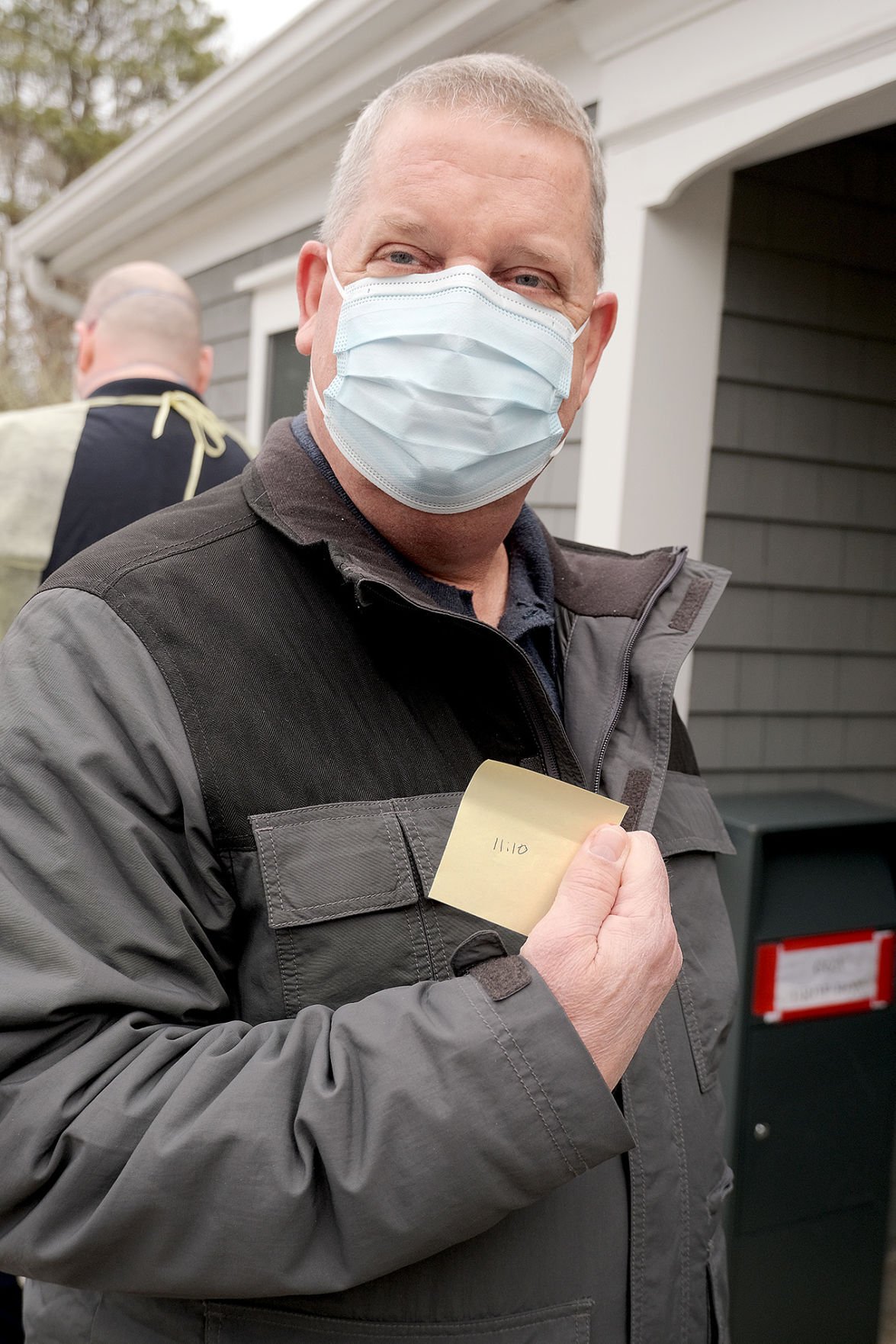 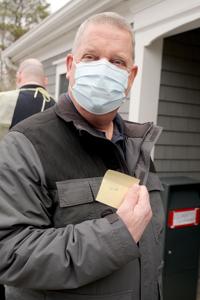 Sandwich Patrolman Mike Wood holds up a note with the time of his vaccination. He needed to show that note before leaving to ensure he waited 15 minutes after getting the shot. 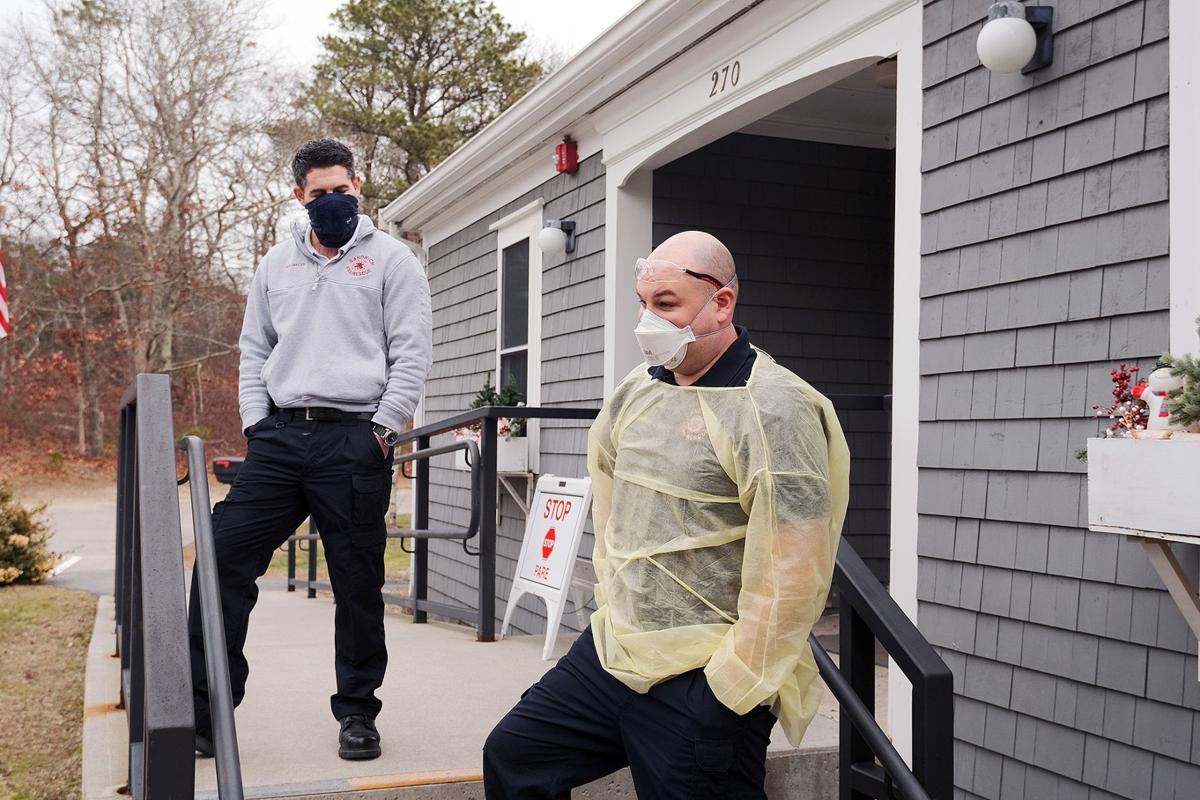 Recently vaccinated EMS officer Sean Gilrein, at left, and firefighter Scott Thomas, who was also administering the shots, stand on the front steps of the building. 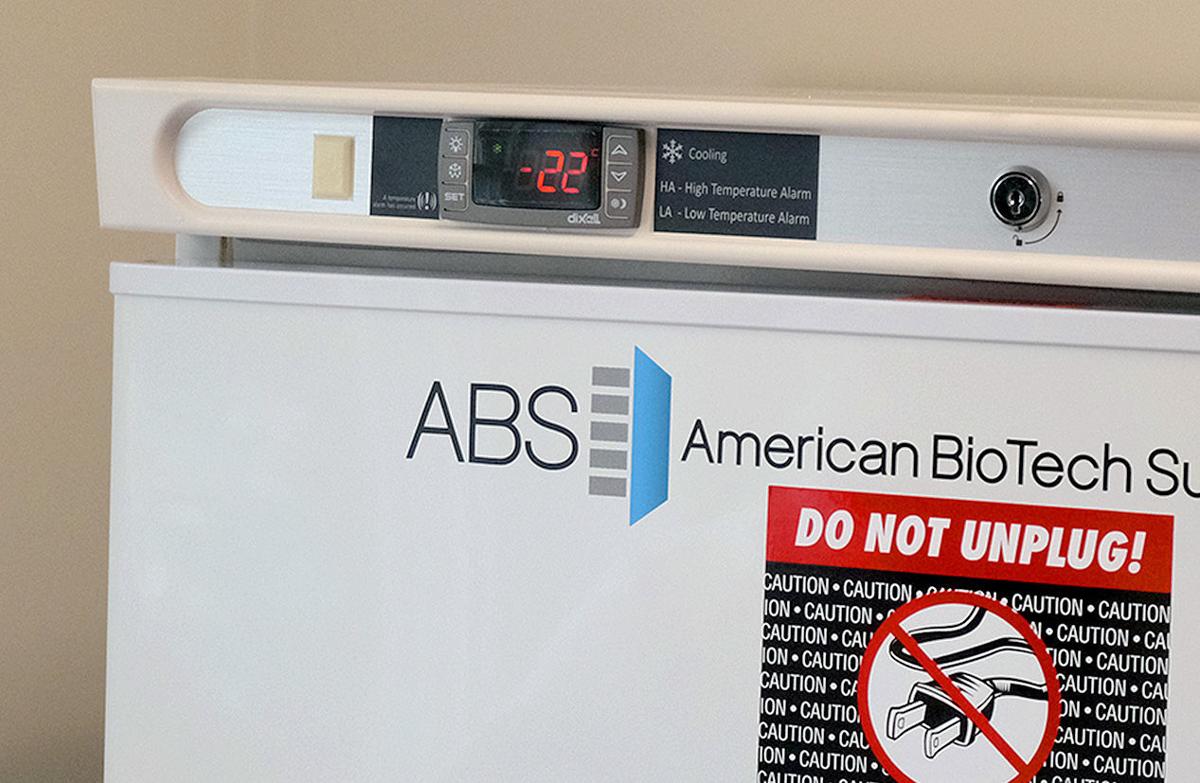 The medical freezer set to -22 degrees Celsius for vaccine storage.

Sandwich Public Health Nurse Joanne Geake (right) talks with some of the staff inside the Sandwich Human Services Building during a clinic to provide COVID-19 vaccinations to Upper Cape police and firefighters on Monday.

A box of the vaccine from Moderna

Sandwich Patrolman Mike Wood holds up a note with the time of his vaccination. He needed to show that note before leaving to ensure he waited 15 minutes after getting the shot.

Recently vaccinated EMS officer Sean Gilrein, at left, and firefighter Scott Thomas, who was also administering the shots, stand on the front steps of the building.

The medical freezer set to -22 degrees Celsius for vaccine storage.

The heads of the public safety departments in Sandwich, along with hundreds of first responders across the Upper Cape, have officially been vaccinated against COVID-19.

Fire Chief John J. Burke said he received his first dose of the vaccine last week, and Police Chief Peter N. Wack was inoculated on Monday morning, January 11, during the vaccine clinic for Upper Cape first responders in Sandwich. The clinic was held at the Human Services Building on Quaker Meetinghouse Road.

“I felt really comfortable with it,” Chief Wack said. “I never even wavered for a second.”

He said a good number of the people in his department have opted to get the vaccine and that most of the people he has spoken to on the topic have always been on board with getting it.

A video released by public health nurse Joanne Geake and town physician Dr. Ryan Bemis discussing the safety and efficacy of the vaccine, as well as the perspective of the chiefs, was a deciding factor for some, Chief Wack said.

Both chiefs said they have not suffered any unexpected side effects after getting their shots and did not have much more than sore arms, similar to the way a flu shot feels.

Chief Wack was one of 92 Upper Cape public safety workers—15 from Bourne, 23 from Falmouth, 19 from Mashpee, 26 from Sandwich and nine from Joint Base Cape Cod—who were vaccinated with the Moderna vaccine on Monday.

By the end of the day on Wednesday about 250 police officers, firefighters and emergency medical technicians will have received their first dose of the vaccine. They will be due for the booster dose in February.

Assistant Town Manager Heather Harper said the building is set up to vaccinate three people at a time.

First responders were directed to make appointments for the clinic. At their appointed time, they entered the building through a side entrance where they were given a brief health screening to check for any health concerns such as COVID-19 symptoms and to see if they were at risk for having an adverse reaction to the vaccine.

After that screening, they were directed to one of three vaccination stations in the building where the shot was administered. Initially, town nurse Joanne Geake was the only person authorized to administer the vaccine in town, but Sandwich paramedics have been authorized as well, adding about 36 people who are able to do the work.

Additionally, several retired nurses were onsite to volunteer their services.

Each patient was given a card with a timestamp indicating when they could leave the property.

Once the evaluation period was over, a police officer verified the timestamp and allowed each patient to leave.

While taking a break from administering the vaccine, Sandwich firefighter paramedic Scott Thomas said it has been a difficult year for everyone.

“We’re hopeful that this will get us back on track,” he said.

Sandwich EMS Officer Sean Gilrein said anyone who has reservations about getting vaccinated should listen to subject experts, do their own research, and talk with their primary care physicians.

“People have to do what’s best for themselves and their families,” he said.

Ms. Harper said all departments that were benefitting from the clinic were also on hand to help out.

On Monday, the Mashpee Fire Department had an ambulance onsite in case someone had a reaction requiring hospital care. Members of the Mashpee Police Department were responsible for checking the vaccine timestamps and allowing patients to leave.

Additionally, Joint Base Cape Cod fire officials were on site with their new Rescue 411 command vehicle.

The process of administering vaccines to a large number of people has been underway for years. Ms. Geake said that Chief Burke, health agent David Mason and herself were all working for the town during the H1N1 swine flu pandemic of 2009.

Administering the vaccine this time around is not much different than it was then, she said. The only difference is the vaccine itself.

The Moderna vaccine is very fragile and is ruined if it is dropped or shaken. The vaccine also needs to be stored at a very cold temperature—minus 22 degrees Celsius—and can be stored in the on-site medical refrigerator for up to 30 days.

“The mechanics are the same,” she said. “The goal is to be safe and efficient.”

Whether the town will be approved to hold a clinic to administer the second dose of the vaccine to first responders or to hold any future clinics for the general public is still unknown.

Mr. Mason said the town is planning for possible authorization and looking at sites that may work for mass vaccination, in particular the former Henry T. Wing School, where a flu shot clinic was held in September.

In the event that the town is able to provide the vaccine to residents in town as the rollout continues, Chief Burke said, officials have been testing the process since May and are feeling confident.

Currently, the vaccine is not available to members of the general public and people are asked to not call the health department looking to be inoculated. The vaccine is being rolled out in phases and the state is in the first phase, which covers healthcare workers, first responders, residents and employees of long-term care facilities, and within congregate care settings.

The second phase is on track to begin next month and will start with people over age 75 and those who have two or more underlying conditions.